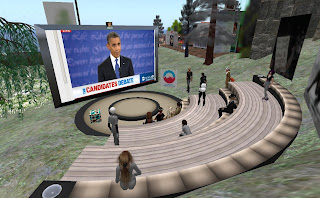 At 6PM SL time on Wednesday October 3rd was the first of three debates between Romney and Obama in the US Presidential Election. It could be seen in two places in Second Life. One was Cafe Wellstone at Pini  (56, 78, 45) a hangout for people advocating liberal and progressive causes, and naturally were inclined to support President Obama. Among the people there was CNN iReporter Any1 Gynoid. Most of the audience who stated so remarked they were watching MSNBC.

There were a number of comments there, such as how Obama has aged in the past four years. Someone wondered if a bingo card should be made up with key words, and the appropriate square checked when it was uttered. More frequent were comments praising the President and not just saying the opposition wasn't as good, but clearly questioning their motives and goals, "Barack is one of the finest Americans ever born. He saved the country after the Republican wrecking crew. ... Every time Republicans win the White House, it's a criminal exploitation of the US economy, start wars, enrich (their) buddies, destroy industries." "(Romney)'s so full of crap already." "He's lying like crazy." "Quit selling out resources to China." "Middle Class Mortgage Deduction - GONE!" "Mittens is a moron." 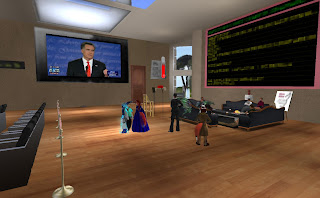 For the politically conservative, there was the Republican Party in Second Life building in Sunset River (180, 198, 23). The humans and furs were watching coverage streamed in from FOX News. Among them was East Coast Conservative's Hatton Hunghi.

Naturally they had the opposite position of the people at Wellstone, criticizing Obama and complementing Romney. "This from the commentary on The Iowa Republican blogsite: Comment From Todd, 'Apparently the President is taking this debate as seriously as he did his Daily Intelligence Briefings.' " "LIAR!" "Oh em gee, hilarious." "Exxon employs 82,000 people ... and does me more good than this President." "Obama is just repeating his speaking points and getting called to the mat for it." "GO ROMNEY!"

Following the debate at the RPSL building, most thought the challenger came out ahead, "Romney should be carrying a broom right now, he swept the floor with him." CNN, streamed by neither location, declared Mitt Romney the winner.