With the events of Second Life's Ninth Birthday a few months ago, last weekend it was it's oldest community's turn to celebrate nine years: Luskwood. Besides the home of the classic Luskwood furry avatars, Lusk also boasts the longest lasting group of residents, not just of Second Life's furs, but of the entire Grid. And Saturday October 20th, the folks of the Big Tree got together to celebrate their staying together.

Hey Folks! It's that time of year again, and for the 9th time, we're celebrating Luskwood's Birthday!  To kick off the celebrations, we bring you the lovely Keeba Tammas, singing hits from the 70s through today!

Stick around after Keeba, becuase at 1PM, Shannon O'Herlihy will be picking up the microphone, and delivering a fantastic acoustic folk set.  Come on down and grab a seat, the fun starts at Noon, SLT! 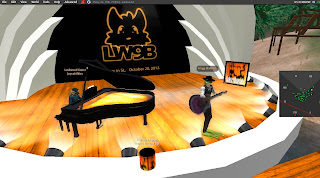 The singers performed not at the tree, but the nearby ampitheather, which was on both the Lusk and Perry sims to accommodate more avatars. Following Shannon was live singer Alazarin Mondrain. Later on came a performance from two musicians whom have performed regularly at Luskwood for years, Jaycatt and Frogg.

As the musicians played, some avatars danced on the floor near the stage. Others sat in the stands and cracked jokes, "is there any LW9B souvenirs?" "Commemorative Michi bobbleheads?" "Michi should be made into a bobbletail." "Or a bobblehat." "Hmmm, Lusk Core bobbleheads n' tails. (smile)" Luskwood founder Michi took the joking around in style. As it turned out, there were commemorative LW9B hats. 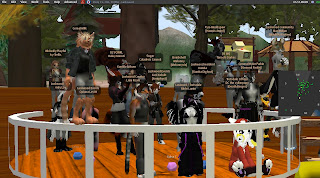 The last live musician was Canon Organizer at 6 SL time, who razzed an organ on stage, and told everyone he was playing from a real one that was practically a museum piece. But still, he told the audience to be ready to be pleasantly surprised, "and now for something completely different," and then began playing the "Star Wars" theme on it, much to the delight of the audience, "Woo-hoo! I love Organ!" "Amazing how much sound is coming out of that one instrument. (grin)" Other tunes included the "Back to the Future" theme, and "Brains" by Voltaire. "That organ might be the ticket to play that 80's tune, 'Freeze Frame' (grin)."

There were a few technical glitches. Those in the Lusk part of the stage kept seeing the Perry sim vanish then re-rezz. Michi told me, "It's because Lusk is on Magnum and Perry is'nt. It's been having sim intercomm problems ever since the 'unscheduled emergency' Magnum roll on Wednesday. … it was some sort of rollback and 'group database' fixes." 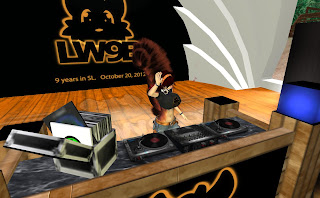 But the birthday went on. Last for the night at 7PM SL time was the squirelgirl DJ Haley Maruti, who rezzed her box onstage and got in, "LUSKWOOD, MAKE SOME NOOOOOOOISE!!" For a few hours, she entertained the crowd with a selection of pop music, from 80's tunes, to more modern fare. "And now for something 'PSY'chotic," she announced before putting in an English "Gangnam Style" remix. When her playlist was done, she told the crowd, "We're into unknown territory now! I planned for three hours tonight, but you all are being so awesome that I can't stop now!" And so she continued to play on as the Lusk residents continued to dance late in the night, the floor changed from a wood finish to a discotech one, with a spinning Lusk symbol in the center.

This wasn't the end of the birthday celebrations. On Sunday afternoon there were some open mike "social events." But the big events had been on Saturday.

"Thank you so much! Happy Birthday Luskwood!"