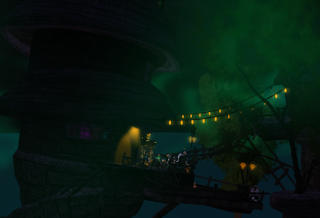 There's no season in Second Life quite like Halloween. With it's thrills and chills and dressing up, it brings out a mischievous side of many of it's residents. For some, the Grid provides the Halloween parties and haunts that aren't always available in real life. For others, it provides more to those who just can't get enough. Second Life Newser's writers have written earlier on some haunts and events. While it's been a busy time for me recently, I was able to show up at a few.

Saturday October 27 was Luskwood's Halloween party. The party was held not at the Big Tree itself, but at one of the clubs in the community's region, one that when viewed at midnight looked particularly spooky outside, one Lusky commenting, "Spooky tree! I love it!" But once inside, the atmosphere was fun and music, with DJ Haley Maruti spinning the tunes, "Time for music boys and ghouls!"


Events at Luskwood often have two problems. One is their popularity results in lag from so many avatars, "So many Luskies to load." With some people taking a while to rezz, there was the problem of running into one another, "I don't wanna shove people." Fortunately, there was a solution at hand, "Just use your minimap and be smart. If your dot isn't on someone else's, you're safe." 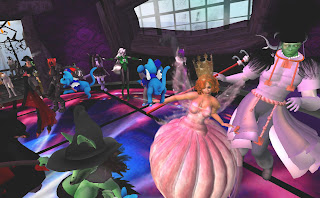 There were a variety of appearances on the dance floor, from a few demon girls, to the Laughing Man from the anime "Stand Alone Complex," to "Doctor Who," to witches, to a "Green Lantern," to someone who made his avatar look like it belonged in another virtual world, "You've gone all Minecrafty!" Luskwood being a furry community, so were most of those attending, though there were several human avatars. At least three of the four Luskwood founders Eltee Statosky, Liam Roark, and Michi Lumin were at the event.

Besides the song and dance, Luskwood was taking the occasion to release a new version of it's Big Cat avatar. The vendor there didn't rezz to everyone, though. and with the lag inevitably people crashed. But the party was a success.

Later on, my partner Jasmine and I went to the Sannomiya Pumpkin Hunt. This was part of a local festival that included events and a haunted house. Jasmine and I went looking for jack o' lanterns. Say "Trick or Treat" to certain ones, they would give you a gift, such as a piece of clothing or jewelry. The event was mostly mildly scary, with a few forbidding sounds and a few scary props. But stumbling upon a frightful sight when rounding a corner at the same time an ear-splitting scream rang out could be quite unnerving.

It's safe to say most clubs in Second Life hold some kind of Halloween event. The management of Club Zero Gravity, however, wanted to make it memorable. The decision was made to hold it "planetside" away from the space station and on a "Haunted Woods" platform. With it's aged wood, spider webs, and surrounded by an image of creepy woods, the place had a definate air of forbidding. Jasmine would be DJing for the event with a set of three hours of Halloween themed tunes. Things would be starting an hour early, at 5 PM SL time instead of the normal 6. 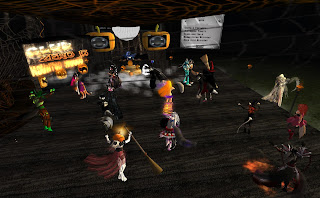 The party took place on Tuesday October 30th, and was a success with a few dozen dropping in on the "spook-tacular" event. This included Angel Estates owner Nydia Tungsten, Club Cutlass owner Jenni Greenfield, writer and Green Meadows Club owner Perri Prinz, and HV Community leader Ranchan Wiedman. There were a variety of appearances to, from witches to death knight, to vampire bat, to pony girl, and more. Among the tunes played were "Come Little Children," to "This is Halloween," to the "Ghostbusters" theme, to the "long version" of "Thriller," to a fun little disco tune Jasmine played for the vampire bat, "Drac's Back."

They're easy pickin's at the discotech,
I leave them feeling like they've been in a wreck.
You know they wake up all wasted, and they never check,
those two small holes that I leave in their neck.

Well if they were wise, they would soon realize,
they're not hung over, they're just vampir-ized.
'Cause Drac's back.

I wanna suck your (oooohhhh .. Dracula!)
Drac's Back! 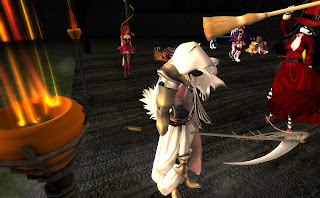 Jasmine called it an especially catchy tune, "Don't blame me if it gets stuck in your head."

There was a three thousand Linden prize available to the winner of the costume contest. At the end, the votes were tallied, and the result was a tie between Ranchen, who came as a wolf-neko, and Kitculia, whose outfit was a spider priestess, and upon the announcement got into the act, roleplaying asking that the club be given a blessing.

Be sure to be on the lookout for some scary fun on Halloween Day. And even after the holiday is technically over, many of the haunts will be up for a few more days, as well as another costume party or two for those who need one more scare before packing their scary avatars away for a while.

To see a list of haunts, check out the official Second Life Destination Guide.