On Wednesday May 8th, the Relay Rockers held another of their "Bid Me Bald" events. Their first one was on March 27th when T1 Radio owner and Rocker Co-Captain Trader Whiplash received the season's first shave. Since then, others have had their moment in the team's barber chair, placed prominently on the team's stage at their beach location. And on this day, Second Life Newser happened to have a reporter on the scene for their latest: Gina Gracemount. 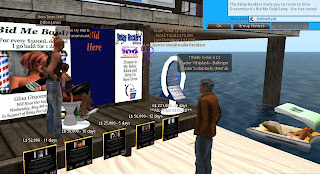 Gina, a Jazz and Blues singer on the Grid, had offered to put her hair on the line, going bald for every 5,000 Lindens raised. With 70,000 raised, this meant a shiny scalp for two weeks. And so wearing a "Don't Panic, Go Shop" shirt, she bravely approached the leather seat next to the barber pole, with Trader playing the 60s tune, "Long Beautiful Hair." Her friend Dillon Janus, whom was already bald, sported the scissors, "Hee-hee! Have a seat."

As she sat on the chair, Janus kept poking his leg when lowering his hand. "Watch the ears!!" Gina shouted. Trader grinned, "Gina, we have sutures handy." "Oh, so you are used to blood then?" "Fiz's ear healed pretty quickly after we sewed it back on." "I feel a sting on my neck! Careful!" 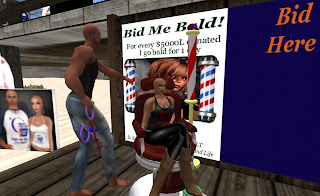 And so the deed was done, one lady commenting, "I hesitate between calling you Britney Gracemount or Gina O'Connor."

But it was then Gina's turn for revenge. Dillon had agreed to go along with her in the "Bid Me Bald." But as he already sported a bare scalp, something else was called for. "Oh, you haven't seen what he's agreed to wear this time," Gina grinned. And so, the guy's shirt vanished, replaced by a black and pink blouse, and his pants faded into the virtual nether, with a frilly poodle skirt taking their place. The crowd reacted with laughter, "Oh *Lawd*, Dillon!" And to top it off, he sat in the chair for Gina to place on him a womens' wig, gluing it on, "A little squirt here, and across the forehead, yep, think you are ready to go!"

The chuckles continued, "and you still didn't shave your legs, (laughter)!" "I love the saddle shoes and bobbie sox." "The chest hairs really set the whole thing off!" "Oh we love you Dillon!" "Now he is prettier than me, (sigh)." "(I) just hope his poodle skirt don't have a lil accident on the carpet!" One girl dropped a bar of soap in front of the charity cross-dresser. With all the funnery, Gina and Dillon joined the Rockers on the beach dancing away.

Despite her now hairless look, Gina gave thanks, "Trader, thank you to you and your team... without you organizing these events, and the effort you put in, we couldn't raise half as much!" She also thanked, "Ms Tina, who has been in personal charge of the 'get Dillon to wear a skirt' campaign (laughter)."

The Relay Rocker's beach location, T1 Radio's Classic Rock Club, is at Arinultra Cay (182, 26, 24). So far this season, they have raised over 1,500,000 Lindens ($6200), making the Saphire-ranked team the second highest in cash raised for the American Cancer Society.