Last weekend on May 12, two Relay For Life teams, Team Shadow and RFL Advocacy, had recently been "skunked" by anonymous donors. So it was decided to throw a second "Skunk Aid" party to raise funds to get rid of the stinky label. 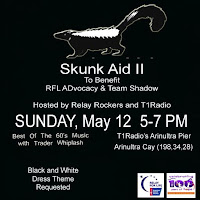 Travel With T1Radio's Trader Whiplash back to The 60s!

Stinky is Back and so is SKUNK AID

Team Shadow and RFL ADvocacy have been infested by Relay For Life of Second Life's Infamous Rodent.  Help Rid Them of THE SKUNK

Join the Relay Rockers as we band together to help our Fellow Relay Teams in their time of need.

Wear Your Favorite Black and White and Get YOUR Cancer Stinks T-Shirts!

Dance to the Best Of 60's Tunes with Trader Whiplash

~ On the Pier at Arinultra Cay ~ 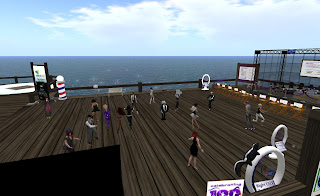 And at 5PM, people began gathering at the beach pier, not far from where the Relay Rockers hold their "Bid Me Bald" events. But there would be no shaves tonight as everyone danced away to Trader's tunes, dropping cash in the "deskunker" kiosks for the two groups, and cheering each other on with numerous wisecracks. Among those there were Dusk Griswold, Holocluck Henely, DJ Madonna, Bain Finch, Panza Eilde, DrFran Babcock, Nuala Maracas, Breezes Babii, and more. Among the black and white outfits, Nuala had her skunk fursuit from the first "Skunk Aid." And there was one Luskwood anthro Skunk avatar dropping in, to join in the sweet smell of comradery.

The donations came in quickly, and just ten minutes into the event, Bain announced, "Oh my, we can take our de-skunker kiosk down and focus on Team Shadow! RFL ADvocacy De-skunked!!!" And two minutes later, "Oooh. Looks like Stinky was already paid off." "Team Shadow De-Skunked!!!!" "Yay!" "Yayyyyyyy!" "Yayyyyyyy!!!!" "We send Peepe packing." 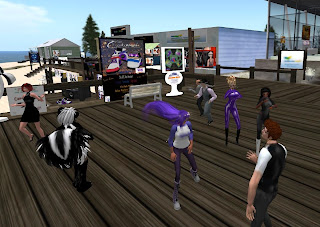 The party went on, with the donations continuing and people congratulating each other for the success. Madonna commented, "YOU are all my heroes. I'm a crazy old woman just trying to do the right thing." Someone's pet skunk cut loose however, "ACK!" "c-a-n-t b-r-e-a-t-hh-e." "Ewwwwwww.....stinky!" When asked if someone made him mad, the two-footed skunk answered, "Hey, that wasn't me." What did happen with the black and white furry was when moving around in the lag, a person or two ended up with a tail in the face, "Sorry."

DrFran Babcock commented later in the dance, " 'So, what did you do this weekend, DrFran?' 'Well, I danced with a skunk, and I raised money for the American Cancer Society by dunking the Emperor of Tiny Empires in a tank. What did you do?' " 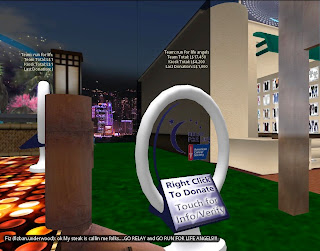 Skunk Aid 2 wasn't the only event that day. Earlier in the day, the Relayers were ringing in a new team, "Run For Life Angels." It was so new, there was just one member. But it wasn't just anyone. Trader Whiplash announced in Relay chat, "it is a single member team, an 18 year old with Lung Cancer and Leukemia who has been sent home because 'There is Nothing More We Can Do.' Please come out here and let's not stop 'til this team has bronze level!" So people went to it's event high over the Lilith sim where it's kiosk where, and chipped in. It wasn't long before the 10,000 Lindens to reach Bronze Rank had been reached, and the donations kept coming. Ariel Goldrozen cheered in group chat, "THIS is how ONE TEAM welcomes a new team to Relay!!!!" Panza commented, "I almost want to tell you to go donate to Running with Angels, and let our skunk live happily ever after." "I'd gladly be skunked to the whole season to help support someone like Angel for the news they we given."

The Relay action continues this weekend with the "Halfway There Fair," and later on the "Home and Garden Expo" and "Paint Second Life Purple."