On the outskirts of the Steelhead region is Mount St. Helens. For those whom were old enough to keep up with the news in the early 80s, the name brings to mind the eruption in May 18th 1980 in which a huge ash cloud reduced hundreds of miles into wasteland. As it turns out, May 18th is the birthday of noted Steelhead resident Tensai Hilra. So what do the Steelheaders do when her birthday arrives? Blow it up. 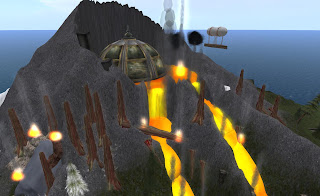 Normally, Steelhead St. Helens looks nice and peaceful with it's top white with ice and snow and greenery all around. But on Friday May 17th, the place had changed. It now had the look of an active volcano with the top half blown off and lava flowing down with the slope full of dead trees. Over the lava-filled crater on top was a dome-shaped structure. And inside, a number of Steelheads were partying it up. "We decided to do it a little differently this year on the mountain" I later heard Tensai explain, "though I'll be sure to blow some stuff up … (grin)." There was also a balloon and gondola sailing nearby.

There were a number residents partying away. Among them were TotalLunar Eclipse, Lumina "Lumi" Elvehjem, Solace Fairlady, Baron Klaus Wilfenbach, and the birthday girl Tensai Hilra. Fuzzball and Eugene Ortega were also there. Rock and Roll Michigan was the DJ, playing songs like "Ring of Fire." When tipped, his jar would ring out, "Thank you (name), now I can afford volcano insurance." With the lack of a proper door, the usual way for people to enter the protective dome was to teleport, though a few found other means. 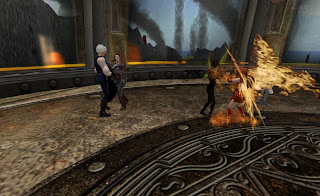 "Hi All! A hot time in the old town tonight!" one Steelheader greeted everyone upon entering. And upon entering, one could see some of the guests were dressed in some pretty "hot" costumes, as demons, fire elementals, etc. There was also a lab area next to the wall, with a chalkboard filled with equations plus some equipment who-knows-what purpose it was used for. Rock & Roll called it, "The Lab at the End of the Volcano" after someone compared it to "The Restaurant at the End of the Universe" in "Hitchhiker's Guide tot he Galaxy."

At one point, CeAire Decosta asked where everyone was when the real St. Helens blew. Lunar admitted he hadn't been born yet, to which CeAire responded, "Thanks for making me feel VERY old Lunar!!!" Thad Caligari told, "I was in Kanas and even we had some ash fall on us early on. … We just got a light dusting a couple of days after, was enough to know it wasn't Kansas dirt."  Willow Leafstorm told, "My typist's brother lived in Oregon at the time and sent me some ash." Hawc Decosta told the crowd, "I worked as a camp counselor at Spirit Lake Boy Scout Camp in the late '60s. It was a lovely area then." 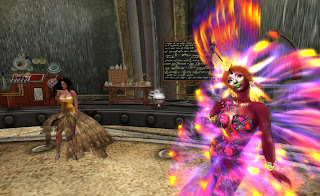 CeAire added, "I was living and working there at the time! We were camping almost due west on Memorial Day weekend when it blew again. Blew the ash so high it went west over the ocean. And as it settled in blew east back to the coast where we were. They shut the roads down because of rain and slick ashy roads. They opened them by necessity on Monday, but boy was it difficult to get home without winding up in a ditch. When I was driving home they kept telling us on the radio to go slow and stay in one lane. There was a build up of slick sludge between the two lanes. A couple of cars ignored the warnings and passed us as threw ash all over our windshield. We had our revenge thought. Shortly after we passed both of them ..... in a ditch off the side of the road!" CaAire had an ash sample of her own, "I collected some ash off the car and had it for many years, but I don't think I have any anymore." 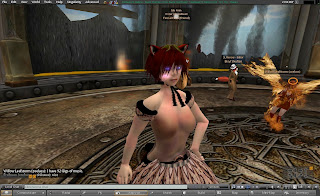 The party went on with some talk about the last show this season for "Doctor Who," a number of volcano and pyrotechnic jokes, and of course warm happy birthday wishes to Tensai.

Eventually, it was late and over time the residents went their separate ways, leaving the volcano behind. Eventually, the lava would cool, and through the nature of mad science, the locals will make it look clean and unspoiled as before.

This eruption looked much like the one in August 2011, which was done because the locals wanted a "Big Bewm." The eruption in May 2012 was different, with a huge ash cloud instead of lava.