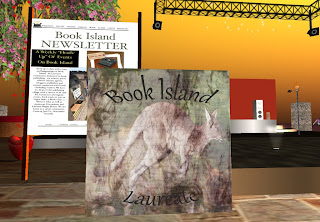 Arton Tripsa stepped down as manager at Book Island after 4 years. There was a party in her honor at 4pm SLT at Book Island on Saturday June 15. I left my avatar at the beach of Dance Island while I went to grab some food beforehand. Selina Greene was there herself at the owner of Book Island. Brokail the blue alien showed up along with Perri Prinz the author of Spectral Shadows who is also the owner of the Green Meadows land club. Danger Dave and Jackson Arthur showed up a little later.

Arton Tripsa wants to leave Second Life to start work on her second book. Hence Selina Greene set up a party in her honor. Izzy Upsilion came after a while and started djing for the crowd. He played a lot of pop and popular music. Arton Tripsa who is Jane Watson in real life is the author of Hindustan Contessa as she lives in Austrailla. 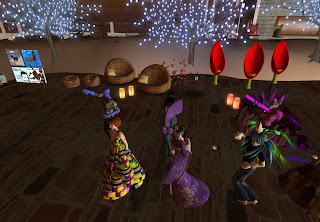 Lots of avatars were dancing and having a good time being silly. Barabara Blackcinder accused Brokali of being sick due to his skin being blue. In defense I said Brokali is a blue alien who will take over the earth and paint everyone blue. For a short time Selina Green spoke on voice and announced that the winners of the laureate awards were Arton Tripsa and Alexander M Zoltai as Alex is the events manager.

I asked Arton about her book and here’s what she had to say, " It is a novel about a couple who travel to India to see the guy’s grandmother and get kidnapped." She adds this sentence as well, "not exactly, more analysis of dual cultures and cultural differences."

Grease Coakes, "Sounds interesting, like 'Dances With Wolves,' how the American solider gets integrated into Native American culture?"

Arton Tripsa, "Yeah something like that. The girl is Anglo-Australian, the guy is Indian-Australian: - ie born in India living in Australia (grin)." 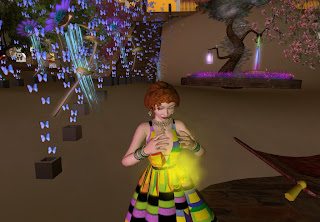 The story idea was inspired a rare photo she had in real life.Well it was a metaphor, the photo showed an Indian child seated on a dining chair balancing on a giant Amazonian lily. It was about balance.

Arton Tripsa, "You got it!"

Grease Coakes, "You mean the prize isn't a door?" (Giggles)

Arton Tripsa, "Lawl Grease!" the guest of honor laughed at my dumb joke.

Barbara Blackcinder won the door prize and no it wasn’t a door. The next question I thought of at random. 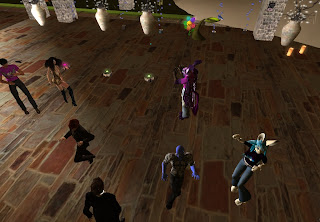 Grease Coakes, "If you could be a furry what animal would you choose?"

Arton Tripsa, "I have a tiny avi who is a calico kitten. (Laughter)"

Before tonight I didn’t know Arton Tripsa from Eyll Tripsa. Her friends at Book Island will greatly miss her. As she leaves Second Life to write her second book but Perri Prinz had this to say, "She'll be back, Grease. They always come back."

Perri could be right there’s always the allure of Second Life. But if Perri was wrong at least Arton got a hell of a farewell party in her honor for her pixel avatar.

For more information, check out the following links: