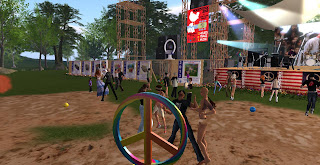 The SL Yasgur’s Farm was the site of a SL Woodstock festival of peace, love and music this past Saturday.  While its RL historic counterpart was held over 3 days in August, 1969, the SL version was held for 12 hours on June 1.     Although both events were filled with music, fun, and good times, the SL version also helped raise money for the American Cancer Society.    At one point I saw that $612,570L had been raised, and the amount was still growing. 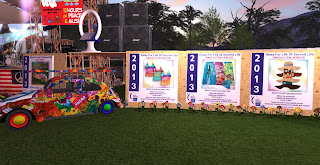 I stopped by a couple of times during the day long festival, and it was always crowded.  Late in the evening I saw there were 74 avi’s on the site, although there may have been more at other times during the day.  SL’s Jimi Hendrix (Charlz Price) was thrilling the crowd with his music and good vibes.     Many folks were dancing while others sat on the grass and listened to the tunes.      A decorated VW was being auctioned off to the highest bidder while other smaller items were available for a donation. 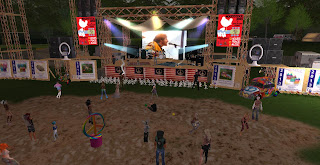 The site had been carefully constructed to pay homage to RL Max Yasgur’s farm.   A barn, an old farm truck, and some animals were located on one side of the site.   There was even a cow that could be milked, which was a nice touch since the RL site was a dairy farm.   On another part of the site was a hippie camp, complete with tents, old VW’s, and a drum circle.   There was even a mud slide for those who wanted to re-live all the memories of that rainy weekend in New York.


A notecard sent out earlier by the Woodstock Production team stated that they would be playing “...every artist that played at the original event. Included are several full performances including Janis Joplin, Santana, The Who and Jimi Hendrix. All music is presented in the historical order in which it was played at the 1969 festival.”   They did, of course, edit some performances for time.