On June 16, 2013, The Second Life Tenth Birthday officially began. Months of planning and weeks of building had gone into the celebration, and finally it was time to begin. The sims had been closed to the exhibitors and performers at Midnight the evening before, and they were reopened to them just in time to get ready for the influx of residents at 12 Noon. 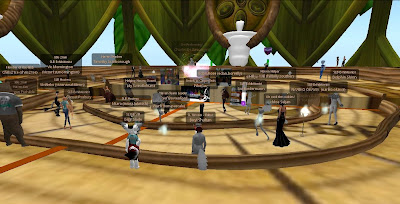 The opening event was a party at the cake stage (the cake itself is hidden in the foliage on the top). The big crowd was divided among the four sims, with nearly 70 packed into one, and the others about as many combined. 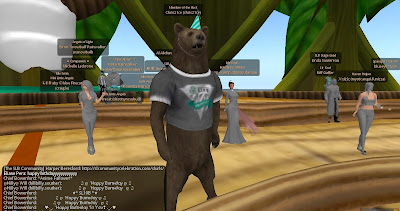 Those attending whooped it up with plenty of gestures and effects. 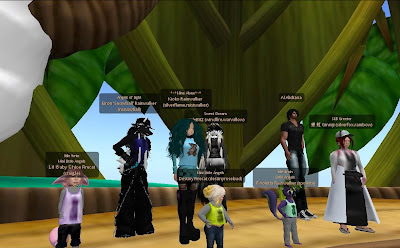 Avatars of all types showed up 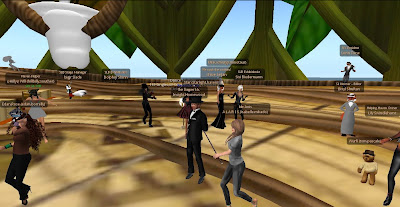 And of various fashions of dress. 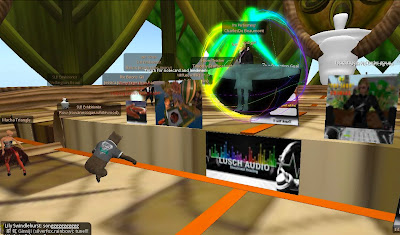 CharlesDe Beaumont was the DJ for the event. "I am getting dizzy in this revolving DJ booth," he called out, "make it worthwile and dance all around me....reduces your lag at the same time (laughter)." When some girl he was chatting with crashed, "Someone help her...the poor girl fainted." 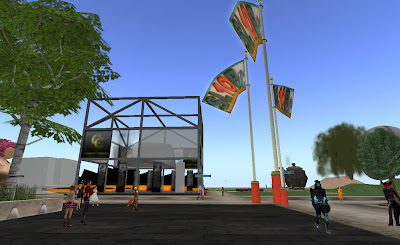 At 1PM was the flag raising Ceremony. There were actually a number of separate ceremonies across the Grid. This one took place in Astonish down the street from the Newser exhibit. 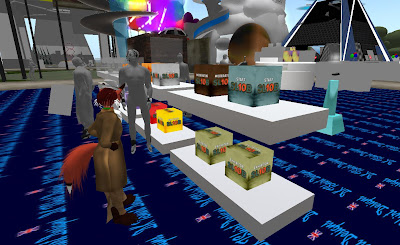 After the flag rasing, T-shirts for the staff, performers, and exhibitors were then made available. Different roles had different colors, with olive being for exhibitors. Security had red shirts, which resulted in a few jokes about avatars getting killed over chat.

At 1:15 was a discussion in the Auditorium. Saffia Widdershins hosted a talk from the "masters of mesh" Cain Maven and Froukje Hoorenbeeke. The chat was held in Voice. 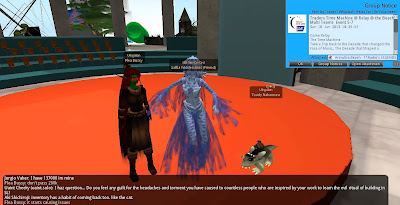 At 4PM SL time, Saffia hosted a talk with Flea Bussy and Toady Nakamura from Grendles, whom had built the Turtle Stage for the SL10B, as well as doing the ignoble duty as the events "janitors." Grendles is known for it's bargain avatars, such as the humanoid jellyfish Saffia sported. A number of subjects were discussed, such as inventory. Toady's other recent project, "I built the April Fool's House at Raglan Shire with Clover Dezno." Flea called it, "a wacky fun build."

There were more than just talks at the Auditorium. There were a number of musicians performing at the various stages, such as singer Maxamillian Kleene and DJ Grease Coakes. 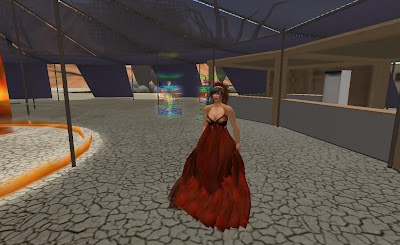 Besides the events at the SL10B sims, there were other events that day. The Burn2 group had a SL10B celebration of their own with Debi Latte singing. Among those attending was artist Bryn Oh. 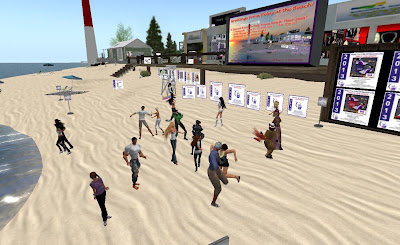 And Relay events went on that day SL10B or no. At Arinultra Beach, members of a few teams danced away. This included Gem Sunkiller, whom a few days before had been in a "Bid Me Chocolate" event.

It was a great start to the SLB, with plenty of exhibits to see, and more events to come. Check the Auditorium Schedule to see (Click Here).