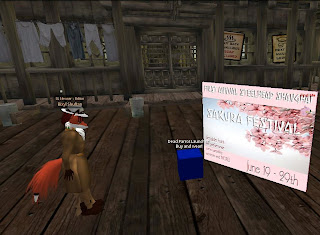 Recently at Steelhead, the steampunk community held their Sakura Festival over several days. Most of the events took place at the Steelhead Shanghai sim. There was a hunt, and some folklore and poetry readings. And for a little action, there was a sumo wrestling event, dubbed "Sumo Sunday."

Come one come all to Sumo!
Part of the Sakura Festival in Steelhead. Come join the festivities and beat each other up while having fun doing so. Starts at 5pm SLT in Steelhead Shanghai.

Sumo wrestling is an old sport, it's beginnings going back centuries in Japan. The rules are simple. The two wrestlers start from crouched positions in the center of the ring, then when the match starts each tries to force the other from the ring without a body part other than the feet touching the floor. Matches are typically quite short, sometimes lasting just a few seconds. But they can go on for over a minute. 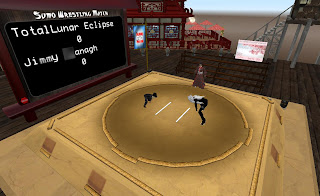 For Steelhead's sumo matches, a scripted ring was placed in Steelhead Shanghai, complete with a 'bot referee, with stands set up to the side for the audience. Of the seats, Tensai Hilra joked, "custom is to throw seat cushions after a match, but that broke, so throw whatever you got (grin)." There was a "dead parrot launcher" that got used a time or two.

Those taking part had to touch the board for a "pusher" attachment, which was worn. Then they would touch the two white lines in the ring to crouch. When the ring gave the signal, the participants would charge at one another. As in real matches, some ended in seconds. But some went on for a while. There was also a technical glitch. If a larger avatar was up against a smaller avatar, sometimes the bigger one would go flying up into the air. Landing outside the ring in this matter was not considered a defeat, so after flying up in the air a wrestler could get back in. As the matches went on, the wrestlers began to use smaller avatars. 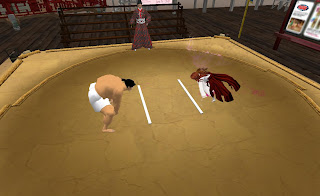 One of the more talked about bouts was held early in the event. Steelhead owner TotalLunar Eclipse went up against street urchin Jimmy Branagh. Lunar boasted, "If I lose the sumo match, Jimmy Branagh gets to be mayor for a week." As it turned out, Jimmy turned out to be a more skilled fighter than expected, "He's small, but he's scrappy." Eventually, he won the majority of the bouts, and the match. Fuzzball Ortega's reaction was to groan, "I'm moving to Caledon." Jimmy took the key to the city with a grin, though made no boasts about what he would do with his newfound position. 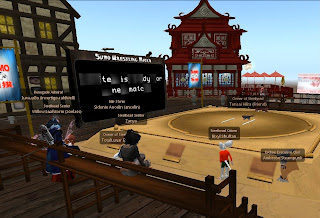 Yours truly got into the act with a freebie sumo wrestling avatar up against local Willow Leafstorm. But with her smaller fairy avatar, the result was the bulkier avatar ending up flying into the ring. So I switched to a small mouse avatar (Luskwood Bunkie), one not much taller than a "tiny." I won a single bout, but Willow got two and the victory. Tensai then challenged me in a small avatar of her own, "Cat versus mouse." While the mouse beat the cat once, in the end the rodent left the ring bested.

The matches went on for about a couple hours. In the Steelhead community meeting a few days later, they were declared a hit and a success, with lots of fun and laughs held around. There was no word on what Jimmy Branagh was doing as "mayor."

The Festival goes on until Saturday June 29.

In real life, professional sumo wrestlers live highly regimented lives, with matches having much tradition and ceremony. For instance the leg-stomping actions wrestlers do on entering the ring is actually a ritual to drive out evil spirits. But there is also amateur sumo, which is more worldwide and lacks most of the old rituals. Professional sumo wrestlers are not divided into weight classes, though a skilled wrestler can still beat a much larger opponent. Amateur sumo is divided into three weight classes plus Open Weight (Wikipedia entry).