The name Luskwood means different things. To some, it's a social platform where one can pretty much count on someone always being there. To others, it's the original furry avatar company, the one who laid the groundwork for all others and is still around. To another group, it's the oldest furry community in Second Life, possibly the oldest community of any avatar type still around, and where many furs (and a few not so furry) got their start in Second Life. Luskwood is all of these things, and more. And it recently celebrated a milestone very few places in Second Life can boast. It was ten years ago when the place came to be. And on October 19th, Luskwood held it's tenth anniversary party. 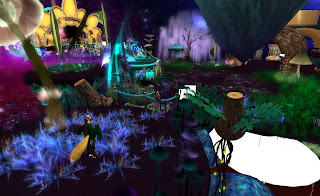 The celebration wasn't held at the Big Tree, but was held on a special platform over three thousand meters high. Designed by Eo Fenstalker and Kumba Digfoot, the place had a trippy, glowly look that was set at nighttime. Aside from the avatar vendors there, presumably partily to keep the illusion of this being the regular place transformed and partially for anyone wanting to make a purchase, it looked very different from how the Big Tree usually is. And indeed not having checked the landmark, my first thoughts were wondering what had happened to the place.

A small entrance platform was connected to a main platform much like the one on the Big Tree, which was connected to a stage platform. Live music acts performed on the stage, while DJs performed at the main platform on a glowly DJ booth. The crowd mostly followed where the music was. There was a box of glowsticks for people to take one, which added to the rave-like glowly light look of the place. There were also some free hats to take, a tenth anniversary baseball cap, plus a "fox hat" that resembled the top half of Luskwood's symbol. 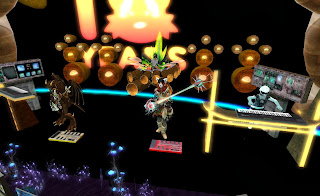 From Noon SL time to 1 PM, Keeba Tammas performed on stage, followed by David Csiszer from 1 to 2PM. From two in the afternoon to 3:30PM, Alazarin Mondrian and the Invisible Band was on stage. After a brief intermission, the action moved to the main platform at 4PM where DJ Zairo performed. At 6PM, the crowd moved back to the stage to see Shannon Oherlihy on stage. At 7PM were Jaycatt and Frogg, who do live performances at Luskwood every month. Following "Effnjay" at 8PM was squirrelgirl DJ Haley. And from 11PM to 1AM, DJ Soul spun the tunes late in the night. 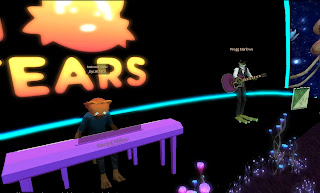 The place was packed with over fifty avatars in the sim while I was there, and presumably it was so during the whole time of the party. There were furry avatars of all kinds, Lusk and otherwise, including some heavily modified such as an eight foot tall huskygirl. There were also a number of pony and human avatars present. Present were the four founders, Arito Cotton, Eltee Statosky, Liam Roark, and the popular Michi Lumin. Most were there just part of the time, but Michi was around the whole time I was there.

There were also a number of Luskwood's "Core," or helpers present, such as Furry Rosewood, Tengu Yamabushi, Dougal Jacobs, and Ardy Lay. Beatfox Xevious, known for his design of flexible tails when they were new on the Grid, had been taking a break from Second Life, but made an appearance at this special party.

As the party went on, there was quite a bit of chatter and jokes. The "fox hat" became a source of humor as people playfully debated whether  or not it was redundant for someone in a fox avatar to wear one. Then Michi put one on, but not wanting to part with her top hat put the second hat over it. The result was hilarity, "Oh my God! Michi's hat is wearing a hat! IT'S ALIVE!!!" And some hilarious stunts in the past were brought up, such as "Dougal's Milkshake." 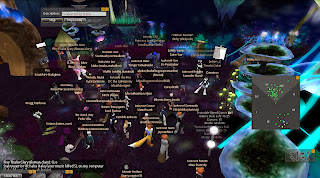 And like many times before, prizes were given out in this anniversary. These were Linden cash prizes given out at random, and usually with a humorous comment. They started out small, at 100 Lindens, and as time went on, the amounts went up, from 250 to 500 Lindens. After 9PM SL time, the prizes became 750, and then one thousand Lindens. After Midnight SL time, five people who stuck it out were lucky enough to get 5000 prizes, Lily Rothschild, Slicky Oh, Braya White, Starywarrior18 Resident, and Viener (Vienersnitzel Resident), "It sounds a bit wrong to say i'm paying L$5000 to a Viener (vienersnitzel), but 'ere it is." 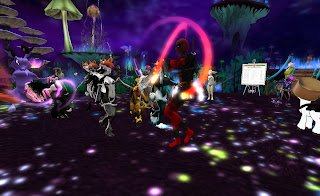 Michi and I talked a little via IM. Michi was busy as the popular skunkgirl is often deluded with dozens of calls, but she talked a little, part of the conversation allowed on the record. Of the original Lindens all but gone from the Lab, Michi commented there were "four Lindens who still know who we are, but I'm sure most of them are rank and file and don't know or don't care what's going on inside. … though 'We're all in this boat together.' So, so it goes." She did promise to protect Luskwood should the Lab's intentions to the residents becomes antagonistic, "I never think anything is a dead end, and I don't quit until its over. … I have a bit of a track record of being a bit of a pit bull and not only in the SL domain.  Whatever comes to pass, I won't take it laying down."

But for the most part, such issues were put aside for the happy occasion. After the last DJ hung up his speakers, Michi was there to put up a stream, "I think we're officially wrapping up here soon. … We've wrapped up but folks are welcome to stay." Dougal pondered the time, "Ten years is 3650 Days. Ten Years is 87,600 hours. Ten years is over 5 million minutes." One quipped, "Add 2 days for leap years, Dougal." "In ten years, the Voyager 1 spacecraft has travelled over 3 billion miles, nearly the distance from Earth to Pluto." There seemed to be signs of a griefer in the distance with a screen-crasher, but it was too far away to affect us, "At least he waited until the party was over." 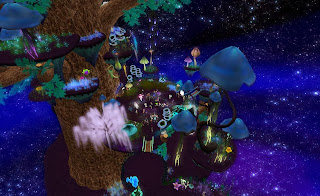 It was about this time someone noticed among the late partiers was one resident just a couple days onto the Grid. He was happily welcomed to Second Life, and he commented he already had a fantastic beginning. Dancing near Michi, someone joked about the irony of a newcomer dancing with one of Lusk's Founders, an "old and the new" scene.

The comments continued, "I'm glad I managed to catch the whole thing, and stay to the end." "Thank you all for coming out and celebrating ten awesome years!" "Thanks Lusk for making this party possible." "Thanks for creating beauty... not just visually, but between folks' ears." "Thanks to everyone who came and took part in our celebrations with us." "Yes! Happy 10th! Everyone who's put so much of their lives into bringing us wonderful times." "Tenth Birthday is best birthday!" "Happy 10th Giant Tree!" "Great stuff guys, never seen a party like this in my admittedly limited experience on SL. Thanks for putting it on." "Thank you everyone for the fantastic party all day! Happy 10th BDay Luskwood!" "Congratulations on a Decade Luskwood!" "It was a lot of fun. Thanks to all the DJ's and Lusk for making it happen." 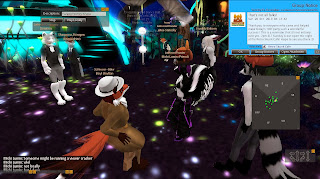 And so, most of those remaining began to head off for bed, "See you all in ten more years. Or is 25 the next big number?" " … if I survive that long I'll be glad to raise a toast with you!" Michi reminded, "There are some things going on tomorrow, like open mic night (smile) and yes, thank you to EVERYONE and everyone who's been a part of this community!"

There was an art show at the base of the big tree, and the next day was a two hour "Open Mike" show at the Retro Skunk Cafe. But these were small compared to the bash that had taken over a dozen people at least to pull off, and attended by who knows how many residents throughout the day. But for those who couldn't make the big bash, or miss the festive feeling, Lusk will be having it's Halloween party on October 26 (warning, Lusk vampire bats have a bite animation already built in).

Luskwood's faced a few challenges over the years, from human avatars who question why a mostly furry place should be right on the mainland (and several sims east of Bay City, to other furries who grumble about the enforced PG atmosphere, A Lab that seems more and more distant, and of course the griefers whom can be so numerous I've heard one Lusk regular joke you're still a newbie at the place until you've witnessed at least one. But the people have handled it all. And so, the Big Tree passed a milestone made only by a handful of sims, and probably the first that has maintained a thriving community.

"Happy 10th Birthday Luskwood!"
Posted by Bixyl Shuftan at 6:00 AM