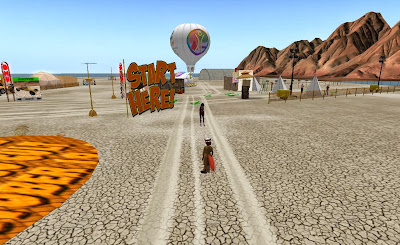 October 17 was Press Day at the Burn2 area. Bloggers and newsletter writers were invited to come by for a sneak peak. And in the corner of my eye I saw a few such as Inara Pey. I arrived a bit late to be part of a tour group. But there was plenty to see. 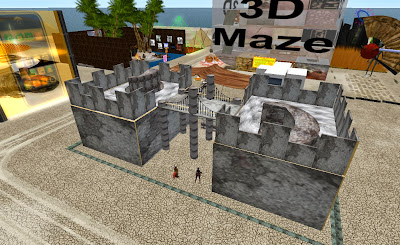 Almost right away, I ran into one builder: Alexi Denortak (Shawnna Chrome). Alexi showed me her paper-mache castle in Burning Man-Elko, "good thing it never rains in the desert," two towers connected by a bridge. 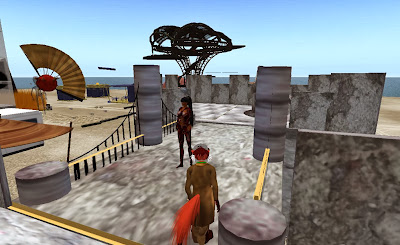 One could pick up a copy of Alexi's castle, "buy" it for zero Lindens, as well as the couch and top hat inside. 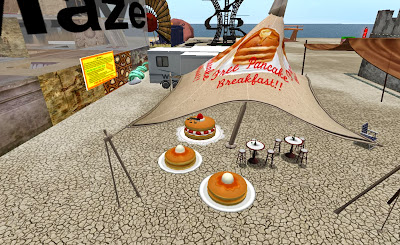 Nearby was a "Pancake Breakfast tent." By the looks of one set of tables, the owner heard about the Tinies' reputation for a great love of waffles. 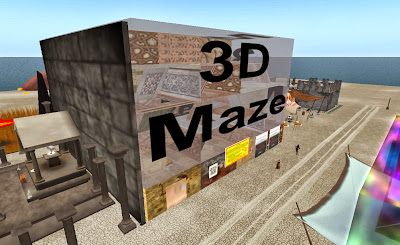 And there was the 3-D Maze, this year's theme being Ancient Egypt. 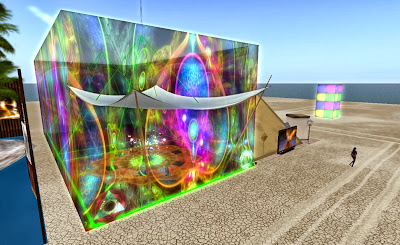 This place looked real colorful and trippy on the inside. 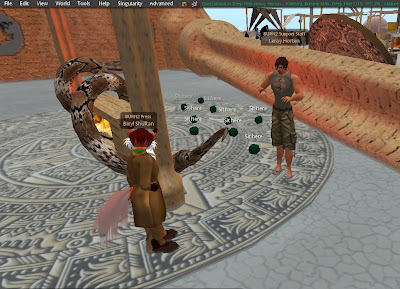 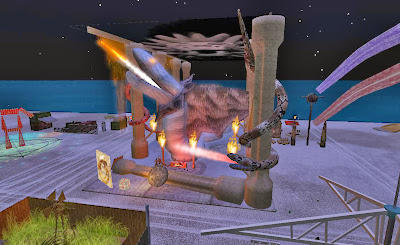 Quetzalcoatl was an Aztec god whom a provided notecard depicted as nurturing human civilization, which fit in nicely with the Burn's "Cargo Cult" theme, and condemning human sacrifice while promoting self-sacrifice. The build was best viewed at midnight, in which the light effects were best seen. The parcel stream played Mesoamerican music. 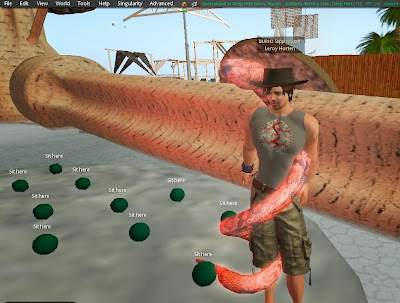 Besides the notecard, one could pick up a t-shirt and a wearable snake. I asked Leroy how might he react if a group in anthro-reptile avatars came to see his exhibit. "That would be cool! I'd love it!" he responded.

"I have had a problem getting some of my friends to come because they hate snakes!" Leroy laughed, "I take it as a compliment as I hope they think they look real enough." The tail on the bigger snake and the head of the medium sized ones move a little, but Leroy's working on making it look like the snakes breathe. 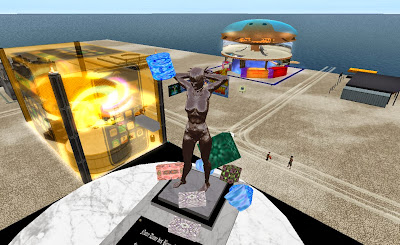 Nearby was a tall statue of a nude (PG) woman. When touched, packages would rain down on her. After a certain amount, she would sink to the ground in flames. A plaque in front explained the exhibit's theme. 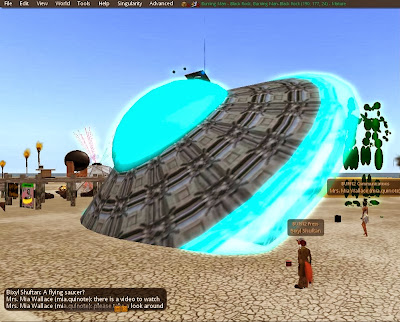 Following that, Mrs. Mia Wallace (Mia Quinote) invited me to her exhibit at Burning Man-Black Rock (190/177/24). "Welcome to John Frum's little home," she announced when I got there. The build was a flying saucer stuck in the sand. 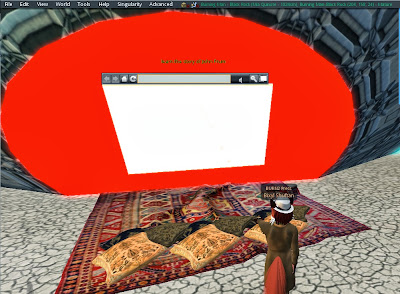 Mia directed me to the back, where there was a display for a youtube film, "I filmed this story told by Danger Ranger on the Black Rock City Playa this year." She reminded me that Danger Ranger was a co-founder of the Burning Man festival. "This video is well, the story of John Frum and the playa." If one can't see the video inworld, one can get a link to see it on one's web browser. 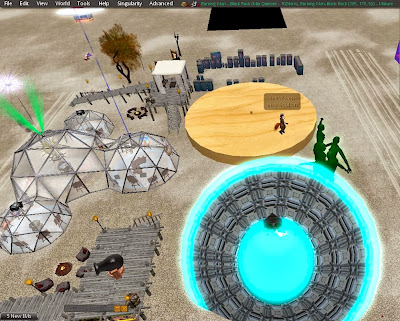 Two objects will send you upward, one to over over the saucer. The other will have you standing on top of it to open a box, "Meet John Frum. ... when you watch the video, you will get the connection."

And what's in the box and video, well, you'll have to visit the exhibit to see for yourself. 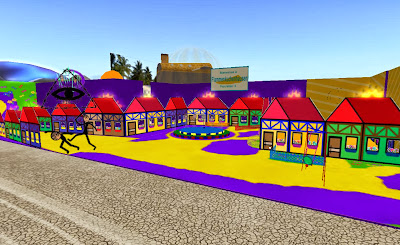 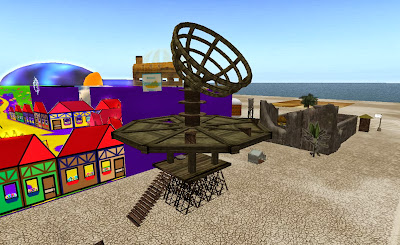 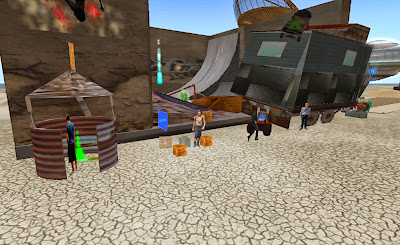 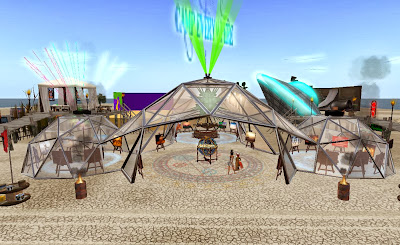 Mia then directed me to Camp Everywhere, where there's a number of pieces of 2-D art. She called for it's host, DocLivingston Resident, who soon arrived. 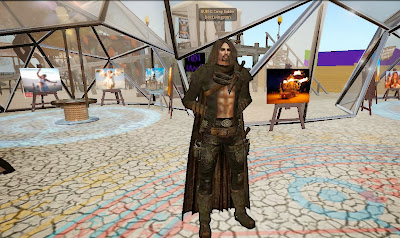 "Welcome to Camp Everywhere," DocLivingston greeted me, "I am a real-life Burner for eight years in a row, and a three year Regional Contact for the real-life Burning Man." He had heard of the festival, but it took a friend who told him, "We Need You There!" So I loaded up My Big Sound System a couple months later and a whole bunch of camping stuff and headed to the desert, 'Wow,'  my whole life changed in that Moment."

At the real life festival, there is also a Camp Everywhere, "It is Built by the Regional Network all over the world." In Second Life, it was a little different, "it's a place to come and Learn about the real-life Burn and to meet the people who help to run it."

How was it being a contact for the two festivals? "Mostly amazing. Defiantly when its all said 'n done, it is worth every bit of effort." He did feel it was "sometimes frustrating to me ... but, the people are the same, Beautiful, Loving, Passionate, Currious, Generous, Willing to Help each other."

"I had a transition I had to make deep inside my soul," Doc explained, "yet a learning experience I would never take away, one that tought me that ANYONE can be a part of a more Beautiful World whether it be at the real life Burn or a regional burn around the world." 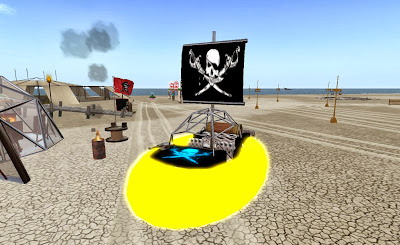 Of Burn2, "I am blessed to have met soooo many amazing people." For Second Life Burners who had yet to go to Burning Man, he recommended they talk to someone who had first, "get an idea of what to expect from several peoples experiences."

DocLivingston was proud of his mutant vehicle, "my Art Car the Yellow OyStarrrrr." He had yet to see much of this year's exhibits beyond Camp Everywhere, and was looking forward to experience what the artists had to offer. 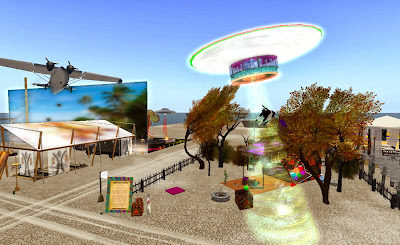 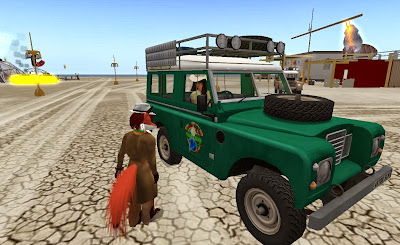 I was looking for one final exhibit before calling it a day, Ub Yiffu's. Fortunately help was right there a minute after leaving Camp Everywhere, and she told me where to go. 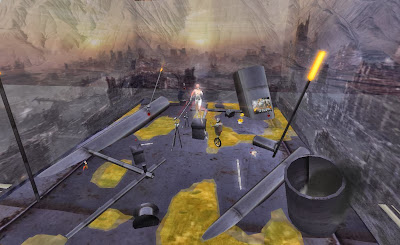 UB Yiffu's exhibit, "Flesh Dreams," definitely had a post-apocalyptic look to it. 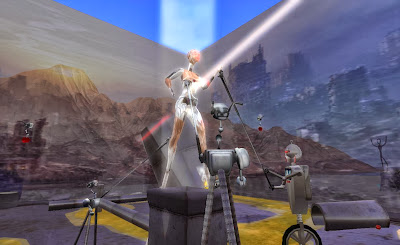 There were a few ways to interact with parts of the exhibit, so come by and see how.

And with that, my Press Day came to a close as events in real life needed my attention. Don't forget to come by Burn2 yourself. The festival starts Saturday Oct 19.