On Sunday Sept 29, Tuna Oddfellow and Shava Suntzu launched their first performance of the Odd Ball in the virtual world of InWorldz. The event took place just after Noon SL time and InWorlds time. Jana Kyomoon performed live music for the crowd. 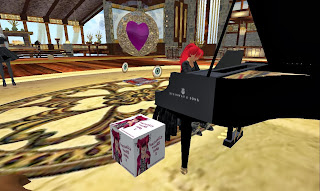 In the moments before the show started, Tuna and Shava's club looked much like it had when I was there a few days earlier, save for the piano where Jana was playing, and the huge magician's hat that's been the center of every Odd Ball I remember. A number of people showed up, sometimes one just after the other, "hope you don't mind me landing on your head." Some had longtime experience with InWorldz, others had shown up for only their first time today.

Then Tuna announced the start, "Welcome everyone to the first ever Odd Ball in InWorldz." And then things began to take shape. First the club vanished and the floor turned psychedelic shades. Then all around us, the sky turned kaleidoscope colors. The Odd Ball was back, and it was just as trippy as before, "it's a carnival ride for the mind." "Sure am glad I not did drugs in college. I wouldn't know what is show and what isn't." 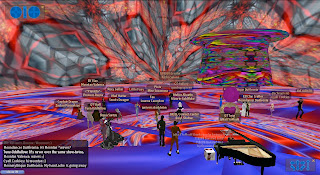 Shava tried to explain the way the special effects worked, "The theory is that your brain's wiring for estimating space is being tricked into reframing the frame of reference, as though you were on a carnival ride, or as though you had entered a vaulted space like a cathedral or domed space in a big building, or were looking off a mountain top. There's a moment of a feeling of pure awe that our brains give us when we can't compute a space like that, left over from the reward our brains give us in childhood when it's so important that we master spatial relationships in play. That's our theory."

A few people had a little trouble with the sound, but not usually for long. And it took a while for some to get dancing with the animations in a whole new Grid. And the psychedelic colors had an effect on some people, "Oh my God, I'm getting dizzy." "Wow, couldn't find my mouse pointer for a sec." "Ohh this iss grreeaat." "Hey, try moving around in this." But everyone had a great time there. "If you know me in SL," Tuna told the audience, "please friend me here. If you know me here, please friend me here.- it's really that simple." 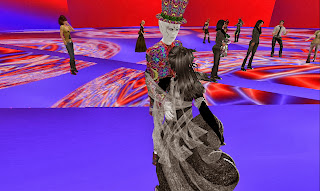 Tuna was happy that he was able to have the Odd Ball so soon after closing it in Second Life, "It took me years to deveiop our show. I am amazed we recreated it in days." "I'm surprised you got it up and running this fast too," another responded. Shava told, "We got it all working, you have no idea how hard Tuna was working on this this week! And Quadrapop has been so helpful and so many folks here too!"

People discussed what they had done here, "I think after 4 years I've got more stuff here (smile), certainly got a better avi." "Well, I could have never built Replicant City on SL. So that is a tremendously good trade-off." "With the exception of the shoes and hair, everything I'm in is either self made or uploaded from samples online I found." "First thing I did when I got here, made an RLV collar. (grin)" 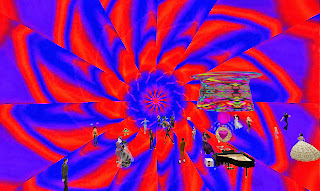 People also discussed what others were doing in Inworldz, "Have you seen Wizard Gynoid's experiments with linkage geometry here? 80,000+ linked prims ROTATING!" "Here we can actually have single-object mega starships. Not to mention single-object ocean sailing ships."

Eventually, the hour was up, and the show was over. The triply effects soon faded, and the club was back, "Well folks, we've come to the end of another Sunday Odd Ball! We'll be back tomorrow at 6pm with more tripped out brain candy." "Thank you for the music that was awesome." "YEEEEAAAAAAAHHHHH TUNA!" "Really do appreciate your support," Jana told the crowd, "and again a BIG congrats to Tuna." "Great time everyone and WELCOME TO INWORLDZ TUNA & SHAVA!" "Kewl show & really nice people doing it."

Shava commented, "So many people we know were already here -- both worlds or you know, we've been dual citizens three years. But a lot of folks came over first time from SL just for today and probably more for tomorrow's show. We do two shows every month with Jana this time of month, and we didn't miss them just because of this." There would be another show scheduled for Monday at 6PM Pacific/SL/InWorldz time. "This is only the beginning," Tuna told the crowd. 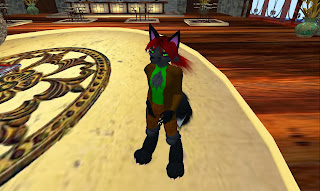 Before the crowd dispersed, Quadrapop handed me something: a "Wingless" anthro Fox avatar. I could look foxy again! I had to change the color of the hair, but there was no arguing with the price. Finally a foxy look.

As it turned out, there was an event in Inworldz just after the Odd Ball. Bain Finch and Panza Elde from the Relay for Life were there at a dance party, and invited me over. And earlier, there had been another. "Bixyl, you missed the fun this morning," Panza told me, "Sailing event. I ended up on the rocks." "Ya, you missed Panza's driving," Bain mused. The dance party had a number of Tinies there, some from Raglan Shire, which has a presence in Inworldz. I was also told that in the past week. a large number of residents from Second Life  had come over, notably content creators.

There was other thing I noticed. Lag was less in Inworldz than in Second Life. At least this was my experience with an older computer. I also didn't crash any. A few residents from the Odd Ball did seem to have some problems, though. SO the switch wasn't an improvement this way for all.

"Thanks for being our Tunaverse – can't have a consensual hallucination without the consenting!"