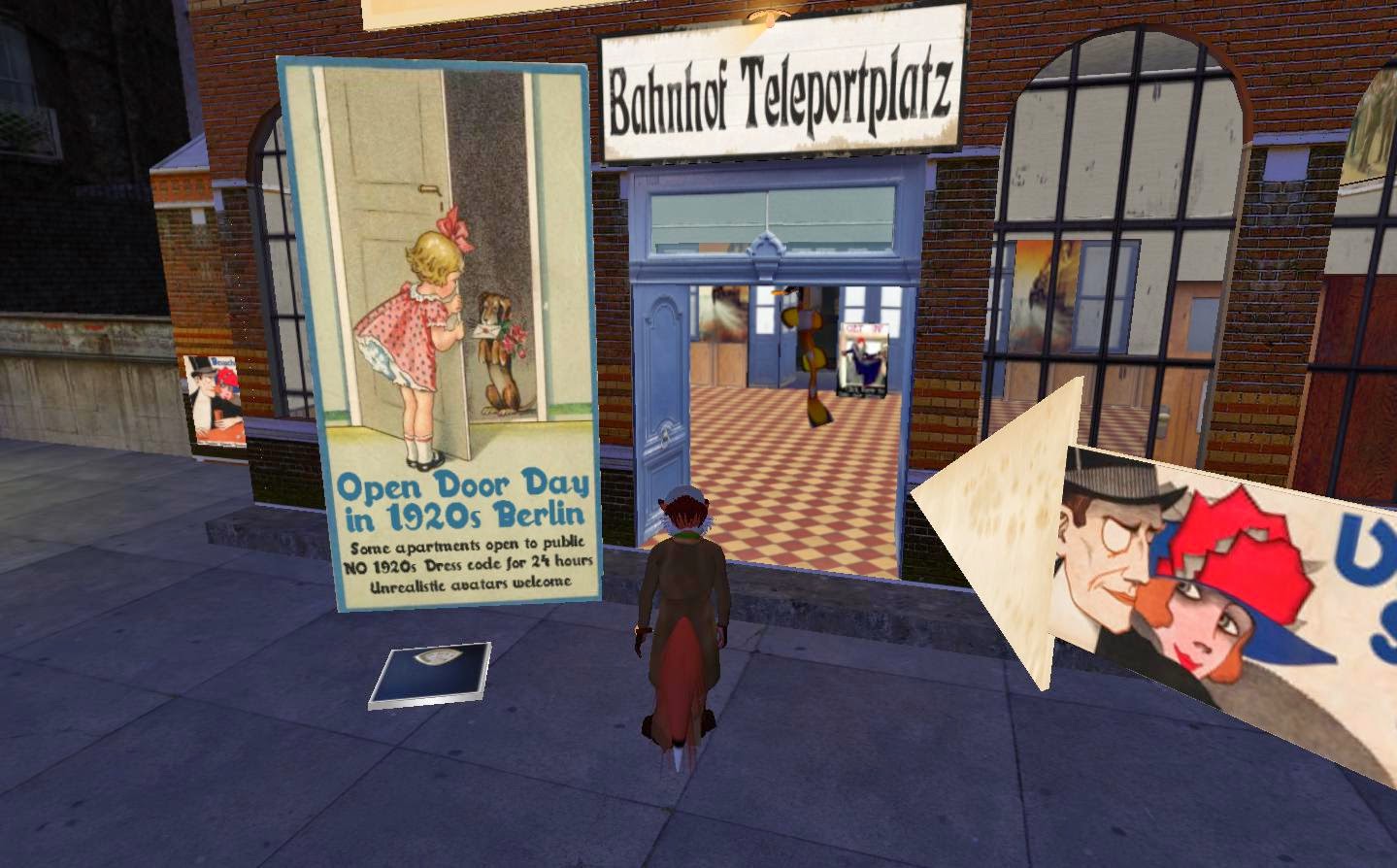 On Thursday May 29, The "1920s Berlin Project" held it's "Open House" as part of it's fifth anniversary events. Normally closed to nonhuman avatars, it was open that day to them.

On this day everyone is welcome to visit our sim ‘as they are’, with other words, you can ignore our strict 1920s dress code and you can also use non human avatars. Several of our tenants will also open their doors and an ‘Open House’ sign will show you where you can enter and explore how the people in the city live. 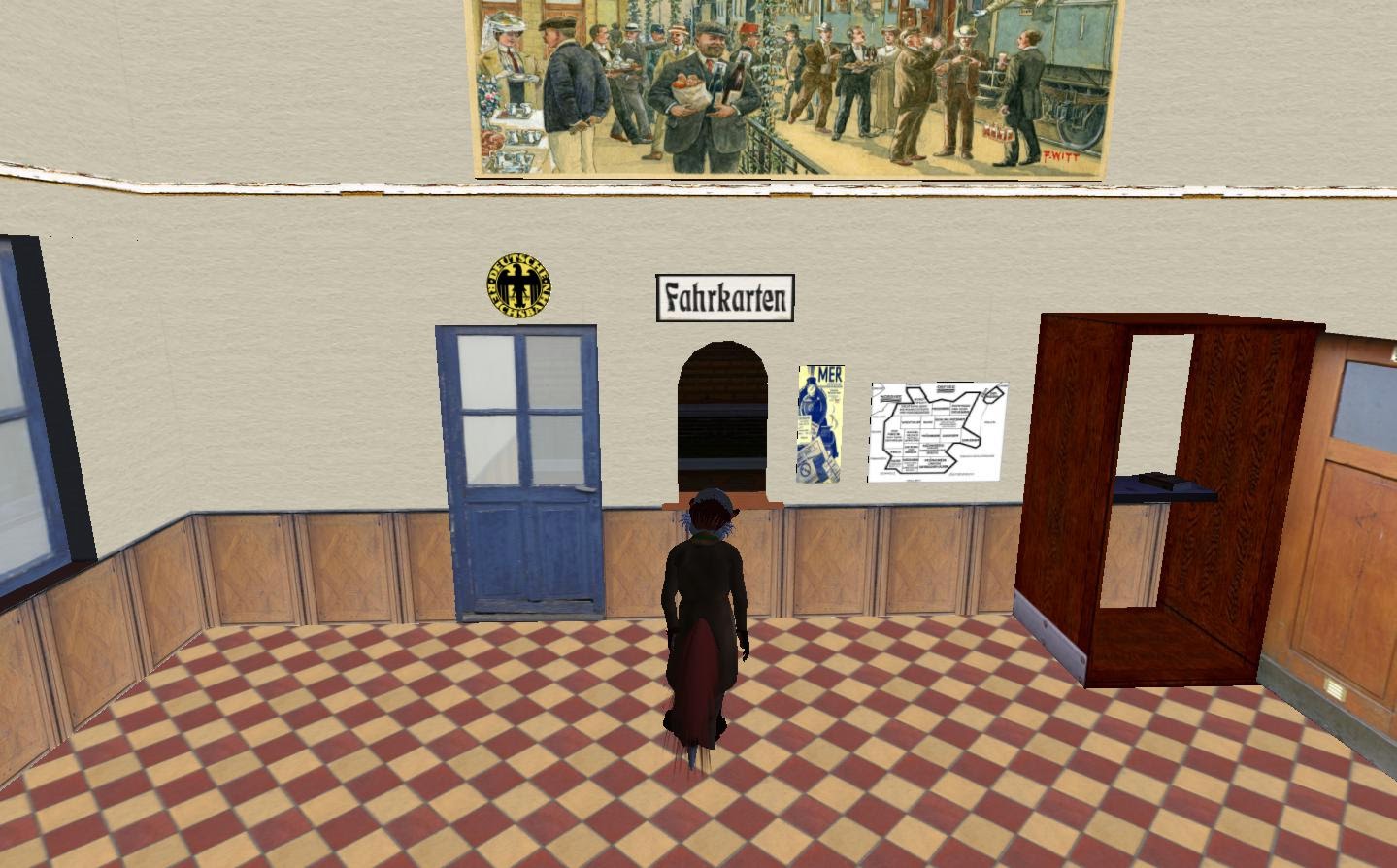 Near the teleport entry was a train station, which I used to go further into the city. 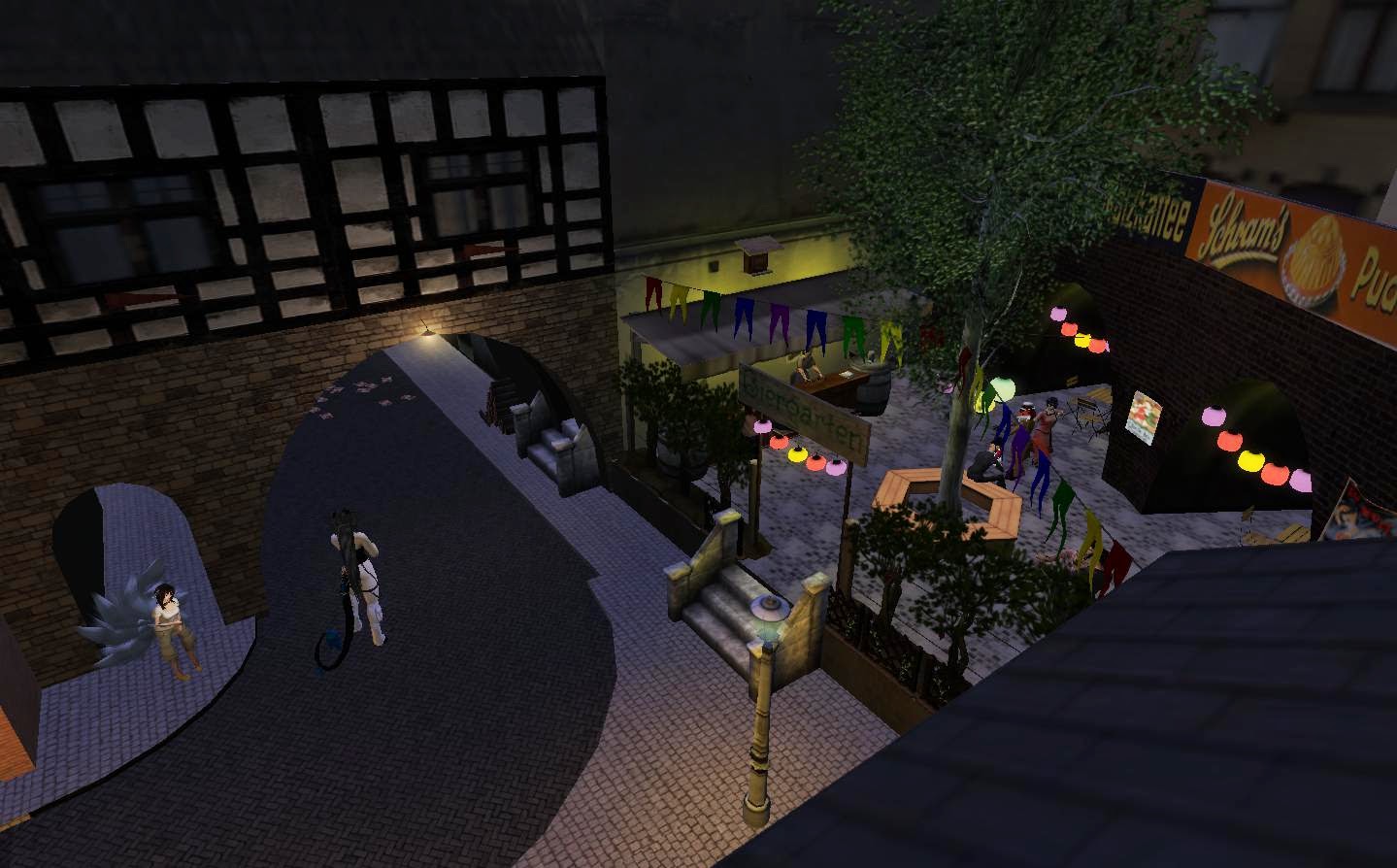 Looking around, I found some activity at an open-air cafe. The radio played music of the time period. 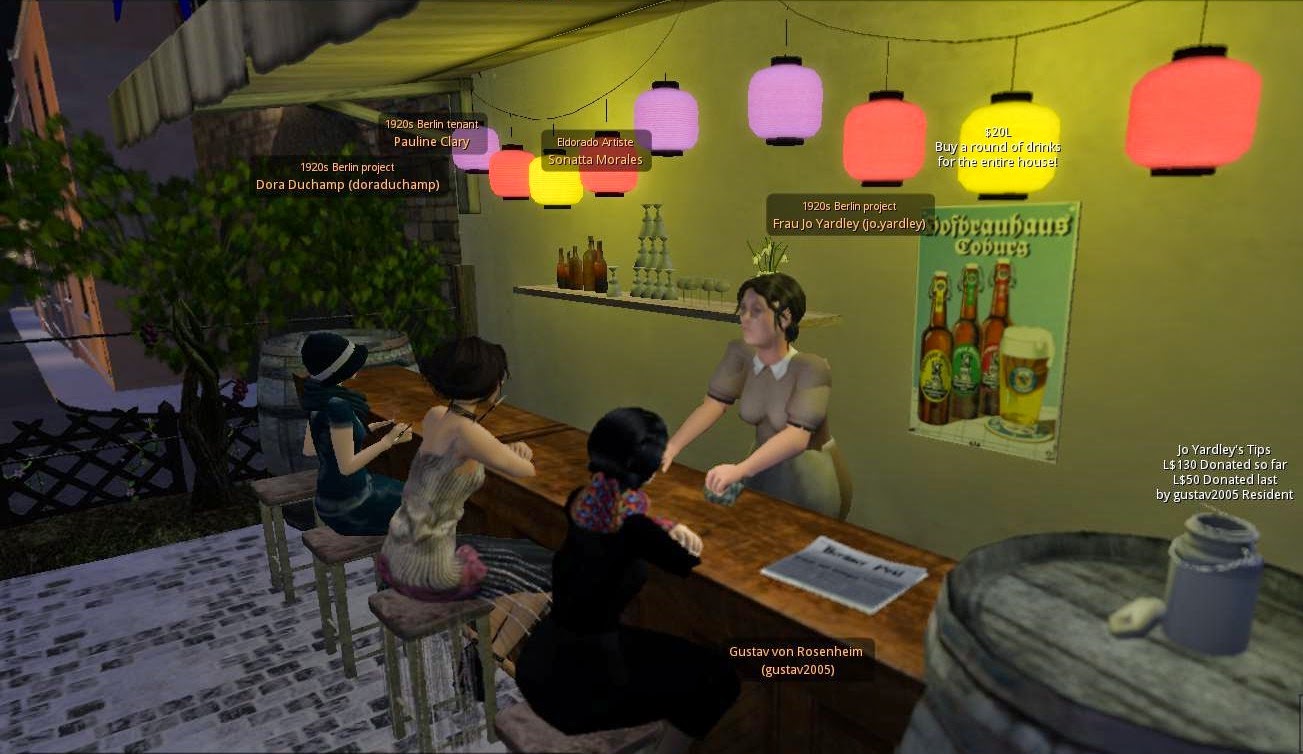 Both local residents and visitors were there. Community owner Jo Yardley herself was there serving drinks to everyone, both those in respectable positions, and even once dancer in "that vulgar Eldorado club." There was a tip jar people could drop a few Lindens into. 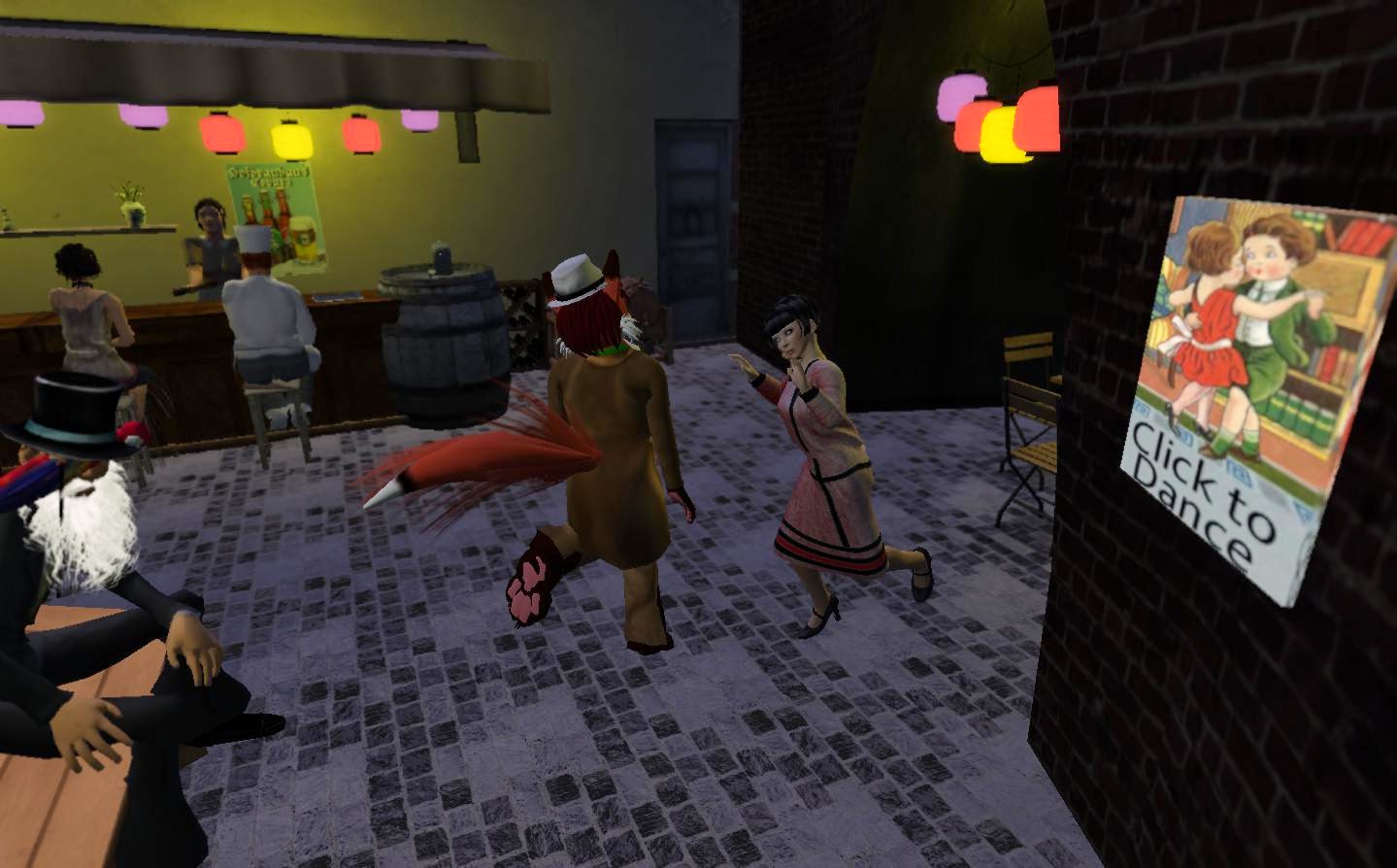 Besides sitting down for a "beir," one could also dance for a bit, "Well, now I can say I (am) finally dancing in Berlin....and with a fox!" 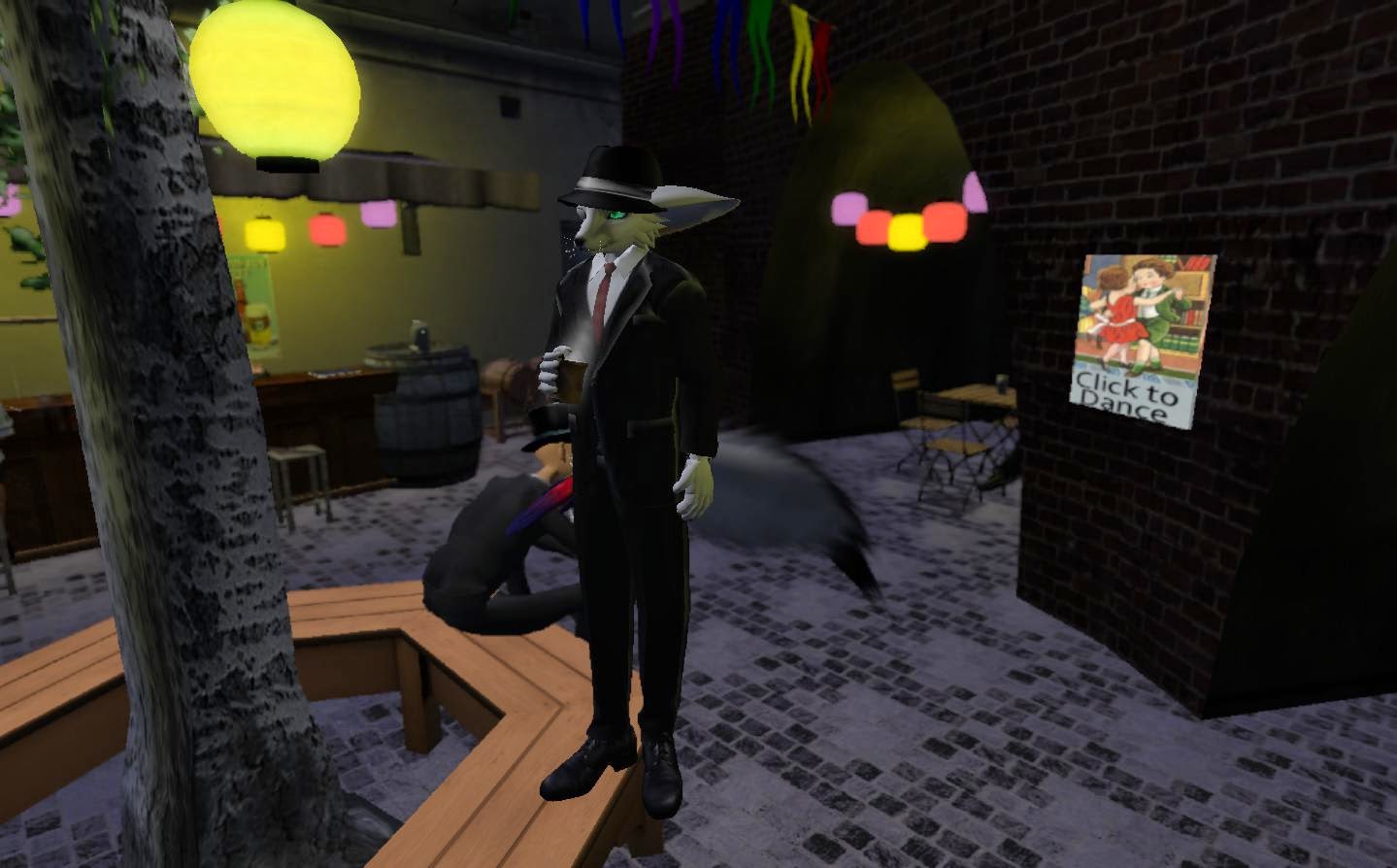 I wasn't the only fox around, others preferring nonhuman avs also taking the chance to visit. Most visitors chose to stick with outfits close to the era's fashion though. When I asked what was the most unusual avatar seen, one answered they saw a kind of mermaid floating around. 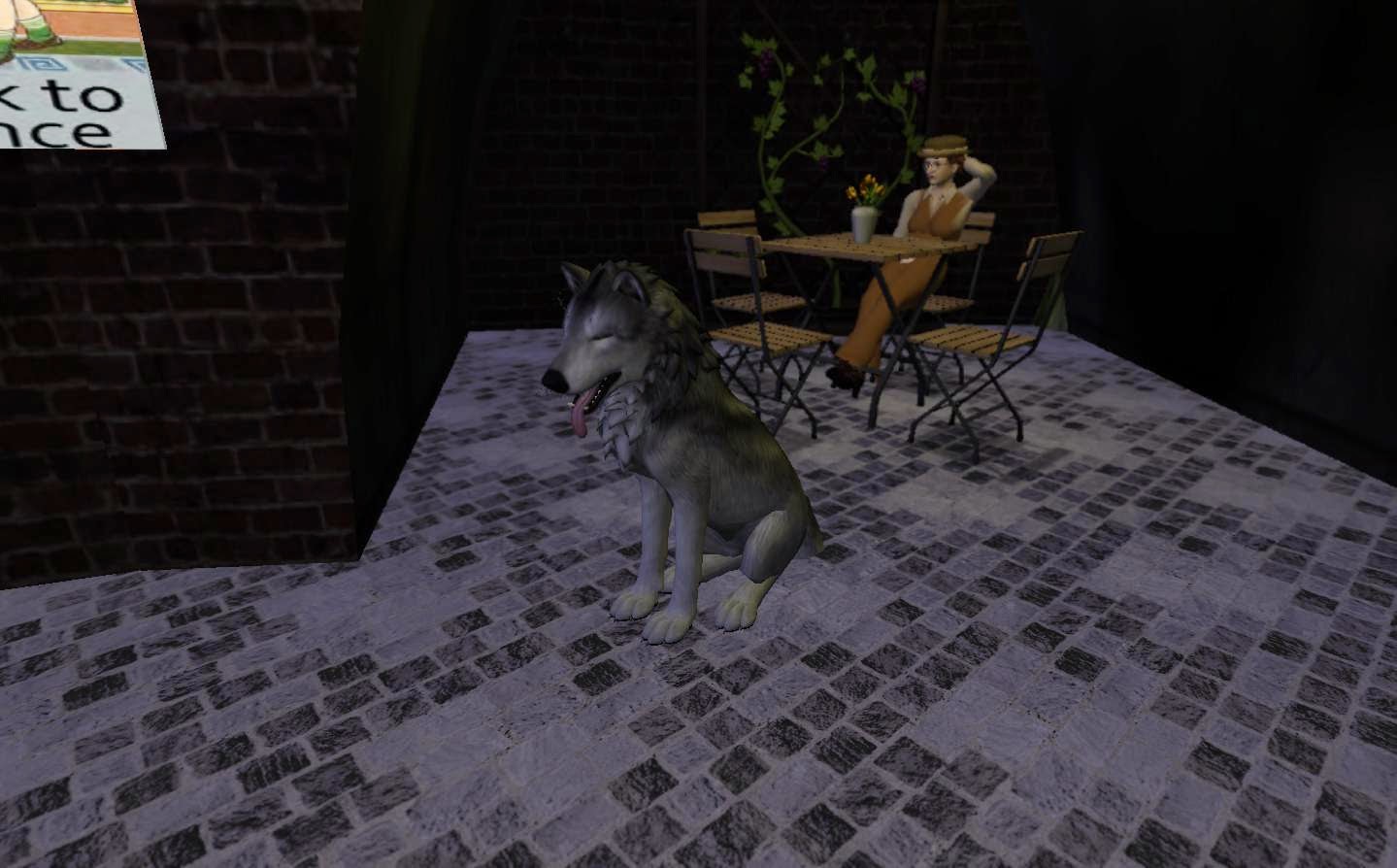 Later on would be events just for locals, such as a soap box derby. Jo told of some antics in the past, "once, my friend Jan, crashed into a pile of fresh fish on the docks ... we all stank of fish there, but it was fun to see." "Soapbox derby is serious stuff," another commented, "Kids don't fool around these days."

There was also a "Frau Jo" (joeldorado) joking around some distance away. Jo pretended to be upset, "Don't make me hit you into the hospital you cow. ... that evil woman pretends to be me. ... she dances at that vulgar Eldorado club, trying to ruin my reputation. If she knows whats good for her, she better stay out of my way." Other locals took this banter with amusement, "I would pay money to watch two Jos fight." "Unless you want to see your club on fire, you better not put that woman on stage again!"

It was a night of meriment, as visitors had fun with the locals. But except for Monday June 2nd, other days of the anniversary would be just for the locals. Besides the soap box derby, there would be  a Miss Berlin Pageant, a talent show at one club, a scavenger hunt at the train station, and more.

Jo would write on her blog, "I could have never imagined it to turn out to become such a huge success, a sim with a the most amazing community, a sim that in stead of being just a bit of fun turned into a huge part of my life. And not just my life, I’m very proud to have tenants who have been living in this city for 2,3, 4 and even 5 years! Many of whom I’d call close friends. I’ve loved every minute of this time traveling adventure and it still is only the beginning."

She mention the possibility of starting a second historical RP area, though "I'm not making any promises."

Besides her 1920s Berlin Project, Jo Yardley's also known for her blog of goings on in Second Life. One can read it here: http://joyardley.wordpress.com/.  She also cohosts Daxtor Despress in the Drax Files Radio Hour.