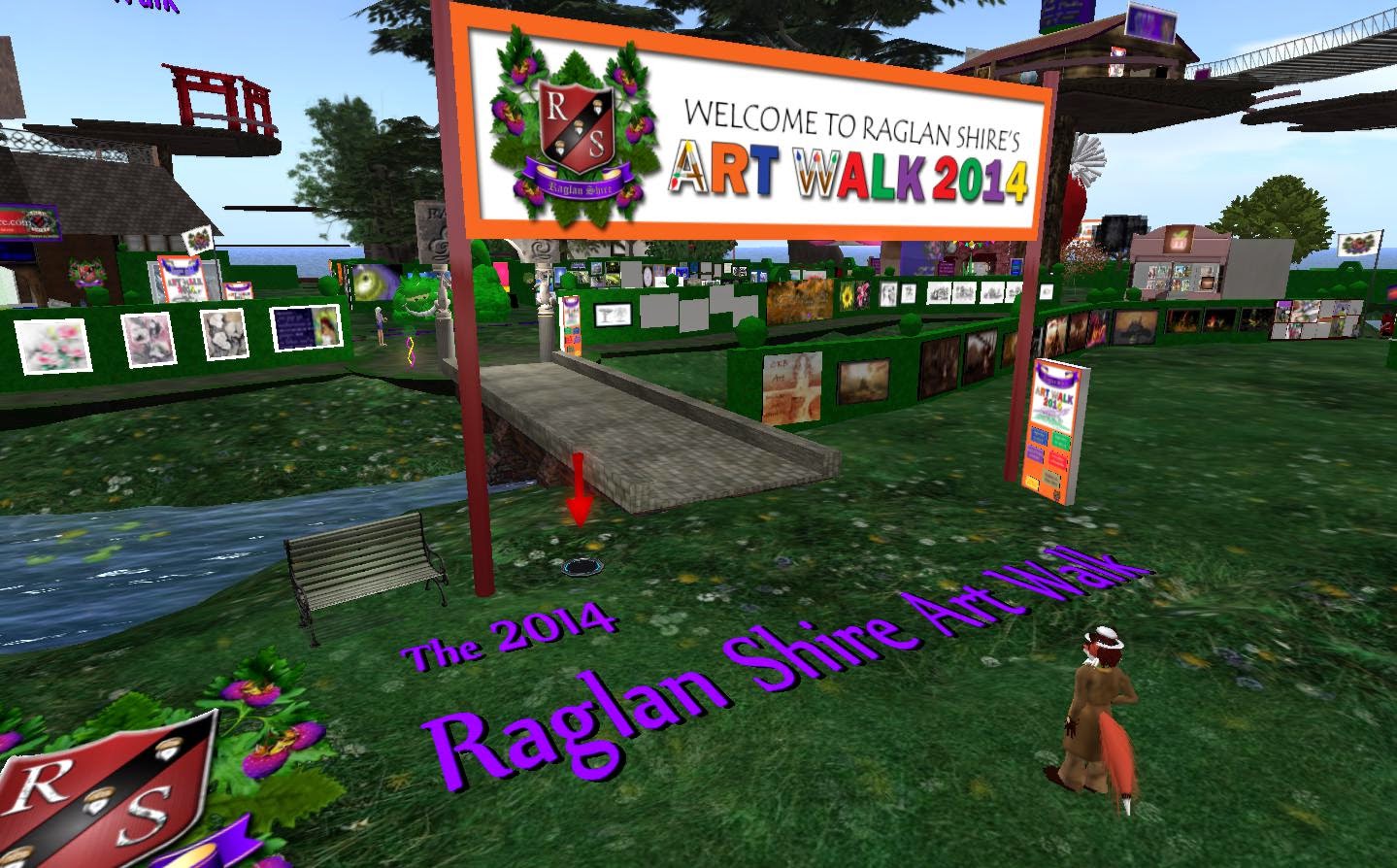 The weekend of May 24th and 25th were the last official days of the Raglan Shire art show. For those who don't know, Raglan Shire, and it's neighboring several sims, are the home of Second Life's most well known "Tiny" community. Most whom have been in Second Life for a while have seen them, these small avatars just a few feet high. Those of the Raglan community are known for their lighthearted ways, playfully greeting one another in ways like beeping one another on the nose, cheer at the sight or mention of waffles, and have a seemingly complete absence of drama (probably because they're too busy having fun). While some might find them a bit silly, others find them a delight to be around and find their cheerful manner contagious. 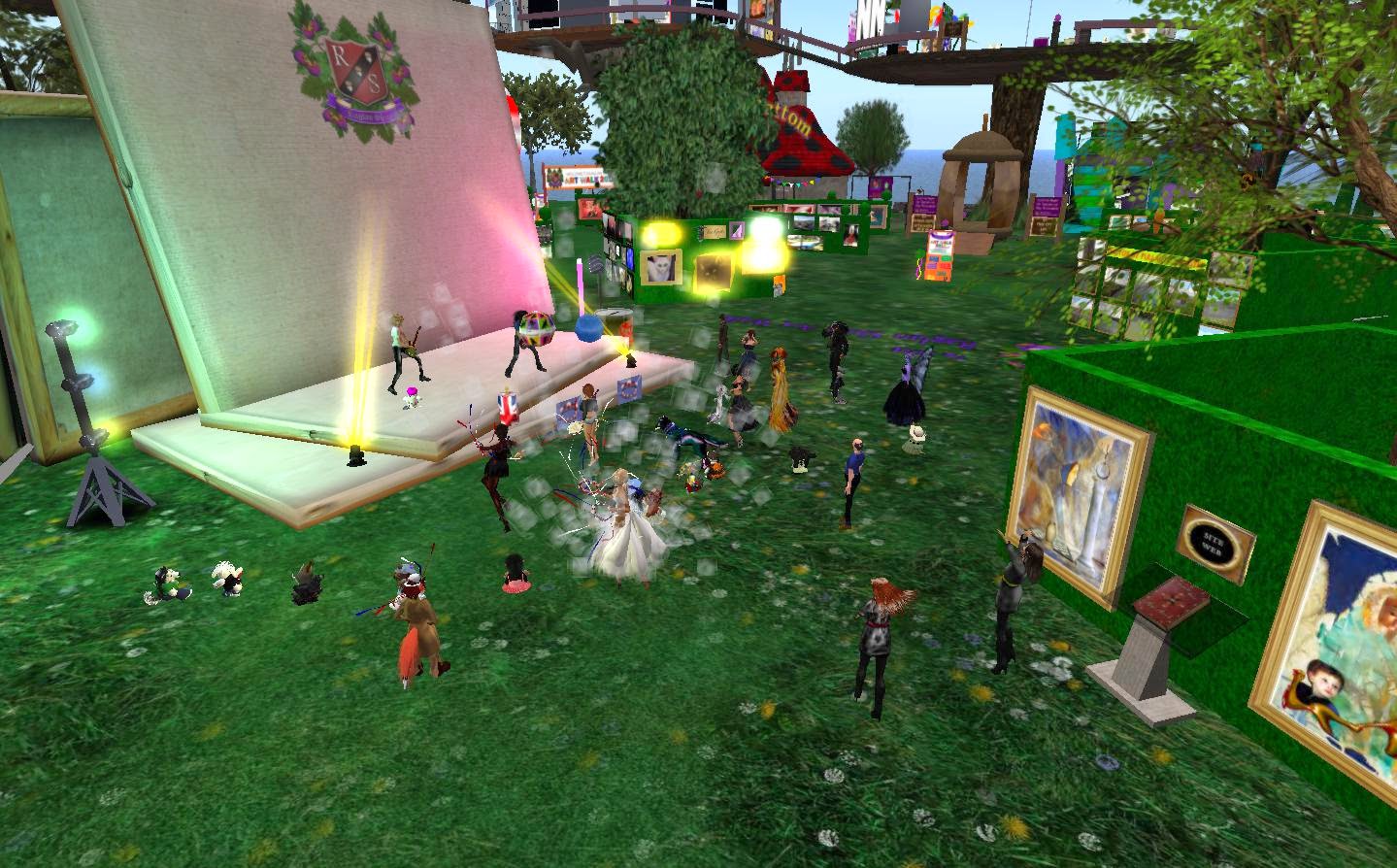 On Saturday the 24th, I dropped in as a music concert was going on. Two "biggies," as tinies sometimes call human (and furry & neko) avatars, were performing for a crowd of tiny locals and normal-sized visitors. Grif Bamaisin and Drutim Bates sung on stage for the crowd, "luvs da Live Musicians." When it was over, the tinies cheered, and invited others to see the art show while it was still up, "yay for raglan!!! yay for art!!!!!" There was also an air combat match elsewhere, "Jay iz dog fightin in planes - wants to go?" The musicians left in good spirits, "Thanks again everyone - you guys are great to play to." 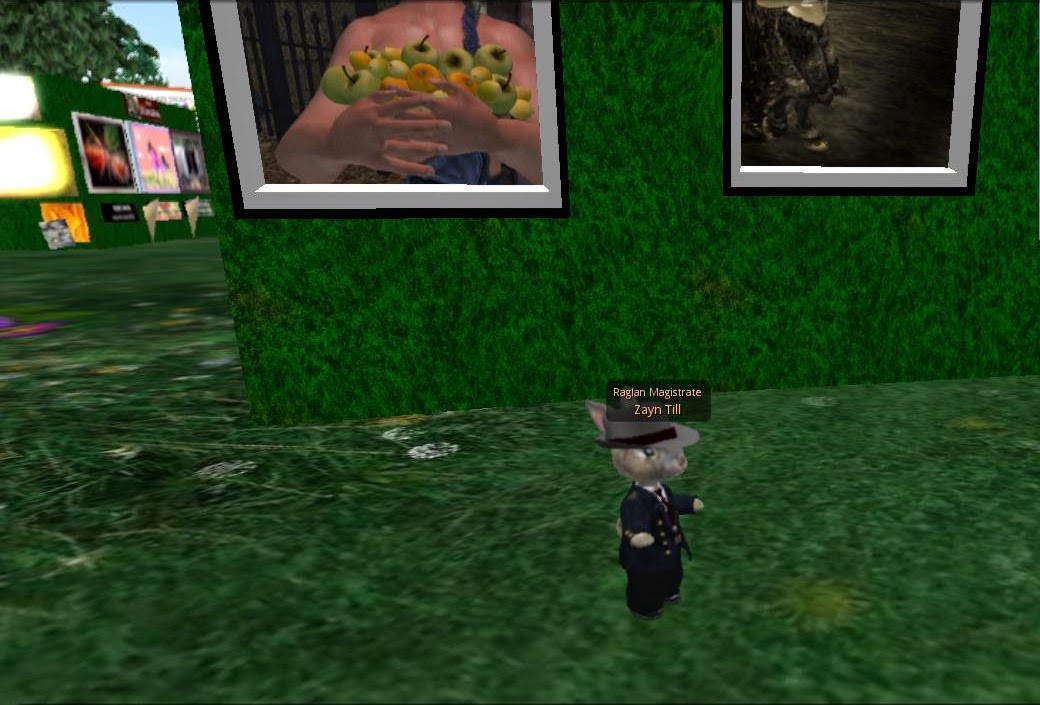 While there, I ran into Zayn Till, the magistrate. He greeted me, "Helloz Bixyl (smile). Good day to come! last day of Artwalk." Asking him how it turned out, he answered, "It has been wonderful (smile), so much fabulous art, YESH!" 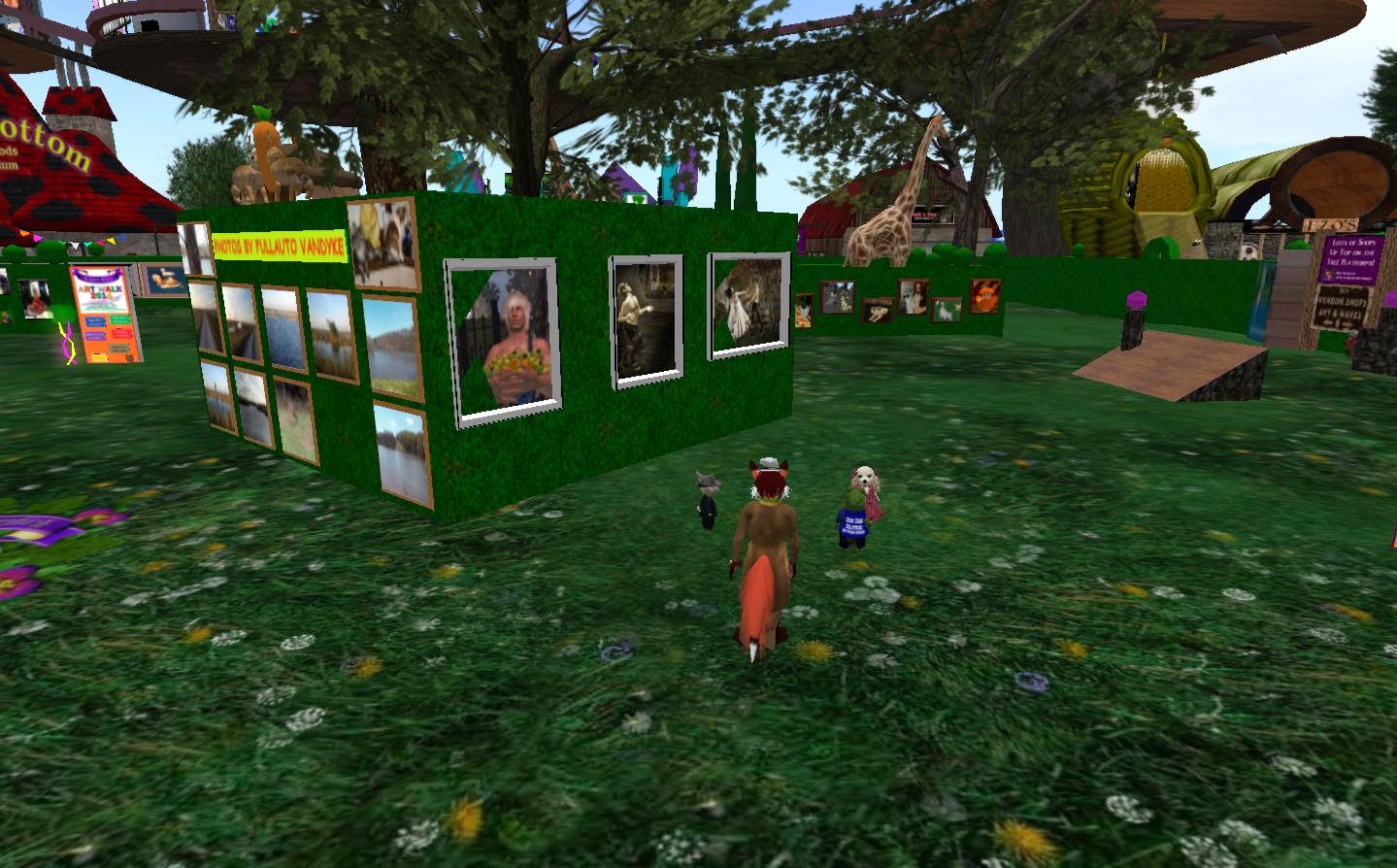 Zayn turned to a nearby artist, "Skyblue, loved your watercolors." When I asked which art had gotten the most attention, he wasn't sure, "with so much art that would be impossible.. its all about self expression and art of coursed.. is subjective. You'd have to walk about and see yourself. (smile)" One local nearby suggested, "Esops fables on Athen's Shire?? The giant flower with book pages for petals on Morning Shire, or the giant carrot sculpture on Heron?? We'll go see it all! hah!" "Enjoy the arts!" Zayn would say again, "ART WALK!!! Its INTENTS!!" 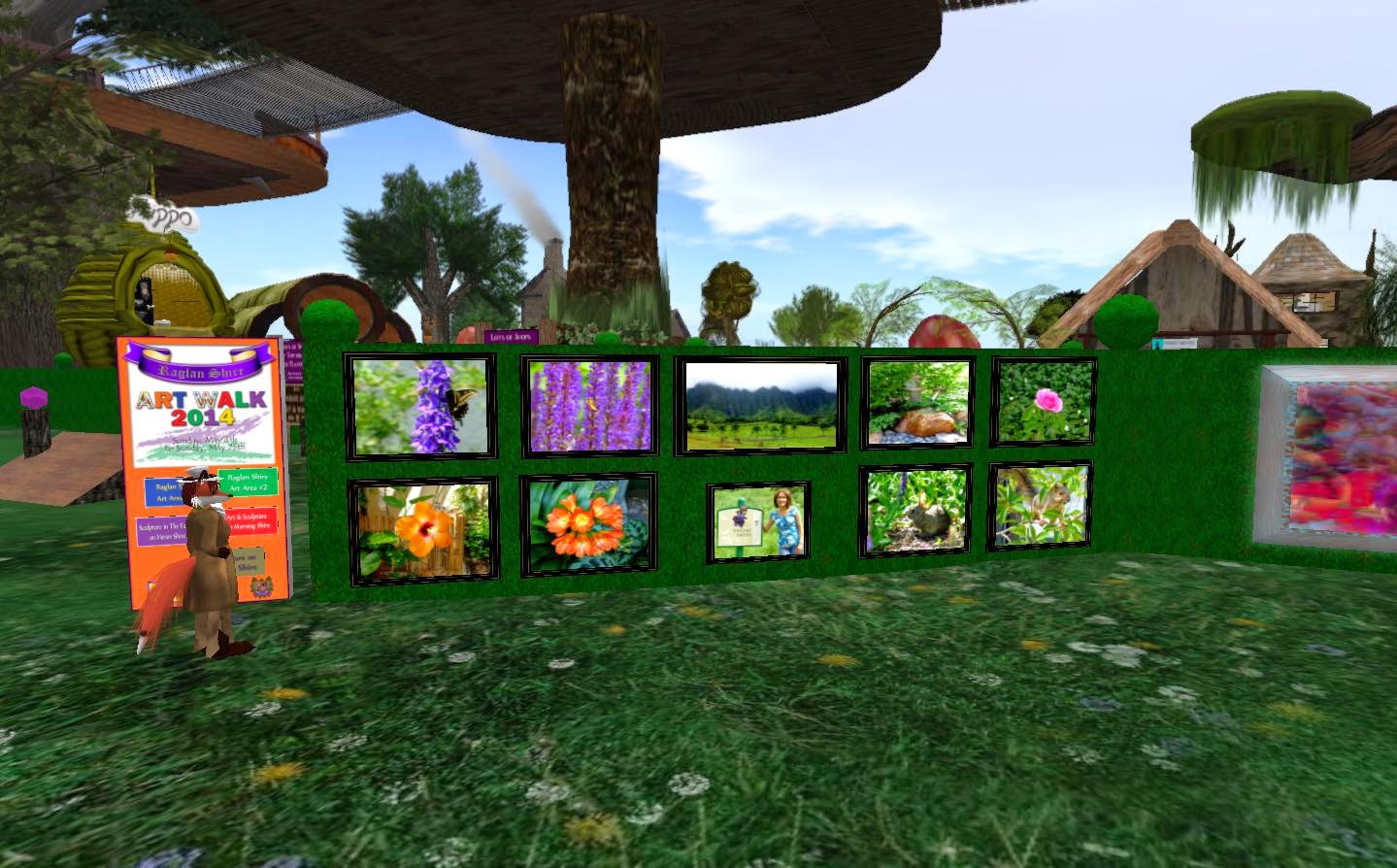 There was quite a bit to see. There were a number of paintings exhibited. 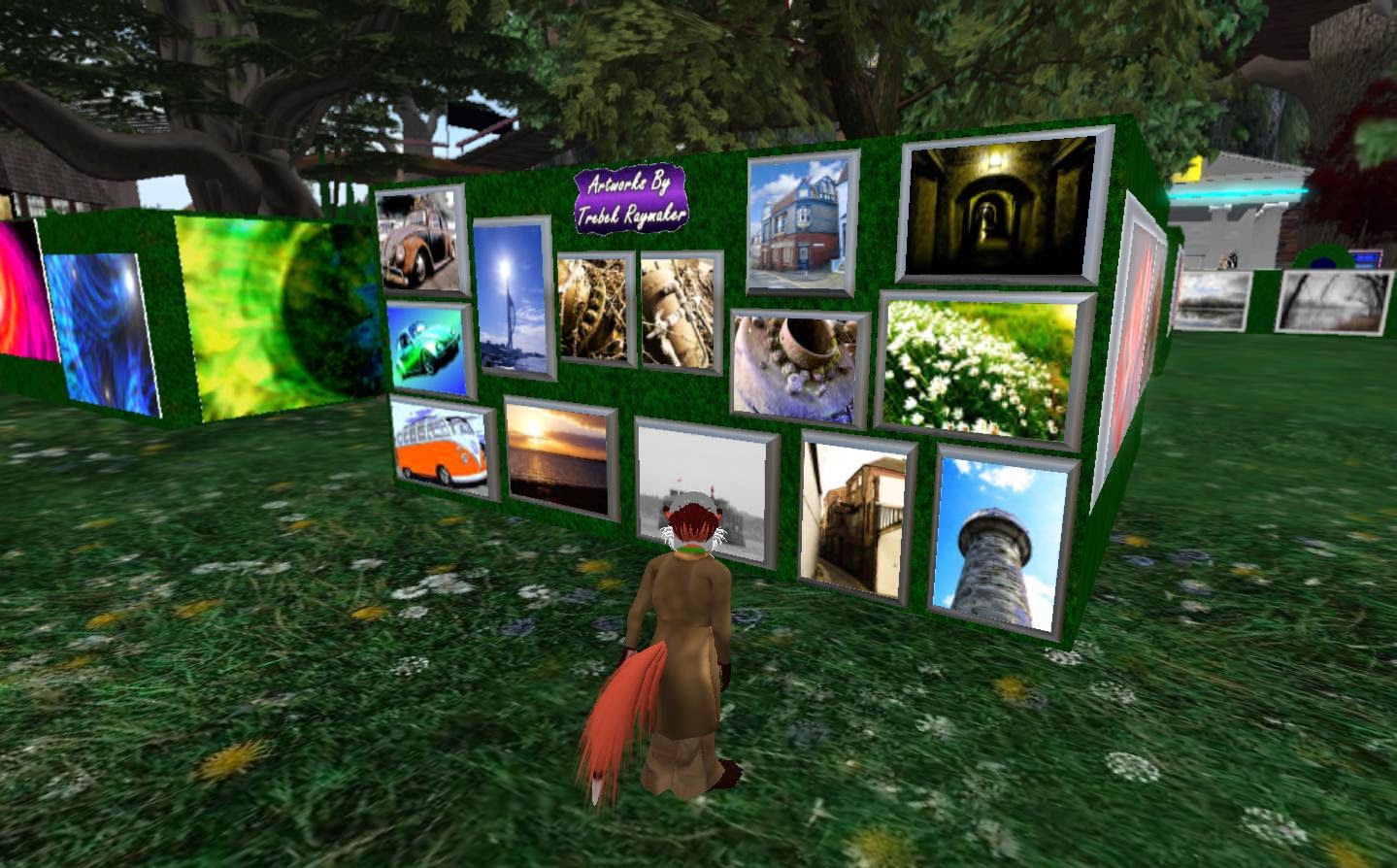 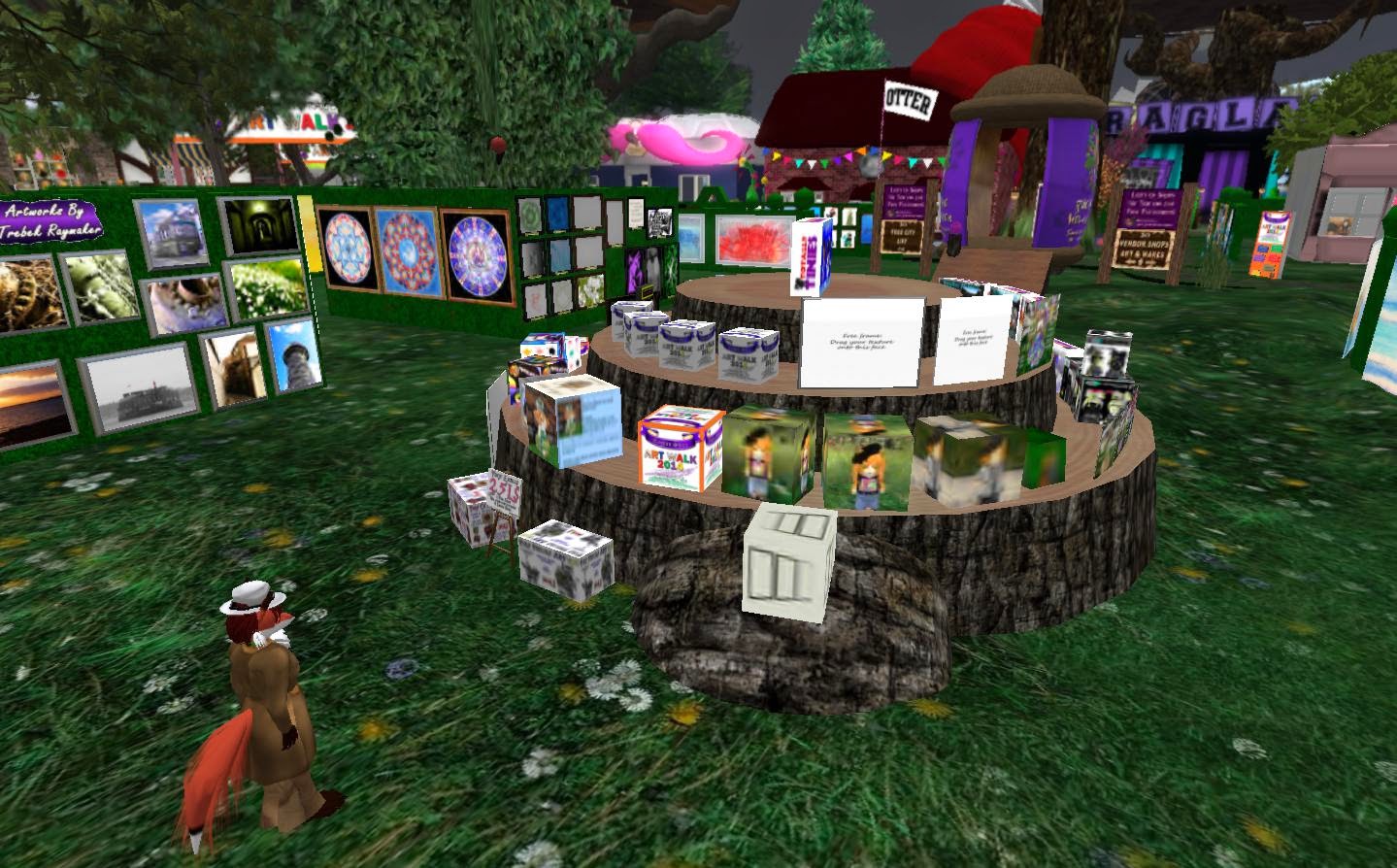 There was also a table where visitors could pick up some tiny avatars, outfits, and animations/gestures. Some were for free. 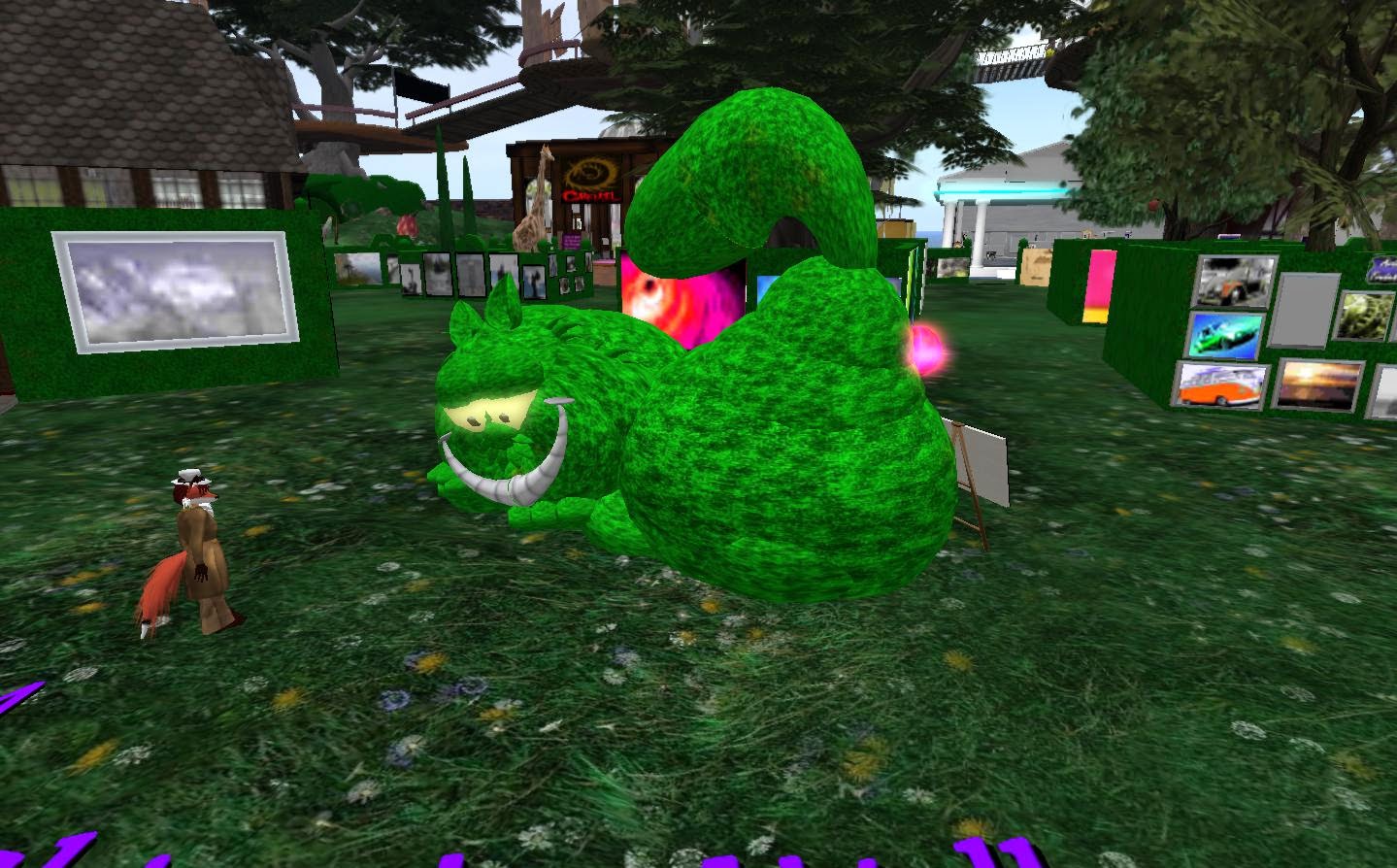 There was more than just paintings, but also 3D sculptures. 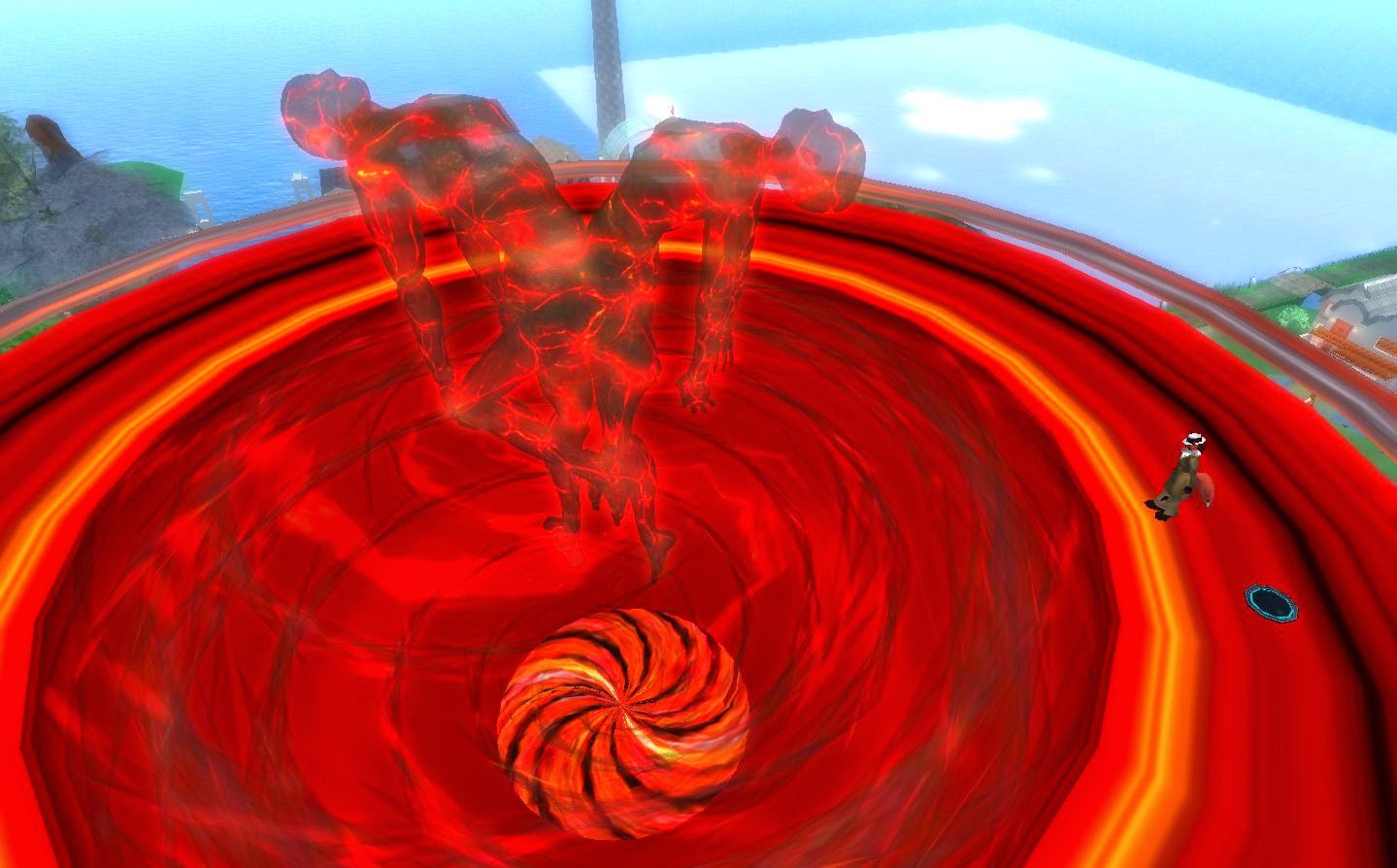 One display needed a teleport to get to. It showed a couple in an ever twirling dance. 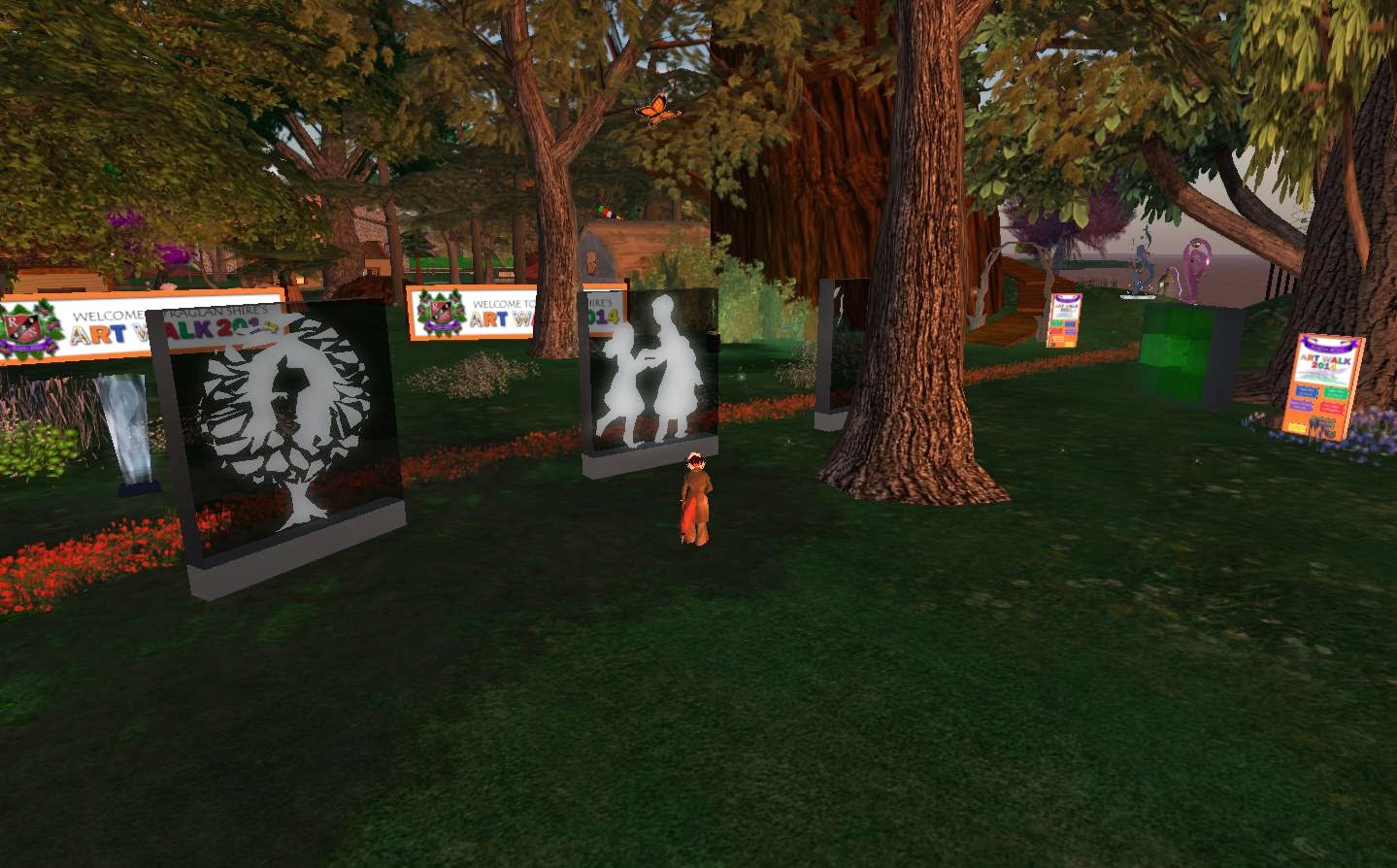 Some sims had no, or few, paintings, but just sculptures. 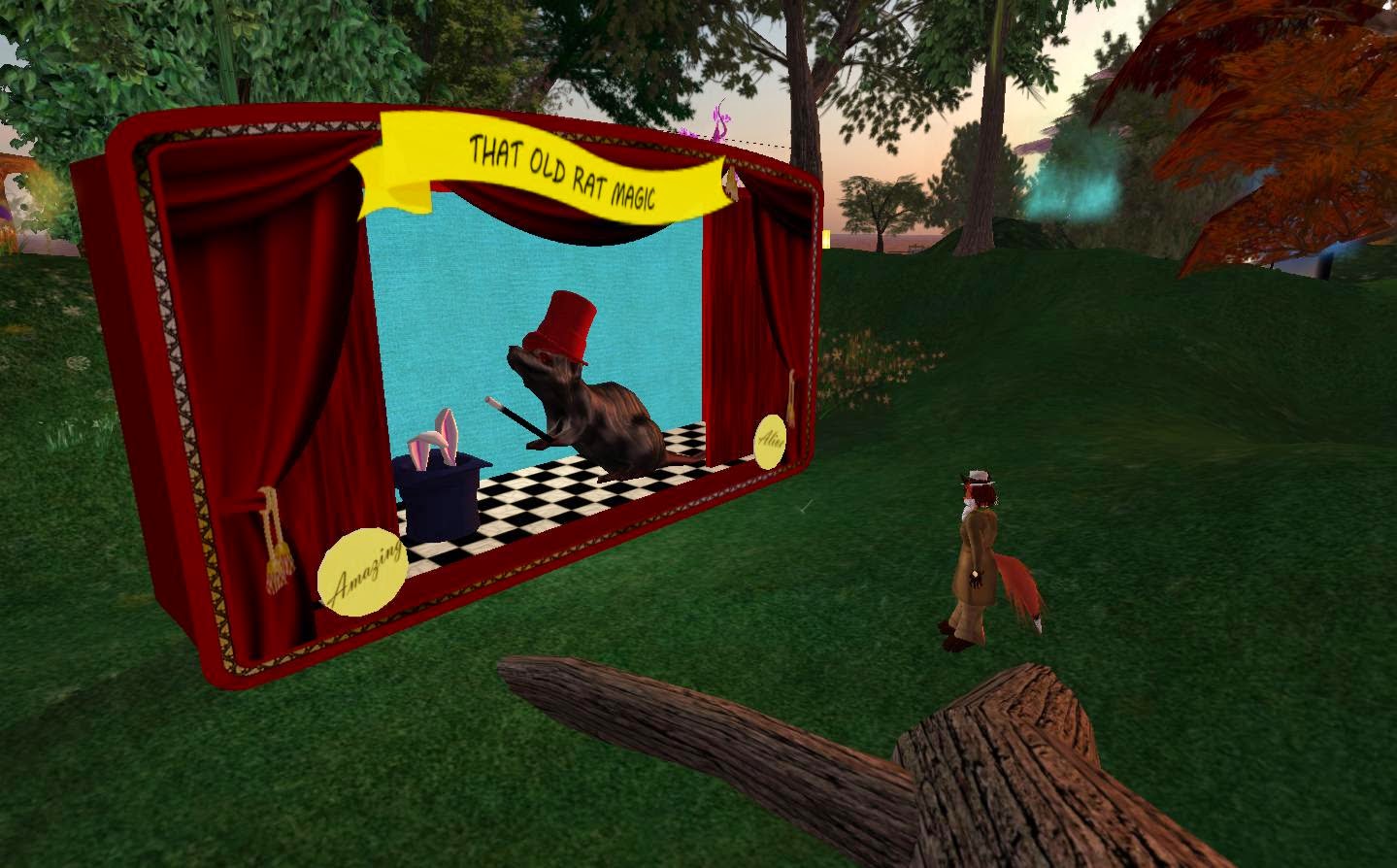 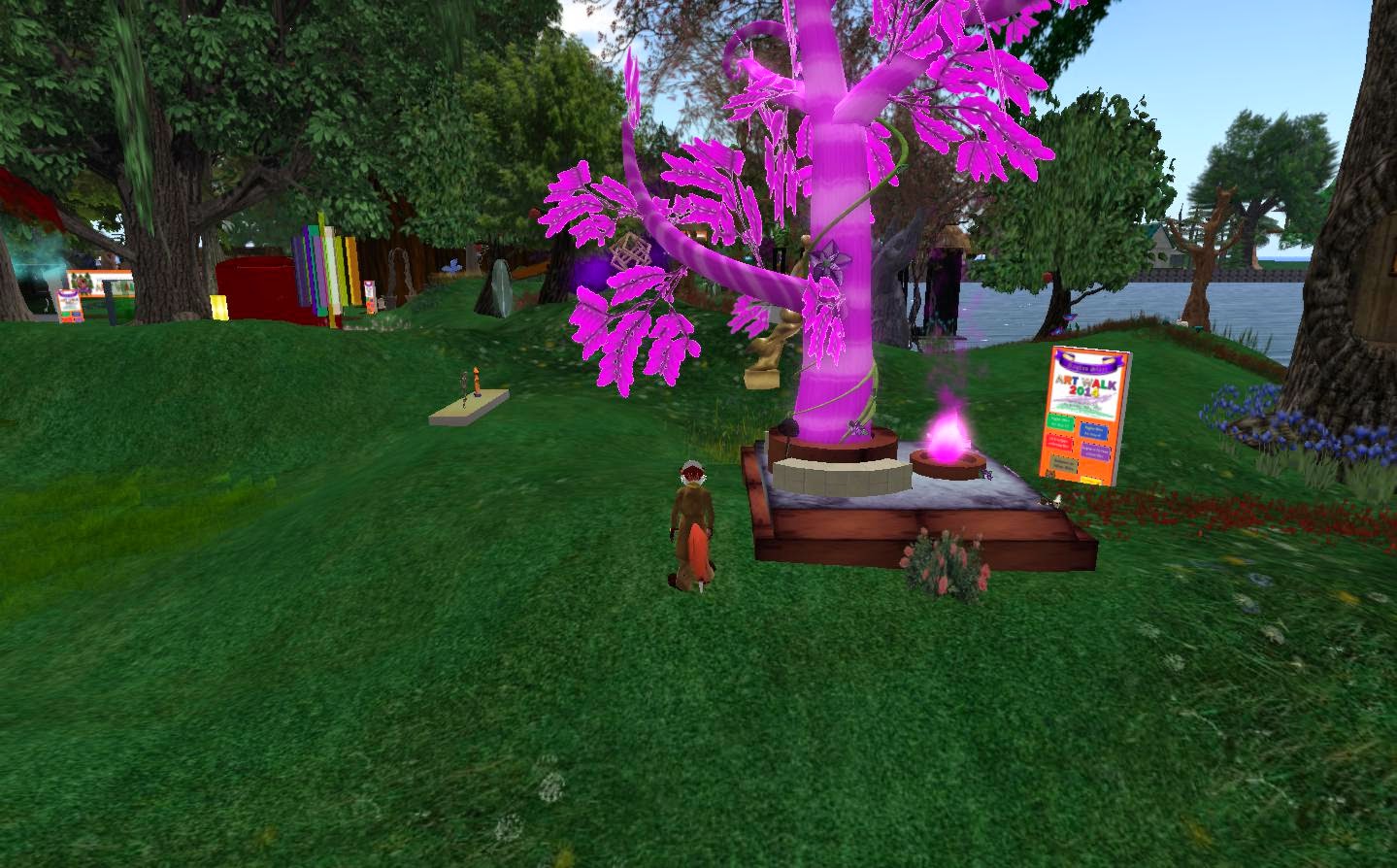 A pink tree? Was there a lorax nearby? 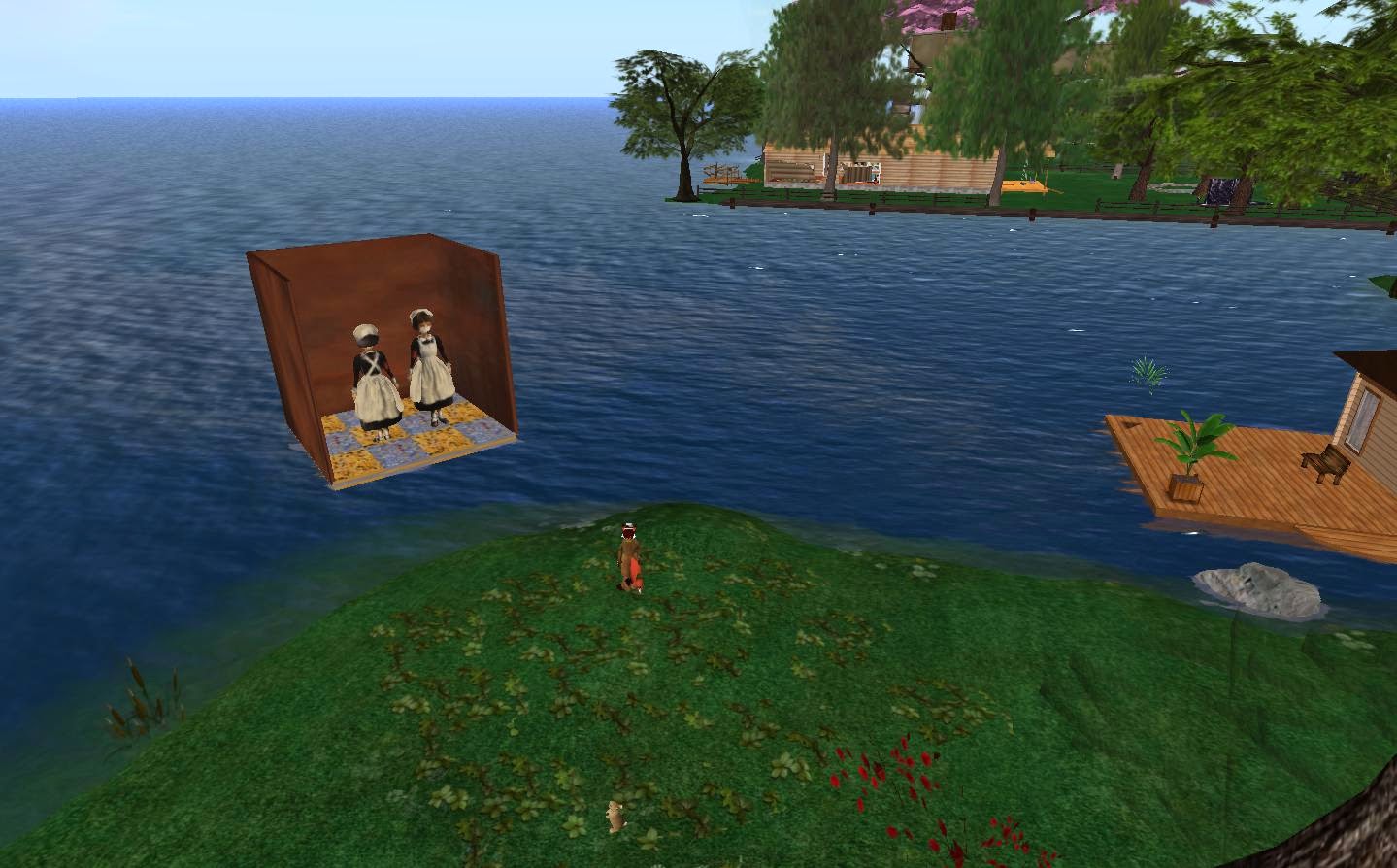 Why do I get the feeling Jack Nicholson is nearby with an axe? 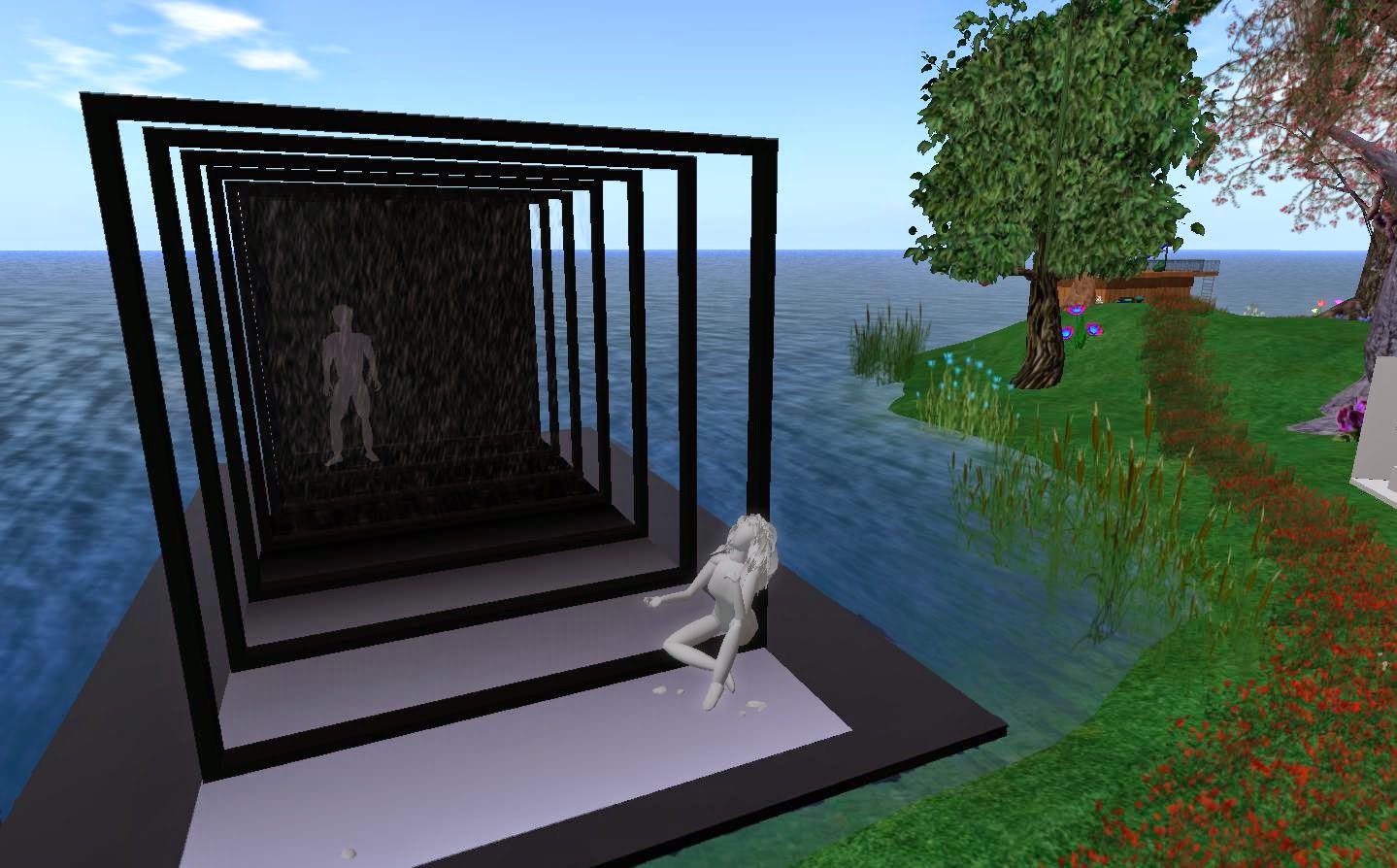 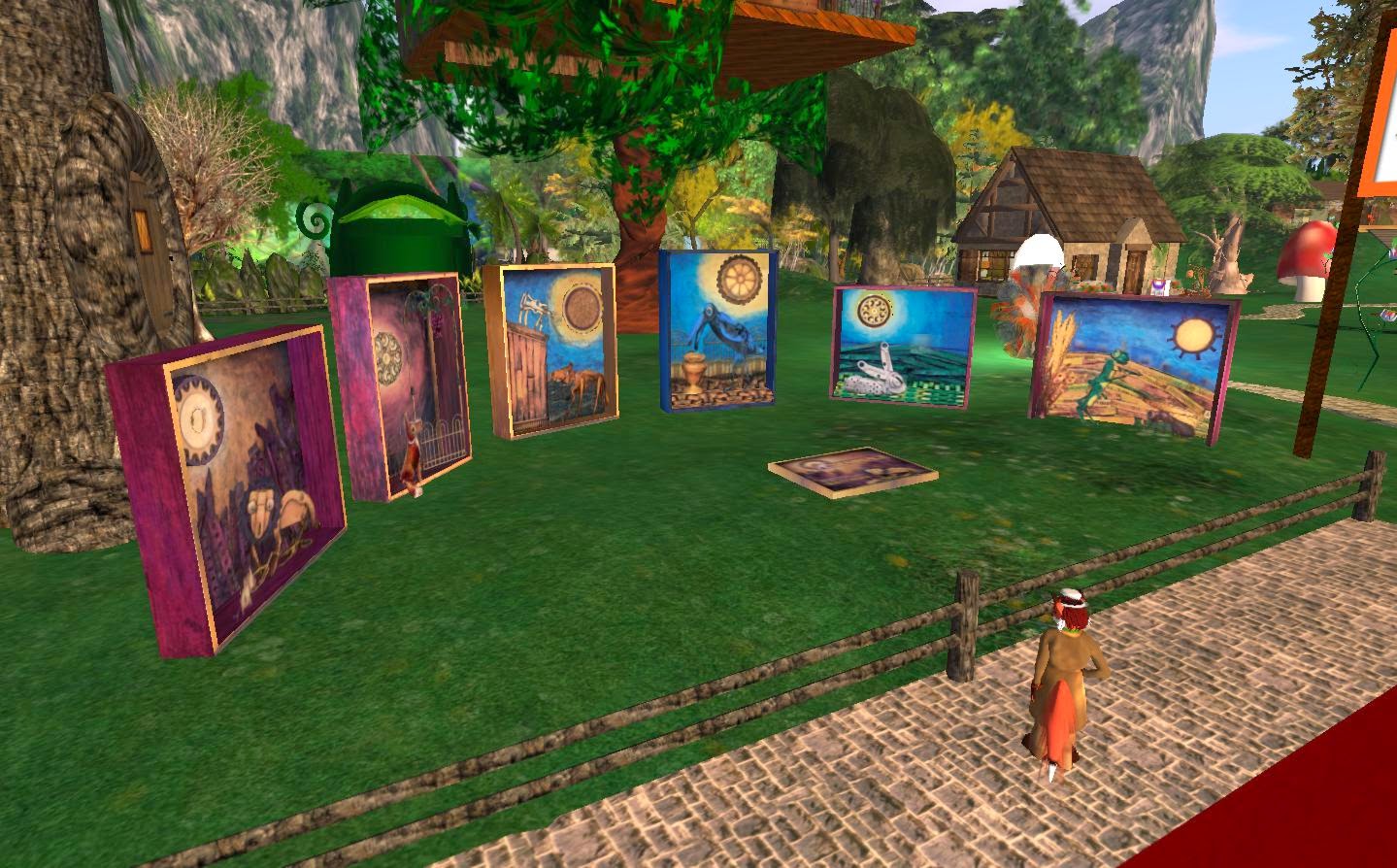 This was the Aesop's Fables exhibit mentioned earlier. 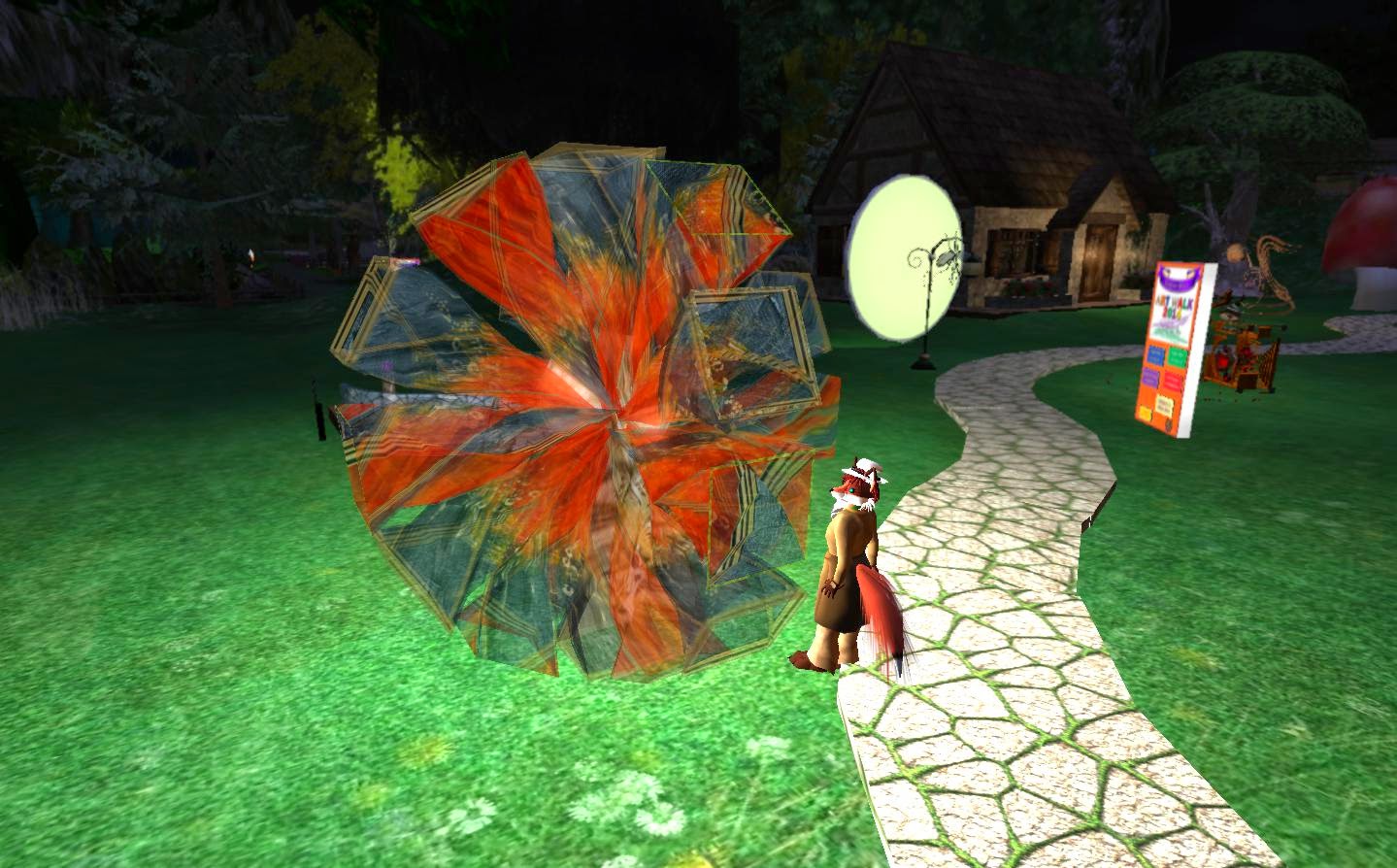 This was meant to be seen at night. 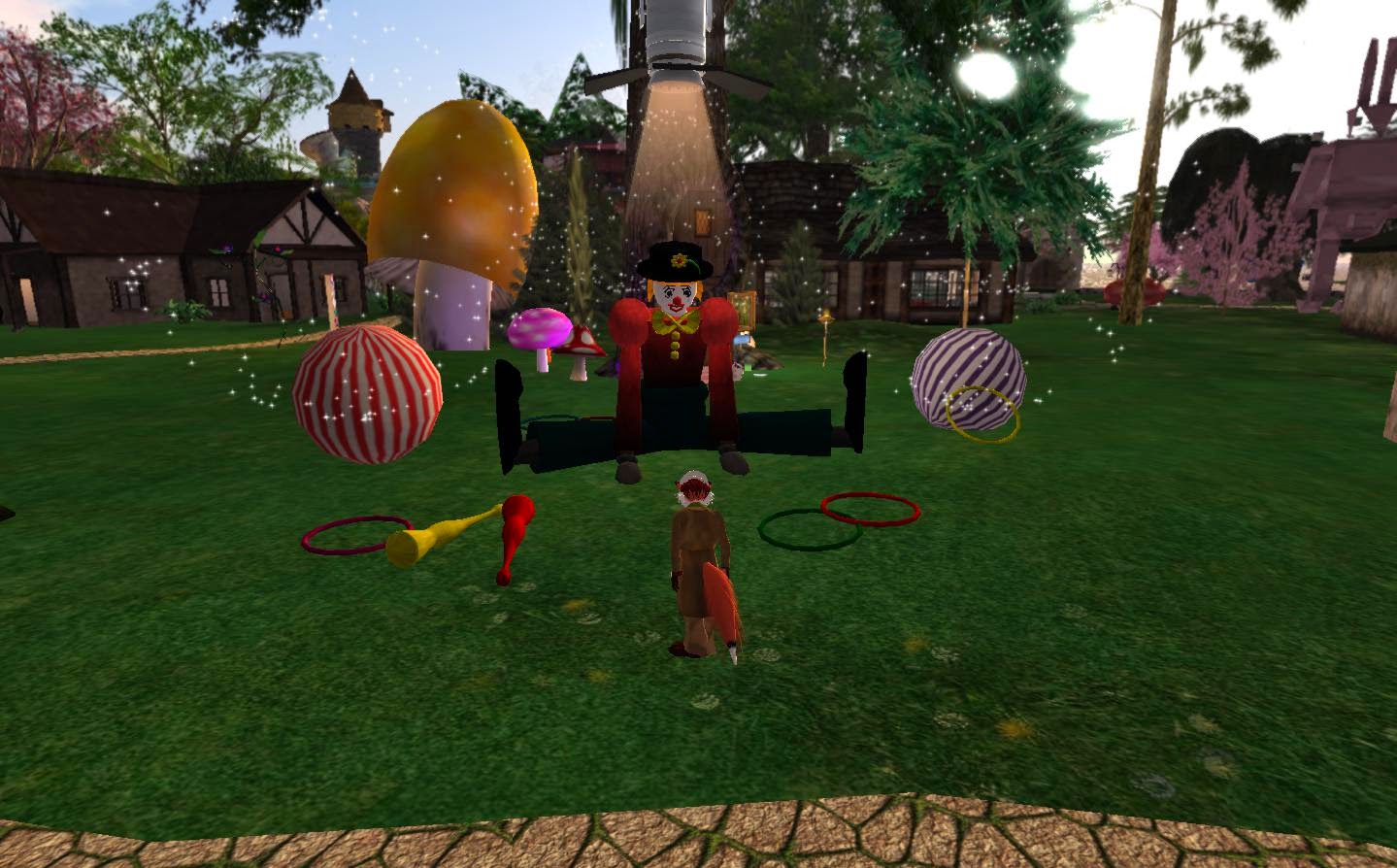 When artists clown around. 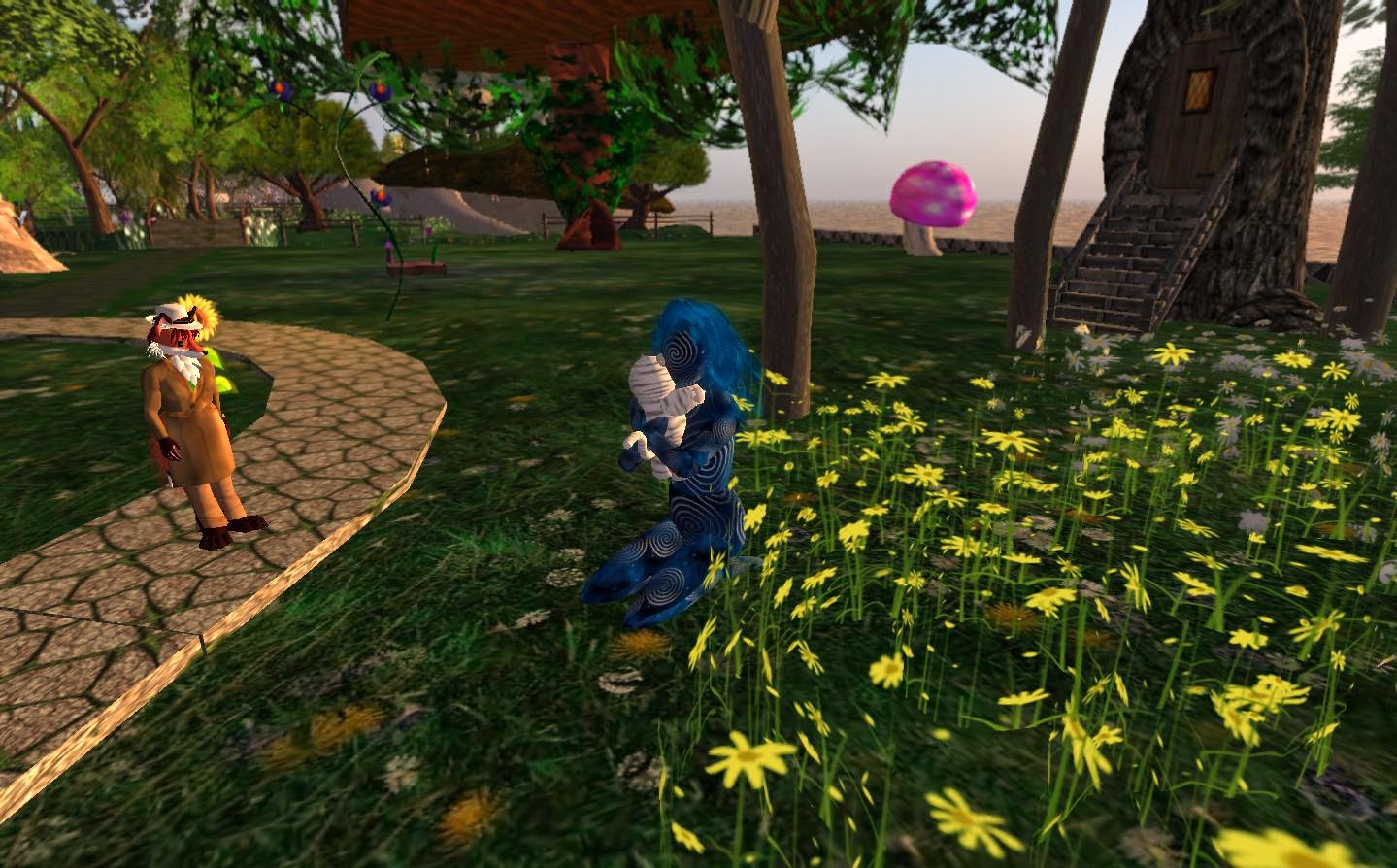 A faceless figure hugging a critter. 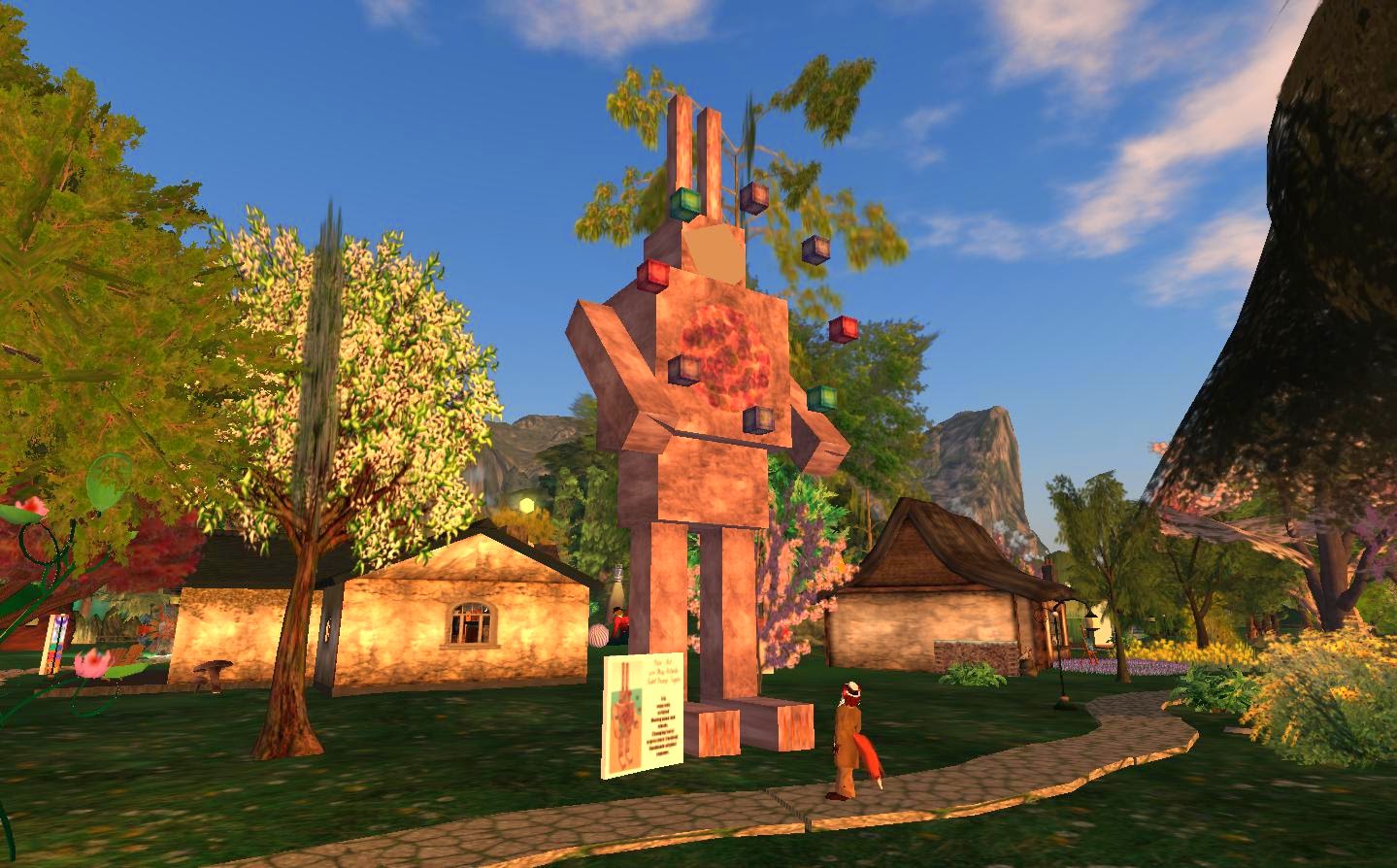 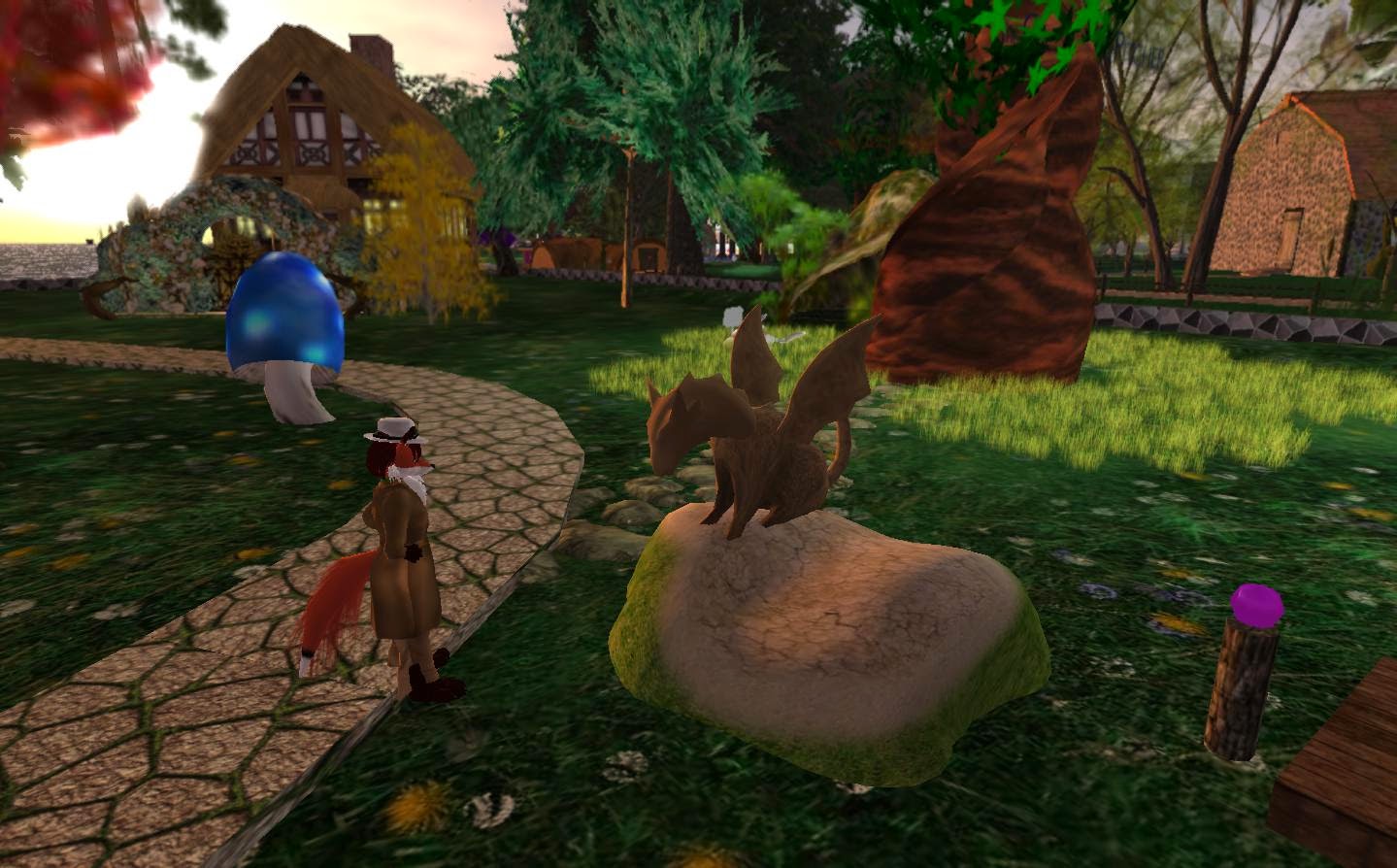 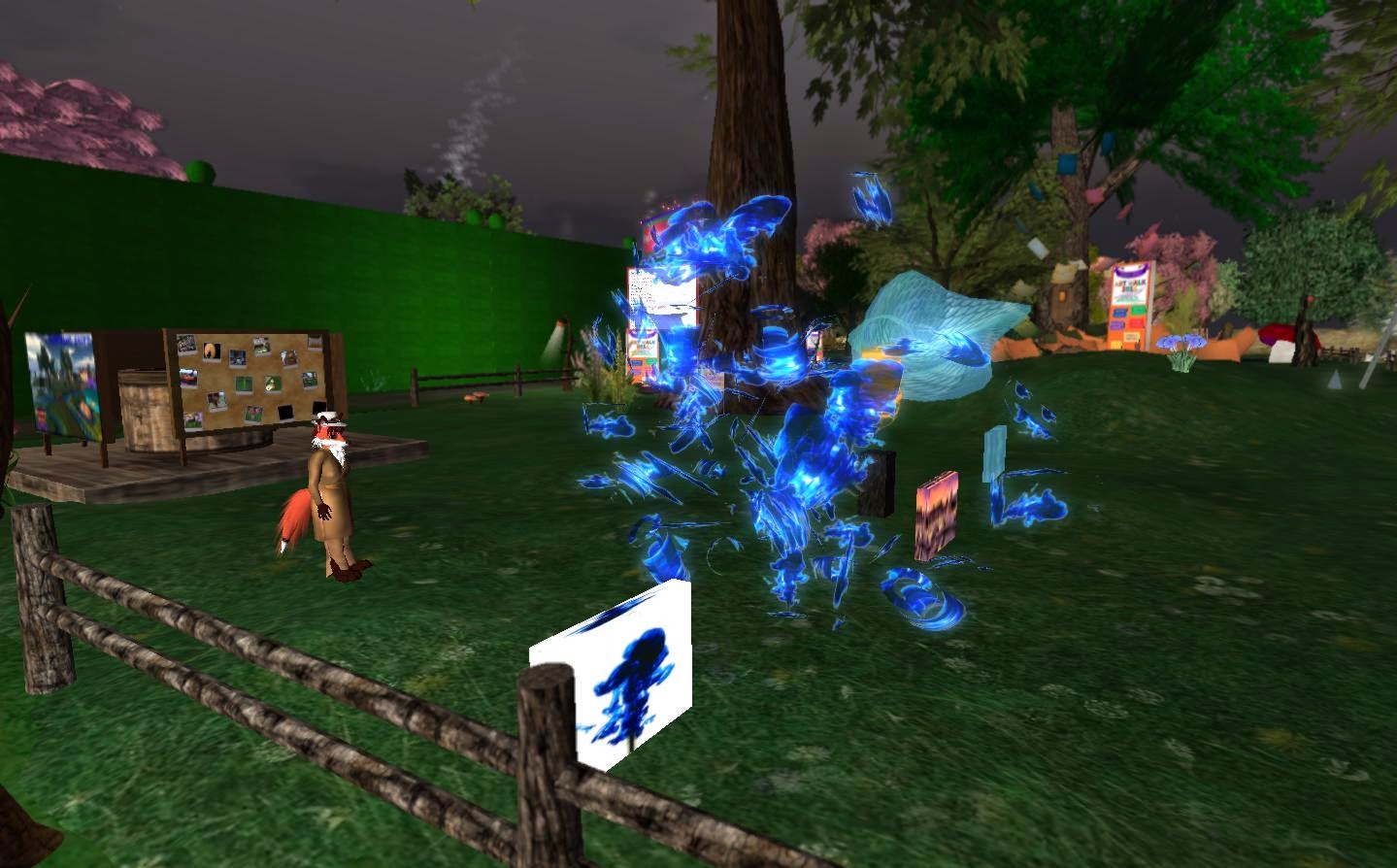 Floating ink, as if squirted by an octopus. 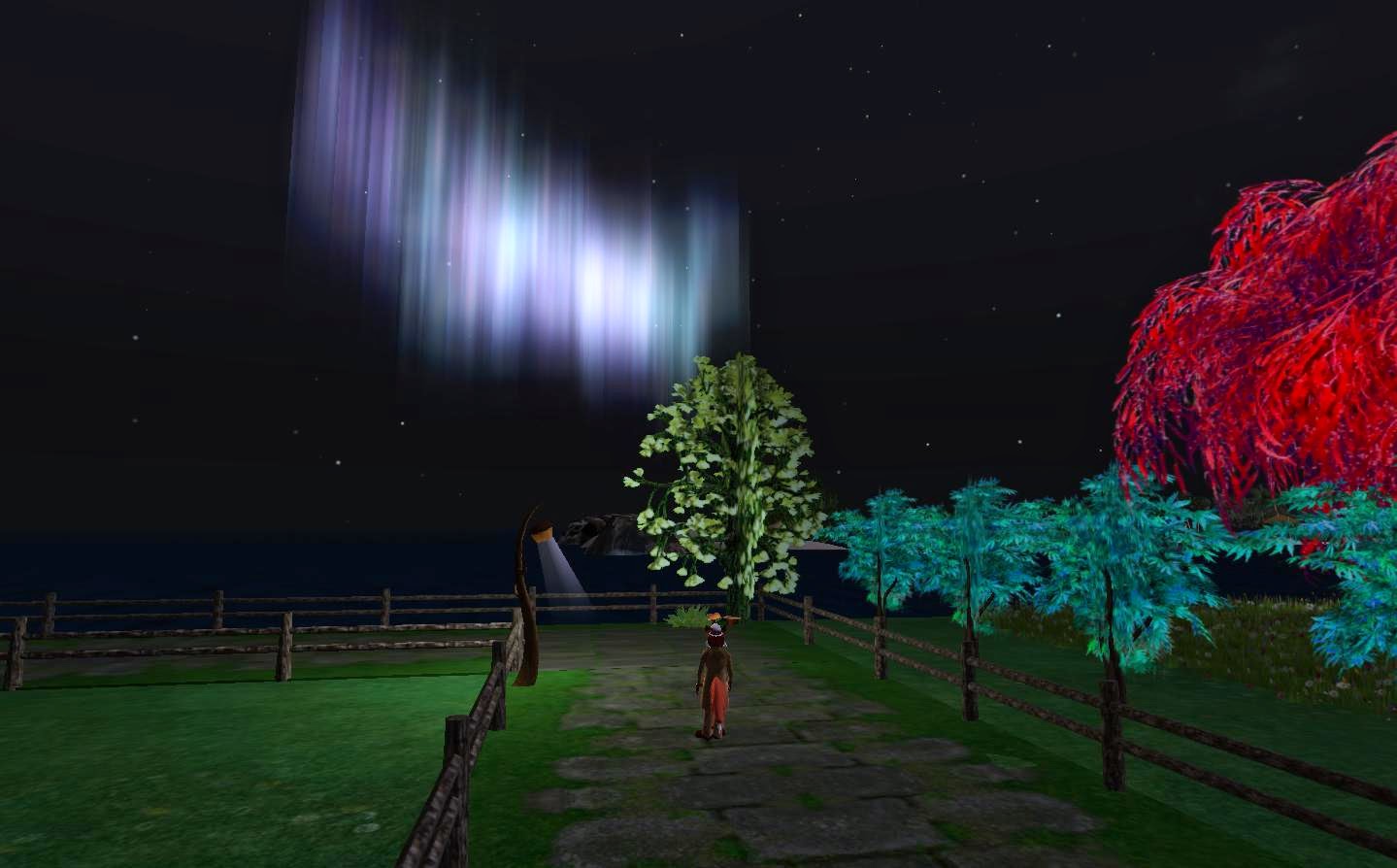 Not everything that looked appealing was an art exhibit. The neighborhood itself was nice to look around in, one place having an eye-catching aurora. 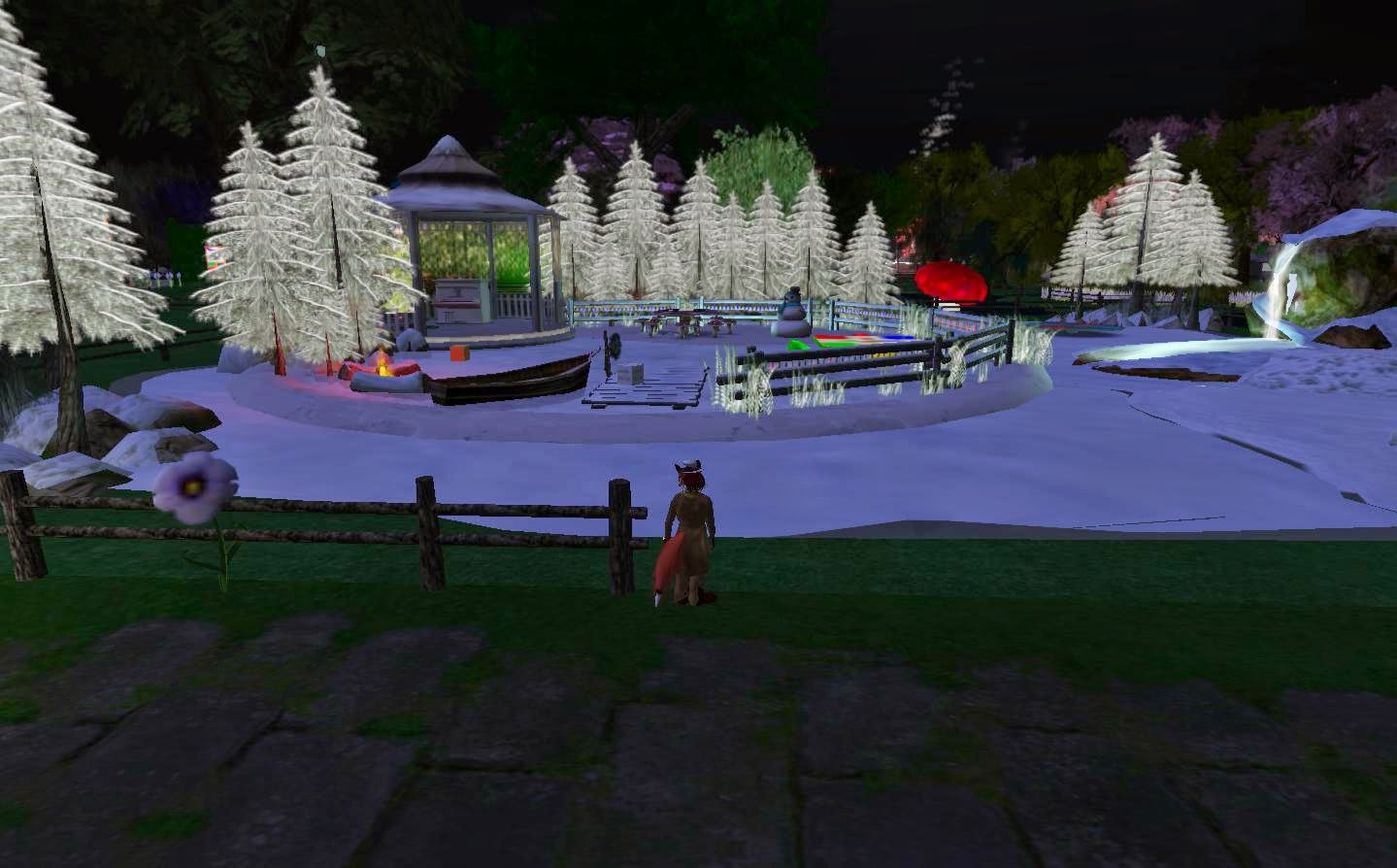 This resident obviously wants to "keep it cool" despite the summer. 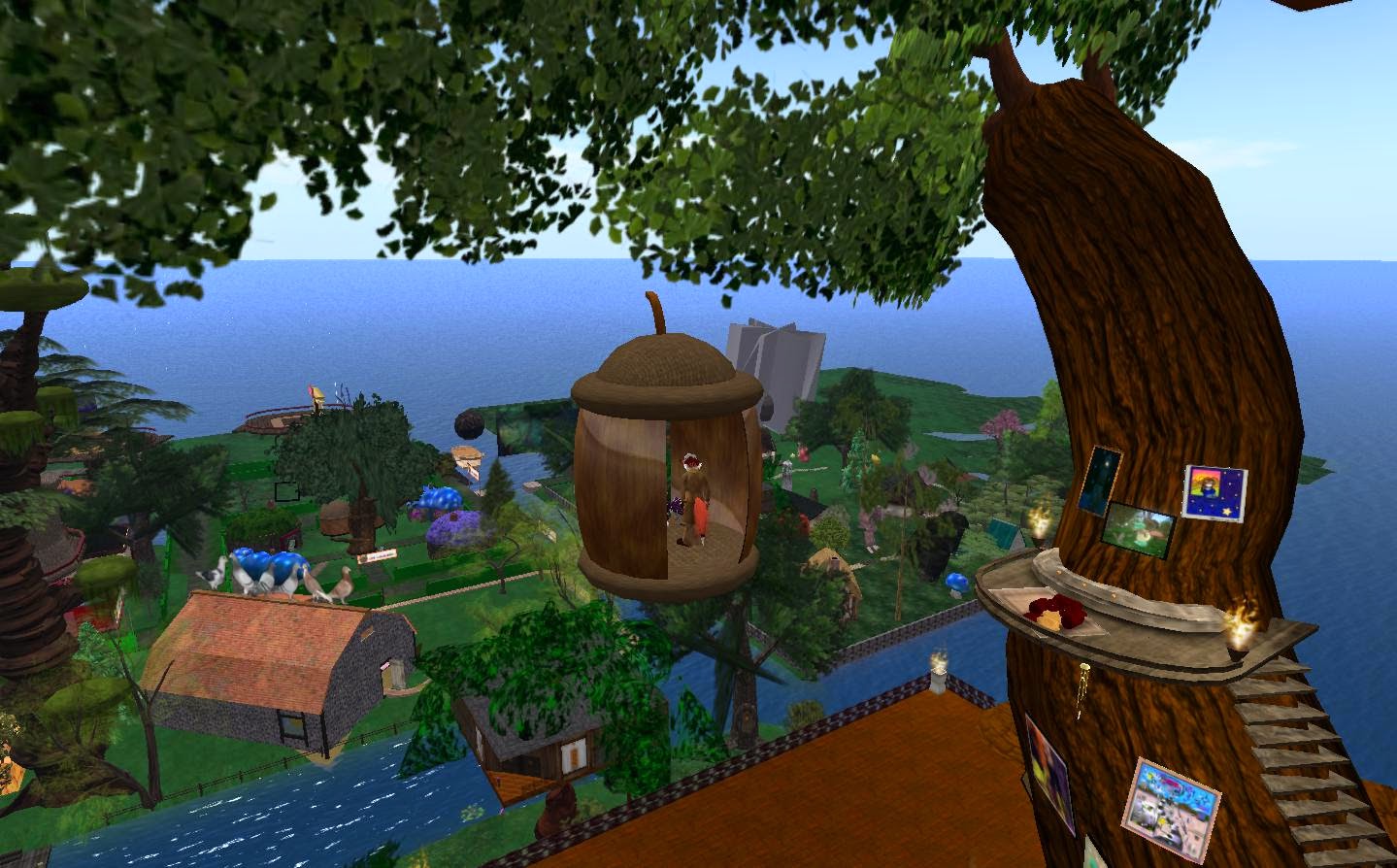 One resident showed me one of the community trees. Note the acorn elevator.

It'll be another year until the next art show, but Raglan has events every month. And Saturday May 31, the Giant Snails drop by for their cross sim race, taking place on the last Saturday of each month of the Relay season.