A Look Back at Burn2 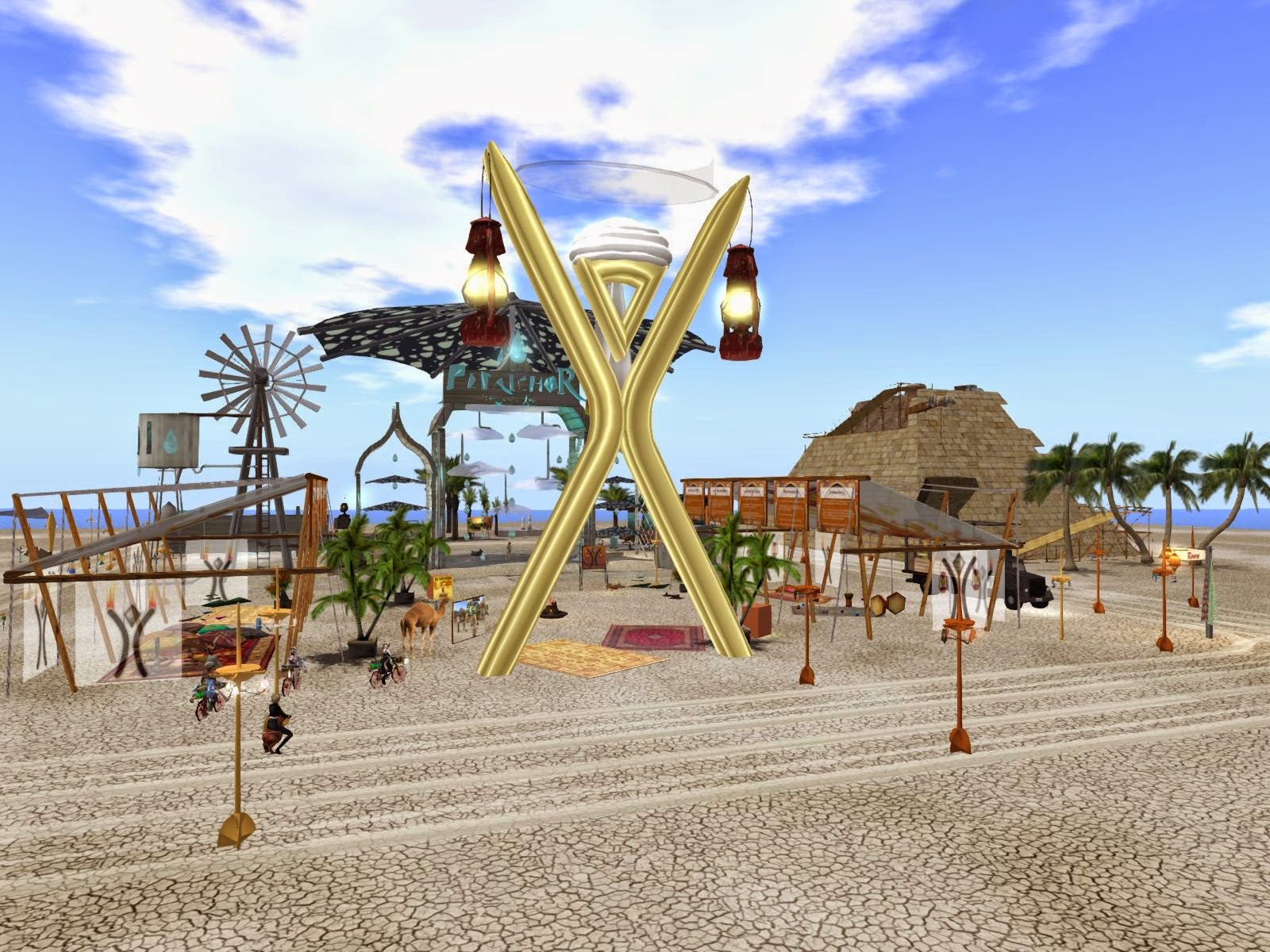 Real life Burning Man Event
In real life the “Burning Man” festival takes place in Black Rock Desert in Nevada, U.S.A. It is a art and music festival, although participants can choose what to get out of the event. This real life event takes place every year, last time from August 25 th, till September 1st 2014. The “Wicker Man” is burned down at the end of the event.
Burn2 Second Life Event
In Second Life, we have our own version of the festival, called the “Burn2” event. It took place from October 18 th, 2014 and October 28 th, 2014. The Playa, the main place of the Burn2, was built up with many places to visit, too many to list here, though. When you arrive for the first time at Burn2, you need to ring the bell, to be part of the so-called “Burners,” the Second Life residents that are participating in the Burn2 event. 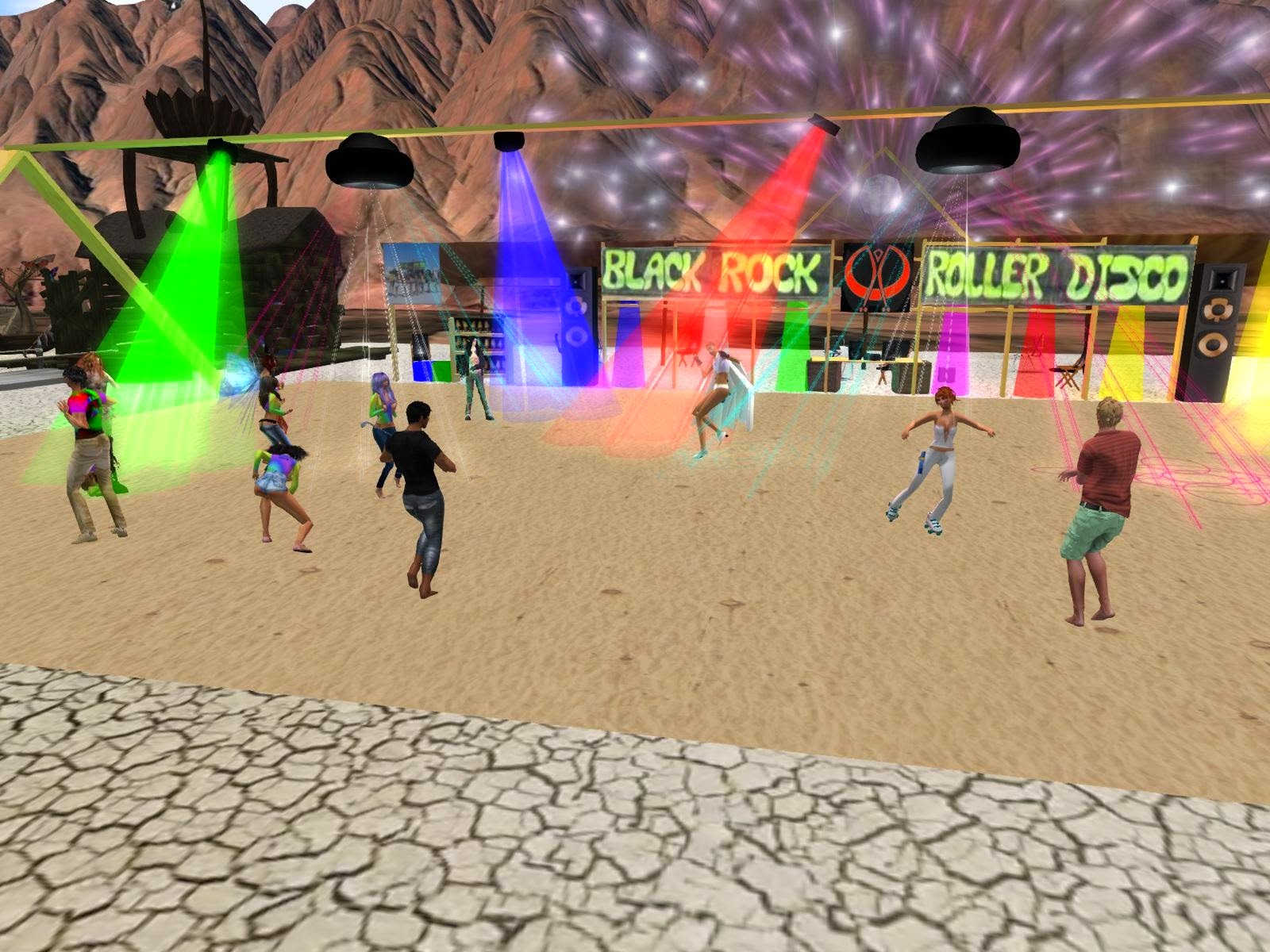 Burners hold to the Ten Principles, more information can be found at this page :
http://www.burningman.com/whatisburningman/about_burningman/principles.html#.VE6pZ8moFWg
At Burn2, you can wander around and visit many places. There is a statue, the “Burning Man,” which is in the center of the main plaza. It stays put there the whole time of the event. The same as in the real life event,  “The Man” is burned down as well. I was there when they burned down the Burning Man. You can view the pictures here : 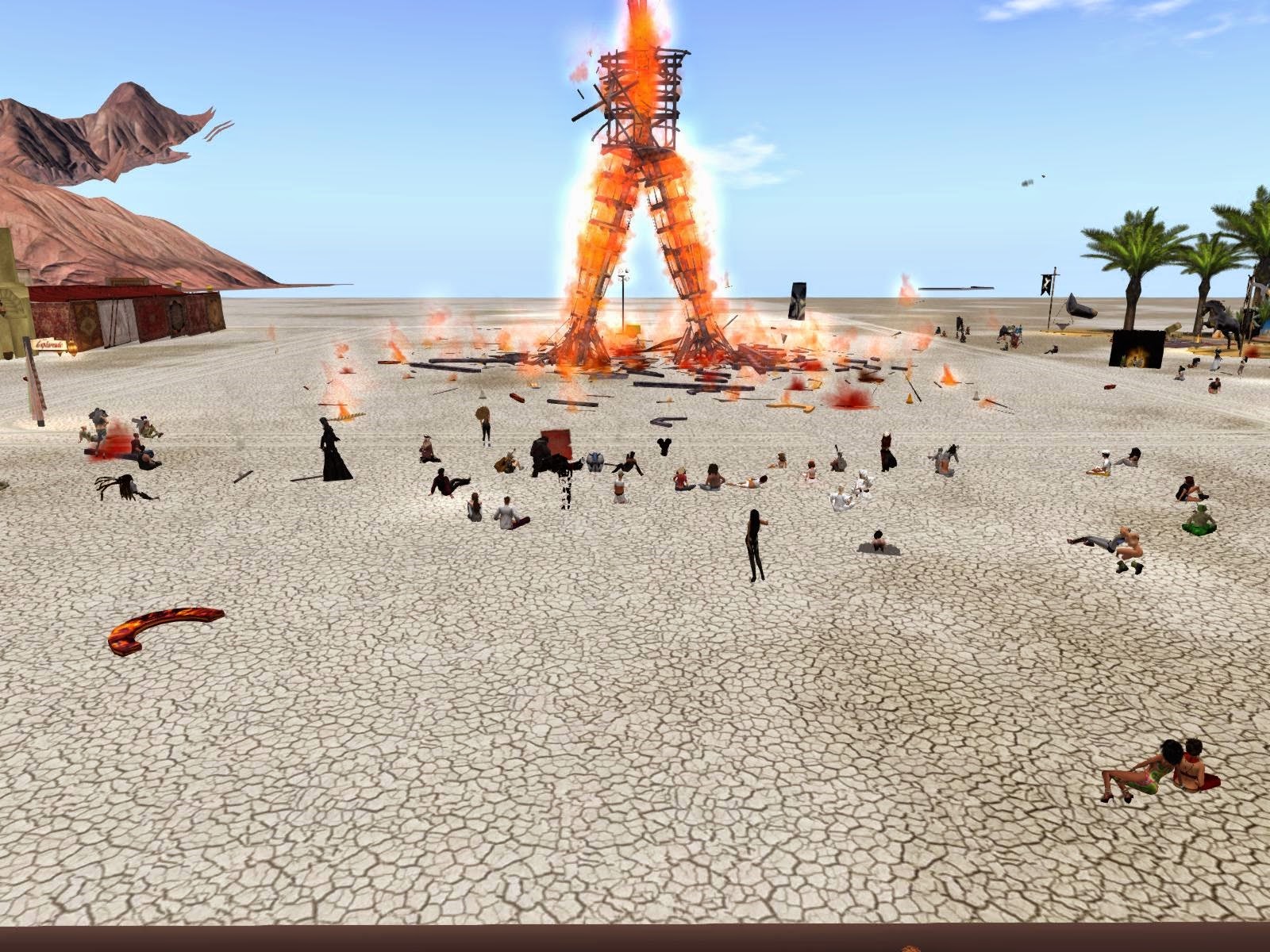 The burning is a slow process, but it was beautiful to see it. 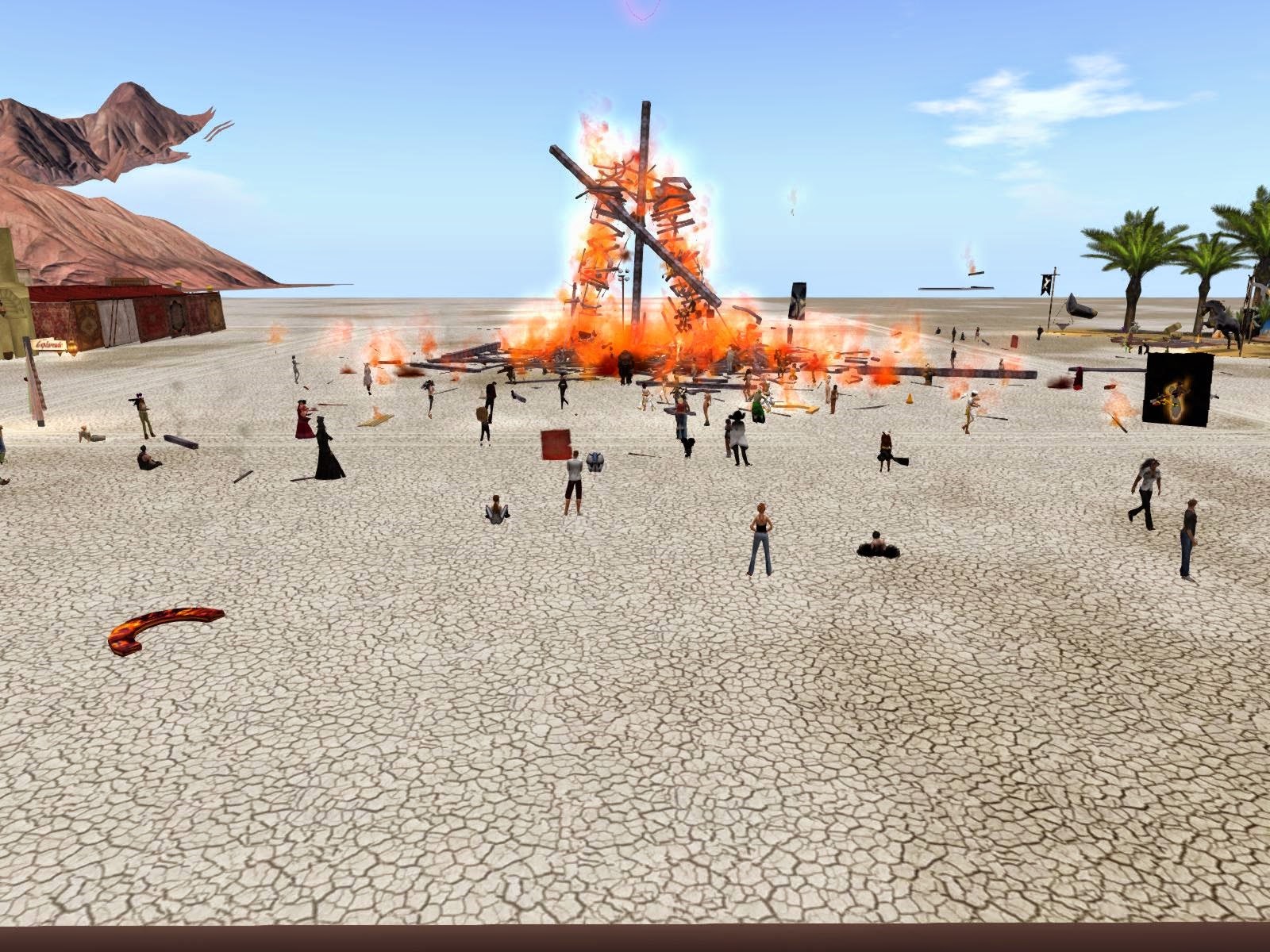 It’s quite an experience to see the virtual statue getting burned down ( virtually, of course ). 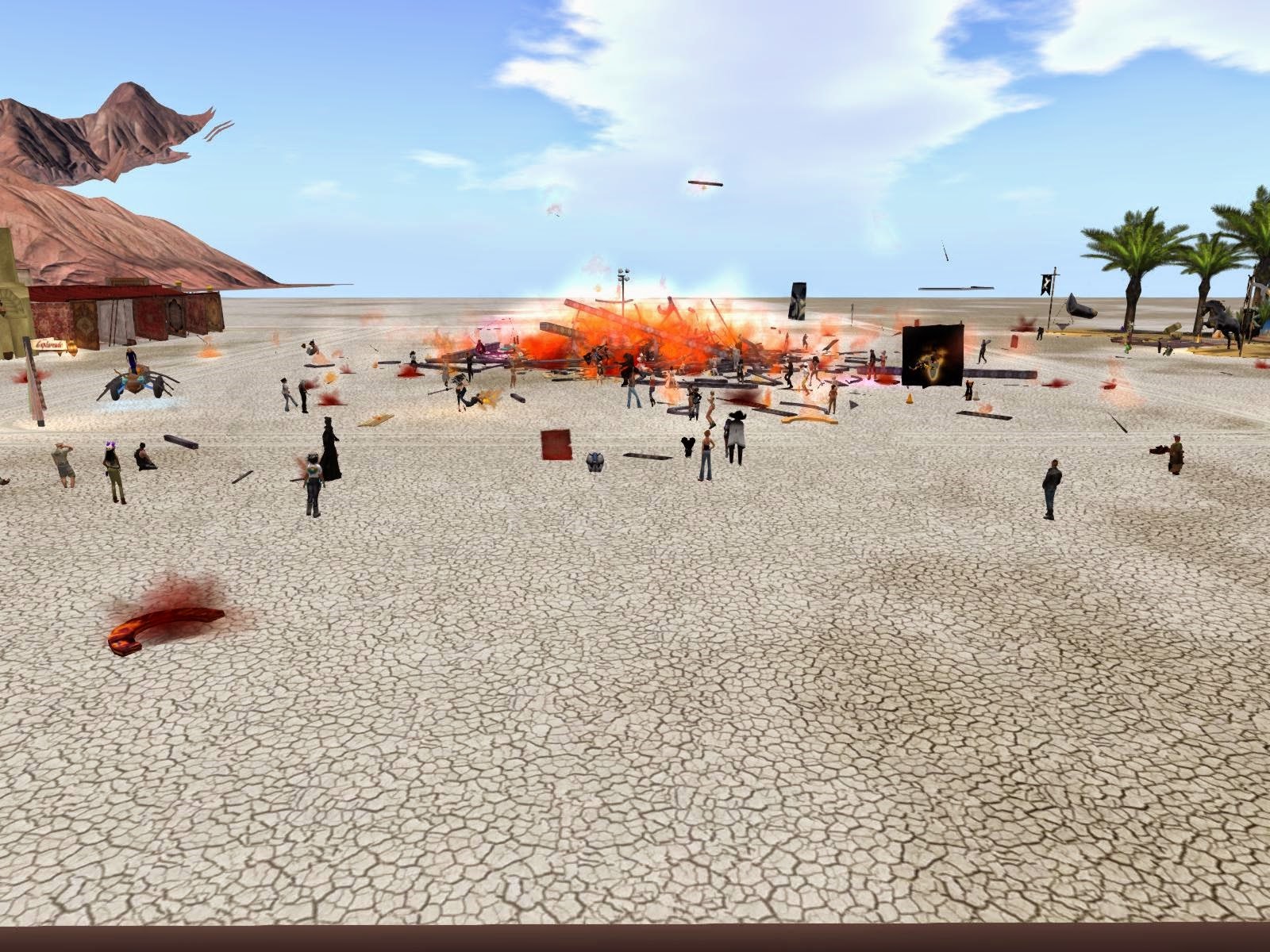 It must have taken much time to develop the scripts and textures to provide us with such a amazing effect taking place.
In my personal opinion, this is a cool event, it was my first time experiencing it and I must admit, I will be there next year as well. If you haven’t experienced the Burn2 event, you are too late for this year’s. But you can count down to the one next year if you like.
There is a group in Second Life called the “Burning Man 2.0”, which provides you with more information about the festival and also let’s you know when an event is taking place. Besides Burn2, the Burners have a few smaller events at other times during the year. 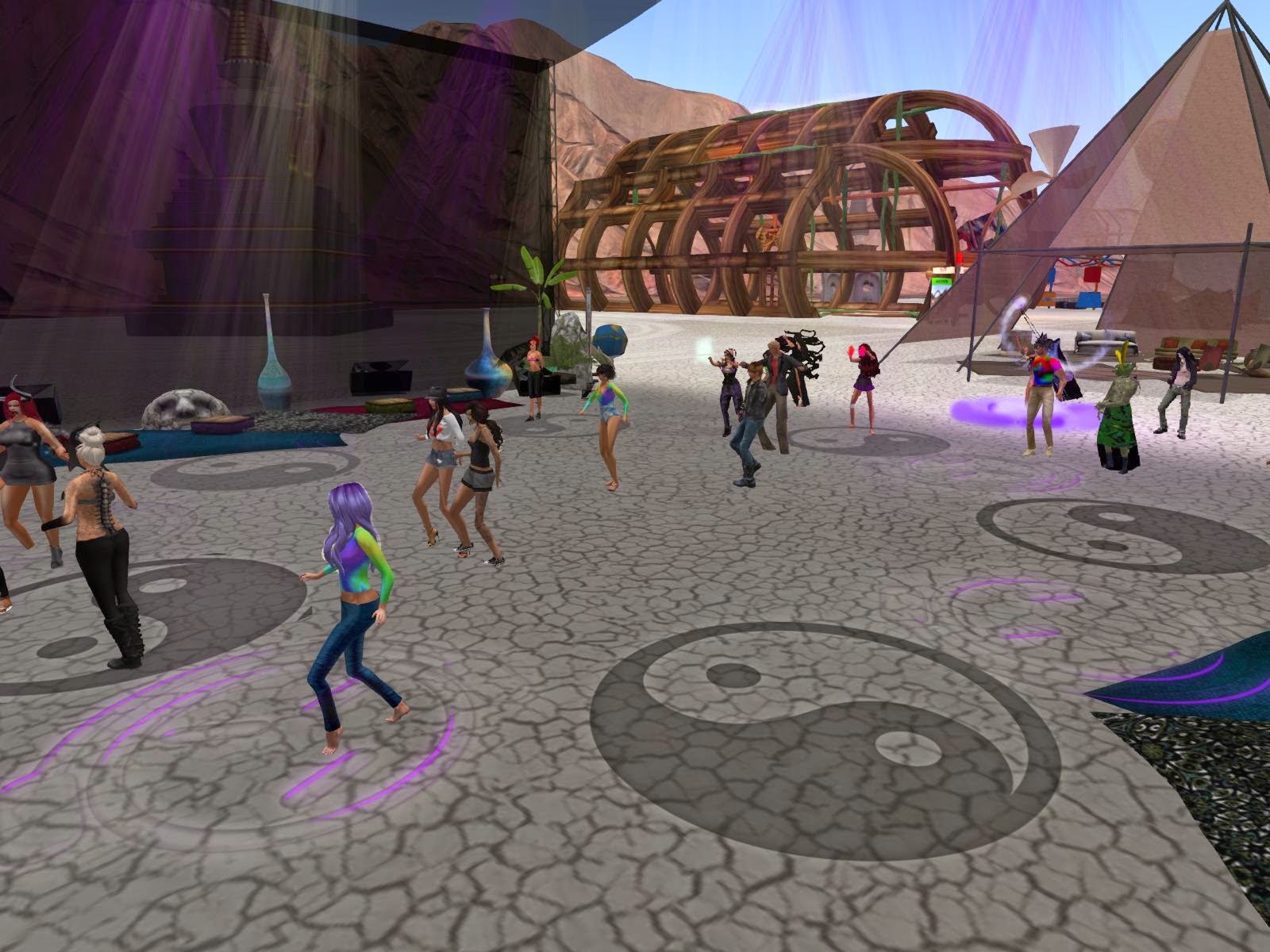 When the event is over they have a “Leave no trace” practice, which is one of the Ten Principles. The exhibits are left up for a few days for anyone coming late to see. Then everything is taken down, aside from the desert landscape. Not a prim that isn't part of a rock or catus is left behind.
The great thing about this event is that there's a lot to do. You can go to a disco, or just wander around where you want, looking at the exhibits and pondering the meaning of the art.
Having fun is the main principle that you need to keep in mind !
See you all next year at the Burn2 event.
Wesley Regenbogen