Most Americans are well aware that Iran's government is undemocratic, Islamist and punishing of dissent. But what not everyone knows is that not every Iranian blindly follows it, but a number question it, sometimes openly. Following the results of the June 2009 elections in which it was announced only two hours after the polls closed that the hardliners had won, the results were protests by both the supporters of the opposition candidates and spontaneous demonstrations by others in the public. The response from the regime was brutal, arresting thousands, whom often were tortured while in captivity, and killed many, including Neda Agha Soltan whose death was widely broadcast on social media, making her a symbol of the protests. In Second Life, it was announced there was a demonstration of support for the protestors. 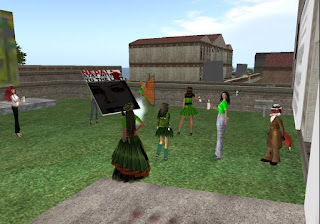 On Thursday June 25th, a number of people in Second Life in support of the protesters in Iran, whom have been speaking out against rigged elections despite the violent crackdown resulting in arrests and deaths. At 2 PM and 7 PM SL time, people gathered at the Palais Orleans Art Studio in the Roissy sim, many from the “Support Iran” group. A few held signs with raised fists on one side, and a picture of Neda, whom has become a symbol of the protests, on the other. The signs could be picked up in the Studio, along with memorial candles. The studio displayed pictured of Neda and the protests, and the people also passed around a green armband with a broken heart symbol. There were also “I am Neda” shirts.

One person at the first demonstration thought thirty to forty people showed up, some arriving a little late and some needing to go early, “We had a good turnout.” The second was smaller in number, but no less determined to make a point. There was also a security guard from the Justice League to keep any possible griefers away. 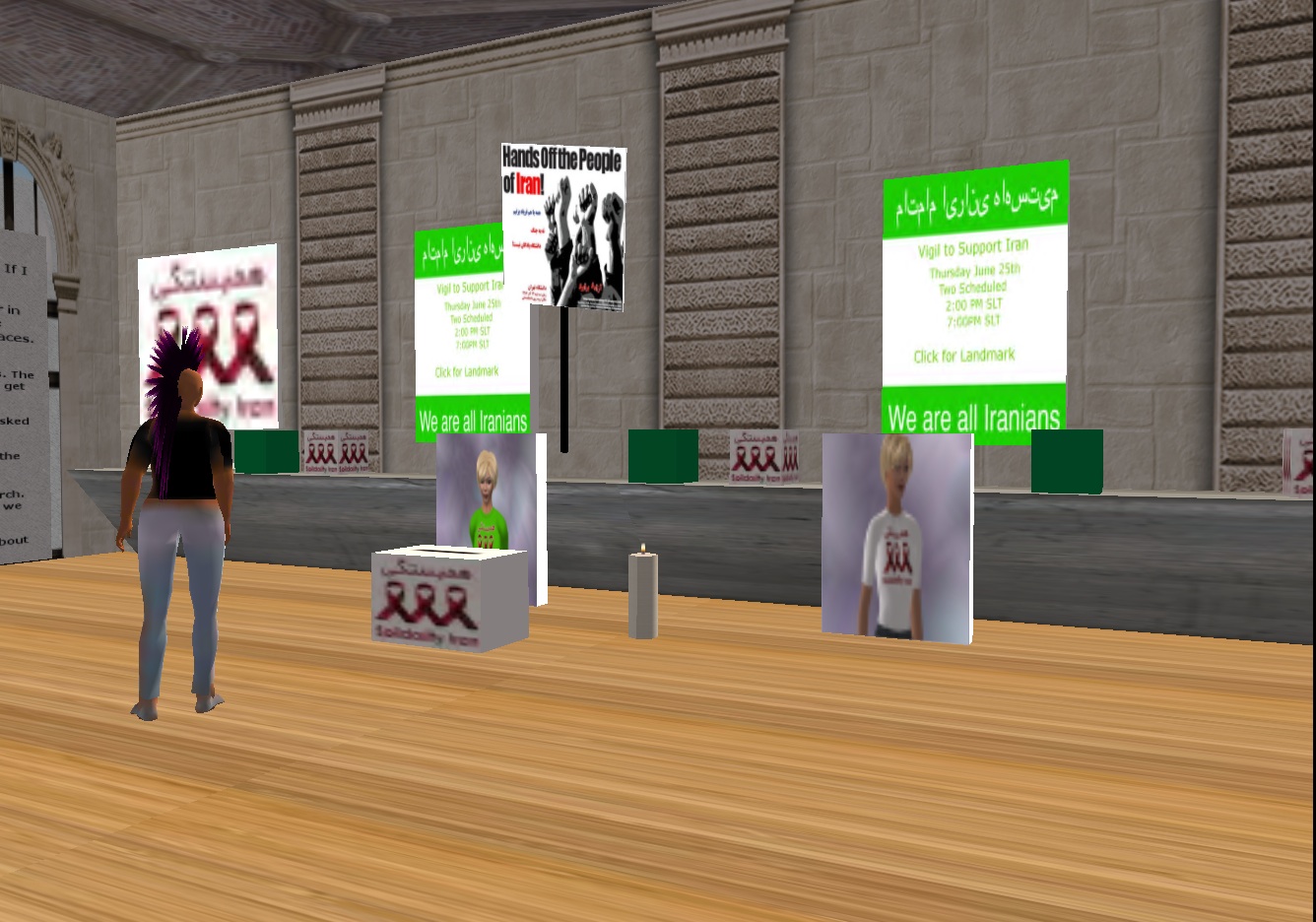 People were invited to make comments and give news they might have heard. Rene Grigorovich used voice instead of typing to make his point, “All these people are asking is for a free and honest election as is guaranteed by the constitution. .. the regime is absolutely bestial in how they treat the opposition. ... I would ask you all to keep these people in your prayers. ... thank you.”

There was one Iranian among the people in the second gathering, “I’m Iranian,” Melody Rosca told everyone. She was living outside the country. When asked how well Iranians could use the net, she answered, “I know that Internet connections have been next to nothing for the past day. I know that cell phones are shut off after 5 PM.” When asked if any SL resident in Iran could still get on, she answered, “All I know is that those I know are having lots of difficulty getting online and transferring information.” At another point, she spoke, “... it is extremely important for us, all of us, to remain aware. Knowledge is always power, and it’s no different in this turmoil.”

Thursday 25th was also the day singer Michael Jackson passed away, leaving some to wonder if the media coverage might distract the attention of the American public. Melody commented, “I’m afraid that just because there wasn’t as much news today, or perhaps tomorrow, or even a week from now, everyone will forget and just assume it’s over.“

The group talked about the role of Internet blogs and Twitter in helping the protesters get images and information outside the country. However, some described the theocracy as making it harder for the people to communicate with the outside world. Melody told, “... information is being filtered much more drastically than a week ago.” Someone else mentioned satellite dishes were being confiscated.

One man had a story to tell, “I have a personal stake in the protests. I’m in love with an Iranian woman. I don’t know if she’s alive or dead. ... I have not spoken to her since last October, when she told me she asked her father for permission to marry me. ... She and I had many low-level arguments concerning her government. At first, she thought I believed all Iranians were fanatics. Then when she realized I made the distinction between her government and the people, she still insisted that I was wrong, that is was not like that in Iran. She honestly believed Iran was a free country, and that her government would not actively harm her. It took her several years to begin seeing the truth.” 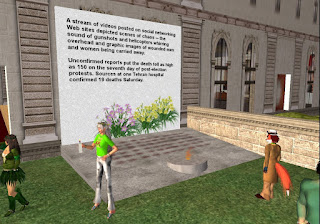 “When she told her father that we wanted to marry, he confirmed all that I had said to her and more. She broke off contact after one final conversation. We talked on the phone for hours that last night. ... If a pro-government militia ever found out she was in love with me, the girl whom got ******ed to death with a baseball bat would have been luckier. ... They’re chopping down protesters with axes and shooting them in the streets. What do you think they’ll do to a woman who’s in love with Iran’s proclaimed ‘Great Satan.’ ... My desert rose is much stronger than she thought she was. My greatest fear is she took to the streets. I decided within a few days of the election that if she called me, I’d be forced to say things I did not mean in order to convince any officials tapping her phone line that she no longer had any ties to America.”

Some were concerned, wondering at one point the possibility Iranian government agents were conducting searches in SL. Still, there was optimism, “It might take a generation ... but the Iranian people are seeing what their government is capable of now. The Iranian people overthrew the Shah and they will eventually overthrow the current butchers.”

Eventually, the vigil came to an end. People wished each other well, some vowing to continue. We were told the Art studio would keep the pictures of demonstrations and candles and signs, “for the foreseeable future.” Palais Orleans Art Studio and Designs is at the Roissy sim at (31, 58. 24).

“Freedom is worth dying for but dying is easy ask your selves is it worth losing everything for and possibly being tortured to death for? this is the question the brave freedom fighters of Iran have asked themselves. They said yes, and for that courage I stand with them.”

Sadly but not unexpectedly, the protests failed to change the result of the election. The response by the hardliners to the "Twitter Revolution" as it was called was to effectively shut down the Internet, bringing it back only after heavy censorship software was installed, and the shutting down of pro-opposition traditional media, in addition to brutally cracking down on dissent. In American politics, the Iranian protests became an issue when Republicans complained the Democrat President was refusing to act sufficiently in support of the dissidents. Within months, protests against the election results had been effectively quelled.

Bixy Shuftan
Posted by Bixyl Shuftan at 6:00 AM