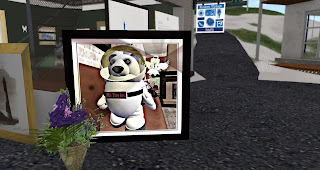 On Thursday May 21, Kat2 Kit, known as Matt Shapoff in real life, passed away. About a week later on Wednesday May 27, a memorial service was held for him at his art studio. "The little panda," as his friends in Second Life called him with his avatar of choice was that of a tiny panda, had been involved with many activities here on the Grid, and over time had come to know a number of people. This included yours truly, whom had written about him twice a few years ago.

Dropping in early at Kat2's studio at Montauk New York (128/157/24), which in addition to his cyanotype blue artwork now had a picture of him as a memorial, Petlove Petshop, whom he had worked with as part of Pooky Amsterdam's crew at "The 1st Question" game show, was already there. She described herself as "just mainly working on films" lately, and was interested in hearing how the Newser and I were doing. 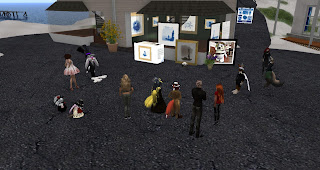 It wasn't too long before others arrived. Alexa Steuart, upon seeing Kat's studio and picture, emoted *sighs and wishes Kat was ....* Jillian Skinstad commented, "Me too. I still haven't accepted it. Does anyone know what happened?" Petlove told, "I heard he was doing some chore around the house and just... went. (I) haven't heard exactly what, don't know."

RJ Kikuchiyo told the group he would be streaming a video of the memorial service live over Livestream,  "Cynthia, Matt' s beloved, will be able to watch from out there. ... Matt was fond of it being used as a tool inworld, too." He asked the group if anyone else had done a memorial service in Second Life. Alexa nodded, "I have been to way too many wakes in Second Life." It was mentioned Linden Lab used to have a memorial sim, and the Sunweaver's remembrance of Artistic Fimicloud just days before. RJ told, "years ago now, I started a monument to our fallen avatar friends on mainland Linden land - they've allowed me to continue updating it."

It was about this time Pooky Amsterdam showed up. She greeted the group, followed by, "It's a sad thing to have lost Kat." "Gone but never forgotten..." Petlove commented, "I have one of his cyanotypes on cloth of a snap from a 'Fritos' commercial we made under the glass on my desk." A few minutes later, RacerX Gullwing of the Giant Snail Races showed up. Then came a surprise, "Look who's here! It's Hydra." Hydra Shaftoe, Pooky's cohost on the game show, appeared. I hadn't heard from him since he left. Pooky commented, "Hydra said that everyone needs a little panda in their life."

Pooky Amsterdam then read aloud a poem, which she also texted, "Epitaph on a Friend"

An honest man here lies at rest,
The friend of man, the friend of truth,
The friend of age, and guide of youth:
Few hearts like his, with virtue warm'd,
Few heads with knowledge so inform'd;
If there's another world, he lives in bliss;
If there is none, he made the best of this.

After that, people began telling stories about Kat, both in voice and in chat. Jillian commented, "I met Matt when I first came to SL to teach." Blitzckreed Levenque remarked, "Nobody else could get the mood up like him." 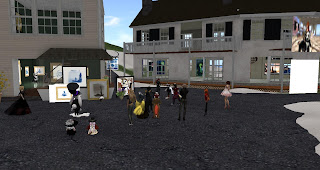 Panacea Luminos gave the following story, " 'I'm at requesting access to LISound New York to phototgraph the Montak Lighthouse RJ has built. I am a long island artist and have been collborating with RJ on real life 19th century prints I create using cynaotype and dyan dyke process non-silver processes.' Yes..RJ was our connector (smile). Attached was his artists statement, and that was interesting. But back in 2009 what really caught my fancy was this: 'I will be having a real life art exhibition in East Hampton this July, I would like to have a computer logged into Second Life during the Opening, with the avatar restricted to just investigating the Montauk Lighthouse.' And so it began. He opened my mind to some amazing possibilties in SL. He will be missed."

Alexa brought up, "I remember him from his dome on novi and building the train around his property. and being involved in tossing buses at him and pet and emmo on novi." Petshop responded, "That's right (giggle). He was truly an original." "Bus tossing at Kat good times," Alexa mused. Petlove looked to RJ, "RJ, you built the garage from 'Ferris Bheuler's Day Off' that time. If it hadn't been for Matt, I never would have seen that in SL." Jillian commented, "Matt was always dragging me some place. He always had a way of making things fun, interesting and inventive." "Kat was a FUN panda!" RJ reminisced. Pooky spoke, "He was a fun person & so full of life, it's too much, he is gone." RacerX Gullwing added, "Yeah, he was a great guy." 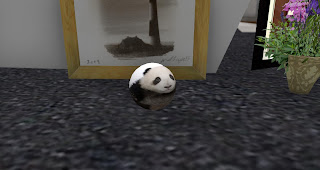 At this point, Pooky Amsterdam rezzed a ball with a panda picture, "The round panda ball is full of stuff of Kat and please take a copy too." To someone, she commented, "Oh emm gee, the alligators! He fought you as Mr Potato Head with light sabers to turn you into french fries." "Too funny." Petlove remarked. RJ added, "I can say that he would be very happy that you all  came today." Drusilla Poliatevska spoke, "It's clear he will be running around in our heads until we go."

At one point, Alexa commented, "Time for a river dance." RJ agreed, "Let's do something silly!!" And then everyone was dancing away, "I know this message of RANDOM is brought to you by one starry eyed panda!" Someone tried to wear an attachment, and ended up dancing while wearing a schooner, "wearing a sailboat (laughter)." A copy of the boat was placed in the water nearby, which had red Asian style sails, one with an image of a panda. A huge picture of Kat on his bicycle was also placed on the ground. On a nearby house, there were numerous pictures of him set up . 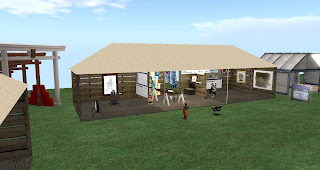 RJ told the group, "I should also mention that Kat2 Kitt's last prims are held on (the) mainland prim preserve near the lighthouse memorial, a link to the workshop where the 2015 booth was being worked on is on the gallery at the top of the montauk lights." RJ gave the link as Slapdoogle (170/35/3001), "RJ Kikuchiyo: and of course there is a memorial rock - in Linden's Blake Sea - Crow's Nest, where his name will be held (permanently)." 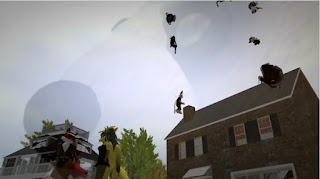 Then they got out a trampoline, and the bulk of the people started jumping up and down on it,  "Avatar tossed salad!" "Weeeee!" "Serious air!" "Woo hoo!" "How many can get on the trampoline?" Petlove, whom was still on the ground, chuckled "That's really funny to see you all doing that." Drusilla commented, "This is a fitting thing to be doing something very bizarre." Alexa mused, "Kat would love this. .. Take a movie, HOOOOOOOO!!!" Petlove did just that, "had to film a little bit of that (giggle)." A short clip of it would be placed at the end of an episode of "Happy Hunting" (link), "That thing was a perfect ending."

It was about this time that everyone began to say their goodbyes. Petlove had taken pictures of her own and posted on her Flickr (link). Pooky Amsterdam's message was the most poetic, "I'm going to go too, but say not good bye, say fare thee well. And we are faring always with Kat in our hearts."

"Thank you Matt Kat2 wherever you are."