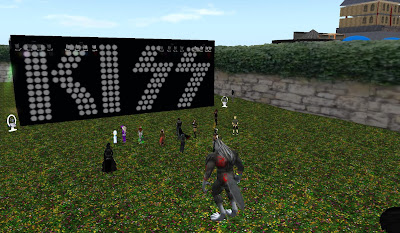 On Sunday July 26 at 2PM SL time, Primal Passions held a special event to raise funds for Team Sunbeamer for the Relay for Life. A "Kiss" Tribute band held a concert just outside the castle in the Sunweaver Estates. The event would go on for two hours until 4PM. 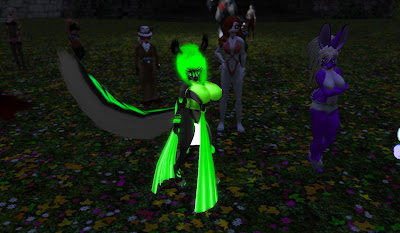 SUNBEAMERS Team is holding a KISS Concrt, today at 2-4 PM SLT on Sunweaver Bay, at he Primal Passions Club, Event is PG, for Pretty Good, but you still have to dress properly, so NO NAUGHTY BITS ALLOWED!  There is a Pre-Show with a Live DJ, verse a Dead One, starting at 1 PM SLT. 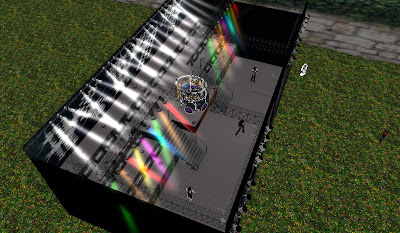 Although the Relay Walk had taken place a week earlier, this was not the end of the Relay season. A few parties and other events were still being held by the teams. The action that day actually started earlier with a DJ event inside the castle an hour earlier. But when the hour neared, the crowd went outside and gathered at the stage as more people teleported in while the band got ready behind the curtain. The musicians were Random Nirvana as Gene Simmons, Paul Stanley as Paul Woodrunner, Black Nefarious as Tommy Thayer. and Dagger Dagger as drummer Eric Singer. On both sides of the stage was a Relay for Life kiosk for Team Sunbeamer. 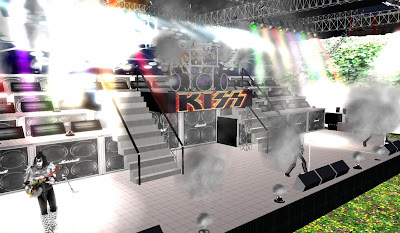 Finally at 2PM, the music began. One of the musicians shouted, "You wanted the best! You got the Best! ARE YOU READY TO ROOOCK?!!" The curtain quickly parted, there was  a flash of pyrotechnics on the stage, and the band began rocking it up to the cheers of the crowd. 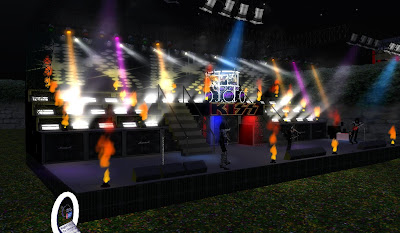 The music would go on for two hours in front of the large crowd, where furs and a pony mingled with normal human avatars. Among the people were the Sunbeamer team's captain (and chieftess of the Sunweaver Estates) Rita Mariner, and of course Rayven Tentigo, the owner of Primal Passions. 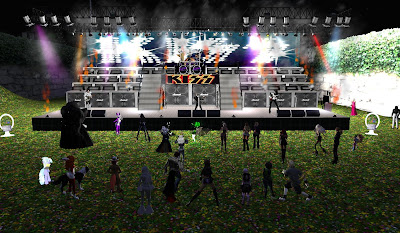 There were plenty of hard rock tunes, and plenty of fireworks on stage as flames went up in the air and pyrotechnics filled the air all around. The girls in the crowd joked about tossing panties onto the stage, and the band went along, encouraging them, "Lick it up!" 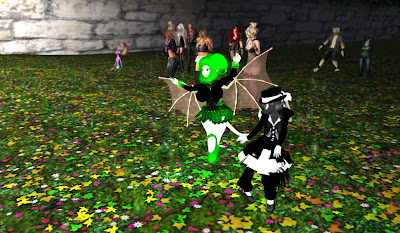 At one point, Rayven was dancing around on the nearby lion statue, which doubled as a tip jar for the club, "Wooooooooooooooooooooottttttttttttttttttttttttttt!!! Best way to spend a Sunday afternoon, with a killer concert and great friends, that all want to kick cancer's ugly a**!" At another, Random and Black got down from the stage to strum the guitars in the crowd for a minute. 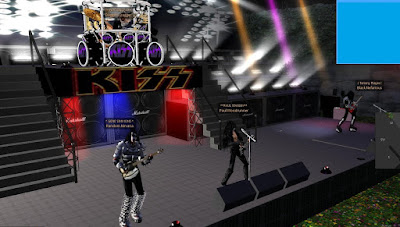 When 4PM came, the band did one more song as an encore. But after that last song, the guitars fell silent, and the concert was over. Rayven thanked them for their performance, "Thank you Rockshoppe for bringing the rock! We always love your concerts! And Kiss! WOOT! Thanks for showing up and showing out! Let's kick cancer's a ... behind, and donate what you feel you can ... Thank you Kiss and Rockshoppe, and everyone who came to stamp out cancer!" Paul shouted, "Primal Passionssssss, good night, good night! Ohmigod! WOOT! You've been great! Thank you very Muuuchhh! We love you all!" One woman commented it was a great concert combined with a great cause, having been a two-time cancer survivor. 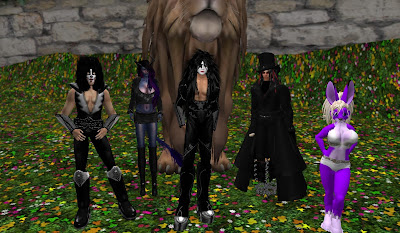 The band would hang around for a few more minutes, posing for a few pictures with Rayven, Rita, and a few others. But eventually everyone went their separate ways, many whom hadn't had enough music yet heading back into the club for more tuns and more dancing.

The concert raised over 5200 Lindens, Rita noting, "not counting what we raised inside before the concert."

As of the writing of this article, Team Sunbeamers has raised a total of 316,833, on the top half of the Gold ranked teams which include "Relay Wizards for Spunky" and Team Strange Journeys. Other teams having recently made gold include the Lanterns for Life and the Steelhead Salmons. Over the weekend, the Giant Snail Relay would also make gold.

Posted by Bixyl Shuftan at 3:00 PM