Last weekend on Saturday July 25 and Sunday July 26, the Roma community celebrated it's Neptunalia Festival. Over the two days, several events would be held. With Neptune being the Roman god of the seas, rivers, and horses, they would of course include water and racing events.

The Newser wasn't able to make it to Saturday's events. There were three in the schedule. 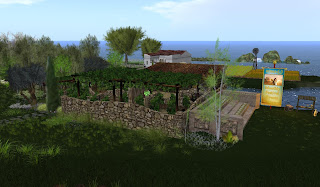 10am - Ludi Apollinares Ritual & Tavern Party
Our festivals this month begin with the celebration of Ludi Apollinares - honouring the God Apollo. Our ritual to honour Apollo will be immediately followed by a party in the ROMA Felicitas Tavern to celebrate the festival's beginning!

11:30am - Ludi Chariot Races
As Apollo races His sun chariot across across the sky, so our Agitatores will race their chariots in the Hippodrome! Come spend an exciting day at the races, and maybe even try to race yourself!

1pm - Neptune's Fishing Contest
Our third festival event kicks off the Neptunalia, the festival in honour of the great God Neptune. We will be holding a 7seas Fishing Contest, with cash prizes for the 3 top fishers! 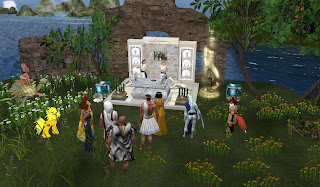 Sunday however, I was able to make it over. At 10 AM, the first event that day was a roleplayed ritual to honor Neptune, with two locals taking the role as priestesses.

"... and to You, Neptunus, before all other Gods I offer and accord You the highest thanks. I give You praise, for You know how to treat men fairly; this befits the Gods. Te hoc piscis ommovendo bonas preces, precor uti sies volens propitious illis Quiritibus te laudatis, quoius re ergo hoc sacrificium offero. With good prayers I offer to You this fish, may it be Your will to look with favour upon these folk who have honoured You, for which purpose I make this offering." 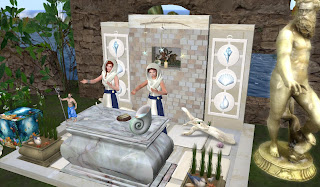 "O Neptunus, Earth-Shaker, Storm-Bringer! Preserve us from disaster, and shield us from all ruin. Grant to us calm seas, both upon the waters, and within our lives."

"Neptunus, Lord of Horses and Master of the Waters, bless our Citizens, and our Legion, most especially those who serve with ships and horses, who are Your special children. Bless also our great Imperator, Julian, our Censors and our Praetors. Grant them Your strength and Your protection wherever they may go. So You will, so it is!" 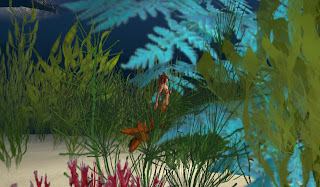 Following the ritual was the Neptunalia Mer Hunt. Some locals put on various sea creature avatars, such as mermaids, though there was also a seahorse avatar in the mix. Those playing the part of hunters wore the free snorkel provided, though one other donned a 19th century diving suit. The object for the hunters was to tag as many of the sea creatures as they could in 30 minutes. For the hunted, the object was to of course avoid being tagged. The aquatics got a head start, then the hunters dove in after them. A few stayed on shore, watching the action and chatting. Among them was a pony avatar, commenting that as Neptune was described as having introduced horses to Man, perhaps his presence wasn't so far out. 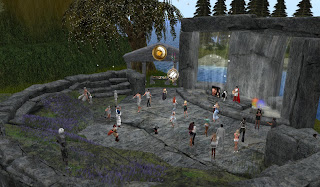 After several minutes, one, and then a second hunter came back up from out of the water. Tagging the prey wasn't as easy as it first looked, so they gave up. They joined those whom had been watching. Eventually, the thirty minutes were up, and everyone surfaced.

At 12 Noon came the "Sun and Sea Grand Feast." This was a live music event in which musician Maximillion Kleene place his guitar for the crowd, whom danced to his music. Maximillion wore a toga for the occasion as he strummed his instrument on stage. When someone sent a few Lindens his way as a tip, his cow-shapped tip jar would lean, in effect "tipping the cow." 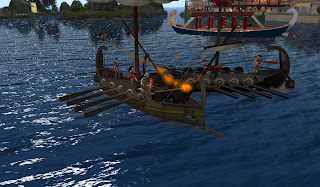 At 1PM was the final event, the Neptunalia Naumachia, or sea battle. Three ships, the Claudii, the Tiberii, and the Cornelii, and their
crews battled one another on the water with the other locals and visitors watching from a fourth, static ship, one munching on a fried doormouse.  Among those on the Tibeii, captained by Nina Tiberia, was Bandit Starrwolf, of whom the Newser recently wrote about his pub. With Rasberia Cornelia Daciana (rasberrykiss), they maneuvered the trieme, firing flame-tipped bolts from their balista, trying to ram the others when they had the chance.

Eventually, the Cornelii went down, and the Claudii and Tiberii duked it out, with Rasberia jumping aboard the other ship to do some damage. Despite the lady warrior's attack, both ships ended up inflicting enough damage to one another that they ended up crippled and aflame. But it would be the Claudii to sink first before the Tiberii went down moments later, and the crews had to swim for it. 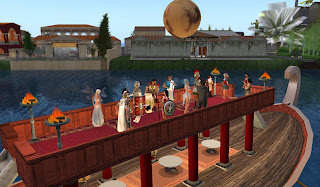 With everyone meeting aboard the observer boat, one of the captains commented, "I'm mad at you Nina. You led me to believe you are terrible at this. You were great!" Nina shrugged it off, "I give my thanks to a marvellous crew! Bandit and Raspberry." "May Neptunus, king of the seas enjoy these three ships," someone commented.

And with that, the festival was officially over, quite literally having ended it with a bang.