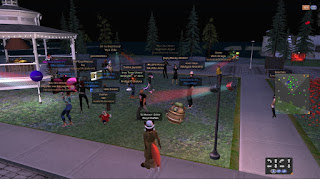 Almost everything in Second Life was created by the residents. But some things were made by people under Linden Lab. Things like the railroads and highways on the mainland are maintained by, and places such as the Blake Sea, Bay City, Linden Realms, Portal Park, and Horizons were created by the Linden Department of Public Works, often referred to as "moles." These are residents whom have been hired by Linden Lab for their skills at building or scripting. Besides being paid for their work by the hour, they get a special account with the surname "Mole." The name, according to the Second Life Wiki, comes from some graffiti in the original Second Life area early in it's history, "Beware the mole people!"

Except when one of their projects makes the news, moles can be excused for feeling overlooked. So the community whose home they made, Bay City, honors them every year in late January or early February in the Bay City Fairgrounds in the North Channel sim with "Mole Day." For it's first several years beginning in 2010, the event was held on February 2, or "Groundhog Day." Then it was changed to be held on a weekend day, either Saturday or Sunday, whichever is closest to the second day of February. Either day, it's one of Bay City's big events of the year, an event full of music, and a chance to meet some moles and Lindens. 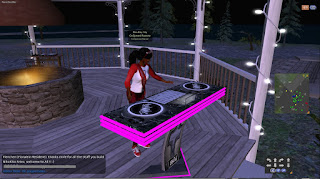 This year's Mole Day event started on Saturday February 3 at 11AM. The big stage that had been around for the first several years was replaced beginning with last year with a smaller gazebo. DJ Gospeed Racer, or GoSpeed Raser as she's been calling herself sometimes lately, was spinning the tunes for the first hour. While she's been playing for every Mole Day that I've seen, this year she was doing so as Miss Bay City, wearing the sash and tiara for the event.

Also there were a number of other Bay City regulars, such as Kennylex Luckless, Erik Mondrian (Bay City's own red Lusk fox), Uccie Galway (Uccello Poultry). Others dropping by included Relayer Oldsoul Eldemar, former Newser writer Any1 Gynoid, and Sunweaver chieftess Rita Mariner. There was also one "Lost Prim."  And there was Bay City's leading citizen Marianne McCann.

And of course there were the moles and Lindens. There was Abnor Mole  in a tiny avatar with a hammer. There was  Ancient Mole in an avatar looking like a tiny blue critter. Magic Mole looked like a tiny monkey. There was Dyna Mole in a barrel-shaped robot. There was Garden mole in a short purplish avatar. Squishy Mole was a human with a bunny ears headset. Of the Lindens, Dee Linden was there representing them, looking a bit like a big fairy with her butterfly wings. Any1 told everyone, "I was Any Mole on the Pathfinding Project." 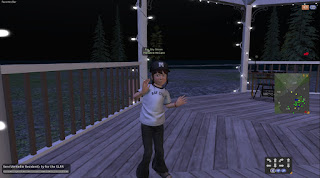 "Mole Day is The annual event to honor the Linden Department of Public Works, the 'moles', who make things across Second Life for us to have fun and frolic in," Marianne told the crowd, "Bay City was the first such area made by the Moles proper, so we opt to celebrate their great works every year, just around Groundhog Day. 'cuz Groundhogs ain't got nothing on Moles!" Dee Linden pretended to miss that, "What's that, Marianne?  I didn't quite hear you. Please repeat?" Marianne mused, "I said, Generalimissio Fernando Franco is still dead."

"Doesn't matter what you moles wear," Dee Linden told them, "just as long as you HERE." "Really?" Abnor mole asked.  "'cept you, Abnor." "I mean... really?" "It very much matters what YOU wear." One complemented, "You're the 'mole-iest'." The little blue guy was touched, "Aww." "Thanks mole for all the stuff you build,"  "I literally squee when each one of you show up, ty Moles. really each of you are awesome! Hi-five!" "Abnor, your Routes are the best ones!" "All you moles have excellent avi's!" "If it wasn't for all the moles hard work SL would be a much duller place." Abnor Mole answered, "We love doing it!" Garden Mole remarked, "Hopefully we fixed the roads to nowhere and hooked up the ends (grin)." 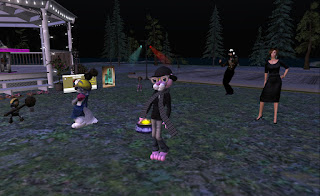 GoSpeed played a selection of songs, mainly pop music, Dee Linden saying, "So very much loving the musical selections!  Please don't forget to tip GoSpeed Racer -- any amount, from L$1000 to whatever your heart desires (grin)." But there were a few mole themed selections such as "I Am A Mole And I Live In A Hole" by the Southlanders, and the "Moley Scene" in the Austin Powers movie "Goldmember." That got a few chuckles and "Yeah, Baby!", "So you're the moooole," and "MOLEY MOLEY MOLEY!" remarks. When "We Built This City On Rock And Roll" played, Abnor Mole sang, "We built this city on primmms from moooooles!"

It was noted that GoSpeed now has a book published online. Vick Forcella shouted, "Happy happy Gospeed with your book publication!" Angela Galway (Angela Seale) cheered, "We need an SL version of Sherman from 'The Critic' of Gospeed, 'buy my book! buy my book!!!' " "Gospeed!!! Congrats on teh booklaunch!!!!!"

People continued to come in over time. "Look at all these beautiful people!" "Glad you could show up, these blue names are the ones making SL awesome." GoSpeed encouraged those further away to come closer, "Plenty of room up here for you pretty people out in the distance!" 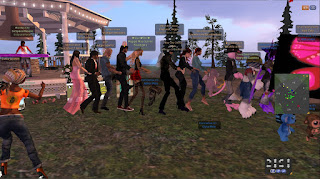 And there was the congo line, "I should have bet you'd be dancing the conga .... (grin)" "Mouselook in the conga line is FUNKY!" I'm dizzy (kaughter). Cant watch the conga line hahahaaaa!" "Dizzy watching it?  You should be in it." Someone joked, "It is hard to take pictures of moles without taking accidental upskirt shots." The robotic Dyna Mole quipped, "Don't you DARE shoot up MY skirt. (grin)"  Any1 joked, "! want the Mole Embarassing Photo Calendar (laughter)." The person who started the joke commented, "Well, it isn't upskirting the moles, it's upskirting the people around the moles since the moles are super tiny and dancing next to people in skirts." 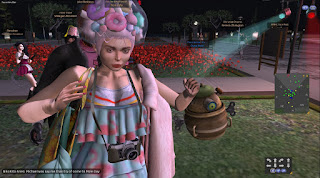 Abnor Mole poked fun at his tiny blue avie, "I'm bluuuueeee... yes I'm bluuueeeeee......" Dyna Mole in his barrel-like avie responded, "Do I look fat in this outfit?" Kennylex Luckless countered, "Dyna, do more sit ups to get rid of that cag and to get a six pack." One guy joked he was about to "tests the molarity." After Marianne came back from a crash, someone joked, "Chain Marianne to the floor so she don't crash." Dee Linden went with the funnery, "No chains!  But I have fancy duct tape!" 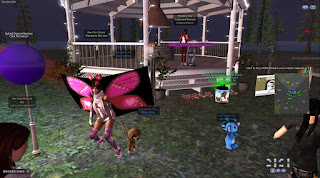 At one point, Uccie shouted, "Quick! Everyone, on the count of three, say your favorite Mole build!" After "Three," people gave a few answers, "Mainland!" "The greenhouses!" "The molar coaster!"  Then Any1 mused, "What would be funny mole names? Like UnscheduledMaintainence Mole. … He smokes in the data center and nobody knows why? (laughter)" Others began adding to the joke, "EnyMeinieMiny Mole?" "My favorite name: Guaca Mole (grin)." Garden Mole reminded everyone that name had been real, "Guaca, blast from the past. Undercover Mole was a good one." "Mystery Mole." "Star mole would not be that funny but an actual animal." Any1 suggested, "Saucy Mole (pronounced molay) ... Robo Mole .. Russian Mole ...Slacker Mole ... Lagfest Mole ... TooMuchCoffee Mole ... TheMooch Mole. ... Bratty Mole ... Spanky Mole." "Is there a digital mole yet?" Uccie joked, "My Mole name would be Excised Mole." GoSpeed jokingly suggested, "Millenial Mole." Kennylex remarked, "I wait for a Holy.Mole but there exist a Holy.Moleno (smile). ... Day.Mole? By the way, why is there not a Sekreet Mole?" Uccie joked, "I thought you were Seekret Mole, Kenny." Dee Linden mused, "Kenny, I'd tell ya but it's a seekret."

Eventually, GoSpeed ended her set with the closing theme of "Mystery Science Theater 3000." Marianne shouted, "Everyone, Thank GoSpeed for an AMAZING set today! Coming up next will be Stratus Mactavish." "Yay! Thank you GoSpeed! My favorite DJ!" 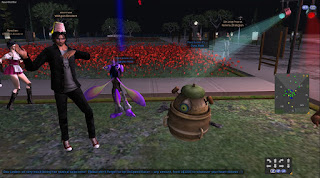 The jokes and wisecracks would continue, Abnor Mole saying before going on break, "Be right back. Need some wormjuice!" A few made faces, "Bleah Abnor! (grin)" "Abnor Weird." "I now know more about mole beverages than I ever wanted to know." Uccie asked, "Has anyone counted all the mole holes in Bay City? Sounds like a project, to me."

With the Superbowl the following day, someone ribbed fans of a football team, "It's so nice that people and even Patriots fans get to enjoy the mole builds." He got a few reactions, "Hey. Leave the Patriots alone ... (laughter)." "I AM a Patriots fan!" "Give someone else a turn Patriot fans (laughter)."

With GoSpeed in her sash and tiarra, Uccie remarked, "So many former Miss Bay City title holders here AND Miss Bay City herself! We choose a new one annually to represent The City By The Bay during our Hot August Nights event. Could it be YOU this year? ... I think Dee Linden should run for Miss Bay City." "I'd vote for Dee," GoSpeed joked. Abnor Mole mused about looking for a swimsuit for the next competition. Kenny joked, "I think Magic Mole shall run for Miss Bay City title." Magic went along with it, "It's on my to do list." Uccie then turned the joke, "Or Kennylex could Miss Bay City could be MISTER Bay City, you know."

Oldesoul got into the act by appearing in his tiny avatar and police uniform, "ALL RIGHT ALL RIGHT !!! WOT IS GOING ON HERE !!!! Da pawlice have arrived. ... Now any funny bidness - I haz mah warrant book !" 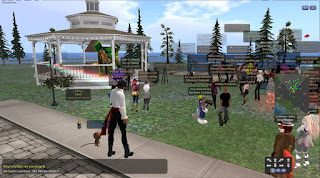 There was one noted former Linden mentioned whom had been close to the moles, Michael Linden whom had left Linden Lab in the past year. "Do you know if Michael is coming ...?" Uccie would ask, "By the way, if Michael Linden's civilian self is here or if anyone knows him, please let him know I miss him and hope he's well. Big part of Bay City history and my life." Dee Linden told her, "Uccie, I absolutely will!"

At one point, Marianne reminded everyone, "Bay City turns TEN YEARS OLD this very year!" The event, held in May, means the community has a little more than three months to prepare for it's biggest parade in years. But you won't have to wait that long for another event in Bay City. Around April Fool's Day is "Everfest," named after their late neighbor Ever Dreamscape.

I had to leave shortly before the end, but no doubt everyone had a great time on this day to celebrate "the other blue dots on the map."