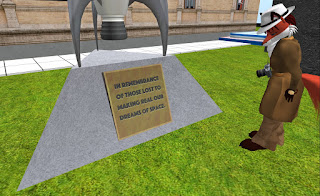 Monday January 29 was Space Remembrance Day for the National Space Society in Second Life. The day is one to remember those who gave their lives in Mankind's quest to explore space, notably the Apollo 1 and Shuttle Challenger and Shuttle Columbia disasters. The date was different from NASA's event on January 25 as they didn't announce it until January 23 two days earlier, which was too late for the NSS chapter in virtual reality, "As usual, NASA gave little to know advance warning of their observance, which was last Thursday." So they made plans for their own date. The 29th was chosen as it was the last Monday of the month, they hold regular meetings every Monday, and there was the opinion that future space settlers might make the day a holiday. 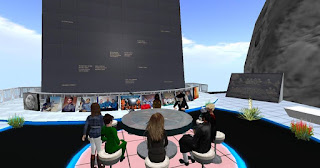 The event took place at 4PM, following the NSS's regular weekly meeting, at a location in the NSS sim where several memorials have been placed, large and small at National Space Society (103/124/3005). Some of the conversation was in voice, but Archivist Llewellyn sent the Newser a transcript of the text. Besides the somber remembrance, it was also brought up that this May marks the 60th anniversary of America's first satellite (https://explorer1.jpl.nasa.gov/), "Explorer I ... That was the first successful US satellite launch, and it discovered the Van Allen Radiation Belts around the Earth. It had a highly-elliptical orbit that took it much farther out than the first artificial satellite, Sputnik, launched by the Soviet Union." The music stream had a "special memorial playlist" playing to February 2. 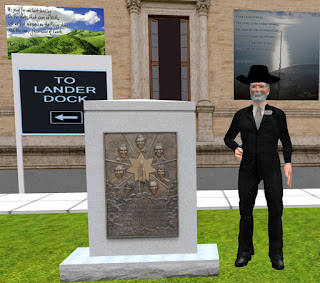 Besides the fallen astronauts, people notable to space whom had passed away in the past year were also mentioned, "We're also looking to include those dreamers, artists, and writers who inspire us. One of them who passed in the last year was Jerry Pournelle. ... Pournelle not only wrote science fiction, but he was one of the responsible parties to bring space defense to the table in the Reagan years, with the 'Citizen's Space Initiative." That had major effects, may have helped lead to the collapse of the former Soviet Union even." "We lost Ian M. Banks sometime ago. he inspired Elon Musk enough that he named his first stage recovery drones after a couple ships from Bank's Culture series." Another mentioned was "Jordin T. Kare (October 24, 1956 – July 19, 2017) was a physicist and aerospace engineer known for his research on laser propulsion. In particular, he was responsible for Mockingbird, a conceptual design for an extremely small (75 kg dry mass) reusable launch vehicle, and was involved in the Clementine lunar mapping mission. Kare was also known as developer of the Sailbeam interstellar propulsion concept and, in the science fiction fan community, as a composer, performer and recording artist of filk music." 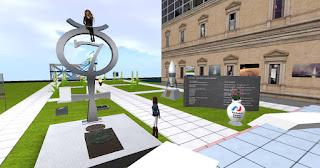 There were five former astronauts whom died in the past year mentioned, "We are coming to an era where we can't keep track of the passing of every former astronaut, but this year we did lose four of particular note. Eugene Cernan (March 14, 1934 – January 16, 2017), the last human on the Moon, Paul Weitz (July 25, 1932 – October 22, 2017), Skylab 2 astronaut and Space Shuttle Commander for STS-6, Richard Gordon Jr. (October 5, 1929 – November 6, 2017) Gemini 11 Pilot and Apollo 12 Command Module Pilot, and John Young (September 24, 1930 – January 5, 2018) Most prolific astronaut: longest career, first to fly six missions, only person to fly four classes of spacecraft, and more. Now that we've lost 'the astronaut's astronaut,' it truly is the end of an era." "I think it was said that John Young smuggled in a sandwich to Gus Grissom for the suborbital flight." Also mentioned was "Bruce McCandless II (June 8, 1937 – December 21, 2017). He did a lot of things, but he's probably most recognizable as the first American to leave a spacecraft un-tethered, in the then-new Manned Maneuvering Unit (MMU). The photo of him floating, relaxed, alone in space over Earth, is a classic." 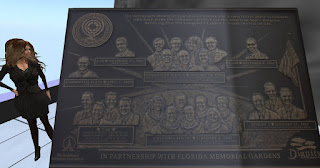 Of America's three space disasters, the Challenger was the one that hit hardest as it was televised live, "I was shaken to my being at the loss of our hopes and dreams down here in the bottom of the gravity well." Of the Apollo 1, someone mentioned, "No one understands the flaw in Apollo One is in everyone's new auto." There was also a quote about the Challenger disaster attributed to me when talking about the 2014 NSS Remembrance Day, "One friend of mine described the Challenger accident as a turning point in his young adulthood, his confidence in the Space Program, in which he saw the future of humanity, had been dealt a blow to the point he would not see it quite the same way again. This is one event serious space fans, and former space fans, in Second Life, might want to check out." 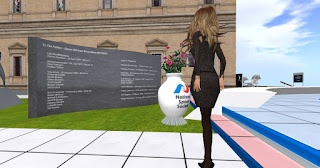 Near the end, Archivist gave the White House's statement of the official NASA Day of Remembrance, "On this year’s Day of Remembrance, we honor the brave men and women of NASA who lost their lives in our Nation’s eternal quest to expand the boundaries of human potential. The dedication and sacrifice of the Apollo 1, Challenger, and Columbia crews, remind us of the true bravery and resiliency of the American spirit, and the challenges we boldly face to reach higher for all mankind. America’s leadership in space is not without cost, but we have met tragedy with perseverance and challenge with achievement. We will not forget the contributions of our great American heroes as we build on their legacy to reach vast and exciting frontiers."