True to form, New Toulouse dished up another resplendent "Samedi Gras" celebration earlier this month, on Saturday the 10th February. The carnival season coincides with that held in New Toulouse's RL shadow, the city of New Orleans, Louisiana, and it is always well attended, attesting to the historical status of this sim in SL and the popularity of the event. 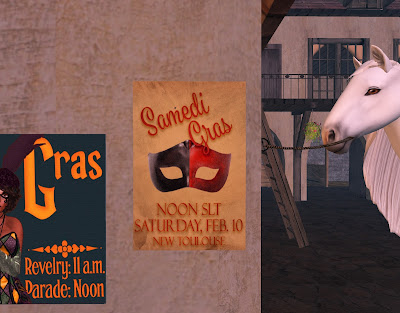 Along with the annual New Toulouse hunts, it's one of the highlights of the year. Festivities begin with events in the week leading up to Samedi Gras: Masked balls, float decorating parties and parades come to a head when the authentically modeled French colonial streets are hung with purple, green and gold, and play host to an epic float parade. This is typically a huge technical challenge, tackled with dedication and humor by the Krewe captains. 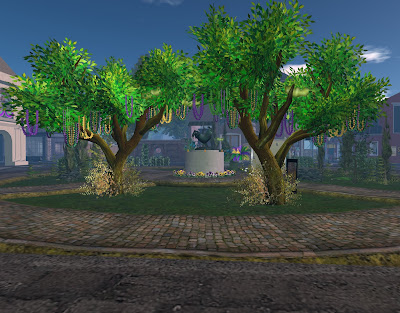 The parade was scheduled to kick off at Noon, by which time the floats were lined up along Shotgun row, with their horses, unicorns, pegasus and various mythical draft animals rearing to go. The crowds kept piling in, at least 50 avs packing into the sim before the parade had even started. I was riding with the fiery Krewe des Flambeaux for the second year running, drawn by a pair of white horses ably driven by long-standing talooster, Francesca Alva. 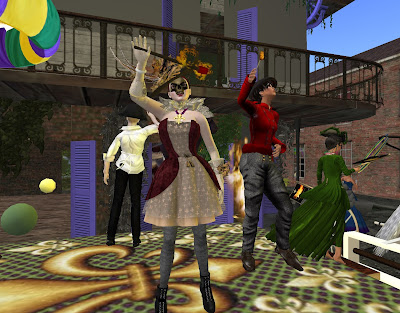 Last year, the start was very much delayed with technical difficulties but, this year, while there was lag and a few crashes, we got moving around 12:20 amid cheers from the bystanders - "Laissez les bons temps rouler!" Residents, turned out on their porches and balconies to watch the parade throw beads and offer refreshment to the revelers as they passed.

DJ Outlaw kept up the patter and filled the airwaves with a steady stream of spicy New-Orlenian classics that made the whole event feel as close as could be to the real thing. 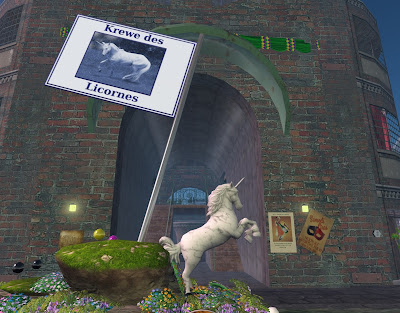 Apart from some interesting amalgamations of floats piling up at points along the route, and minor damage to some buildings on street corners that proved a little too tight for the tottering vehicles, the parade was successfully concluded around 1pm, with floats drawing up around the town square and krewes disembarking for a party in the park. The Mayor of New Toulouse, Henri Godenot, was there to greet them, and it was a chance to socialize and admire the effort that had gone into some of the costumes. 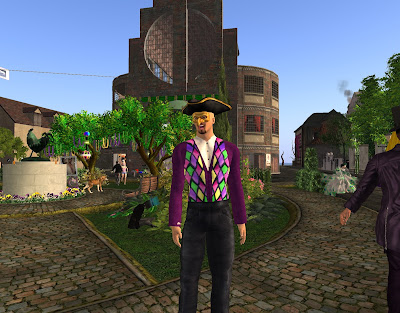 A good time was had by all, and it was gratifying to see that the affection for this unique sim and its events is still alive and kicking. 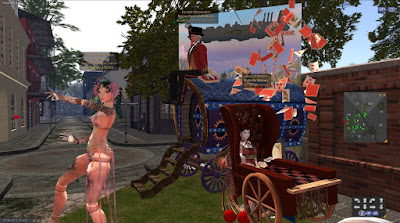 Editor's Note: Among those who had a float in the parade was Baron Wulfenbach and Baronin Zantabraxu.  Zantabraxu had a well done avatar of Tinka the Muse of Dance from the "Girl Genius" graphic novel/online comic.
Posted by Bixyl Shuftan at 6:00 AM