Scenes From The Relay: The Club Crawl and Bid Me Mesh

On the weekend of Friday June 8 to Sunday June 10, a number of Relay for Life events took place. The two I attended were the Club Crawl and "Bid Me Mesh." 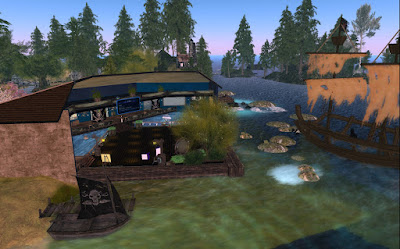 The club crawl was the second annual one organized by team Harmony of Hope. For those who don't know what a club crawl is, it's a Second Life version of a pub crawl in which a person or group of persons go to a number of clubs in a short time, spending a little time at each. 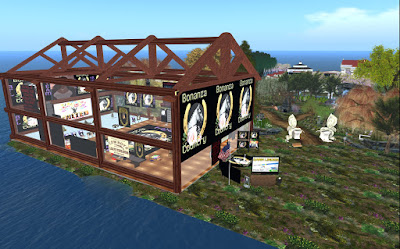 Team Harmony for Hope had the pirate-themed "The Club" raising donations for them at Yes (67/79/23). Two other teams with three other clubs joined them in the crawl. These were Team Bonanza with Club Bonanza at Saphire (186/230/22), and the Sunbeamers with Club Cutlass at Sunweaver Bay (114/117/757) and the Happy Vixen beach club at Purrfection Estates (236/219/24). With three teams and four clubs, this year's crawl was a little smaller than the first. But those taking part were optimistic for success. 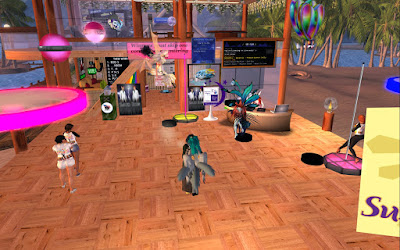 The first event took place at the Happy Vixen at 4PM SL time. It was a small crowd, "The Vix" not normally having Friday events at this time. Among those there were Harmony for Hope's team captain Dianna Wycliffe, as well as event organizer Cathy10 Longoria dropping by. DJ Snowbuns played the music for this special event, with Kitacella as the hostess. 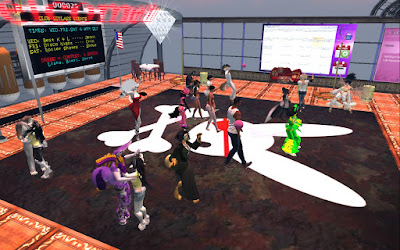 At 5PM, those visiting went on to the Bonanza Country Club. At 6PM, the crawl moved to Club Cutlass. 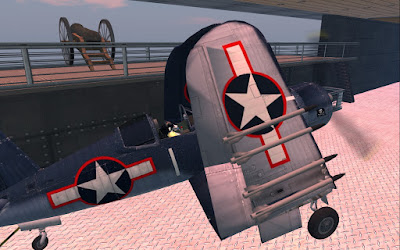 Cynthia Farshore, who was getting her Farshore Field ready for the air show the following week, arrived not by a teleport, but by flying in on the deck beneath the dance floor. 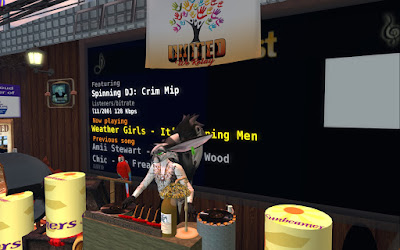 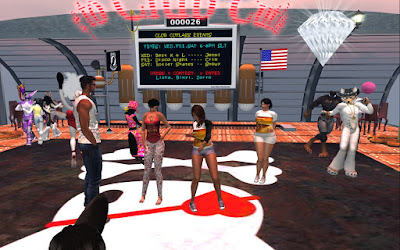 Besides the Cutlass regulars, a number from Team Bonanza and Harmony for Hope showed up for an hour before heading to "The Club." It was a great night for the Sunbeamer team, of which Rita announced the results in Relay for Life Volunteers chat. 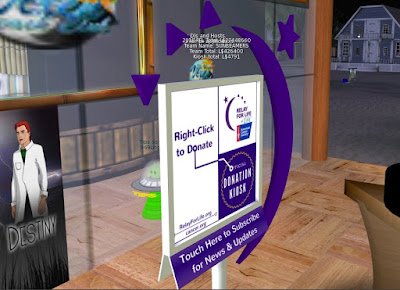 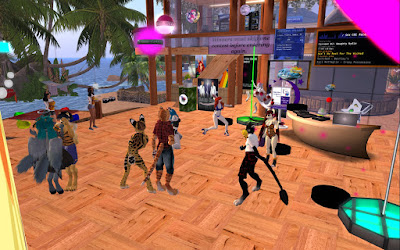 The following day, Saturday June 9 at 4PM, was the second half of the crawl. Club Bonanza was first at 2 PM. Then at 4 was the Happy Vixen. 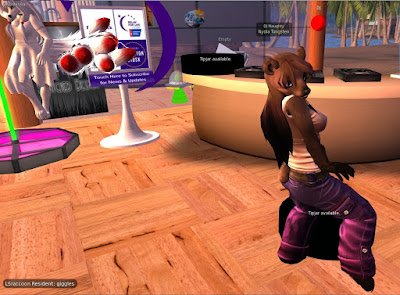 The theme of the party was "Lions, Tigers, and Bears." So DJ Nydia, substituting for DJ Tech, decided to "bear" it all with her ursine avatar.


It would "bear in mind" to her to do a short video. 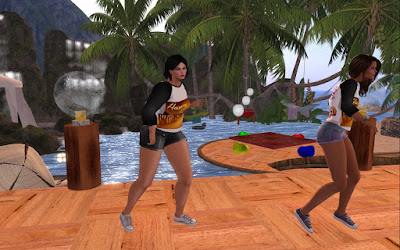 Dianna and Cathy were partying it up again as representing Harmony for Hope in the Sunbeamer-hosted event. 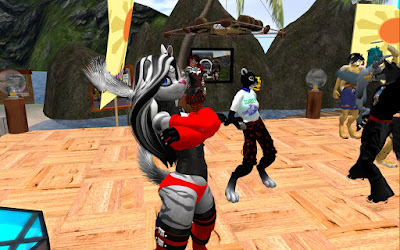 Valkyrie Ice McGill stood out in her tigerstripped skunkgirl avatar. There was a contest for best avatar, won by Kylee Gracemount. 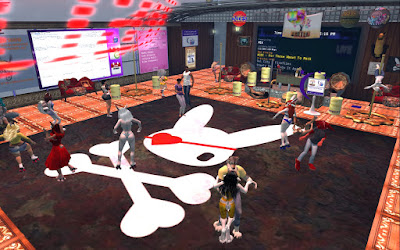 At 6PM, the crawl headed back to Club Cutlass. DJ Snowbuns spun the tunes for the second time for the fundraiser. 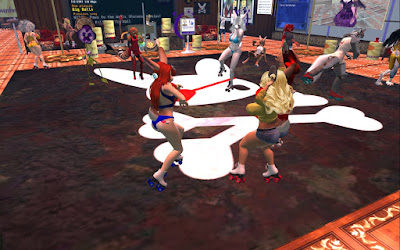 The theme was roller skates. So some of the girls got into theirs. 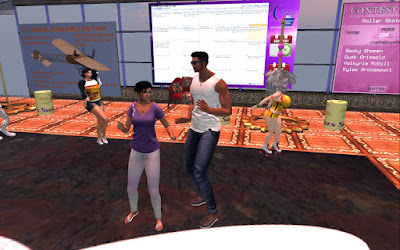 The people from Harmony for Hope and Bonanza were there again. 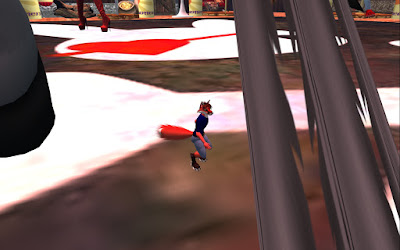 At one point, someone in a micro avatar had to dodge the skates. 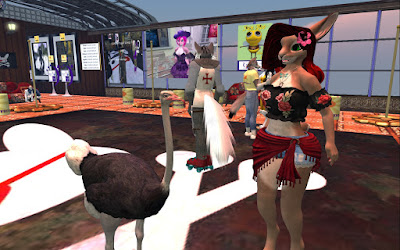 At another point, we had an ostrich showing up. An ostrich? 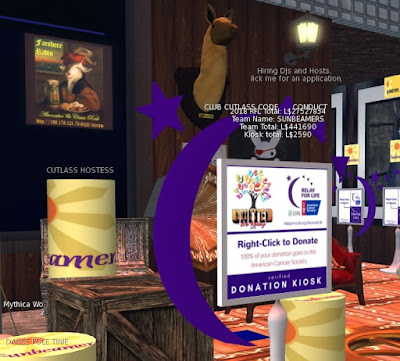 The final event of the Club Crawl would be at "The Club." Back at Cutlass, there was a little confusion at first about how much was raised at Snowbun's event. But as this kiosk shows, she and Nydia combined raised about 15,000 Lindens on day two, for a combined total of over 40,000 for Team Sunbeamers over the course of the Crawl. Rita would post an announcement later that night.

Beamers:  I am so proud of this team, I could just cry. We are within easy striking distance of Sapphire now.  59,000L to go.  So our two volunteers should look into going for PURPLE! I love you peeps.  I never imagined we we reach Jade, much less hit Sapphire.  This is sooooo  awesome!  We have fun along the way to these levels, plus RFL and ACS get donations, so this is a win-win for everyone! Go Relay!  Go Sunbeamers!

The other two teams in the Club Crawl also did very well. Cathy would announce the two of them combined raised over 100,000 Linden dollars for the Relay

Thank you to those volunteers that partied with Harmony of Hope for the past two days. To the clubs that participated, thank you and y'all are awesome. Total lindens = 147,680 which equals almost $600....job well done!

As of the writing of this article, Team Harmony of Hope has gone up to over 351,800. Team Bonanza has raised  over 179,000 Lindens. Team Sunbeamers has gone to over 445,000. With the air show the following weekend, Sapphire level, or 500,000 Lindens, was within sight. Once again, "the little team that could" was being a top performer for the Relay. 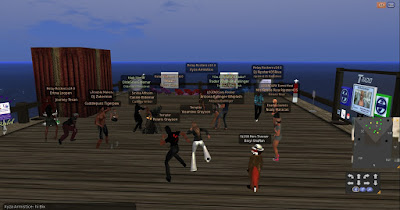 The following day, among the Relay events was one being held by the Relay Rockers at the boardwalk in Arinultra Cay. This was their party for the closing of "Bid Me Bald" vs "Grayson's Challenge" or "Bid Me Mesh." 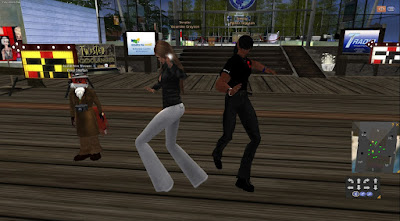 As a couple, Polaris and Yasamine Grayson stand out for the length of time they've been in Second Life, since 2004, and their relationship which apparently has lasted that long as well. The Relay Rockers are known for their "Bid Me Bald" events, with the volunteer getting a haircut at the ending party. This time, they upped things a few notches by making it a "versus" event between the couple. 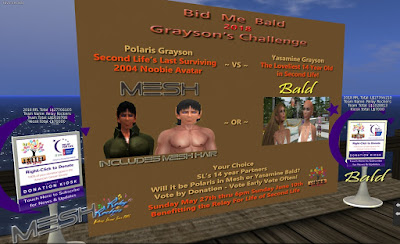 The Relay Rockers gave people a choice of two "Bid Me" events, and two kiosks. Yasamine was in a traditional "Bid Me Bald." But Polaris put his looks on the line, offering to change from "Second Life's last surviving 2004 noobie avatar." Technically, it wasn't a "noob" as it had pointed ears, darker skin, and other small changes. But his friends kept telling him it was way out of date (something yours truly can relate to), so he gave them a chance to put their money where their mouth was by offering to change to a more recent mesh avatar. And they did, with "Bid Me Mesh" outdoing "Bid Me Bald" by 70,000 versus 7,000 Lindens raised. A ten to one ratio. "The last of the old school avatars is about to made history," Vickie Maidstone sobbed in Relay chat. 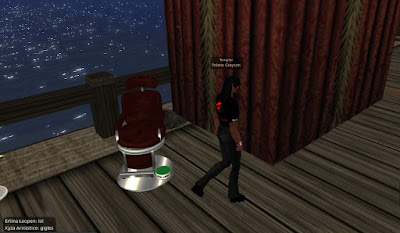 Finally, the totals were made official, and it was time for Polaris to make good on his promise. So he ducked behind a curtain. "This is for Pol,"Trader Whiplash joked, then played "Changes" by David Bowie.

"I am so tempted to peek in (laughter)," one lady joked. "No peeking ," Trader spoke, then laughed. 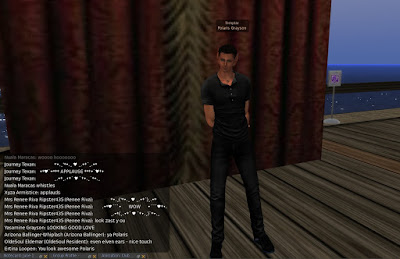 And after a couple minutes, Polaris emerged in his new mesh look, to the applause of many in the crowd, "Wow Pol  you look good!" "You look awesome Polaris." "Mesh, but still you." "Even elven ears," Oldesoul noticed, "nice touch." Polaris chuckled, "Hee hee. It took a week to work this avie out heh heh." Trader would sent a picture to the Relay group, "Ladies and gentlemen  the new 2018 Polaris Grayson."

A few days later, there would be another milestone set for this year's Relay, crossing the 30 million Linden dollars total raised. But there are still many events left this season. For instance, the Sunbeamers have their air show on June 16. And there is talk of a joint event with another team. And of course there is the Relay Weekend next month, which always brings much anticipation and some great builds.

Addition: I'd hope to get this up on Wednesday, but yours truly has been quite busy in both real life and getting the Newser exhibit for the SL15B ready. Better delayed than never.
Posted by Bixyl Shuftan at 1:00 PM