Scenes From The Sunbeamer Air Show 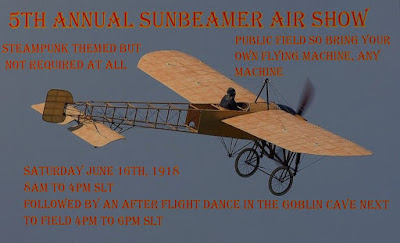 On Saturday June 16, Farshore Field in the Sunlight Bay sim was the setting of a key event for the Sunbeamer Relay for Life team. It was the day of the "Fifth Annual Farshore Field Steampunk Air Show Fly-In." 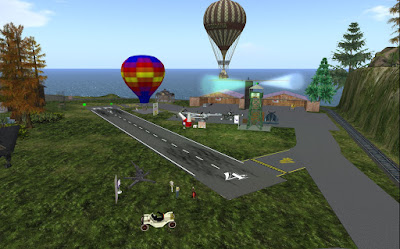 The event started at 8AM, and lasted until 4PM, with activities taking place all day. 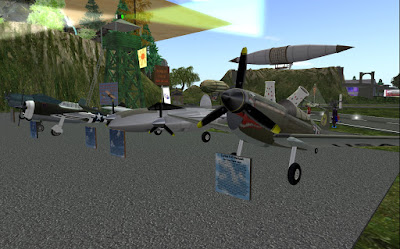 Cynthia Farshore, the owner of Farshore Field, had a number of replicas of WW2 aircraft on display. 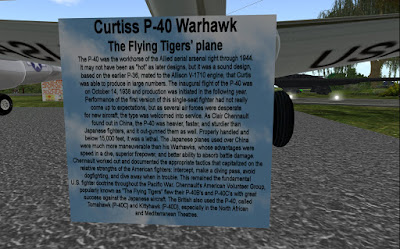 There was some information on each of the planes. 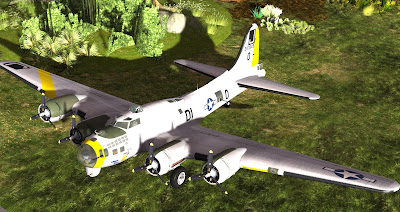 The Superfortress heavy bomber would continue to serve long after the war, not being taken completely out of service until the 1960s (photo by Wildstar Beaumont). 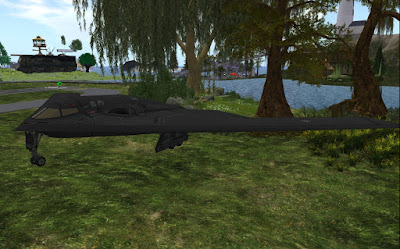 Not all of the planes were from the Second World War. There were others such as this B-2 bomber, made for a different kind of fighting. While the bombers of WW2 weren't cheap, the stealth technology made this plane cost about three times as much as a B-1. 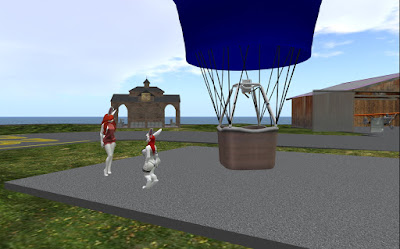 Skylark "Snowy" LeFavre was offering balloon rides. She would later tell me she raised several hundred Lindens for the team this way. 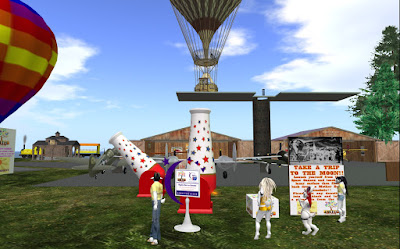 Another attraction was the "Take a Trip to The Moon" cannon. The idea was the cannon would shoot you up to a platform resembling the lunar surface. But one could easily bounce off of it and come back down. 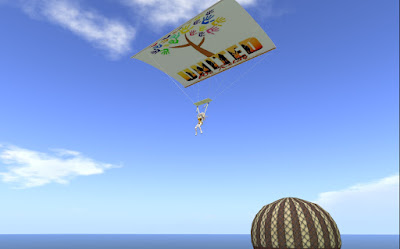 It was highly recommended that you grab a parachute before going up, one provided free of charge (guaranteed your money back if it failed to work). 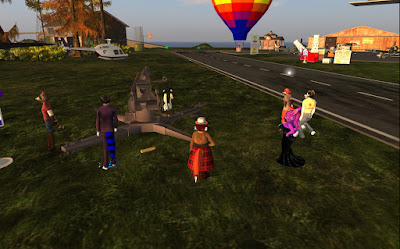 There was also the water dunking, where someone would fire a German 88 at a target on a dunk tank to try and knock off the vic-er, volunteer. 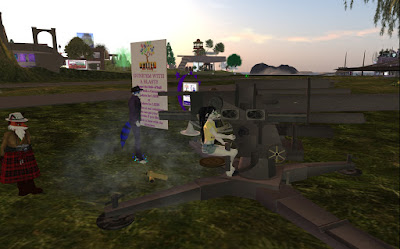 To make it more of a challenge, you couldn't go into mouselook while on it. So aiming it was tricky. 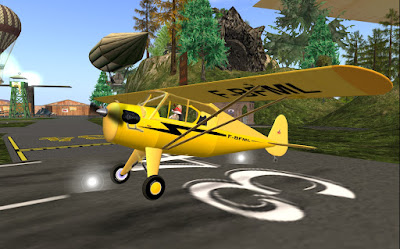 And being an air show, people could take off planes from the airfield. 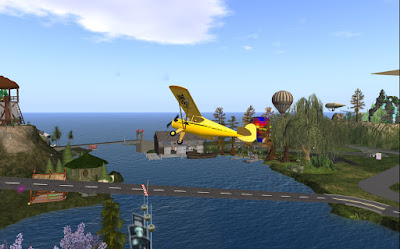 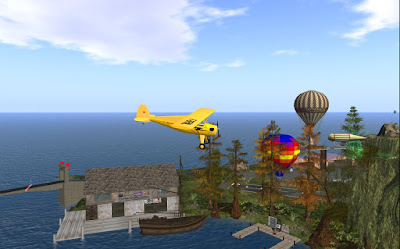 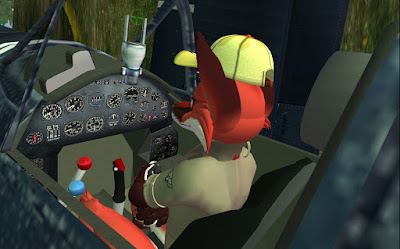 Cynthia Farshore, whom was looking foxy after the results of the "Bid Me" event she was in, tries her hand at a Corsair. 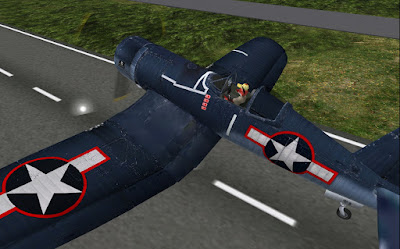 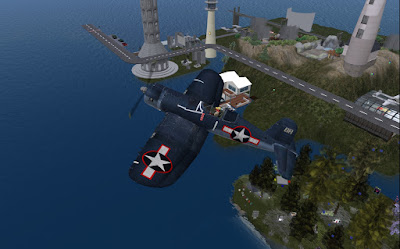 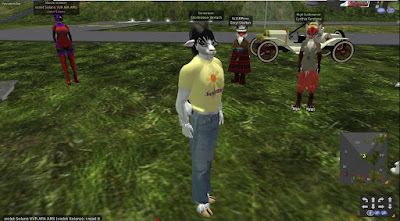 Shockwave Yareach, whom looked like someone had "gotten his goat" thanks to the "Bid Me" that ran next to Cynthia's. 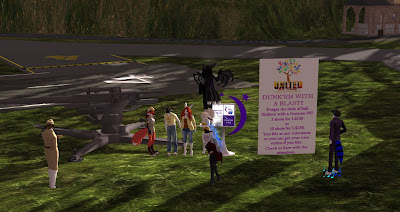 Real-life called me away at one point, and I was gone for a while, missing part of the action, such as when Wildstar Beaumont appeared. 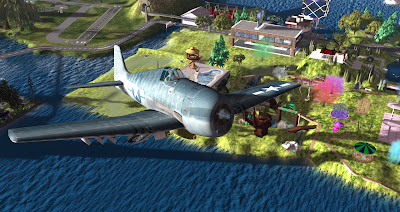 More pictures by Wildstar can be seen on his Flickr page (here). 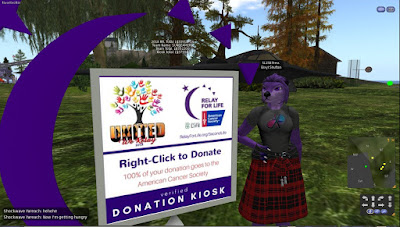 I arrived to some big news. Team Sunbeamers had finally hit 500,000 Lindens raised, which this year was Sapphire rank. I had promised to go purple for a week (under most circumstances), and so I did. 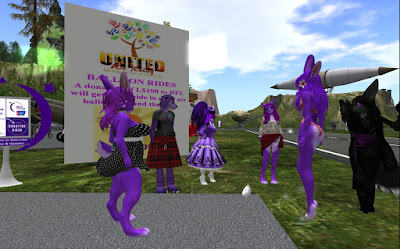 I wasn't the only one who went purple, though. 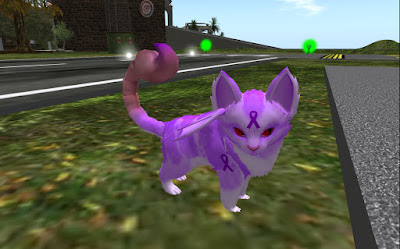 Among those there was Astra Noctura (Silverskyranch, the maker of the "RFL Rabbit V2." which Deaflegacy wrote about. 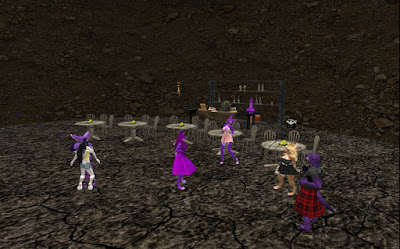 Following the air show, from 4-6PM there was a party in the Goblin Cave, inside the hill near the airport.

Once again, the Sunbeamer's air show was a big success. "The little team that could" had done so once again, thanks to the efforts of Cynthia Farshore.