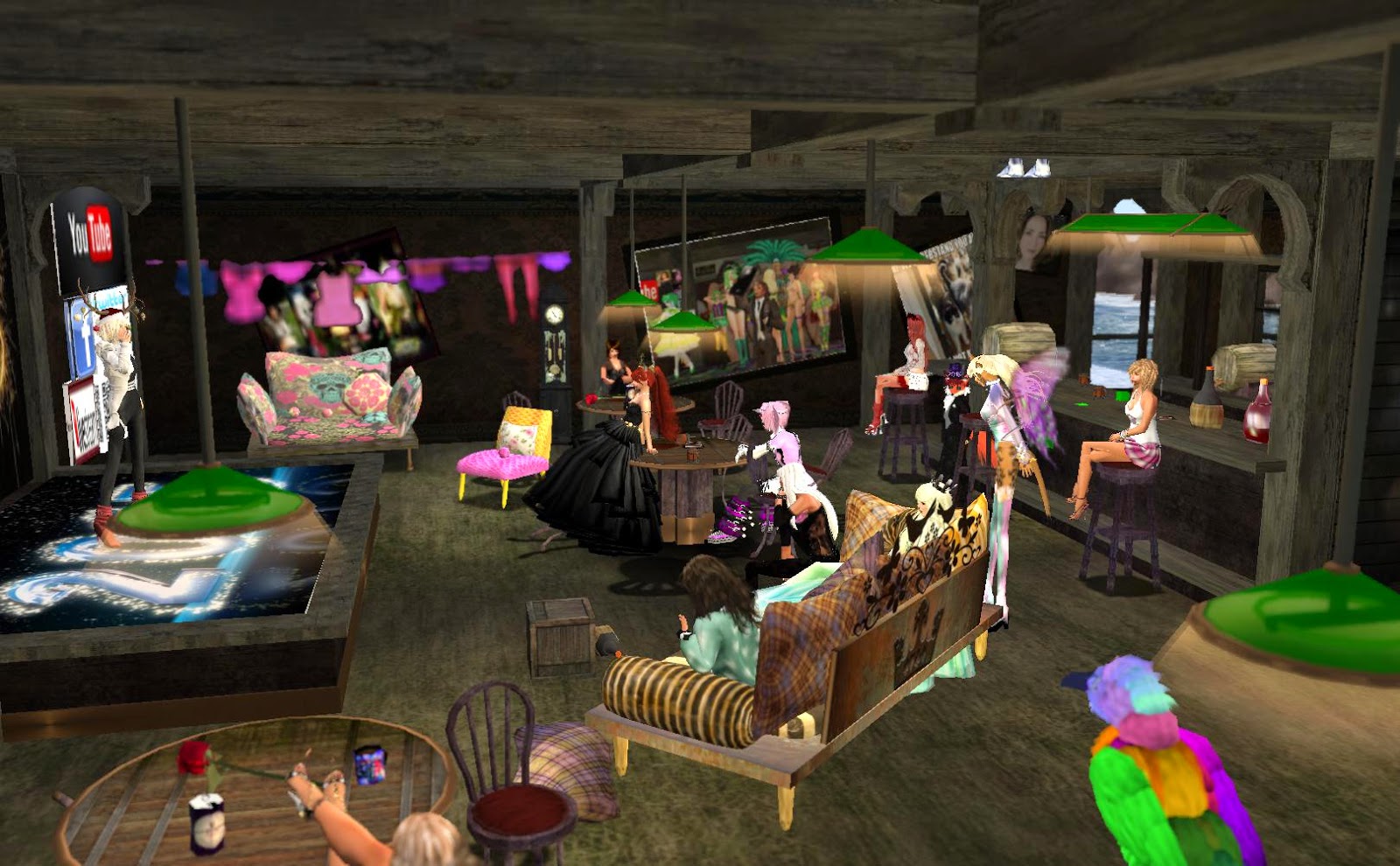 As the end of 2014 approached, various places in Second Life would mark and celebrate the event in various ways. Lauren Live, the weekly stand-up comedy show at 5PM SL time on Tuesday Dec 30 had their event in a New Years theme, cracking jokes about various events, in both SL and real life. 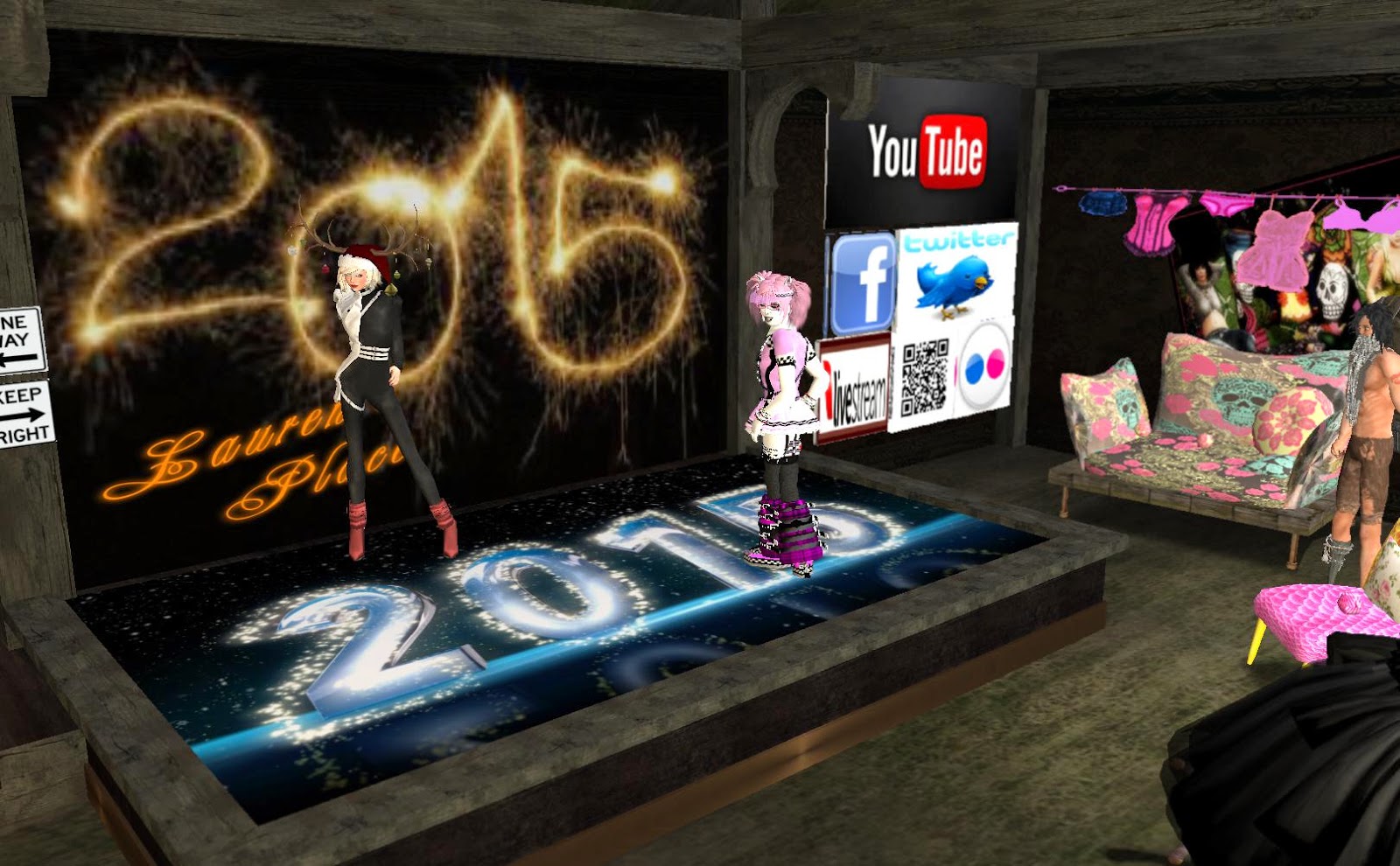 After a while, Lauren offered the stage to anyone else with a few wisecracks. Catboy Qunhua took up the challenge and got up on stage for a few moments. 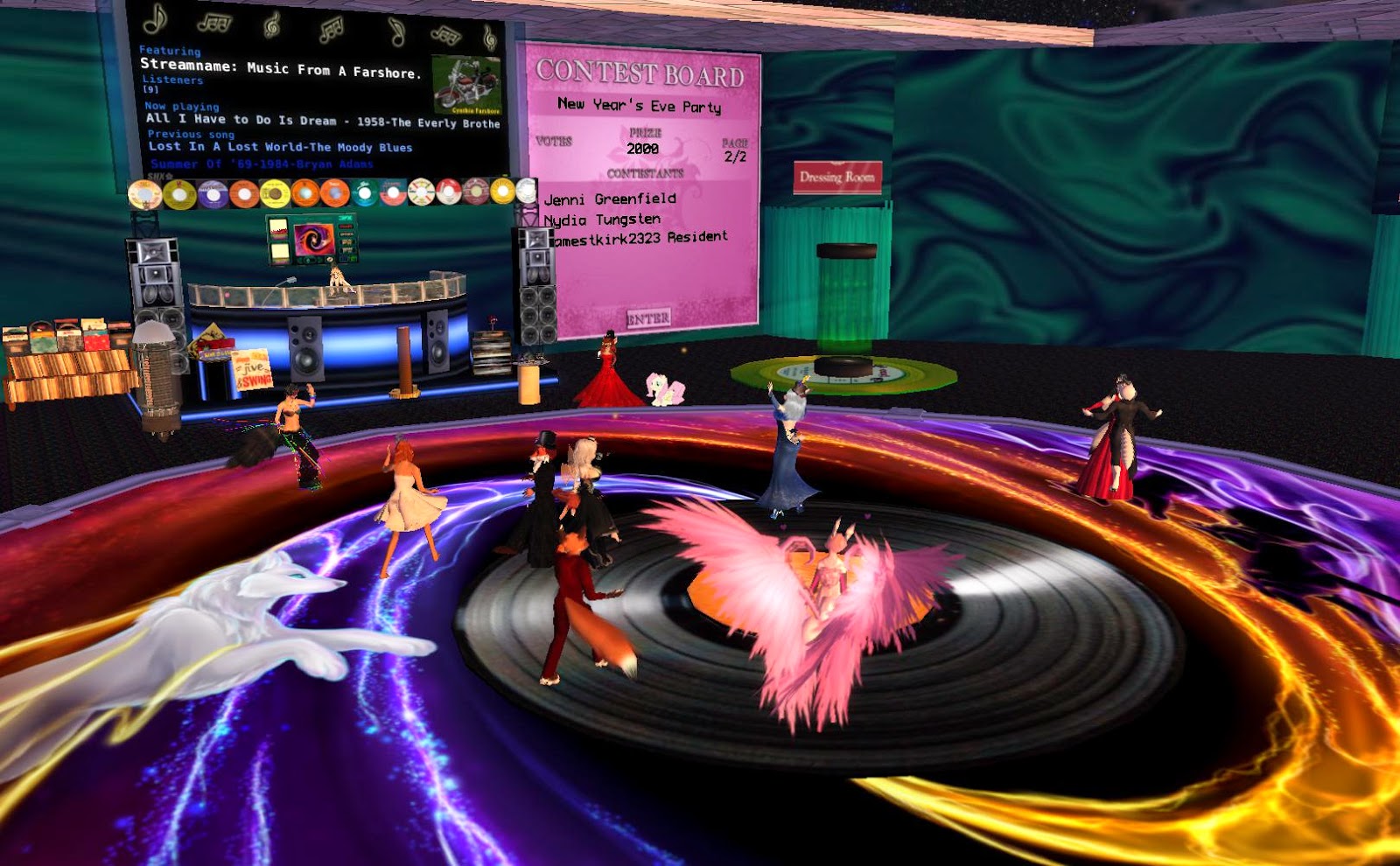 Later that night at 6PM SL time, The Vinyl would hold it's "New Years Eve Eve" event. The DJ planned for the event was unable to come, so Cynthia Farshore stepped in. The prize was a whopping 2000L on both the mens' and women's boards, most of each donated by a generous friend of the club. 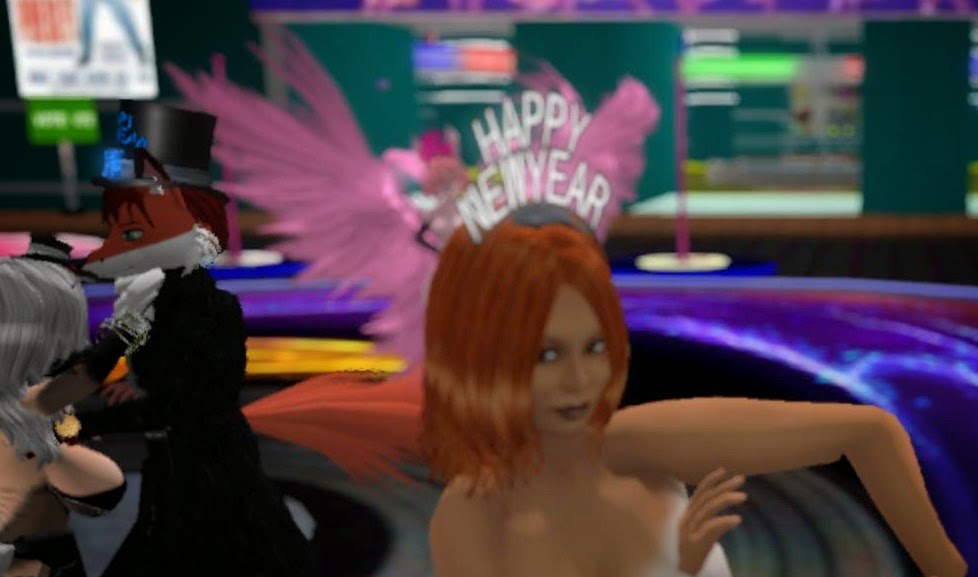 Tonight at the Vinyl, it's our "New Years Eve" Eve Party. We say goodbye to 2014 with a series of rockin' tunes. Come dressed formally, in something that you think represents the year, or just come as you are. However you come over, be sure to come for a great time.

The event was won by Lewis Oanomochi, and Jenni Greenfield. 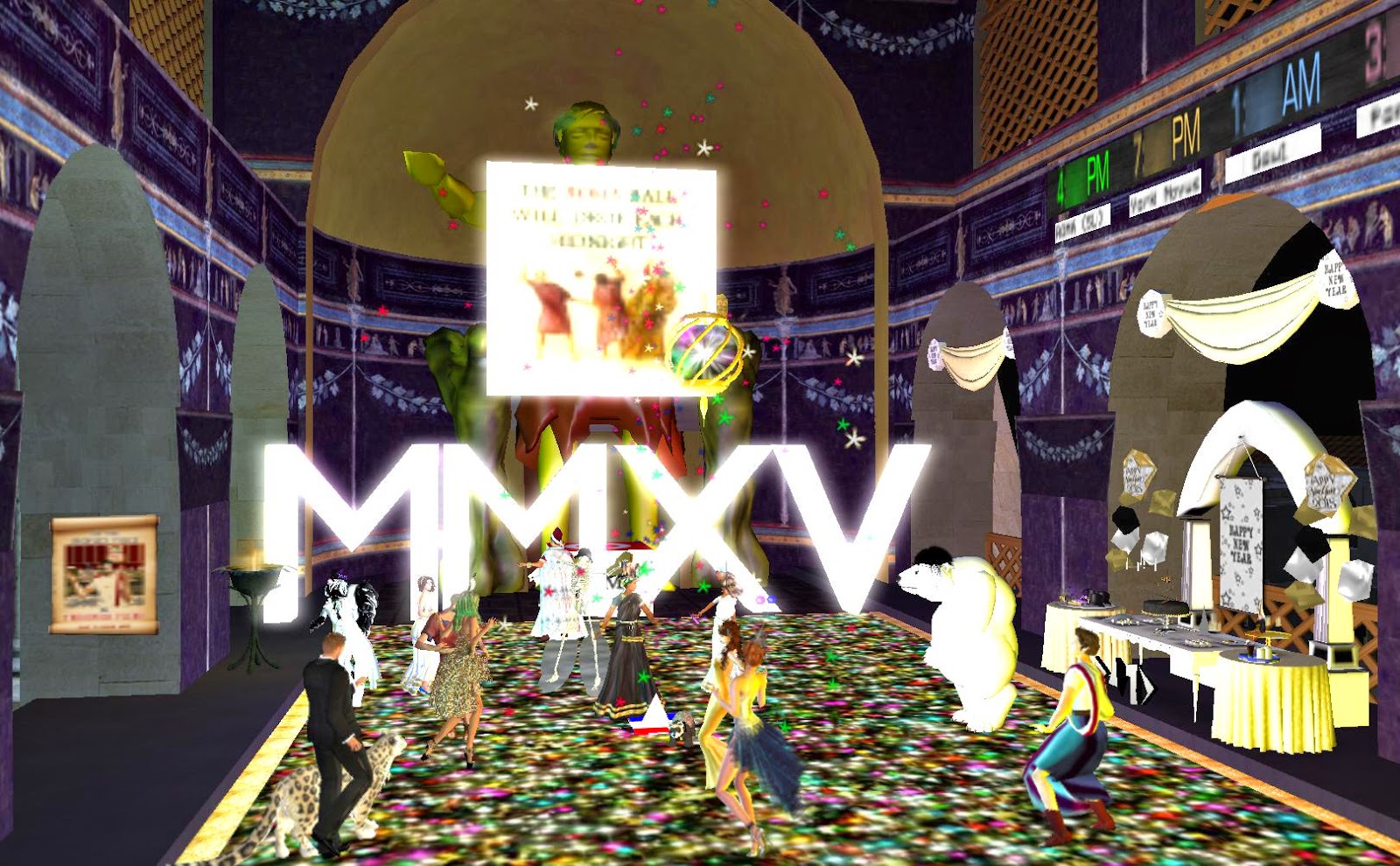 On New Years Eve, Dec 31st, one place would hold two events that day. In the Roma sim, they would celebrate as the New Year came to various time zones across Europe.

As always, ROMA will be celebrating the new year across European and American time zones!  The party starts at 2pm SL time as we celebrate the new year with dancing and fireworks at 3 and 4,  and then resume at 8pm for fireworks at 9, 10, 11, and 12.  Come join us at the ROMA basilica!

Every hour, a ball there would drop, and when reaching the ground lights and fireworks go off. To the side were a few goodies to sample. After the last time zone in the Old World hit 2015, they took a break for a few hours, then began partying once again when it was the Americas' turn to celebrate. 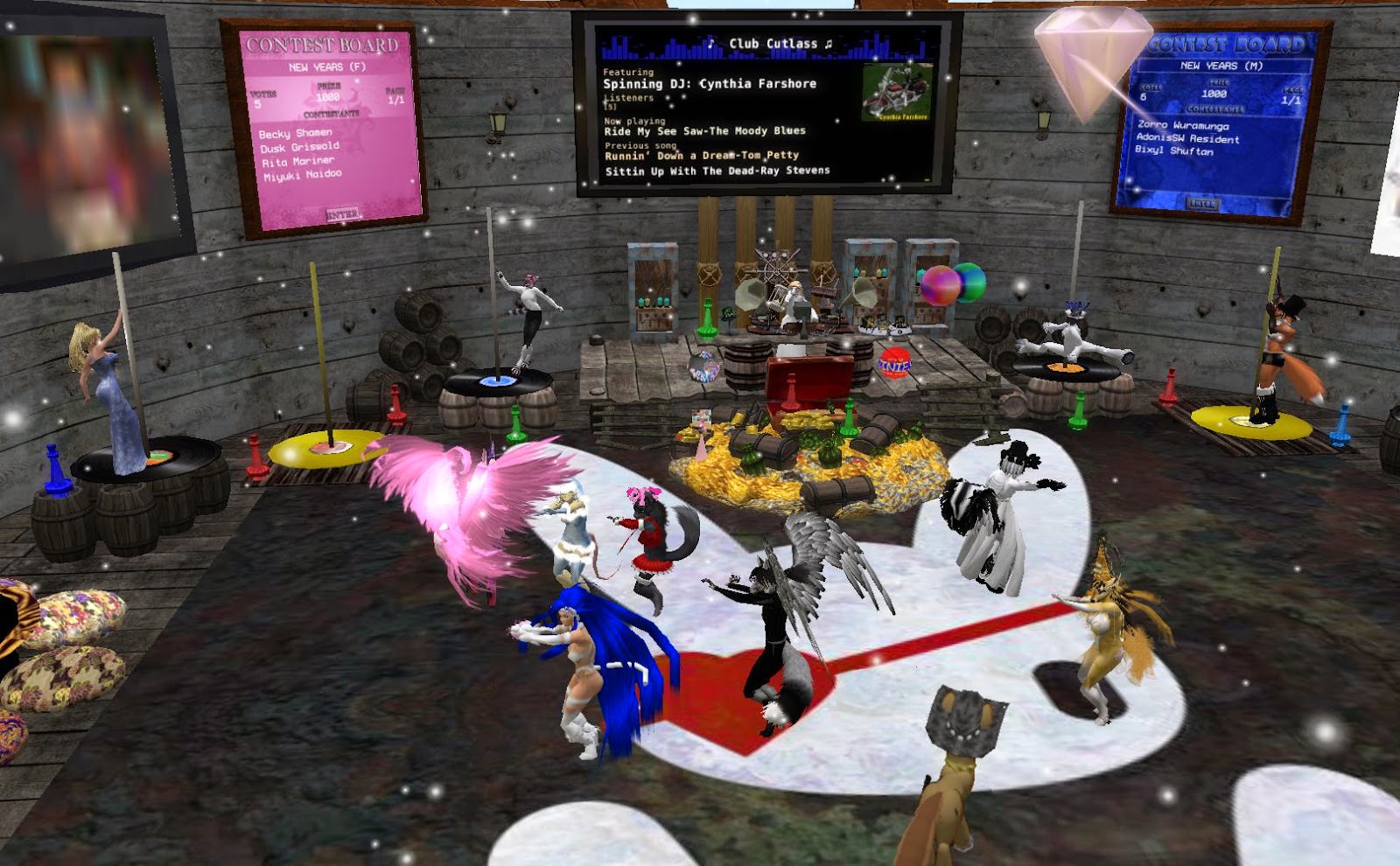 At 6PM SL time, Club Cutlass would began it's New Years Eve Party. Like the Vinyl, they had a larger than normal prize, starting at 1000L on each board.

It's been a long 2014, and time to begin a new year. Come out at 6 PM for an extended party with music by DJ Cynthia. The contest will run the usual 2 hours, but the party continues well into the next year, so dress up for the big party, grab your party horns and other noisemakers along with your 2015 hats, and come celebrate. 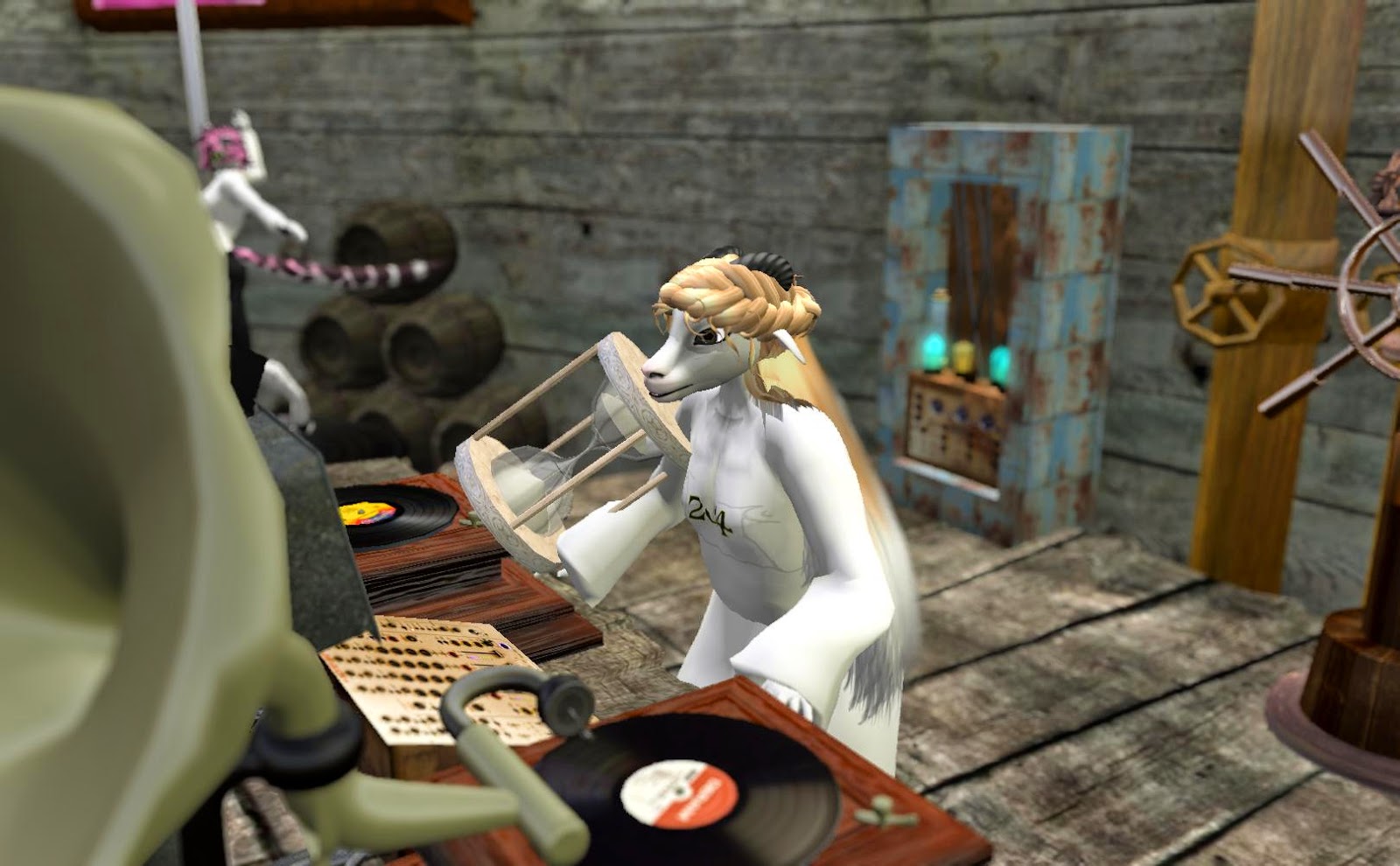 DJ Cynthia spun the tunes for the party, appearing in a robe with an hourglass with the number 2014, representing the old year. This would not be a normal music session for her, but a marathon lasting more than six hours. This would be the third time she had done so in Second Life. 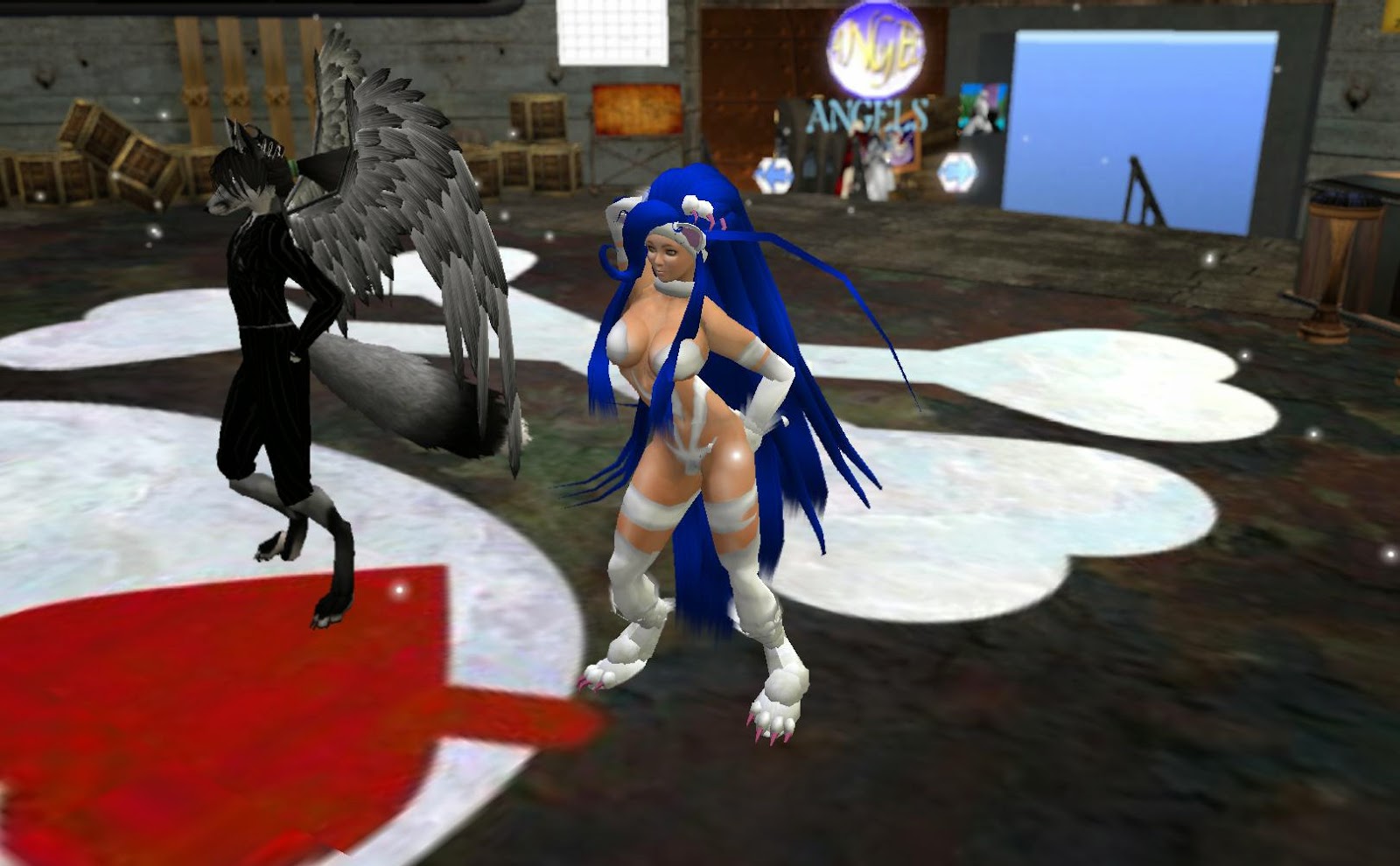 There was some confusion as to the theme of the costume that night. Was it formal, first avatars one had as newcomers, or just something special for the occasion. Miyuki Naidoo decided on the later with her Felicia. 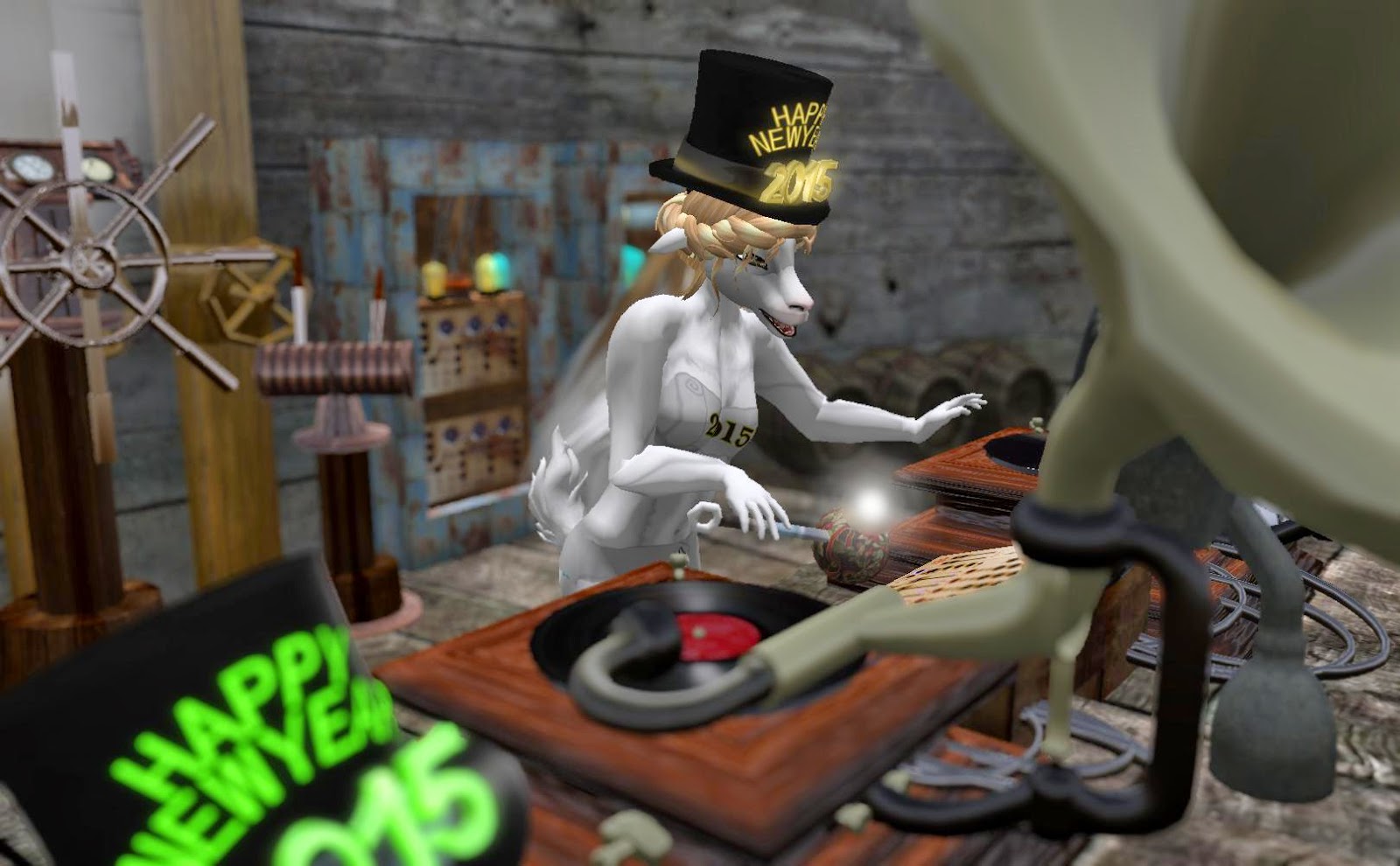 The contest, boosted to 1500 for each board, would be won later by Dusk Griswold for the girls, and yours truly Bixyl Shuftan for the guys (don't worry, I gave the DJ a generous tip). At 9PM SL time, or Midnight on the US East Coast, Cynthia changed out of the robe for a smaller two piece cloth outfit, with the top having the number 2015, with a rattle, representing the new year.

Cynthia would play for a little past Midnight, ending the event with "Old Scottish Waltz" and the New Year's classic "Auld Lang Syne," both by Andy Stewart, "Happy New Year's to all." 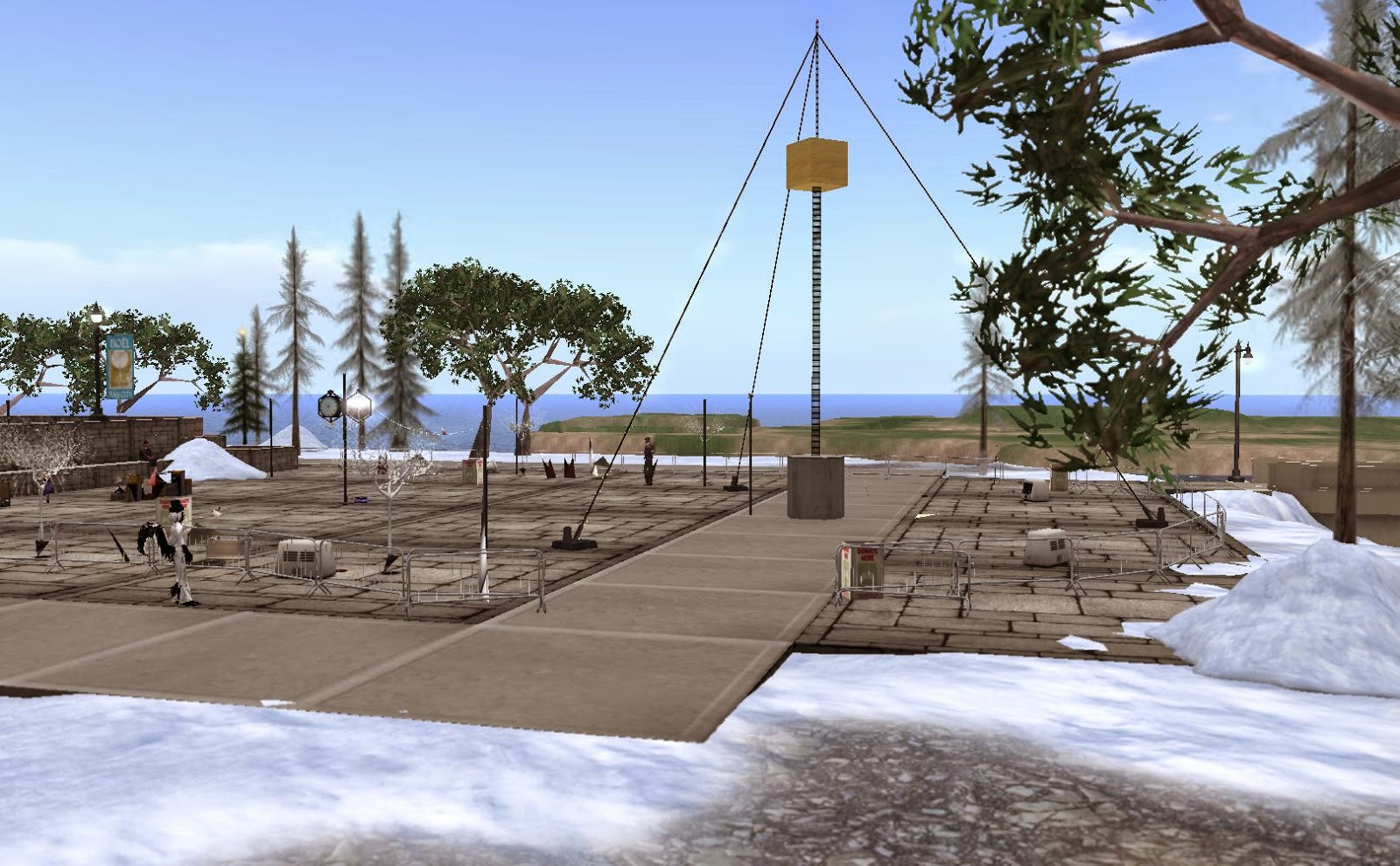 At Bay City, they would celebrate with their version of the ball drop: the Prim Drop. Here's the tower a few hours before the event. 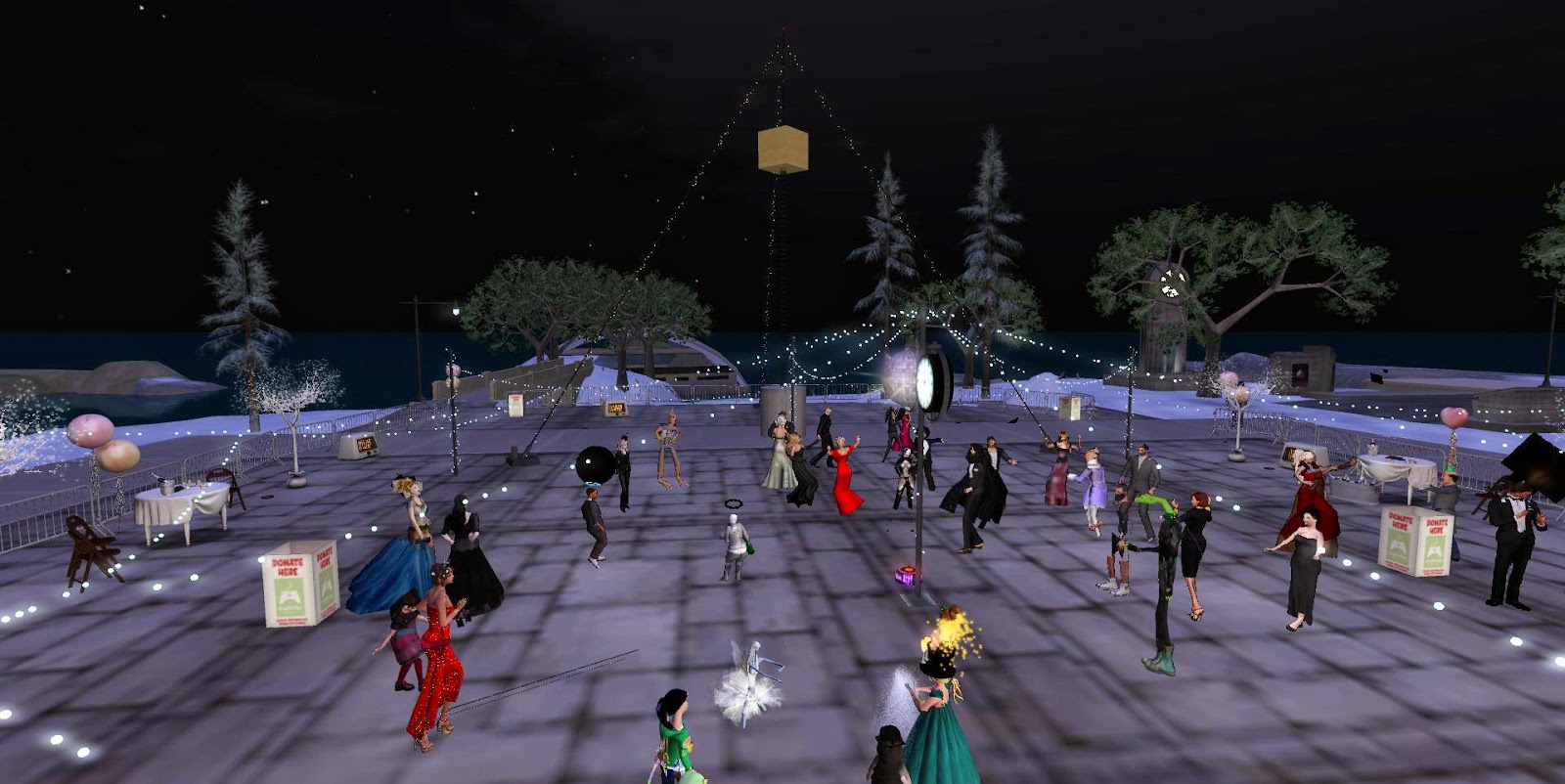 Second Life Newser was not able to attend the actual event itself, but Marianne McCann sent a couple pictures. As the minutes to Midnight SL time ticked, the crowd there waited in anticipation. 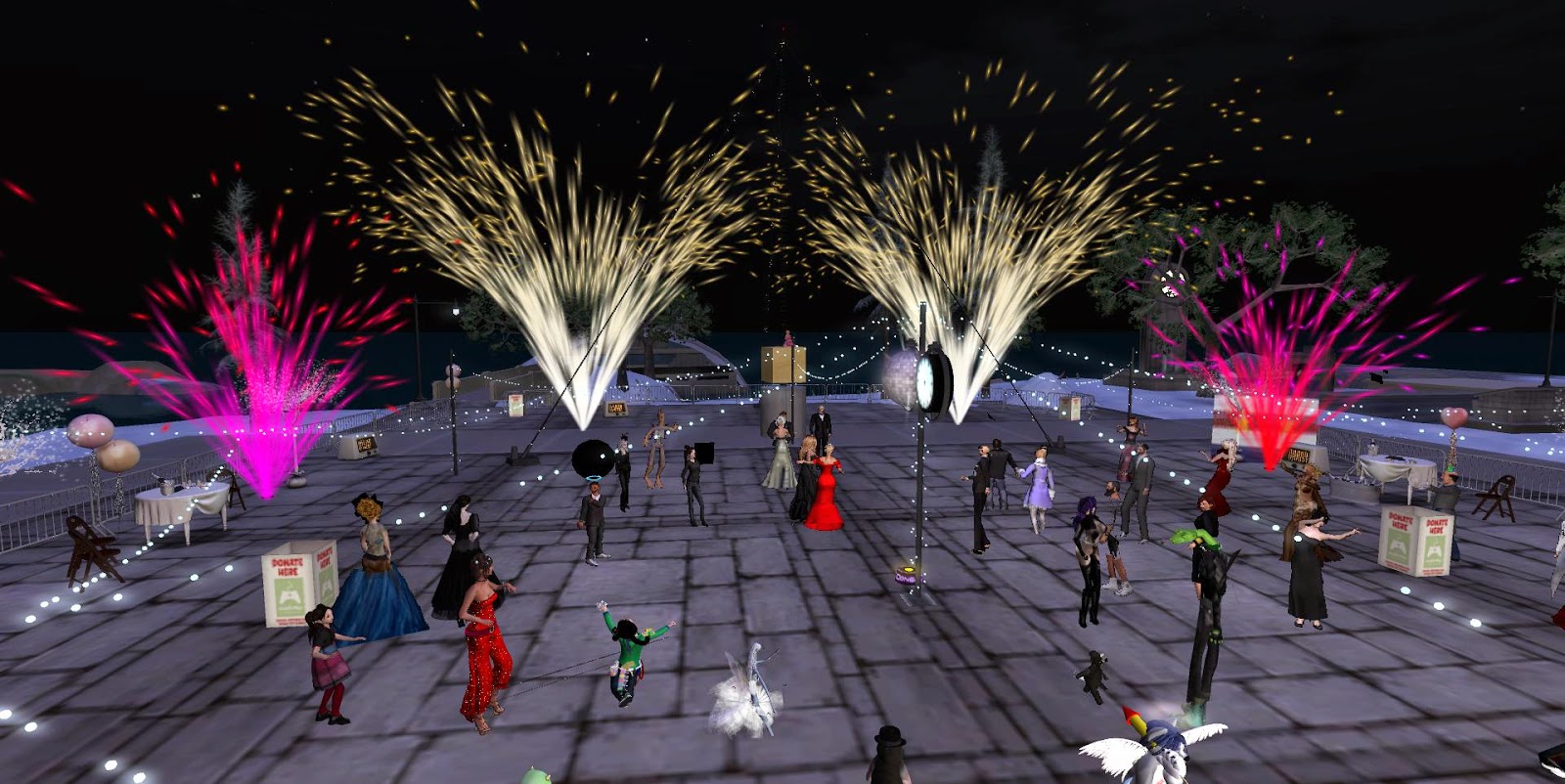 And at 12 Midnight SL time, fireworks were launched as the New Year officially was rung in on the Grid.