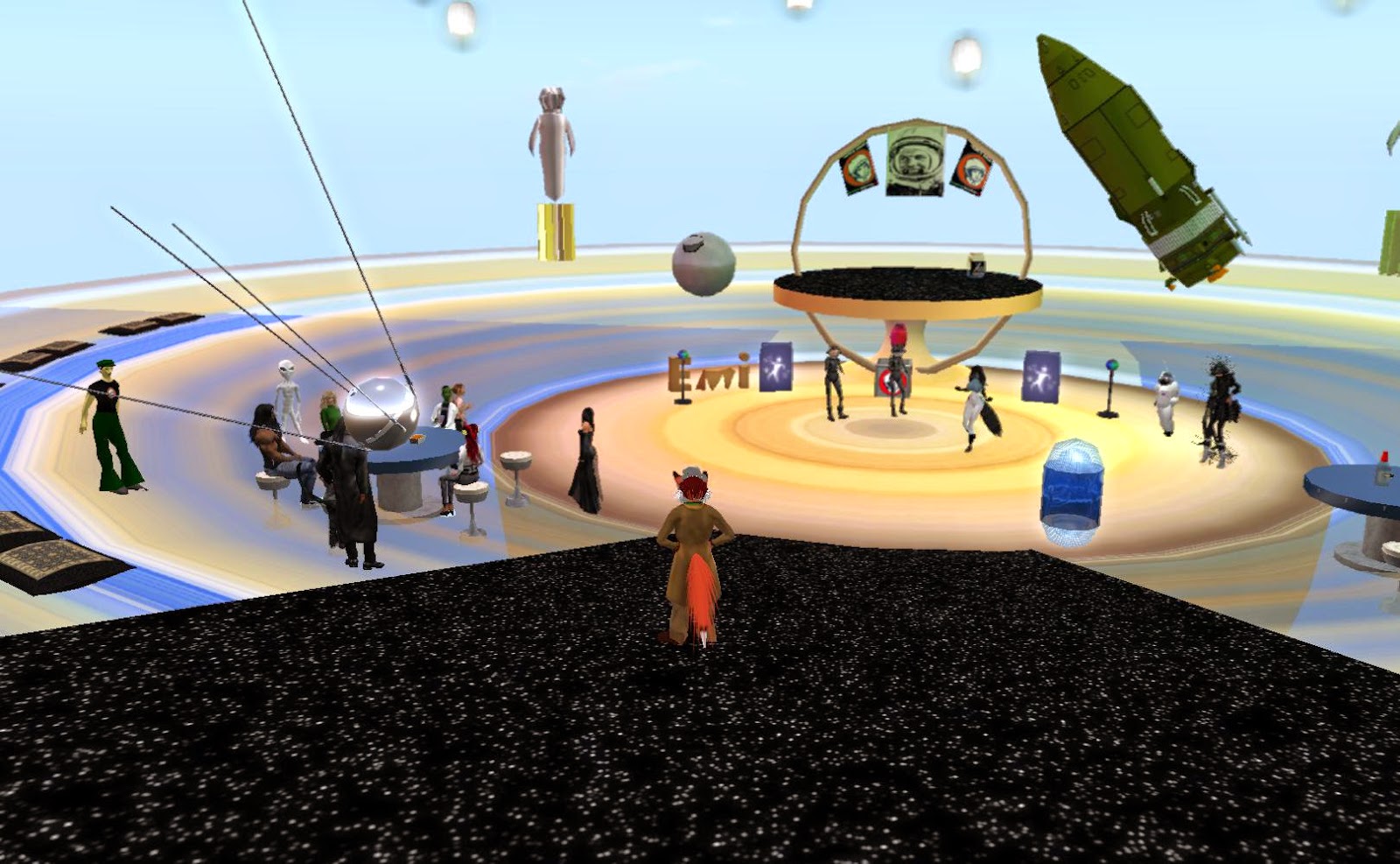 On Sunday April 12, the "Yuri's Night" celebration took place in the Sci-Lands in Second Life. To begin with, Yuri's Night is not an event specific to the Grid, but a worldwide event among space enthusiasts that began in 2001 as a celebration of manned space flight, held on both the anniversary of the first manned flight in space by Yuri Gagarin in 1961, and the date of the first flight of the space shuttle exactly 20 years later. 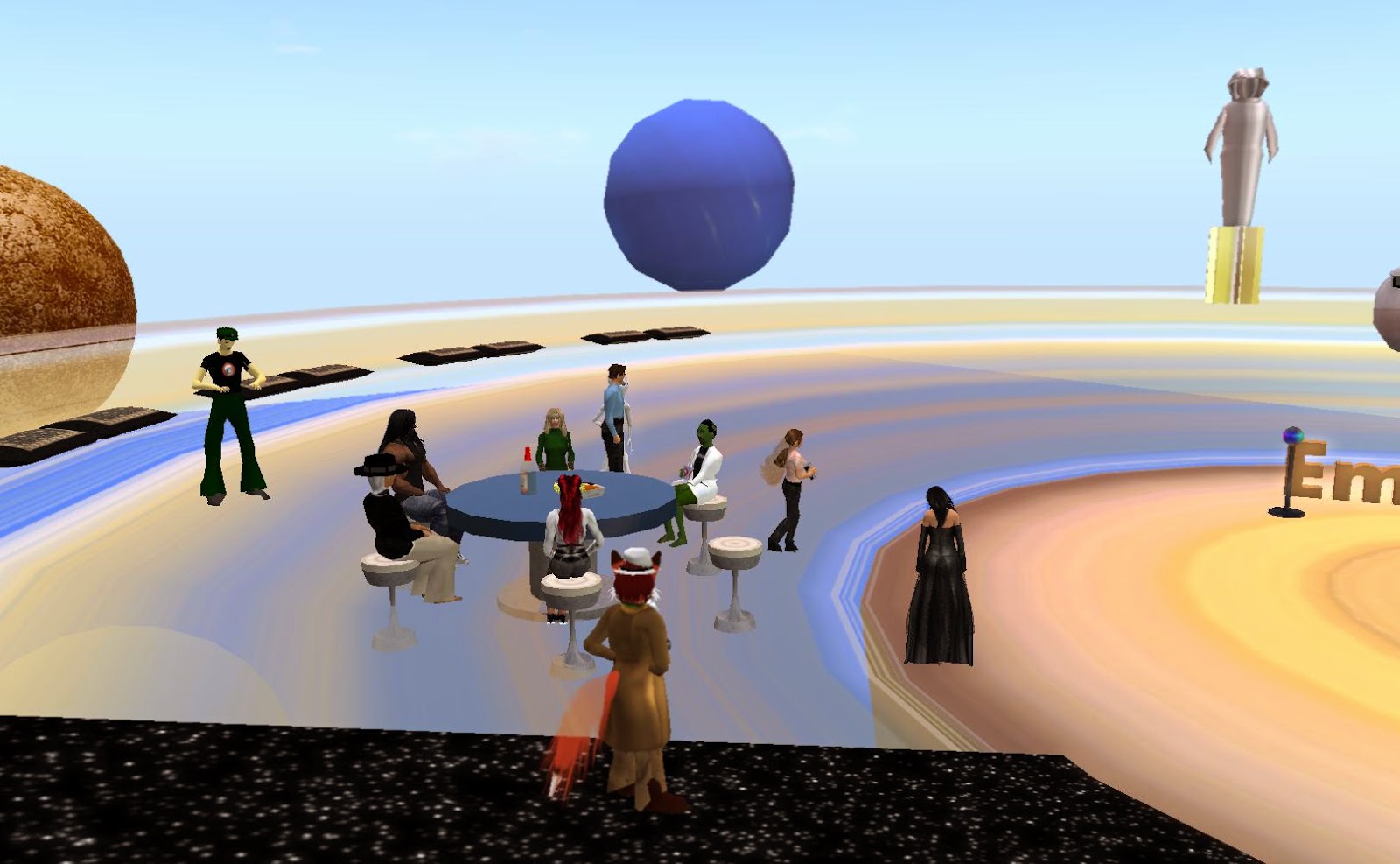 The event's website states, "Yuri’s Night is a global celebration of humanity’s past, present, and future in space. Yuri’s Night parties and events are held around the world every April ... Yuri’s Night events combine space-themed partying with education and outreach. These events can range from an all-night mix of techno and technology at a NASA Center, to a movie showing and stargazing at your local college, to a gathering of friends at a bar or barbecue." The 2011 celebrations were described as being attended by over 100,000 people in over 500 events, including the one then in Second Life then. 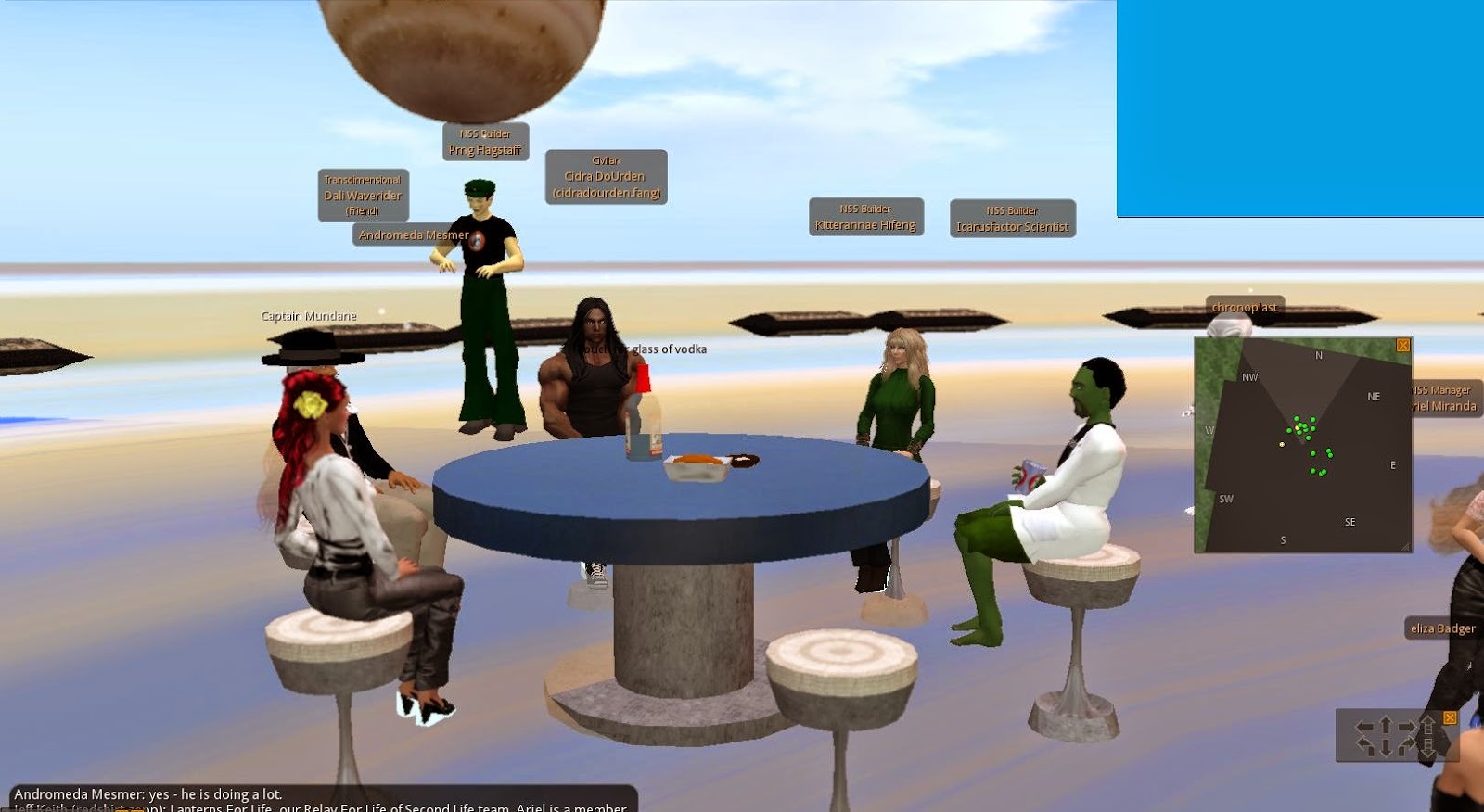 The event was sponsored by the National Space Society's Second Life chapter and the International Space Museum. From Noon SL time to about 4PM, the celebrations took place high above the Spaceport Bravo sim. Cypress Rosewood performed music from about 1 to 2 PM. After that, Emileigh Stanbrook DJed the music. 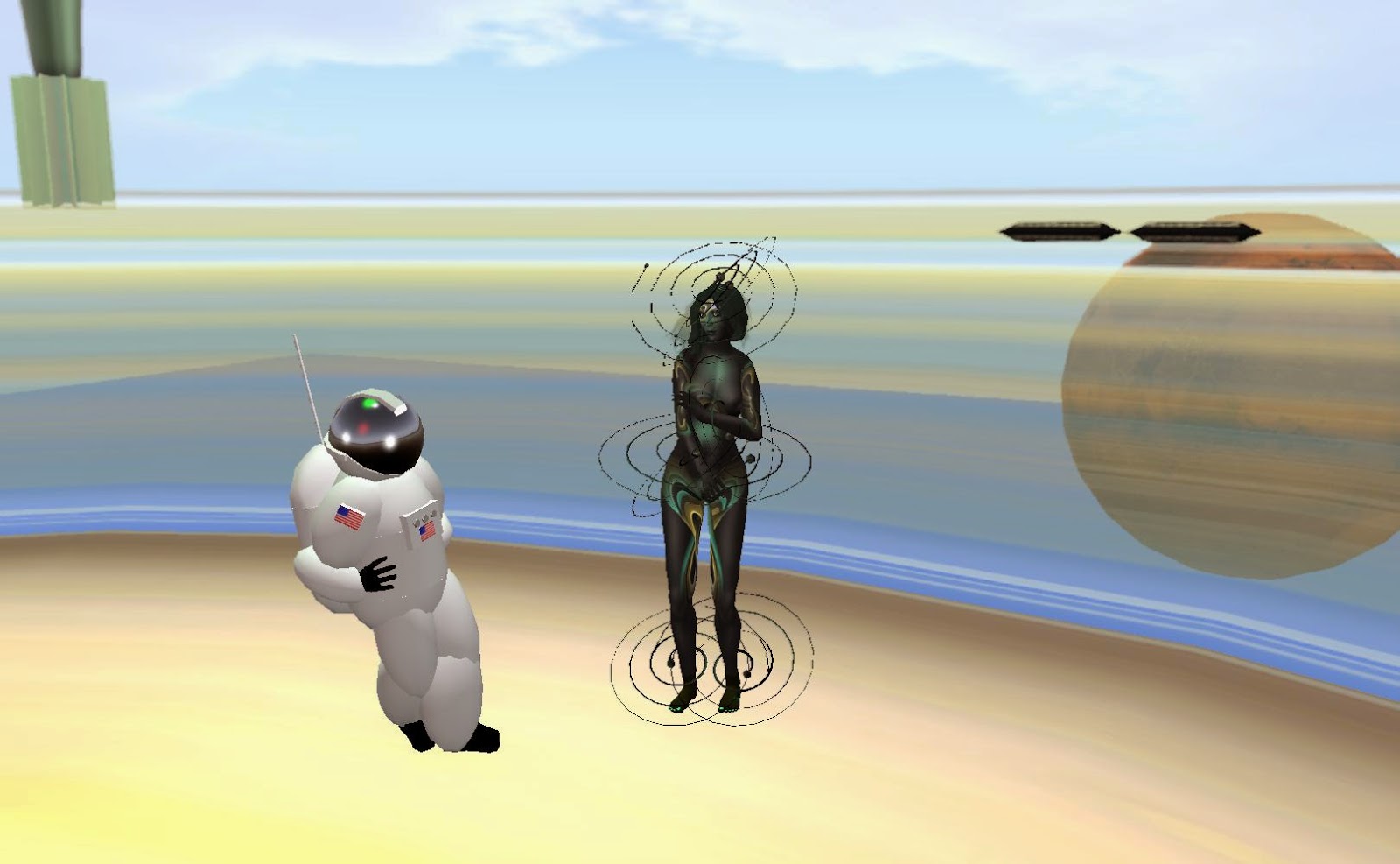 There was a variety of avatars, often with space themes such as spacesuits. 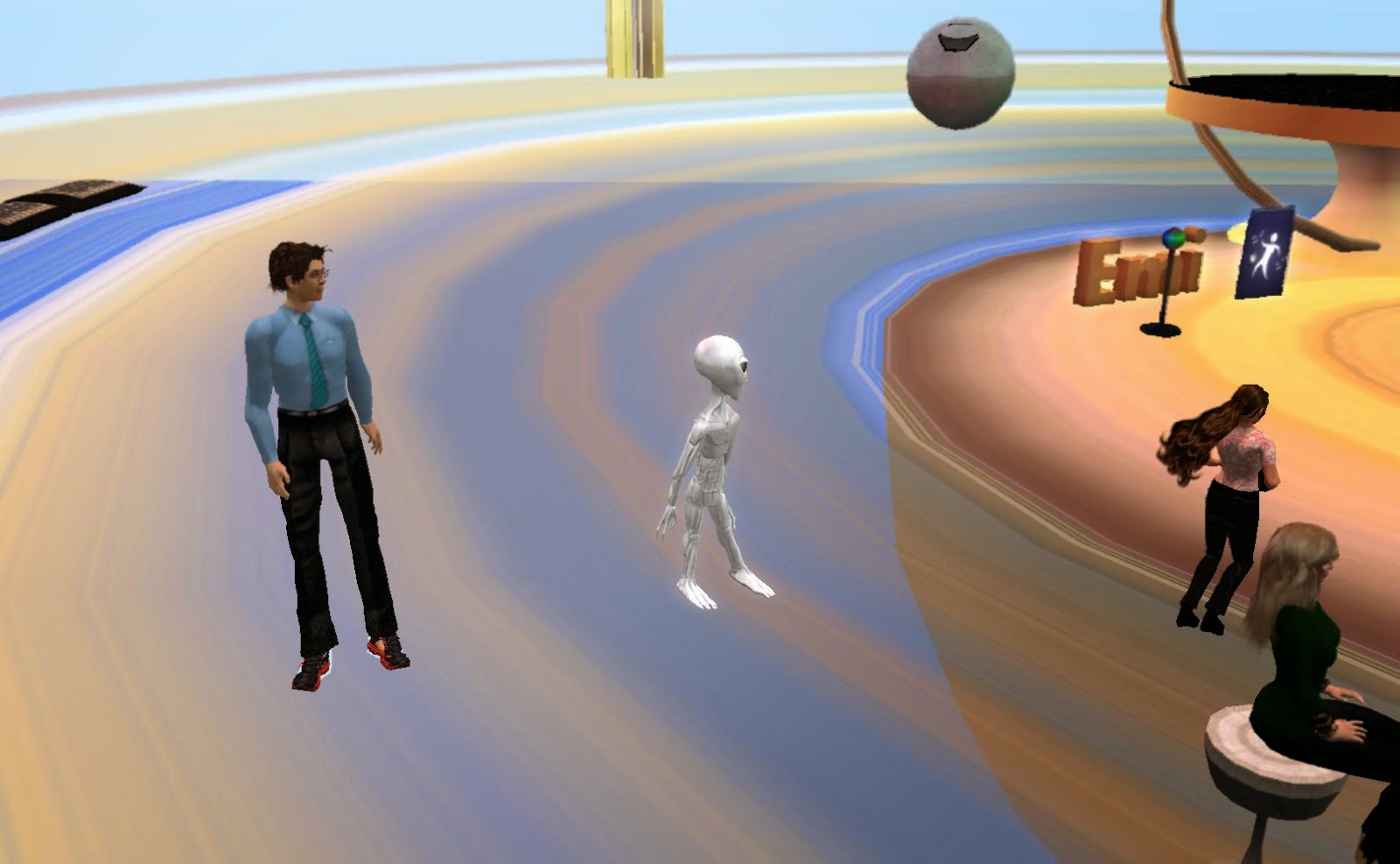 And of course, aliens. 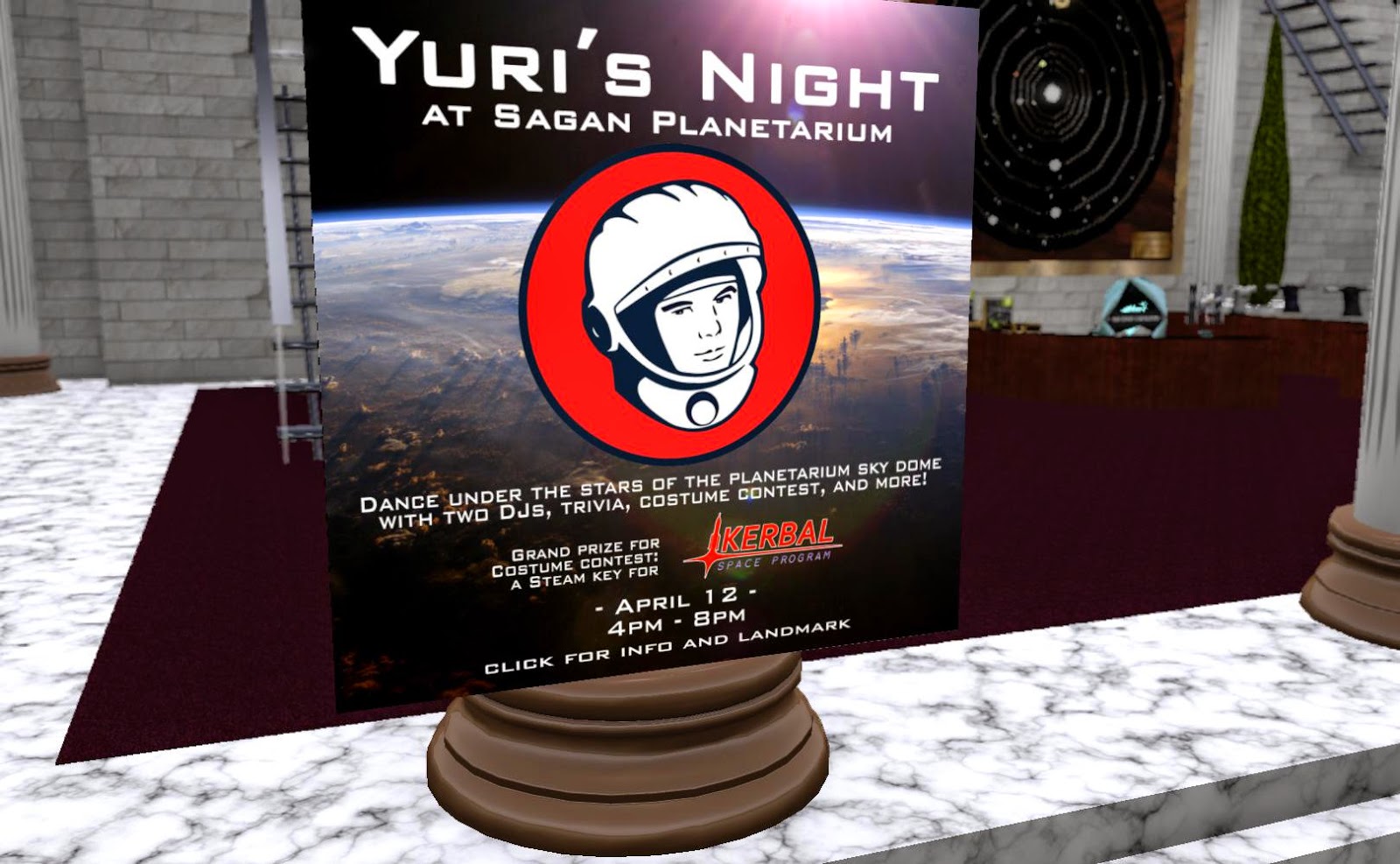 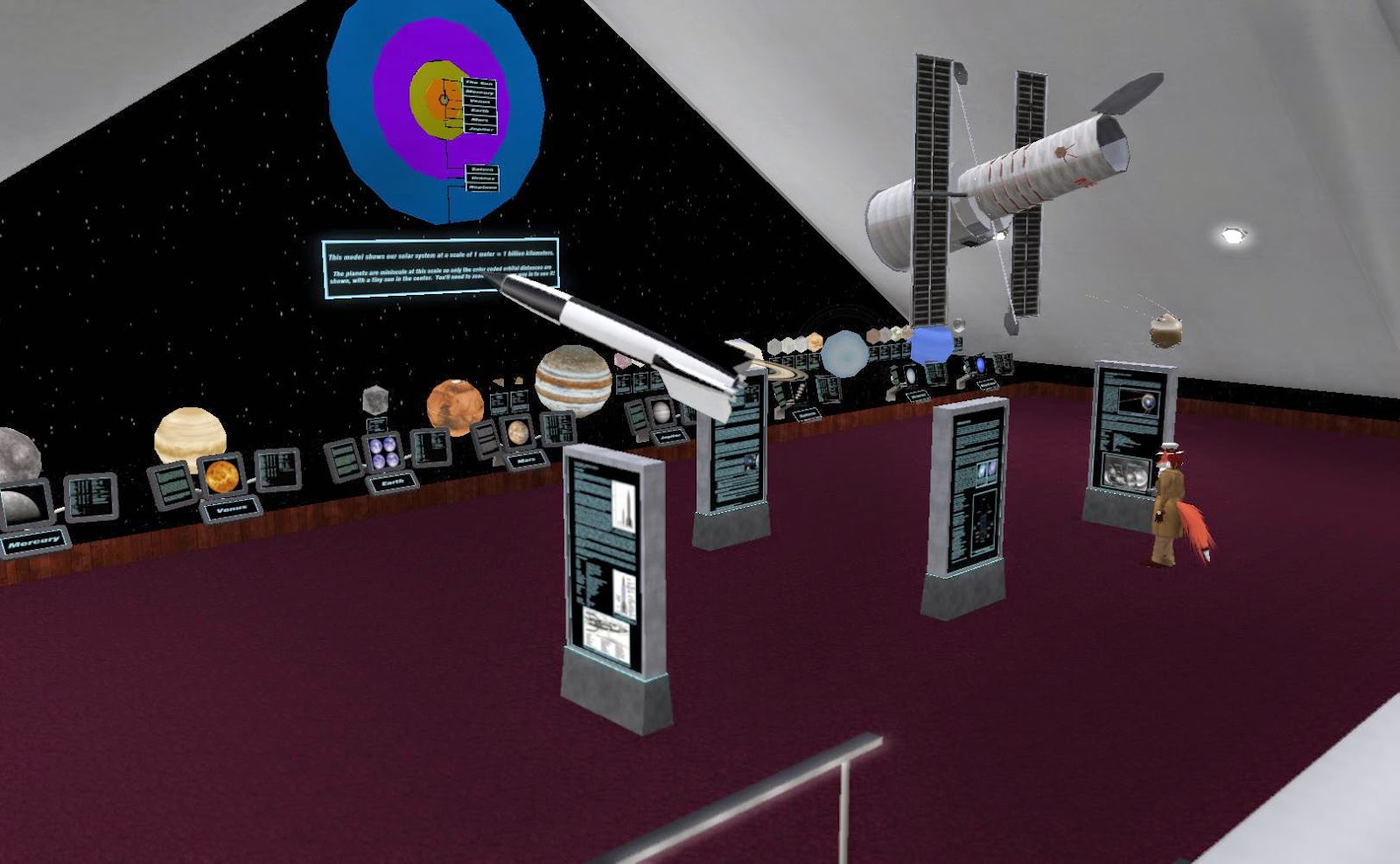 The place had a number of exhibits where one can fill up on space knowledge. But today, the action was in the star and planet display room. 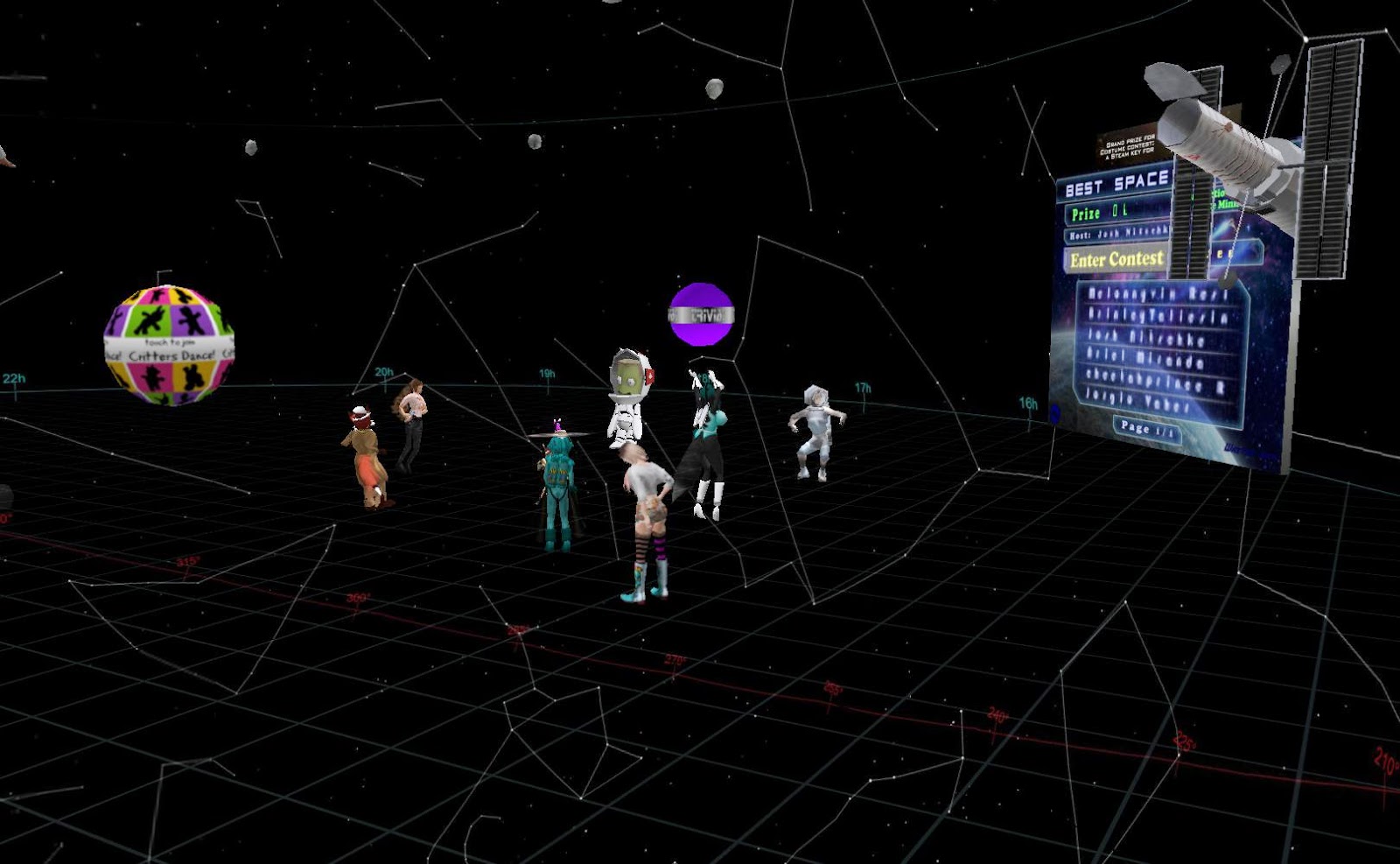 The place took advantage of what Second Life could offer, showing stars, constelations, and planets all around, not just the ceiling. And yes, there were moons, "We're getting mooned here." 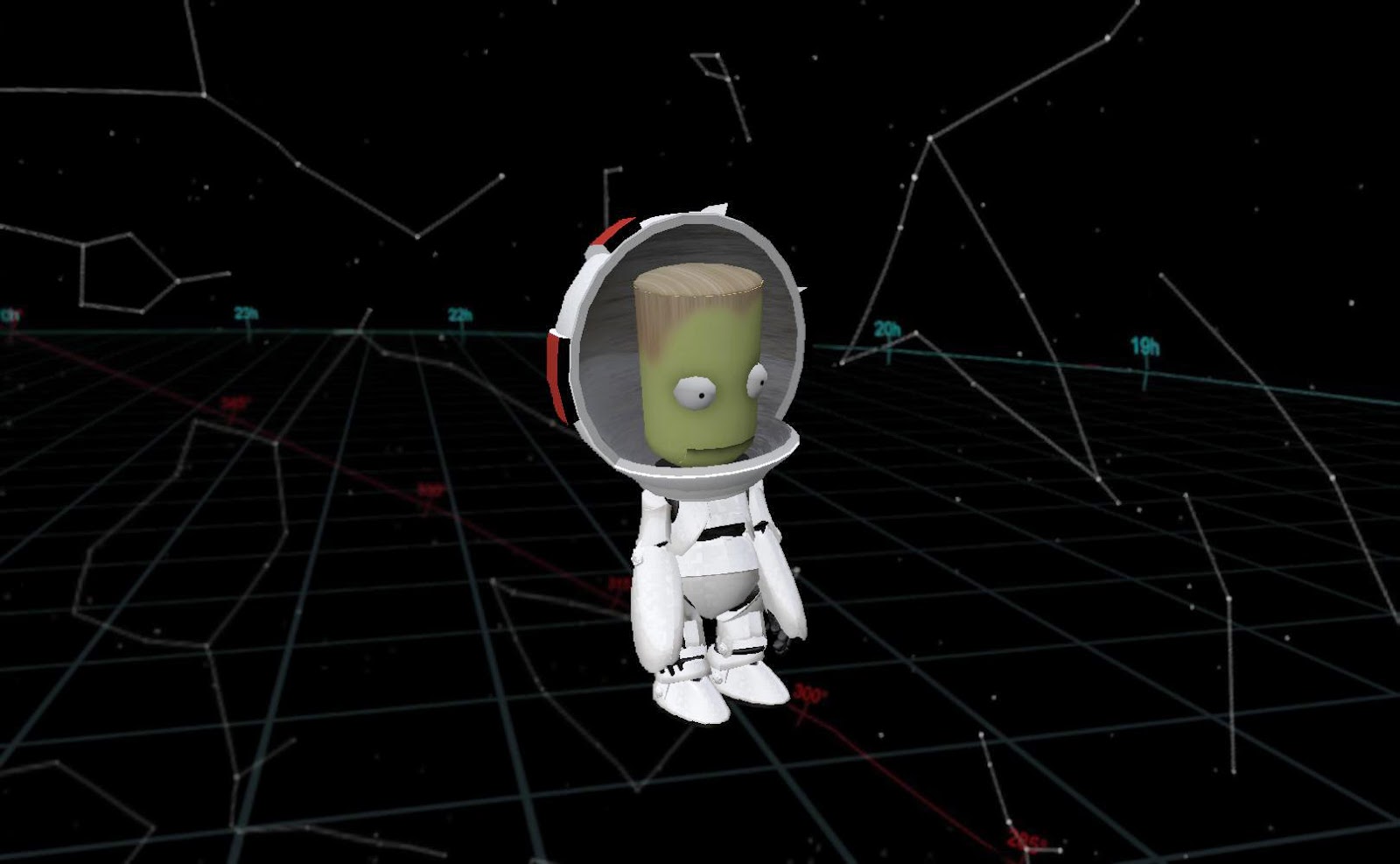 There was a costume contest, with the first prize being a free Kerbal Space Program game from Steam. One guy showed up in a Kerbal astronaut avatar. 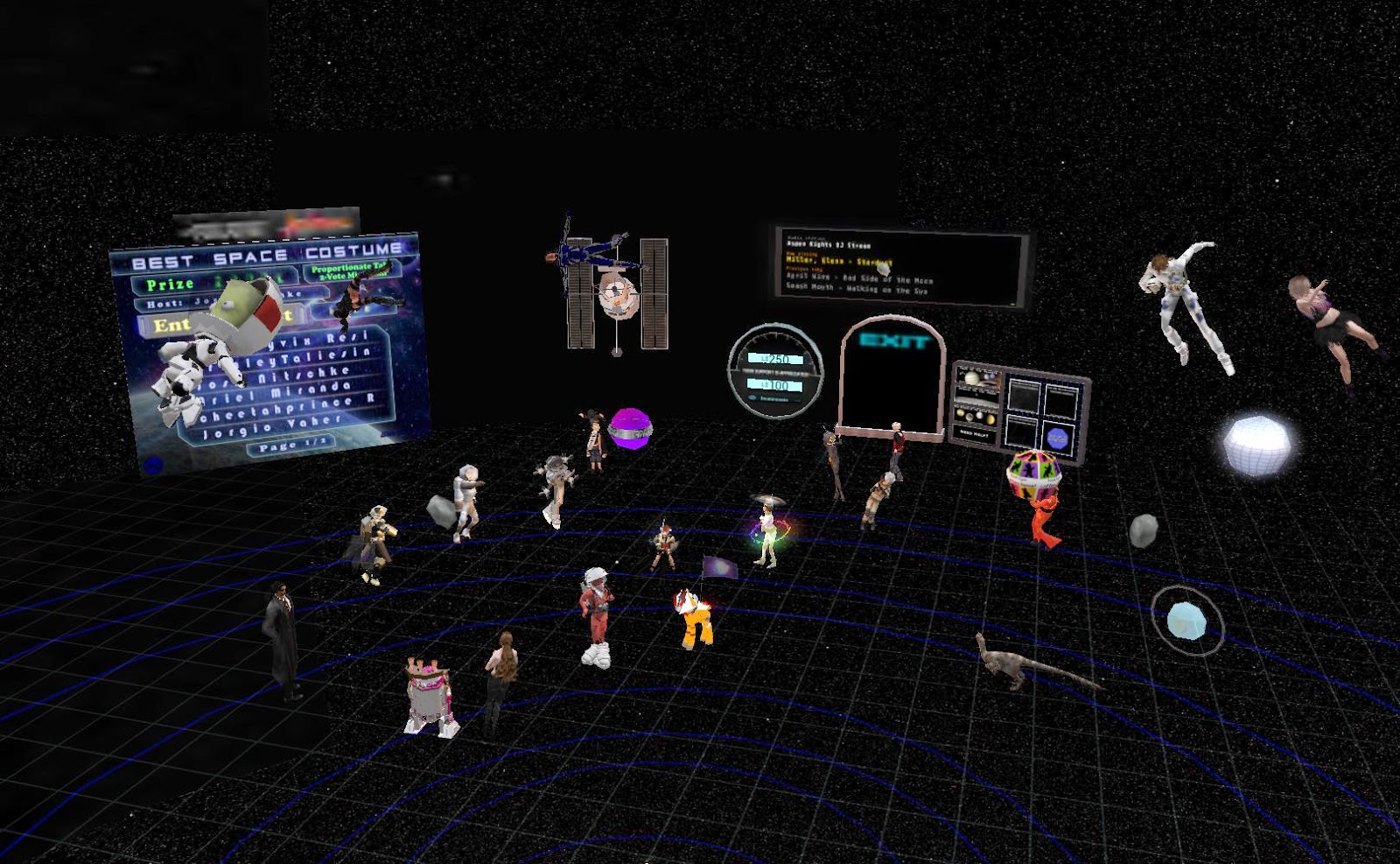 As time went on, more people showed up. People would chat about various things from the space program, to astronomy, to science fiction movies. And there were the jokes, "Robin are you dressed as an asteroid or is my client dying?" 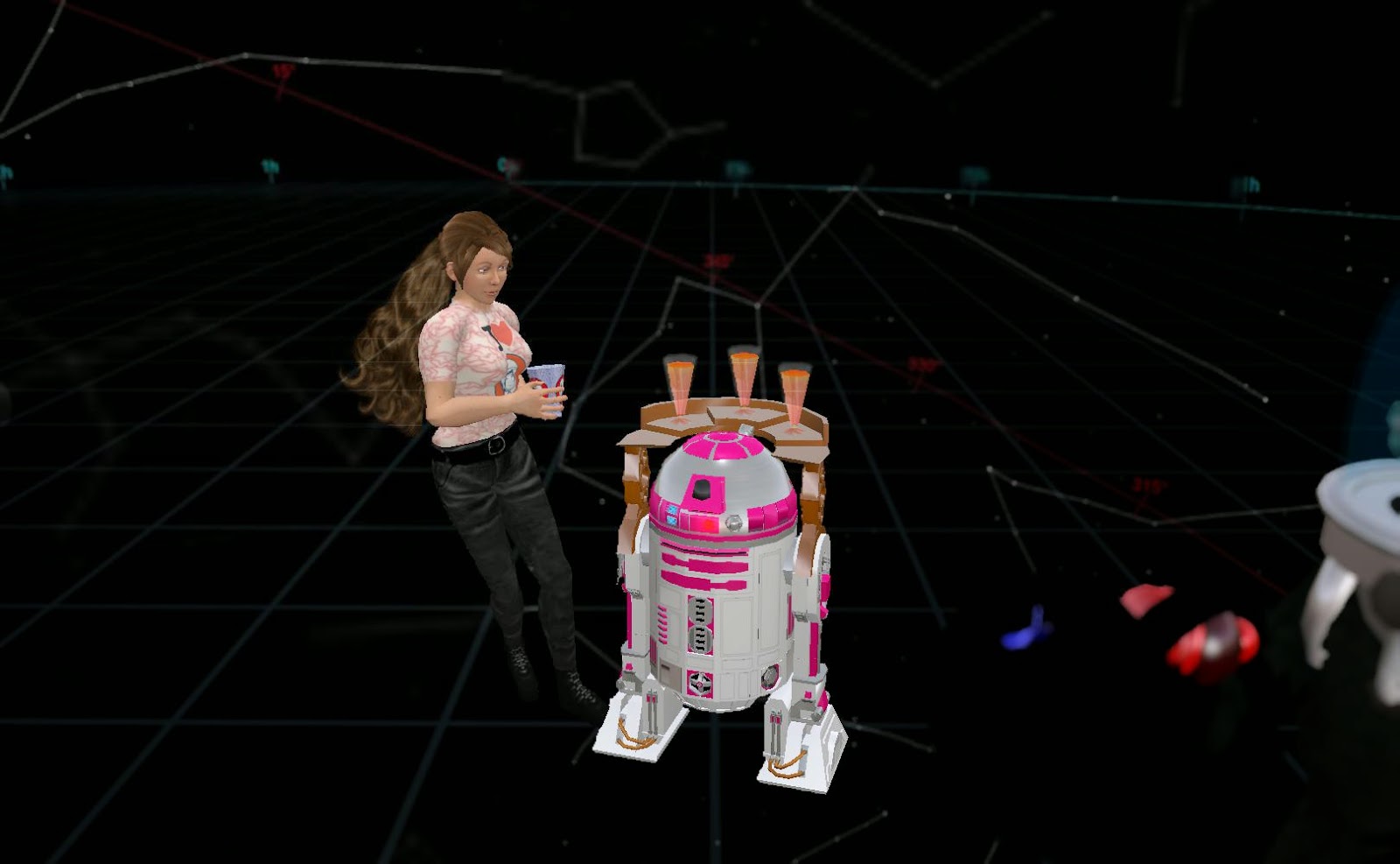 Drinks were available, thanks to an astromech droid avatar. 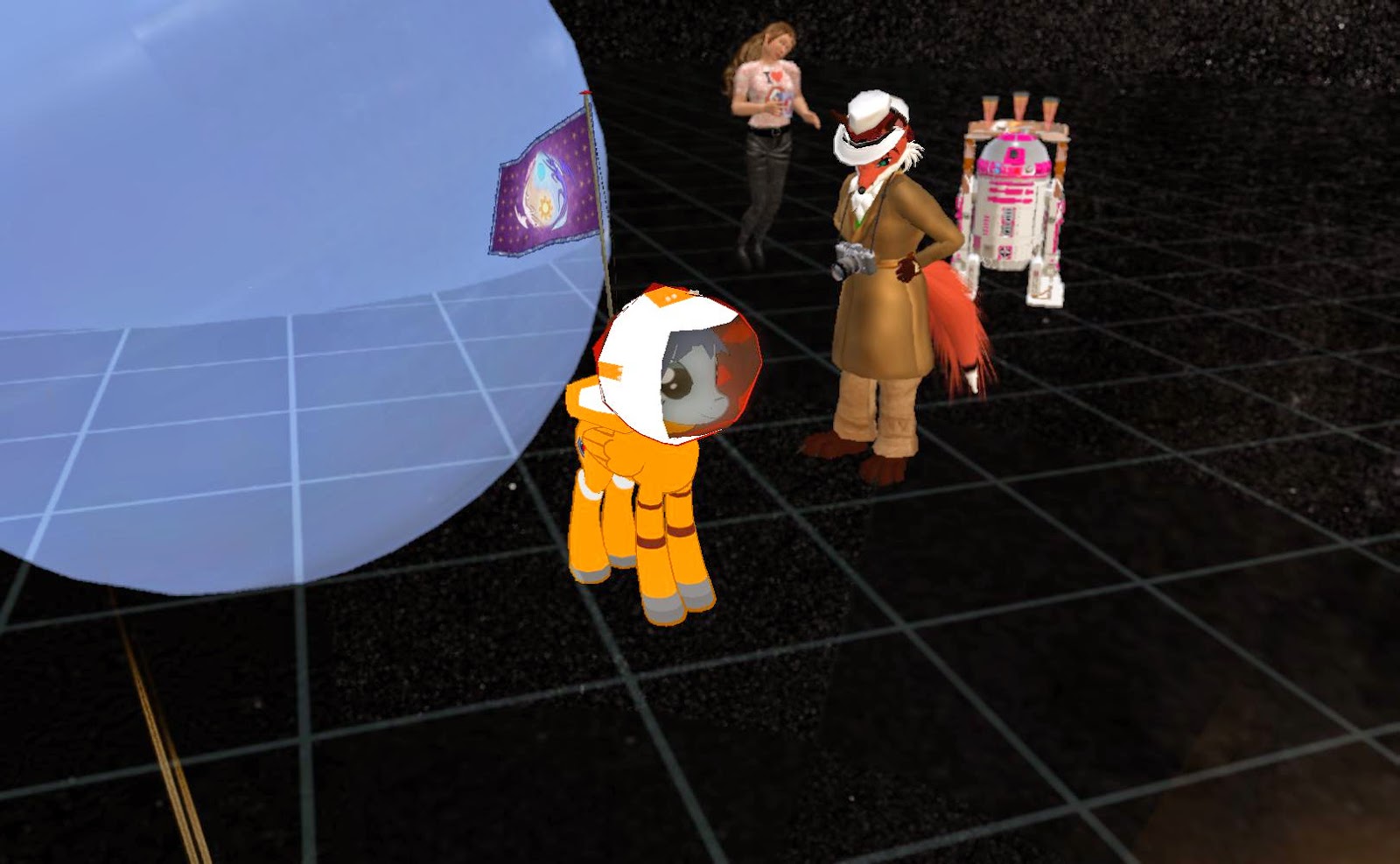 Spacesuits weren't just among those with two legs. 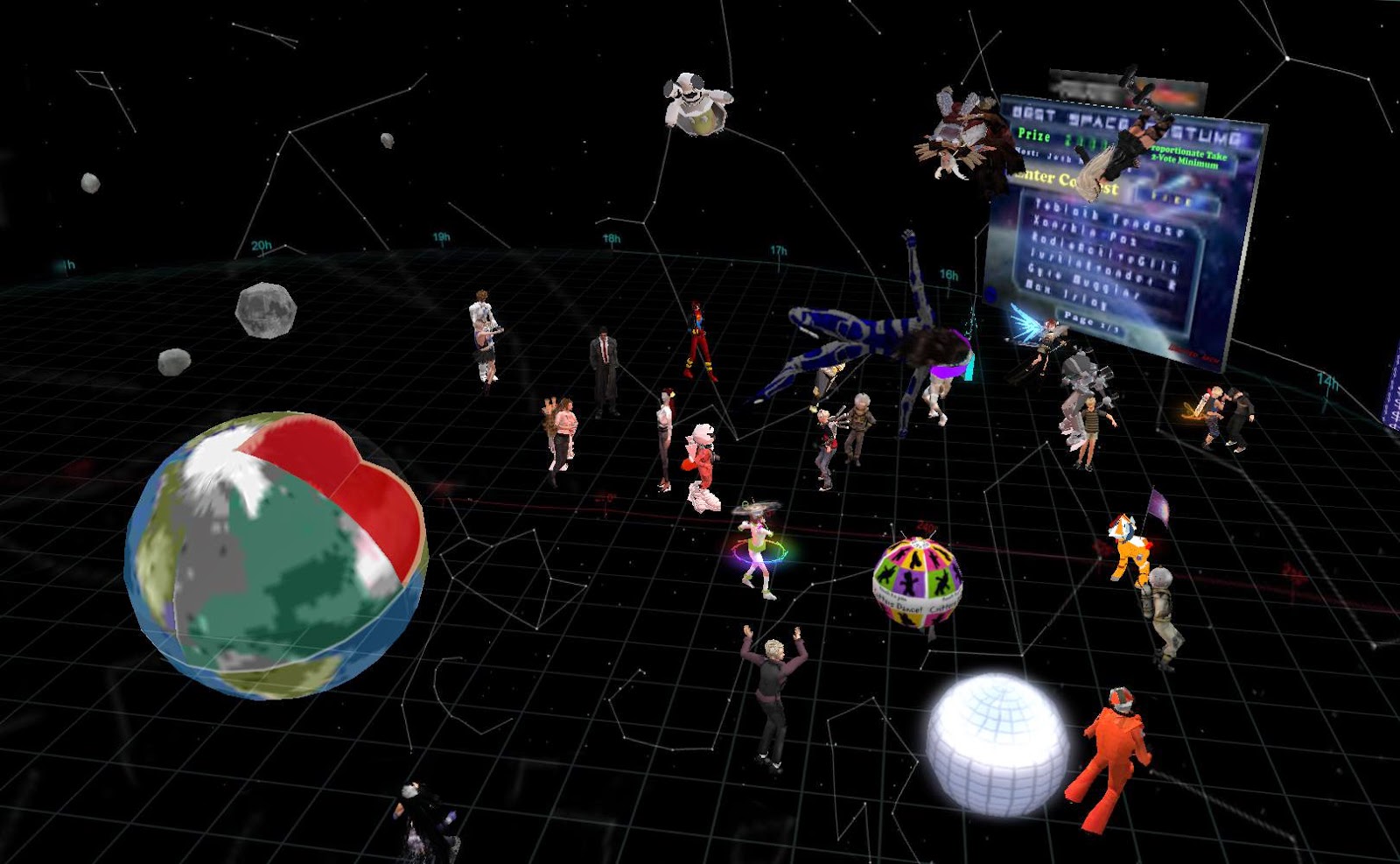 As more people showed up, along with the music, the display provided visual as well as audio treats. Among the tunes were "Surprise," about the Sputnik launch, and "She Blinded Me With Science." 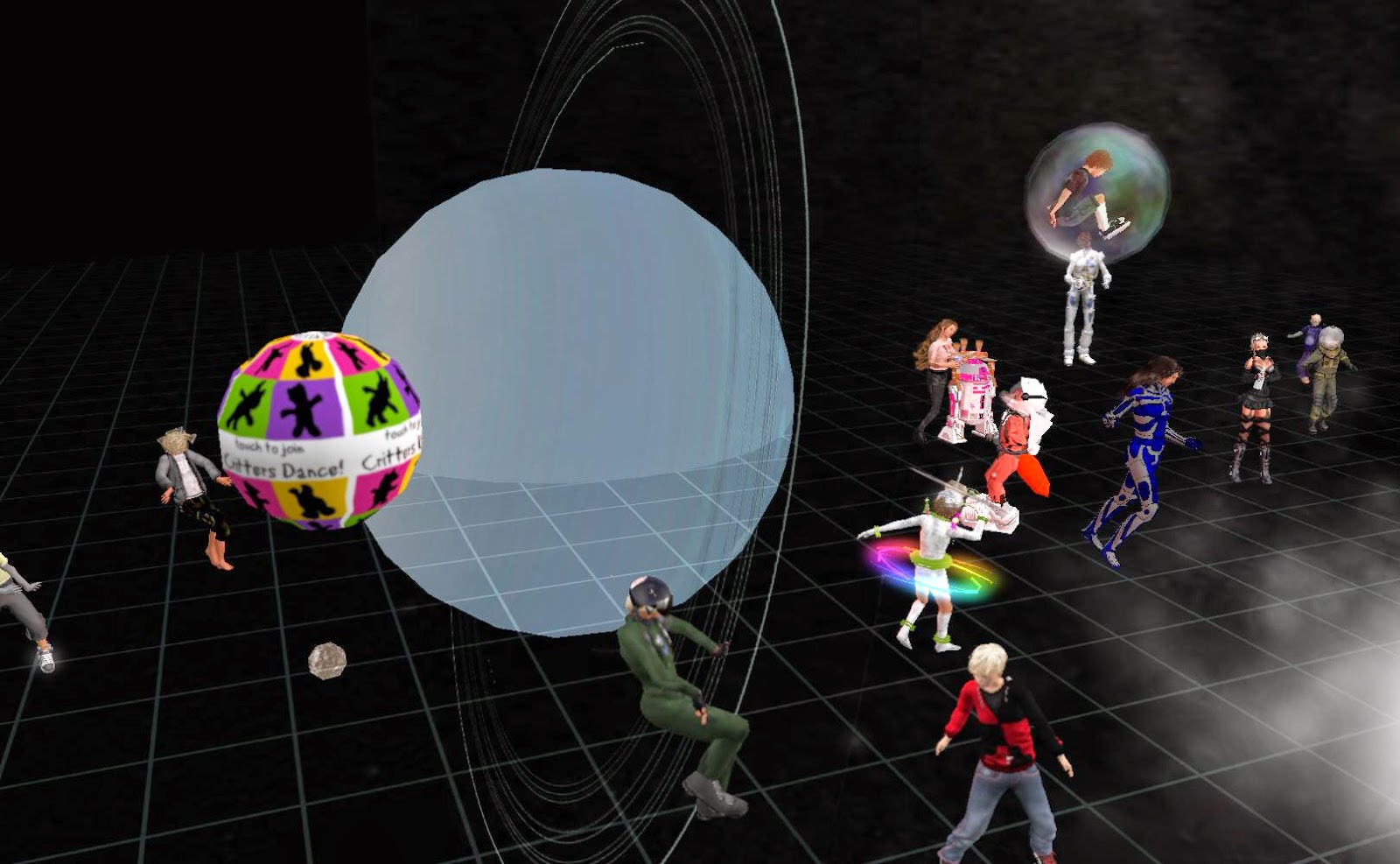 With Uranus in view though, sometimes the jokes got a little cheeky. "Do you have Asteroids?" "No but my Dad does. Some days he can hardly sit down." Funny how the seventh planet used to be pronounced "yer-ay-nus," and after the Voyager probe flyby people began saying "yer-uh-nuhs." 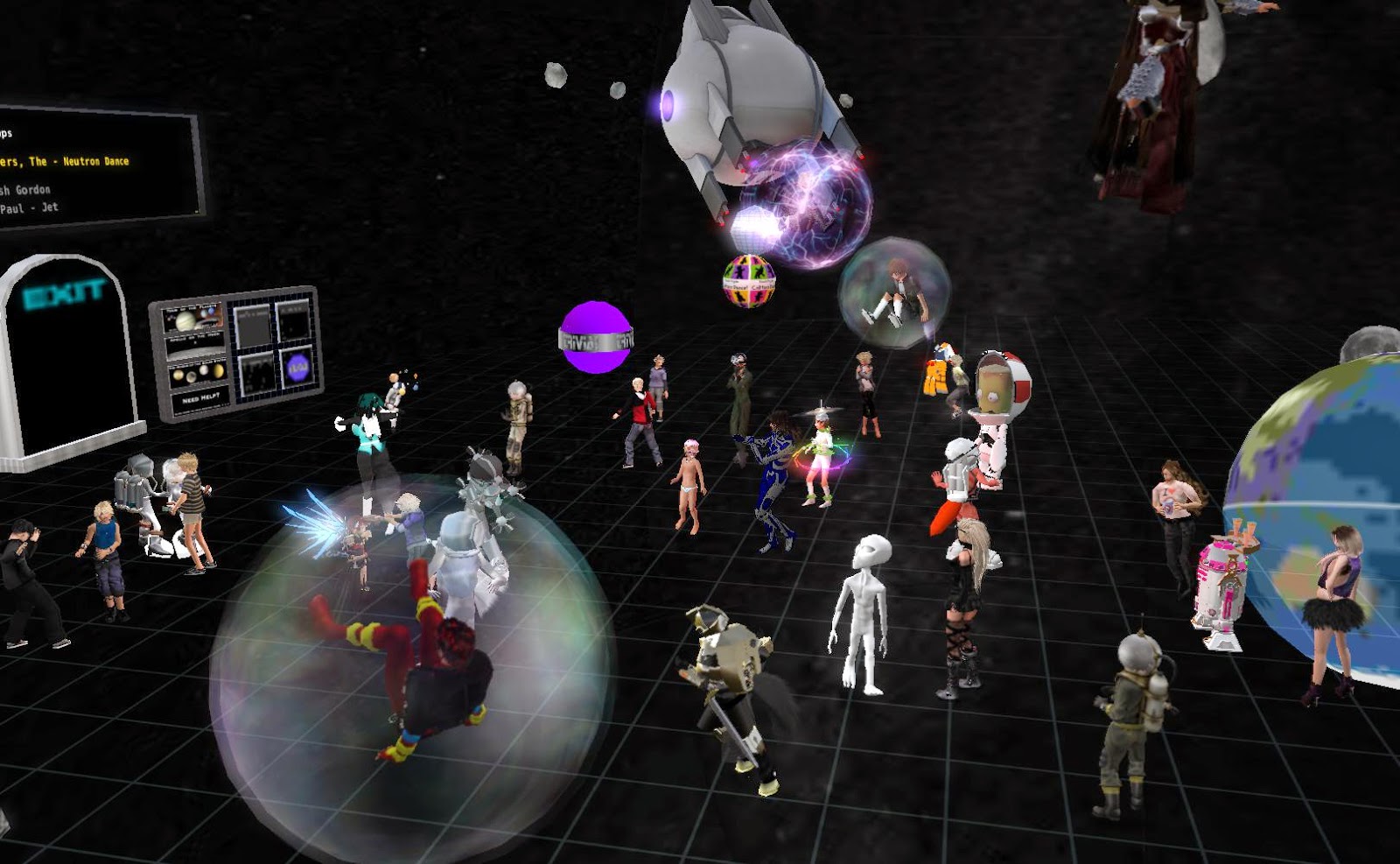 Of the contest, the winner was ExpeditiousPony Resident , who won the Kerbal Space Program game and  664L of a 2000 Linden pot. Honorable mentions were JustinEvander Resident, BrinleyTaliesin Resident, and Gyro Muggins.

And so another Yuri's night came and went, as only Second Life's science fans could deliver.