It is a party that the artist, Moya Patrick, had been throwing once a year for artists and Internet users. It's also a costume party so people can have a chance to get together in costumes. The theme this year is “Media” and people who have been invited are the part of the group, Virtual Ability. I'm a part of the Virtual Ability and as I arrived at the party, it was in full swing. 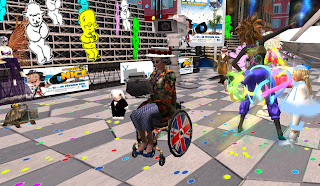 Cheeky Baby was the DJ, rocking the party on with the tunes. Gentle Heron was there as well, enjoying the party as I can see. Practically everyone were there and when asked if the party was awesome, they said yes. The artist, Moya Patrick, was there, filming the party as it went on. Moya Patrick had built a reproduction of the Place Messenger, where the Cyber Nice Carnival is, and he would ask a group to join with the avatars. This year, it's Virtual Ability, a group for people with disabilities.

As people came out in their costumes, we cannot help but to stand back and admire their costumes. Gentle Heron came as a vulture, and Moya Patrick came in a full-bodied red costume that hid his face with little white wings on his back. One woman decorated the wheels of her wheelchair with British flag emblems. 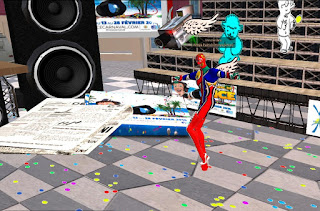 When Moya Patrick invited members of Virtual Ability to join the party, he did something wonderful. He gave the members a chance to come on out and have fun at the costume party. That's what they did. They came out, in costumes, and with big smiles. From what I can see, they actually ended up having a really good time. So good, when the party ended, some people stayed behind. That should describe how much fun we have had during the party.

When I came to the party, I wasn't expecting much. Sure, I did come in a costume. Sure, I did come happy because I got a chance to wear a costume. Sure, I did come, not sure what's going to happen. But all that were forgotten as I started to dance at the party. It's not just a regular party anymore. It's not just a costume party either. It's a party so amazing that even the lag could not diminish it. As people dance at the party, it would become the unforgettable as Mayo Patrick filmed us dancing. The film would be shown on the big screens during the carnival. But it's not just film that's going on. Photos are being taken at the party and Mayo Patrick does plan on keeping the pictures.

Moya Patrick made something come to life, something out of Second Life, something that thrills people beyond words, something that people would come in costumes and still be who they are. This goes beyond wonder. It even goes beyond the word 'fantastic'. There is simply no possible word to describe the awe of the party itself. It is enough for people to come and dance for two hours, and manage to leave happy. For that, I have Moya Patrick to thank. Here are the links:

Link to the film:

Addition: We were later sent by Moya a link to a youtube of a film he'd taken of the event.

(Click here if the video fails to play)
Posted by Bixyl Shuftan at 6:00 AM