On Saturday last weekend, the Roma community held it's Lupercalia festival, starting it with a ceremony. Isa of Chaeronea and Zelda Horatia Valpolia were the ones who started the rite. "The rite will begin in a moment, but before we start, we'd like to explain a bit about the Lupercalia and the rite. The Lupercalia festival was in honor of the She-Wolf (Lupa) who suckled the infant orphans, Romulus and Remus, the founders of Rome." Isa of Chaeronea said. "The name of the festival, Lupercalia, translates into "Wolf Festival." The festival was celebrated near the Cave of Lupercal on the Palatine (one of the seven  hills of Rome), to expiate and purify new life in the Spring. The religious ceremonies were directed by the Luperci, the "brothers of the wolf (lupus)", a corporation of priests of Faunus." said Isa of Chaeronea 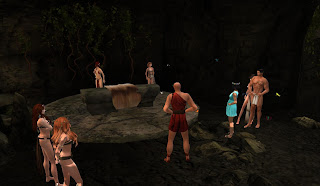 "In today's rite, we will invoke Faunus Lupercus (otherwise known as Pan in Greece), as He is the God that presides over Lupercalia." said Zelda Horatia Valpolia. "Lupercalia is primarily a festival of fertility, and Faunus was seen by Romans as the epitome of the lusty passion from which fertility is born."

Isa of Chaeronea explained what the rite is all about and how it works.  "The ancient festival began with the sacrifice by the Luperci of two male goats and a dog. Next, two young patrician Luperci were led to the altar, to be anointed on their foreheads with the sacrificial blood, which was wiped off the bloody knife with wool soaked in milk, after which they were expected to smile and laugh; the smearing of the forehead with blood probably refers to human sacrifice originally practised at the festival." said Isla of Chaeronea.

Zelda Horatia Valpolia also explained. "The sacrificial feast followed, after which the Luperci cut thongs from the skins of the sacrifice, dressed themselves in the remainder of the goat skins, in imitation of
Faunus Lupercus." said Zelda Horatia Valpolia. "They then ran round the walls of the old Palatine city with the thongs in their hands in two bands, striking the people who crowded near." 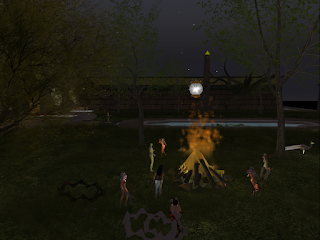 "Girls and young women would line up on their route to receive lashes from these whips. This was supposed to ensure fertility, prevent sterility in women and ease the pains of childbirth." said Isa of Chaeronea. "Today, the blessing we ask is for the fertility of body and of mind, a blessing on the creative process in all it's forms."

Zelda Horatia Valpolia said, "Here in our Roma, we do not practice blood sacrifice, but we will be
celebrating the latter half of the festival, much as the Romans would have. After today's rite, we will lead you in the Running of The Luperci - as you race behind us, the other Luperci will follow behind you to bless you with their lashes as they pass." 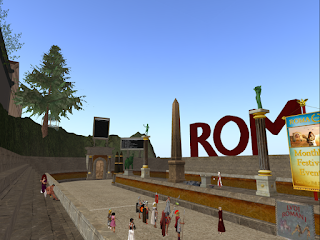 With that, Isa of Chaeronea announced that "The Rite will now begin." While most of the rite was spoken in Latin, we came to understand what this was all about. The rite was with blessings and offerings.  When it was over, it was then announced "that the Luperci will now lead you from the cave for the Running of the Luperci. This year we race to the Gardens of Maecenas for our post-ritual celebration! Zelda and I will lead you, and the other Luperci will follow behind the crowd, snapping their whips to bless you. (And hurry you along, perhaps!)"

I can't say for the others, but I did learn something new from the rite and the race.  After all, there is always something new to learn about every day.
Deafleagacy Darkbloom
Posted by Bixyl Shuftan at 6:00 AM