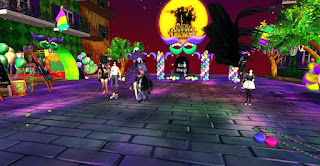 Mardi Gras is fun in Second Life. I took at tour to see what was going on in various sites to celebrate. "Mardi Gras Town" at Townies was the most lively and colorful venue I could find on Monday. There was a band playing fun music and dancers in various costumes made special for the day danced in the streets with confetti falling from the air. Inside the shops you could find any possible costumes and décor for the celebration.
I stayed for a while to enjoy the sounds and watch the dancers. Lots of the colors of Mardi Gras visible: purple representing justice, green for faith and gold for power.This tradition began at the first Mari Gras.  Rex, the King of Mardi Grass selected the official Mardi Gras colors in 1872 to honor the visiting Russian Grand Duke Alexis Alexis Alexandrovich Romanoff, whose house colors were purple, green and gold. The 1892 Rex Parade theme "Symbolism of Colors" affirmed the colors' meaning. And it continues today. 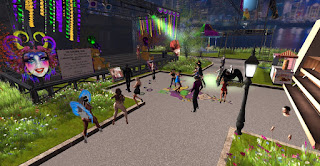 I moved on to the Santorini Club which has been celebrating for days with great djs playing for numerous parties daily. The club was decorated for the occasion. I took a walk around to gaze at the finery and the view of the City of New Orleans in the distance.
Where to better experience the Mardi Gras than in New Orleans. I visited the section of New Orleans that is modeled on a real section called St John Bayou. At the corner of Audubon Street There is a stage that was filled with St John residents dancing in Mardi Gras regalia. Down the streets came floats. I watched the parade for a while but then wandered down the streets to look at the structures. All along the street there were buntings hanging from the windows in the purple and gold colors. Looked great. 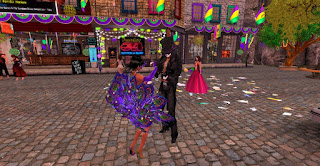 Another sim I went to but was too early for the party was in Piano Beach at Cay’s at Woodland Lake. I admired the buntings there too and picked up some nice beads to wear. There are replicas of buildings in the French Quarter of New Orleans that I loved when I was there. There were some street musicians and artists waiting for customers.
I stopped off at Bourbon Street in Bluesville Station New Orleans and, wow, they had quite a party going on! The street was littered with confetti and other trash from the parade. I arrived near the end since it had started about two hours earlier, but there were still people dancing and chatting.  Dj Nadzuko was playing the blues.
Tuesday at Creations Park I attended a very lively outdoor party where Josie Atherton was performing live for the benefit of Team Fox, Parkinson Disease Support. There were some great costumes there good music.
I finished off my day back at St Johns at a great street party with grand outfits and dancing to Cajun music and some blues. It was a festive Mardi Gras in Second Life again.

Gemma Cleanslate
Posted by Bixyl Shuftan at 6:00 AM