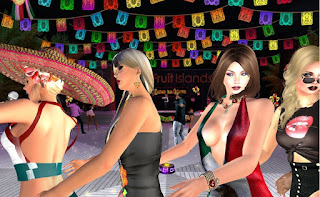 The 5th day of May translates to Cinco de Mayo in Spanish, a significant celebration in Mexico, United States, and in Second Life. Humankind is the celebrating animal, and assuming that the vast majority of avatars are human-driven (like mine), it is SL’s mission to facilitate our celebrations; the purpose of SL is fun!

This year (2017), I decided to attend as many Cinco de Mayo events in SL as possible… Many really great celebrations, but one event really stood out. Mango Yacht Club  decorated their venue top to bottom with glowing symbols of Mexican pride and celebration. Two live latin singers in duet, Livet Diesel (the guy) and Di Ella (the gal). Stage dancers in traditional costumes. Conga lines. No time limit. Celebration ensued. A classic SL funster event.

Why is Cinco de Mayo important? In 1862, an army of 4,500 Mexican troops defeated an overwhelming 6000-strong force of Napoleon III's Army, the world's best trained and equipped. While Mexico lost less than 100 men, Napoleon III lost 1000, and were forced to retreat. The victory is a miracle and a great inspiration to Mexicans, and those of Mexican-heritage in America, where it is a more important holiday. Had Napoleon III been successful in Mexico, his alliance with the US Confederacy could have reversed the US Civil War outcome.

P.S. The 5th of May is also Dutch Liberation Day, celebrating the day of defeat of the Nazi forces in the Netherlands in 1945. Many of us in Second Life honor this holiday and all holidays which celebrate human dignity.