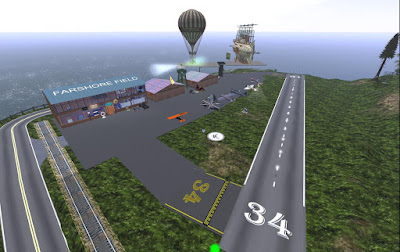 Saturday May 20 was the day of one of the big events each year for the Sunweaver community and it's Relay for Life team the Sunbeamers: the fourth annual air show at Farshore Field in the Pacific Waters sim, owned by Cynthia Farshore. 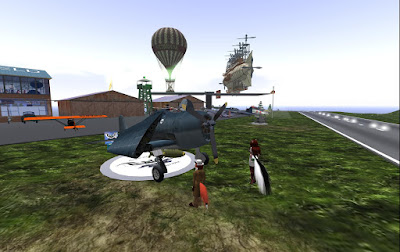 The event has been called an air show and fly-in as people have been encouraged to bring in their own aircraft to fly, in addition to using the plane-rezzer at the place given by Jessicabelle Dayafter. Cynthia had put up most of the items up just for the show, along with Shockwave Yareach. 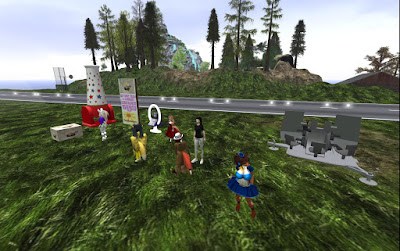 The event started at 8AM SL time. There were only a few people around at the start, but before long more came in. Some went to try the air cannon, seen on the left of this picture. 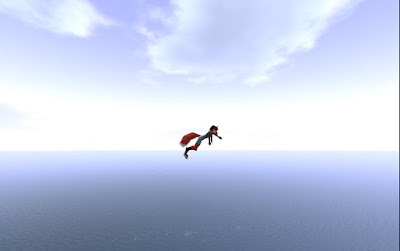 When fired, the cannon would launch whoever was inside into the air, such as this high-flying vixen. 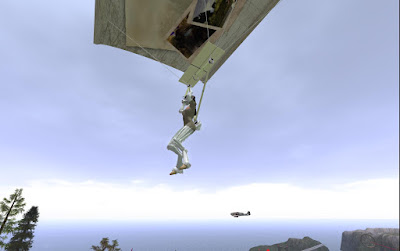 But what goes up must come down. Cynthia demonstrates the limited edition parachute with the 2017 RFL in SL logo, which residents were recommended to take and wear before going up. 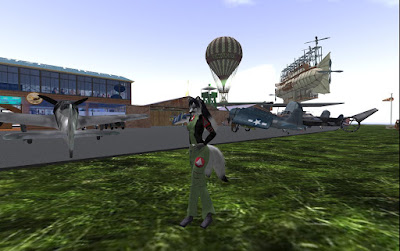 Nydia Tungsten was one of the pilots at the show. 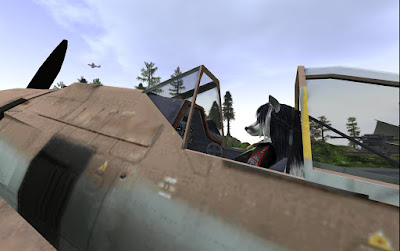 Giving the Focke-Wulf 190 a spin. While this WW@ fighter was not as common as the Messerschmidt 109, it was better armed, with options to carry bombs and rockets. 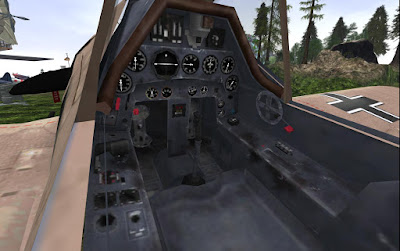 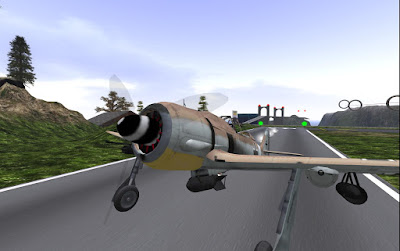 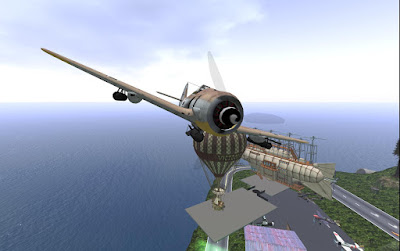 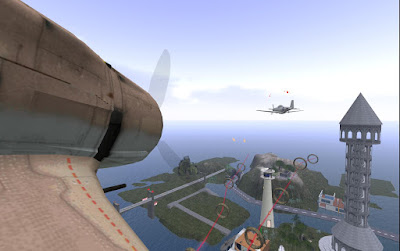 Zeroing on one of the target planes Cynthia had going in the air. After taking a number of hits, they would explode and plummet, only to be re-rezzed moments later. 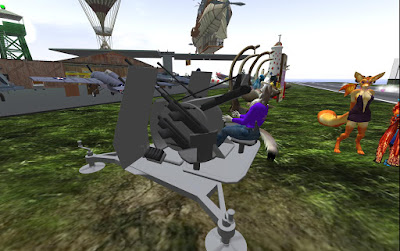 While the airborne targets couldn't fire back, there was an anti-aircraft gun on the ground that could, which Shockwave tried out. 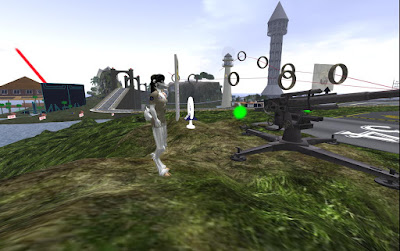 Cynthia had set up another gun, but not for firing into the air. 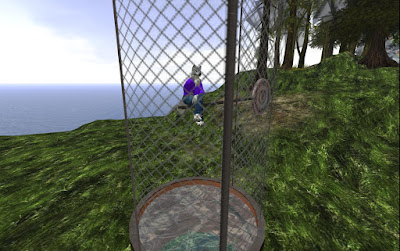 It was for firing shells at the dunk tank instead of lobbing tennis balls, with hits sending volunteers into the drink. But getting shots to hit the target could be a little tricky. 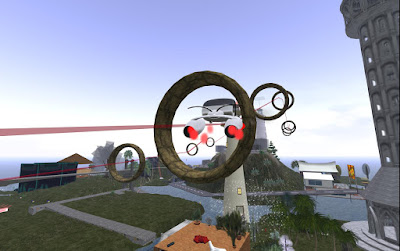 Trying the planes myself, I ended up lagging and crashing. But there was something more my speed: an obstacle course set up by Cynthia and Shockwave. 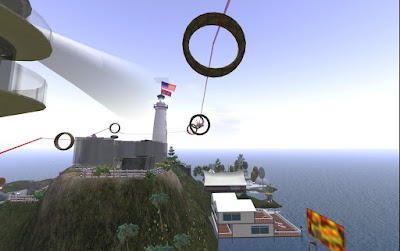 The course went into the next sim and back. 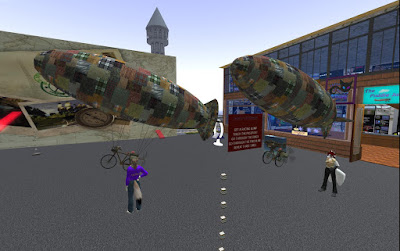 There was a contest for the best time made in the course, but to qualify one had to use these bicycle blimps. I guess I didn't do too bad on mine, but not the best. 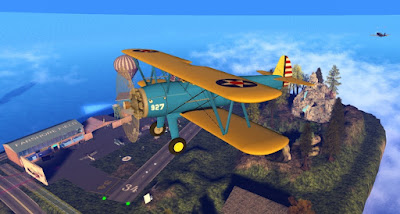 Wildstar Beaumont came by and took some pictures while yours truly had to take a break for lunch and errands. 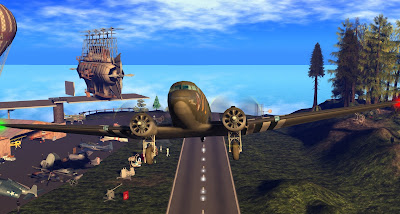 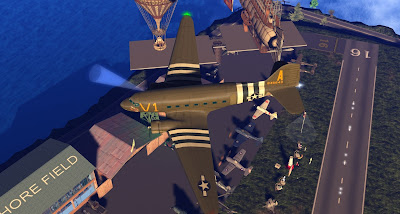 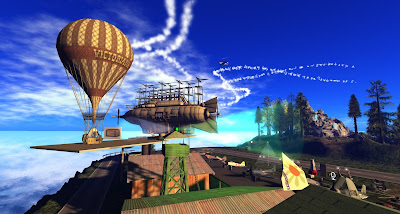 Wildstar was able to get some great pictures of the clouds and contrails. More pictures of his can be seen on his Flickr album of the event. 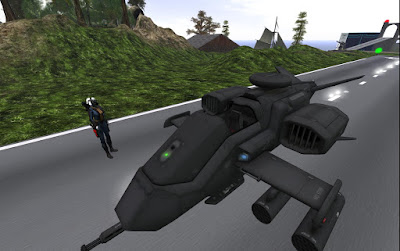 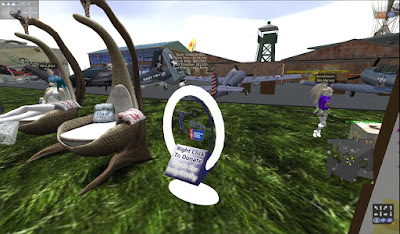 The event raised close to 22,500 Linden dollars. A good amount. There were a few whom had been hoping for a higher turnout, but a few people told me they had been preoccupied by real life matters that day. Otherwise they would have shown up. Plus several other Relay events that day cut down on those from other teams dropping by. Rita Mariner made an announcement soon after the event.

Beamers:  The 4th Annual Air Show, at Pacific Waters, we held SAT, May 20th, went off pretty good.  While there wasn't a huge turnout, we still did good regarding donations and Cynthia's and Shocky's efforts netted us a little over 22K Lindens.  Not shabby.  There were just too many RFL events going on to expect a huge turnout I am afraid.  Those of us that did show up had fun, mostly getting shot into the air, by the cannon! Others just enjoyed flying around.

Cynthia certainly kept the ball rolling. After the air show, more money continued to come in, as of the writing of this article over 40,000 Linden dollars since the event. There is some talk about making other teams part of future air shows, such as Fly for Life. But for now, the Relay season continues, with the Sunbeamers having their tributes to the late Artistic Fimicloud this week, on May 23 at the Happy Vixen and Friday May 23 at Club Cutlass.