At the Rosemist Isle sim, the KT Autism Festival is taking place. At the event, there is music, shopping, and things to see. Raising money for the World Autism Organization, the benefit will go on to July 31st. The fundraiser is unusual as that it takes place underwater, with sea grasses, starfish, coral, and other things from the sea around the place. 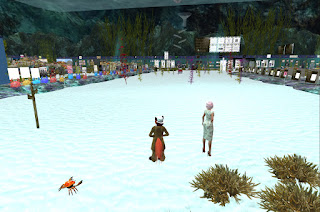 I dropped by the day before the event started, and had a few words with Amythe Moonlight, the head of Made By Moonlight Rosemoon Designs, who was part of the staff of the fundraiser. "It got so big this year we had to take a whole sim," she told me after I arrived, "and make a map of the stalls. We have four hunts goin gon, one in the stalls, one to find a fifty Linden box of textures every day, one where things that shouldn't be under the water will give you a word when you click then so you can make a sentence, and a last one where you will find song reference in the decor round the sim."

But not everything was underwater Amythe pointing out, "Up on the water's surface we have a party boat with a bar and restaurant,and more dancing of course," later pointing out there was a teleport point up to it. She pointed to some vendors, "The gacha machines are held in place by crabs down this side. And most of the stalls are set up now. On the other side of the dance area we have one of a kind auctions." 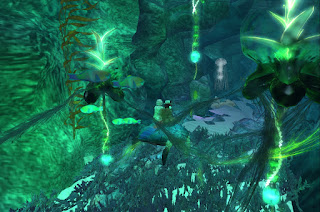 Amythe then invited me to go on a ride. We walked over to a sea turtle and both got on, recomending I change the sun setting in my viewer to Midnight, "makes a huge difference. You don't see the lights without Midnight (smile). She joked that this was the first time she had tested it. The ride was very detailed, going into a cavern, then down into a whirlpool vortex in the middle and into another cave. The turtle sailed out into a larger cavern where there was a forest of kelp and some luminous plants that glowed, some fish darting around between them. Eventually, the turtle circled around, and we went back up the vortex from whence we came and back out of the first cave, "So that's the underwater ride." 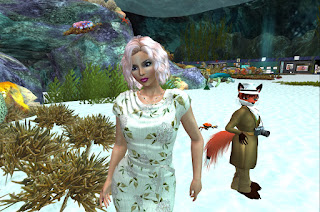 Amythe then continued about the festival, "We have around 100 stalls this time. People have been offering help and items. It seems Autism is something many like to support." She personally had been helping out that day for over nine hours and would probably be around for several more. I asked how much of the items was going to charity. She answered, "We have several ways of donating from sales as well as the auctions and the exclusives and festival bargains set for 25L. Some of our merchants are giving 100% of sales.  If you walk round you will see the special vendors in the stalls. And those who don't have them have provided exclusive one off auction items or  donated in some other form. Several have given items to be used for raffles or hunts and/ or made exclusives items just for the festival. The merchants have been a lovely crowd.The Kushitales store is mine (giggle) with the 'Lizard of Oz' book and collectibles. ... The donation boards give gifts- different in each one and changed at milestones. ... We hope to make a really good amount for Autism. " She pointed out that the land had also been donated for use by the festival by "one lovely lady," Hanta. 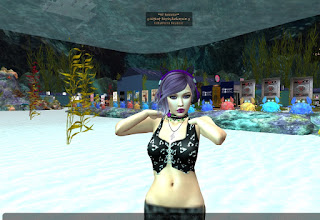 Amythe introduced me to one merchant, KitKatPerrin Resident. When I asked how she found out about the festival, she answered, "Firestorm had an announcement that they were looking for designers. I ran the idea across my business partners and we decided that since it went towards a charity that touches us, we'd try it." Of her business, "Shadow Creationz is a group of three people, me, Ronin Furyo, and Luna. The products I myself have up are the lyrical tease outfit, what I'm wearing now, which is for sale for the 25 Linden sale price with all profits going to the charity." I noticed she had the Relay's UAC Medieval Faire in her profile and asked her about it. Smiling, she told me she had products on sale for charity then, "I was working under my Feline Fine Fashions name there." Switching back to the festival, "The other outfit we have for sale is 100% to chirty - it's the fancy top and skirt that Luna is wearing for 65 Linden. We also have two hunt items for 10 Lindens apiece." 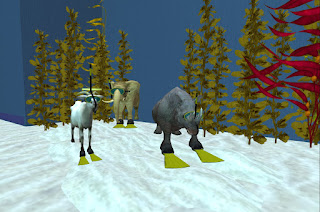 Amythe pointed out the three mascots of the festival, "The Elephant the Rhino and the Holy Goat. ... When Kushi Mitch and I do an event, we put them out. But I put snorkels on them this time so they didnt drown." KitKatPerrin joked, "Ehh it's SL, they'll respawn." that was followed by more laughter.

Amythe emphasized, "I want to flag up the enthusiasm  and helpfulness of all the merchants. Without them there would be no Festival, and no money for Autism. They have all been so patient and nice." KitKatPerrin went on to say, "If anything I'm doing here at the festival spares one person the struggles I've dealt with in my life, then it's worth it."

"It's going to be fun the next two weeks," Amythe told me, "I hope the merchants will come and spend time here too and mkeet some of the customers and do some networking and bring everyone they know." 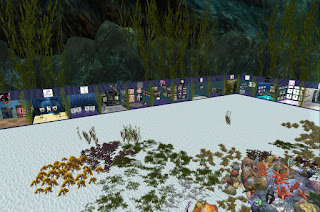 Amythe would later tell me via a notecard it wasn't just a hundred stalls, but almost a hundred different merchants involved at the charity, with room for others should they wish to join during the event. "Many merchants have offered a percentage of their sales to the Charity. This varies from 25%-100%! Merchants have also donated one of a kind items for Auction which will be ongoing throughout the Festival and exclusives items with a minimum of 50% going to the Charity. Some have put out 25L Bargains or 10L hunt items others have simply offered a percentage of anything they sell during this time. We have so many different kinds of merchandise being sold. Clothes and Jewellry, art and photography, wedding items, furniture, things for home and garden, gifts, textures, full perm items even rollercoasters. Although the shopping is amazing and there are some wonderful bargains to be had we also have hunts going on, djs and live singers at set times in the day, a treasure chest with a different texture pack each day, a hunt with song title references to spot, an out of place hunt where you'll see things that wouldn't normally be on the sim, a restaurant and bar up on our party boat and a turtle ride that takes you down into underwater caves."

They were also keeping track of the money, "We have a banker alt to keep the donations seperate and are able to check all transactions to ensure we have  everything documented properly.two to three weeks after the event closes we'll be sending out a copy of the receipt for the donation to all merchants and anyone else is welcome to request a copy of it."

And when is the next festival? "Ah now we need a little time to  recover from this one first but I would not be at all surprised to find another festival sometime between October and December."