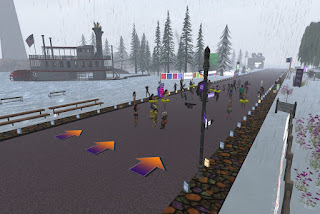 On Wednesday July 19, it was the last day the Relay sims would be open to public before the day they were scheduled to be torn down. So people were going about the track to see the campsites and designer sims before that, either those that they hadn't seen in detail yet or those they wanted to get one more look at. The Chinese temple at RFL Journey and the Egyptian build at RFL Imagine were among those that received much praise for detail in the chat I observed. But the day would also be the occasion for what's become a Relay for Life in Second Life tradition: the "Flood Party." 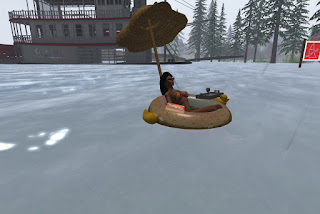 The Flood Party didn't start out as a planned event, but an impromptu one. In 2010 on the last day before the sims on the Relay track were cleaned up, there were various parties and gatherings in the sim, and one sim manager on a whimsy rose the water level ten feet, flooding the place. The response was people flocking over and partying, often with inner tubes and inflatables. Since then, the "flood party" has become something of a Relay tradition, taking place on the day before the takedown. And this year was no exception, the announcement given the day before, for 5PM SL time. 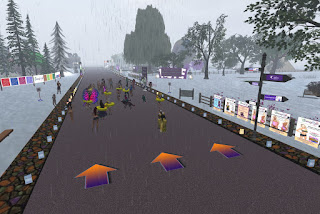 Location TBA on Wednesday
Join us one last time for a Farewell party to the Relay Sim.
Dance, party and share your relay memories!

Bring your inner tube to put on and wear your water proof clothes....just sayin.

And while we explored the Relay track and things, we heard the announcement for where. 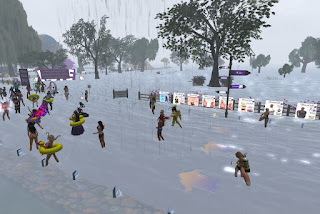 T1Radio Meteorologist Hughes Lee Wronge has predicted heavy rain and flooding in the Grid Area around the RFL Regions..  To Begin about 5pm...

Is that going to Stop Us? NOOOOOOOOOOOO 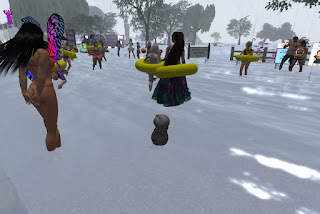 So at 5PM, I headed to RFL Victory, and already a large crowd had gathered. Some were already in swimsuits. It was already overcast and raining. "think I got the umbrella out just tad late," one resident commented, "soaked to the bone (laughter)."The sim already had a good amount of water in it, enough for a riverboat to be floating in it. And it wasn't long before the water level began to rise, "Here comes the water." "Water rises fast in these parts." "Water is rising, soon the rubber duckies will be put into use." It was becoming obvious unlike some years, the water wouldn't just be ankle deep. 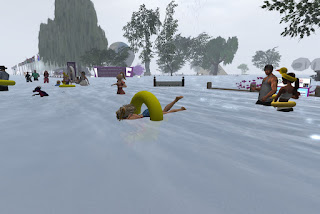 People were having a good time, greeting people as they arrived and enjoying the water. But there was one issue: "Rowena!!!" "Can't see Ro....go under already?" Rowena Dubrovna, the Relay's tiny otter, was a height smaller than the water level. "Someone save the Otter!" Prettykitty Gumbo shouted. "Otter can sit on my shoulder," Sienna Thor offered, then wondered, "on second thought ..." "Can't otters swim?" one girl reminded. Another tossed a life jacket to the tiny otter. 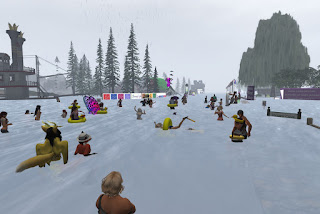 The Strange Wolf (Henning Lionheart), noted more for his slobbering, offered to do another doggy action to "help," "I can help the flood along." "Put yur leg down!!!" one girl giggled. The canine continued, "But.. It wouldn't be a bother to me.. Not even a wee bit.  I would be very relieved to know I'd helped." After his usual shaking and sending bits of slobber around, he looked for someone to stand on to avoid getting wet paws. Then Trader began running through the water and splashing those nearby, "Ack! Trader!" "Watch out Trader!!  Got me wet!!!" 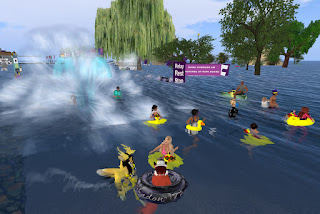 Annika Eve Braveheart started passing around inflatable duck floaties, "I have ducks, who needs one?" "AFLAC!" "And we floot on down the river," mused someone.

I then began noticing large splashes in the water, then things being thrown. Then Annika called out, "Who is throwing water balloons? ... Missed me! *GIGGLES*" The Strange Wolf called out, "I'm not sure that was all water.. I saw the cat play with the balloons." Someone chuckled, "In years past we had the coast guard out here." Another tried to get away from the water balloons, "Ack, my bikini is going to get wet!" She was told, "Been pouring all day hun." 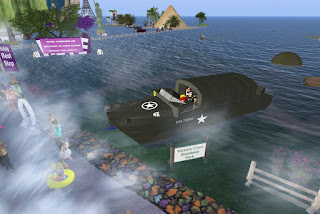 More continued to show up. And eventually the floaties and inner tunes were joined by something significantly larger. A WW2 US Army DUKW had sailed up to the group. Inside, Rita Mariner, the captain of the Sunbeamer team, was at the controls. Someone mused, "If it drives like a DUKW, and it sounds like a DUKW, it's a DUKW." Annika joked, "I should have brought my paddle board. *GIGGLES*" Some other Sunnies were aboard and got out, joining the song and dance in the water. 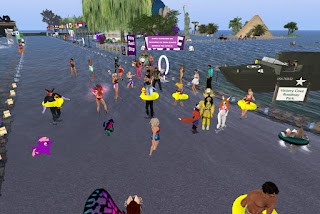 Eventually, the water began receding. There were a few "awwwws," people not wanting the party to end. But eventually people would go their separate ways. Some would go back to exploring the track. It was just hours away to "Takedown Day," and wanted to see the builds while they could.

As always, the "flood party" was a bit of last minute fun before the lights went out for the Relay sims. Unlike a few times, it really was a flood. It was light-hearted fun in deep water.