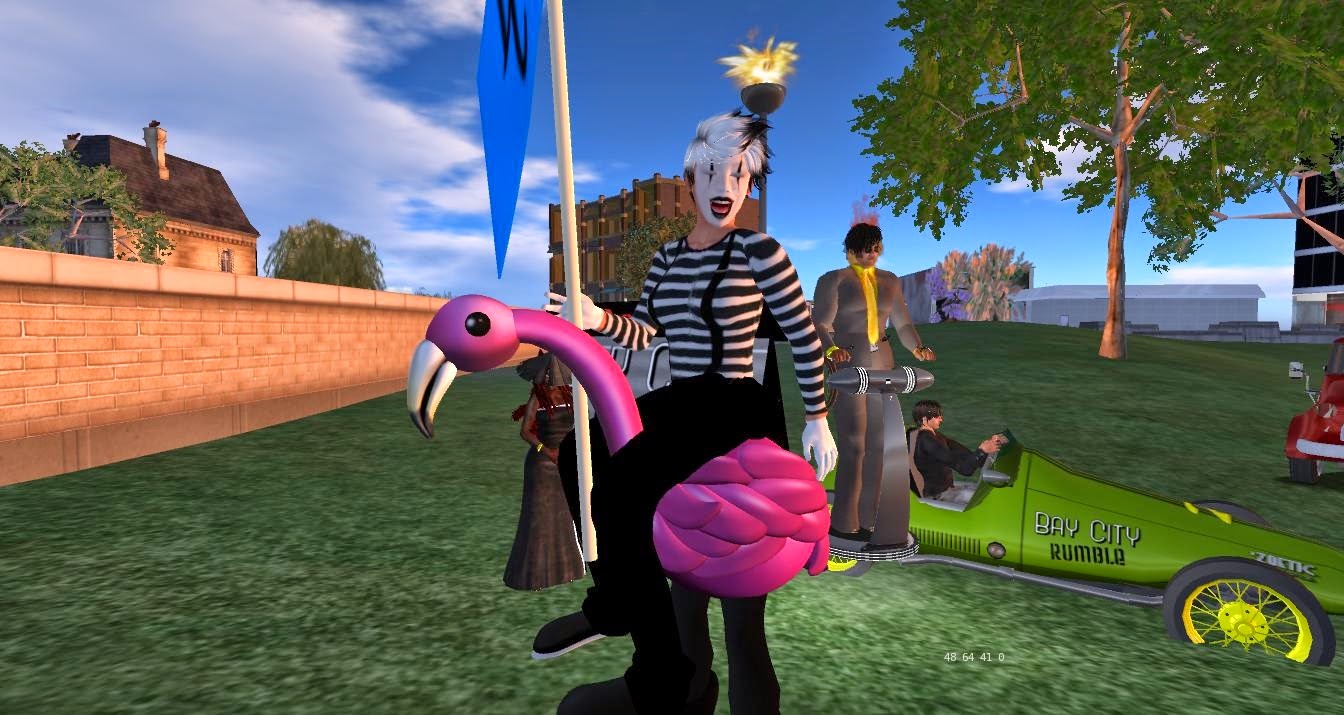 What a hoot!! Sunday May 18 at 12:30, the parade started. Right on time Uccello Poultry led off the celebration of the Bay City 6th Anniversary parade . From the start to finish it was an amazing event. 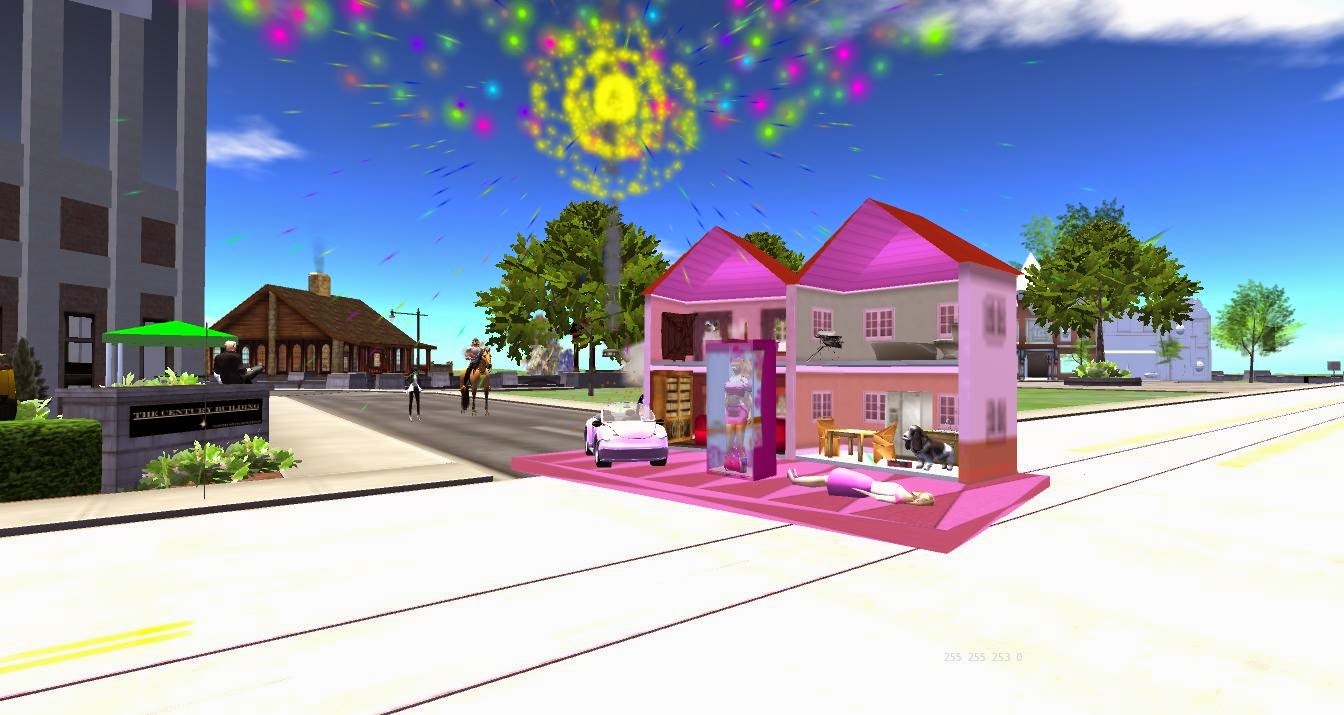 Elegant floats took the corners with some trepidation but for the most part made it without a hitch. 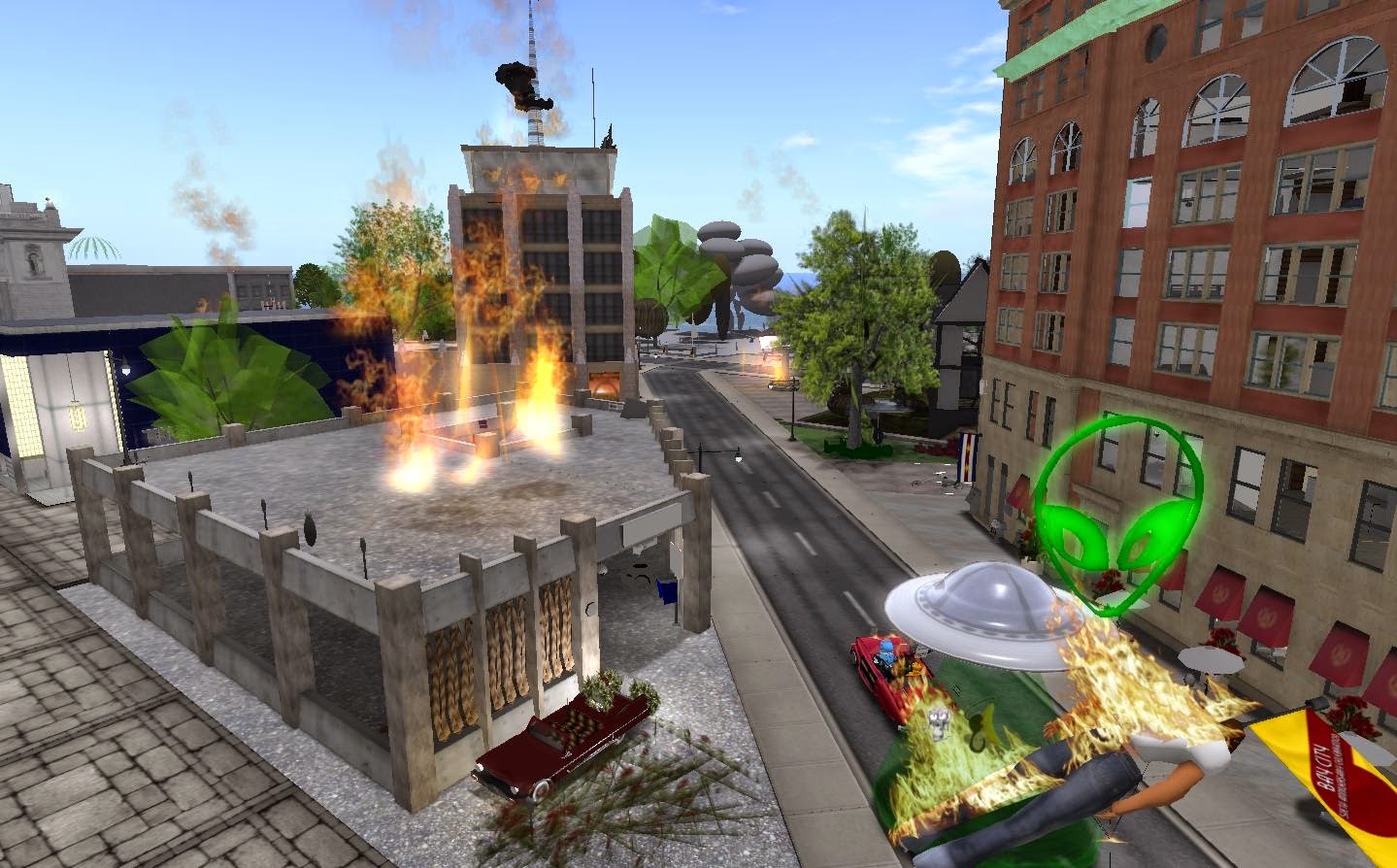 Noise makers and fire abounded. The fire was deliberate. As you know one of the most loved citizens, Ever Dreamscape, passed away so she was dearly remembered during this time. I ear she loved to set fires so in her honor most of Bay City was in flames when I checked in this morning. Fire was prevalent even in the hair of some. 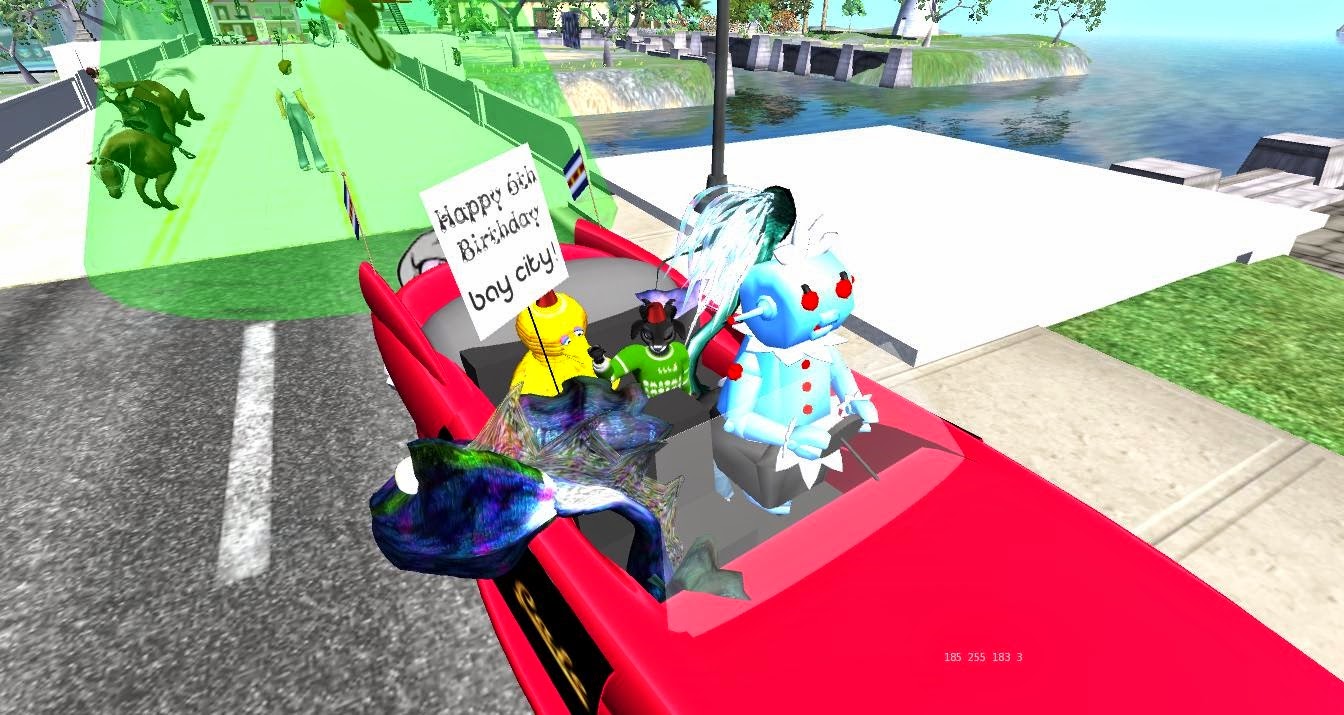 I took numerous pictures of the citizens and the floats. Marianne Mccann played a huge horn as she marched. Pygar Bu waved the flags proudly. Vic Forcella, with burning hair, announced they had they best team! 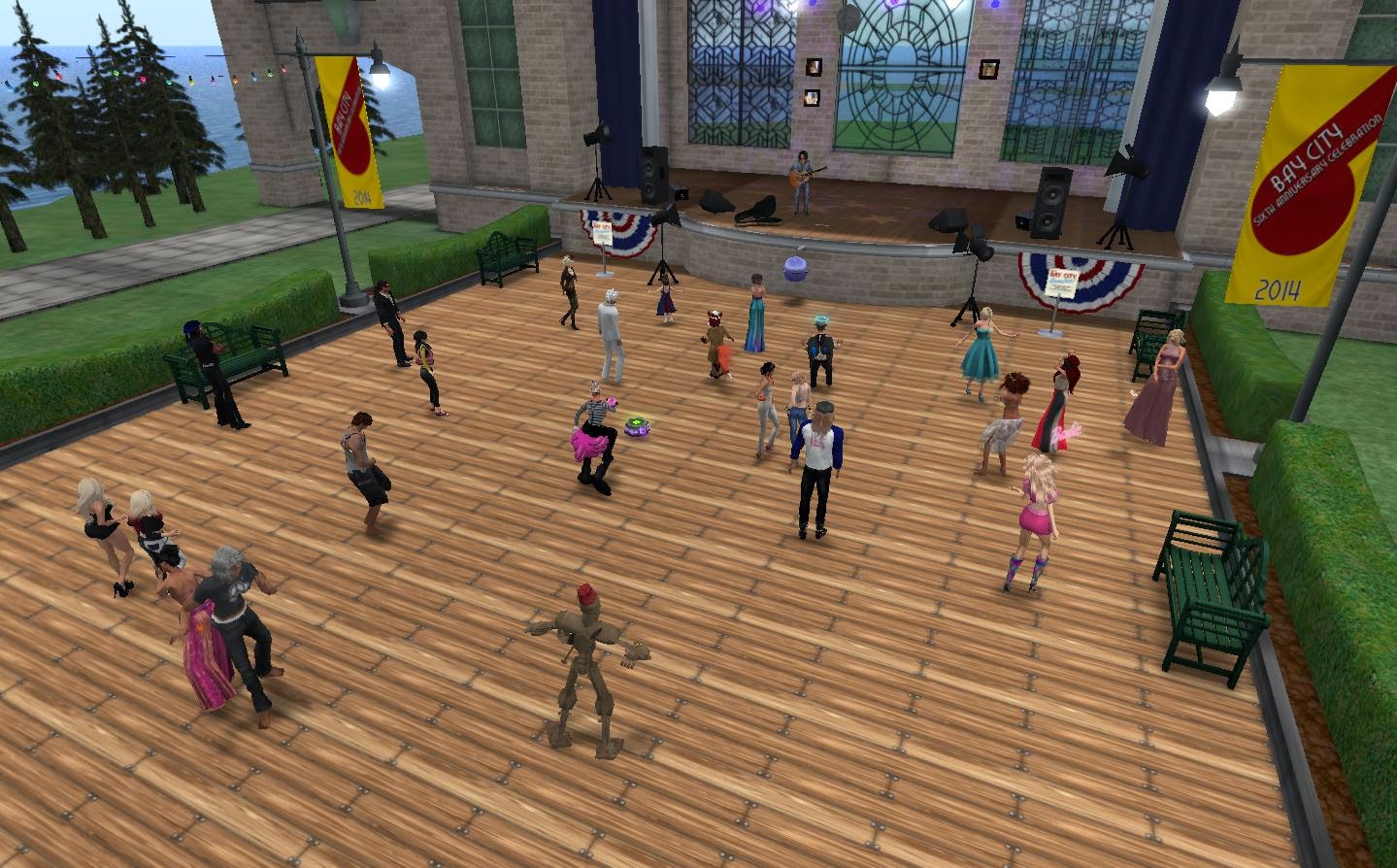 Everyone worked hard on this parade and it was a great one. It terminated at the fairgrounds with enormous lag as everyone rushed into the party area. But finally we got to the dance floor and listened to the music of Christov Kohnke.

Great fun for all! 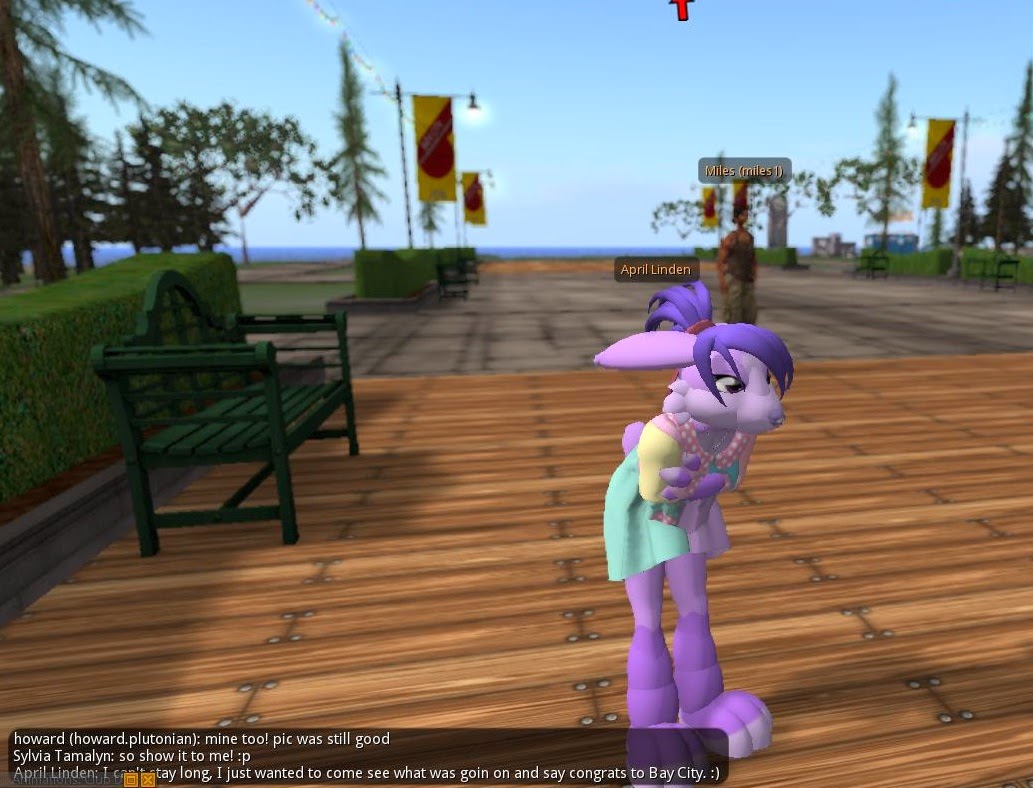 Editor's Note: Arriving at the tail end of the event, I caught a surprise. One of the Lindens had dropped in: April Linden. "Heya!" she greeted us, "I can't stay long, I just wanted to come see what was goin on and say congrats to Bay City. (smile)" April was in a furry bunnygirl av, which got complements from the crowd, "April, aren't you an adorable little rabbit. Oh and you're a Linden too. Nice to meet ya!"

I had time to ask her a couple questions, "How's Ebbe doing?" "I've only seen him in passing, but seems to be a very nice fellow." "Word has it Ebbe's been encouraging the Lindens to interact with the residents more." "That is correct. (smile)." But she soon had to depart, "Bye everyone!! Yay Bay City!! (smile)" She waved, and ported out. 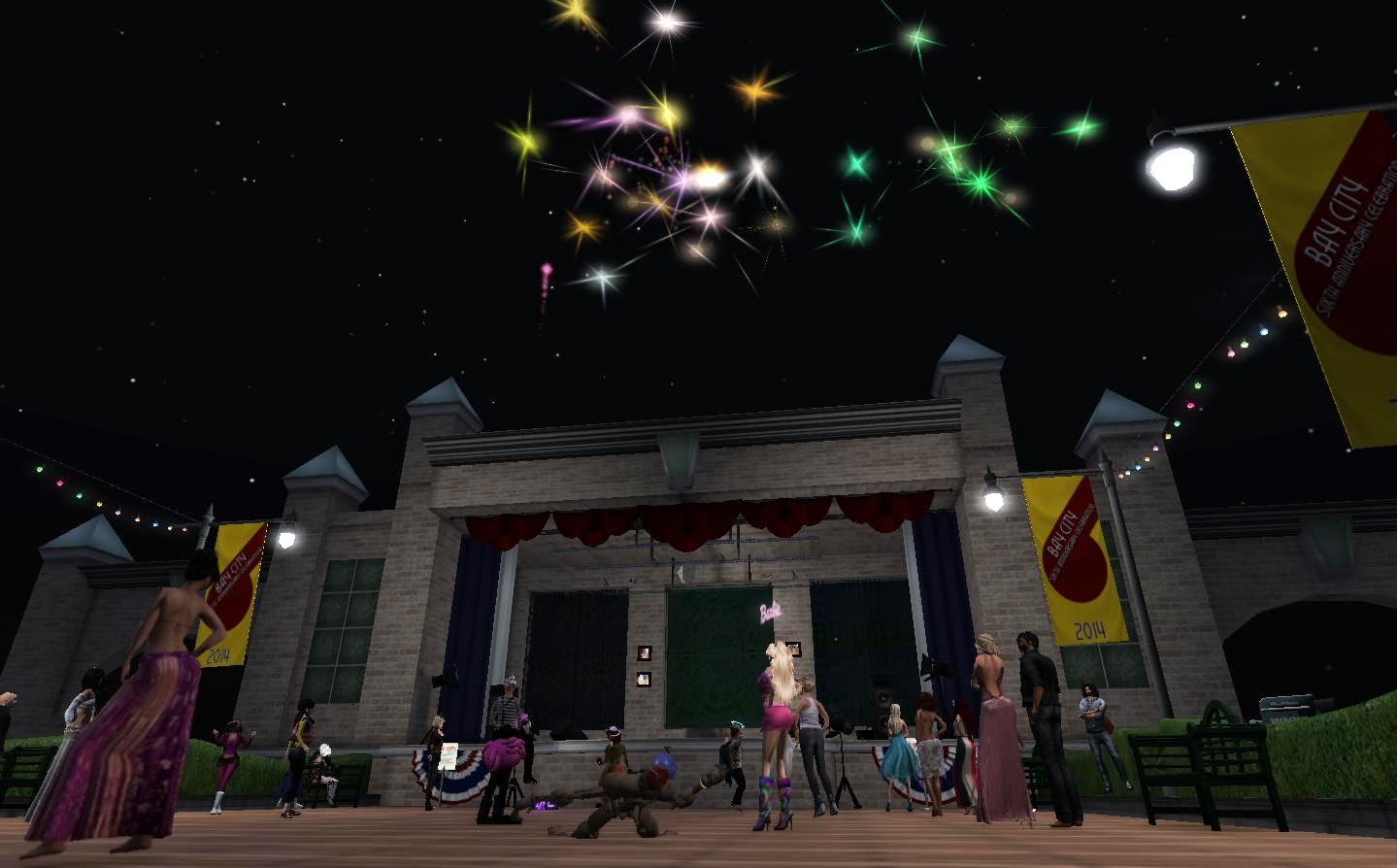 As the last musician finished his set, Marianne McCann directed everyone's attention to the sky. We then saw fireworks going off. The crowd cheered, "Yay for Marianne!" "(gigglemews) Mari wants BIG BOOM!" "Woot Woot!" "Yaaaaaaaaay!" Marianne called out, "Happy Sixth Anniversary Bay City! ... And to Ever Dreamscape, It was a honor to know you!"

People talked on about the late Ever Dreamscape. Uccie commented, "It was an honor to have Ever sneak into my house and scare the crap out of me. .... we need a Fire Day for Ever. Someone pick one." People suggested her rezzday or her birthday. Uccie reminded, "April 1 is her birthday." So Marianne decreed, "The 1st of April will be Ever's Night."

And so, the place that was built to represent the mid-20th Century North American urban experience had ended it's Sixth Anniversary. This time it was to both celebrate what they accomplished, and to say goodbye to a friend whom would be remembered.

For more pictures, check out ZZBottom's and Daniel Voyager's Flickr accounts.
Posted by Bixyl Shuftan at 6:00 AM